It is hard to imagine anyone having such an influence on one club as Johan Cruyff has had on Barcelona. His first contact with the club began as a player back in 1973, when he joined following an extraordinary spell at Ajax that saw him, amongst many other achievements, win an outstanding three European Cups.

Joining for a then world record fee of six million guilders, he'd go on to leave an indelible mark on the Catalan giants' history. Under legendary manager Rinus Michels, whom he worked so successfully with at Ajax, Cruyff and the intelligent tactician were instrumental in instilling their thrilling philosophy into the side. 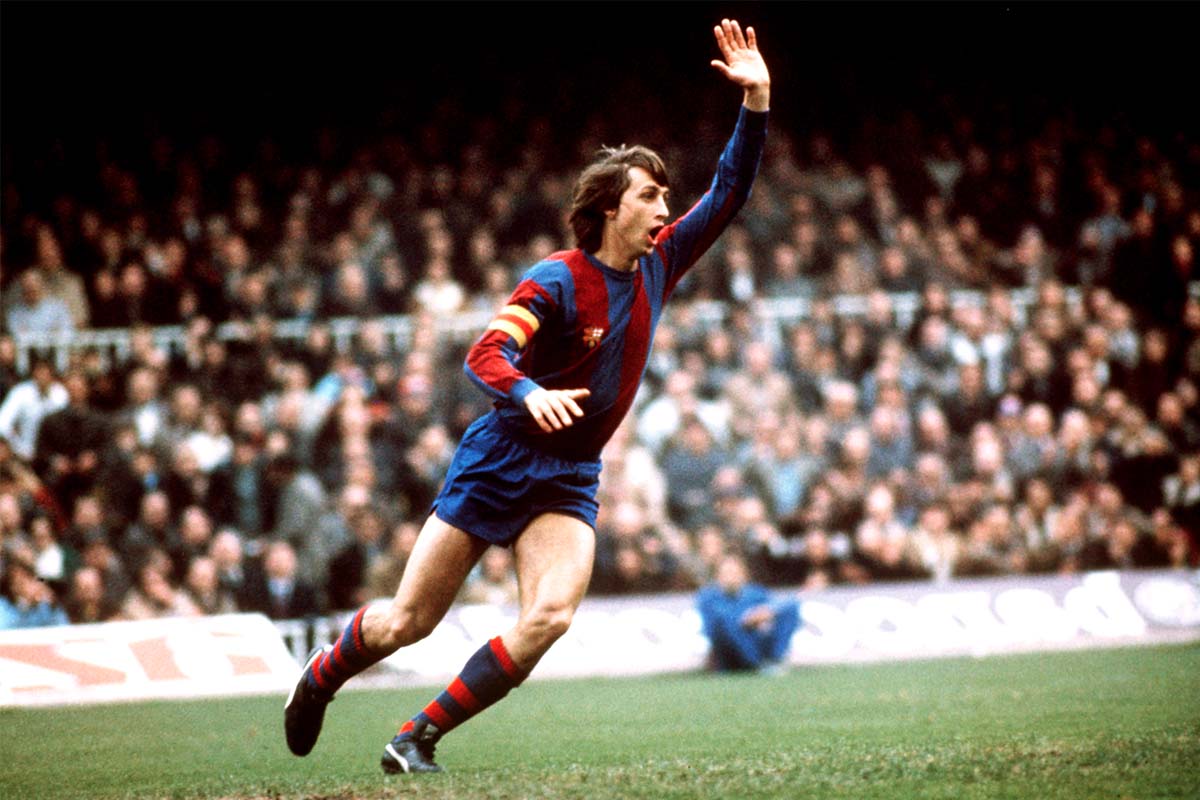 When Cruyff and Michels arrived at Barça, they were in a colossal rut and remarkably hadn't won the league in 14 years. To say change was needed was indeed a gross understatement. But thanks largely to the tactically sophisticated duo, who so masterfully implemented their iconic style of Total Football, they managed to turn things around.

Cruyff had to sit out the opening stages of the 1973/1974 campaign, however, before finally being ruled eligible to play once Spain's ban on foreign players was lifted. By that juncture, though, Barça were in real strife: they'd only won two of their first seven league games, had already exited the UEFA Cup and found themselves languishing around the relegation zone.

“We had gone 14 years without winning the league and culés had started to despair,” lamented teammate Charly Rexach when speaking to Sid Lowe. “And then Cruyff arrived.”

In what was an omen for things to come, Cruyff put in a mesmerising display on his Barça debut, leading his side to an emphatic 4-0 win over Granada on 28 October.

Thereafter, Barça went on a phenomenal 26-match unbeaten streak, with the genius of Cruyff shining brightly. He supplied barely believably assists, scored goals and played his football with his customary swagger and style that excited fans the world over.

By the time the Clasico against Real Madrid rolled around in February, Michels' men were nigh on unstoppable and duly smashed Los Merengues 5-0, in what was arguably the biggest highpoint of their sensational season. They then steamed ahead to secure their first league title since 1960 with five games to spare following a 4-2 trouncing of Sporting Gijon at the Molinon.

Cruyff was deservedly crowned FIFA World Player of the Year for 1974 after his magical exploits for club and country.

Former teammate Juan Manuel Asensi summed up Cruyff's influence brilliantly, stating: “Cruyff was a sensational player. He was also a winner. The change in mentality was brutal. It was like we had been drowning and now we were pulled out of the water.”

The renowned football historian Jimmy Burns added: “With Cruyff, the team felt they couldn’t lose. He gave them speed, flexibility and a sense of themselves.”

Although this was to be his only title in five years at Barça, his presence revolutionised Barcelona forever, giving the club a clear sense of identity and an entertaining to philosophy to follow.

In 1988, ten years after his final appearance for the Blaugrana, Cruyff rejoined his beloved club to take over as manager. The picture was far from pretty, though, for the club was in a shocking state and in urgent need of a saviour.

“When Cruyff took over as manager in 1988, Barcelona were a club in debt and in crisis. Results were bad, performances were worse, the atmosphere terrible and attendances down,” noted Lowe in his fascinating book Fear and Loathing in La Liga.

Thankfully Cruyff was the man to lift them out of the mire. Inherently, it took a while for him to get things back on the right path, but the passionate, meticulous, hard-working Dutchman did so with aplomb. 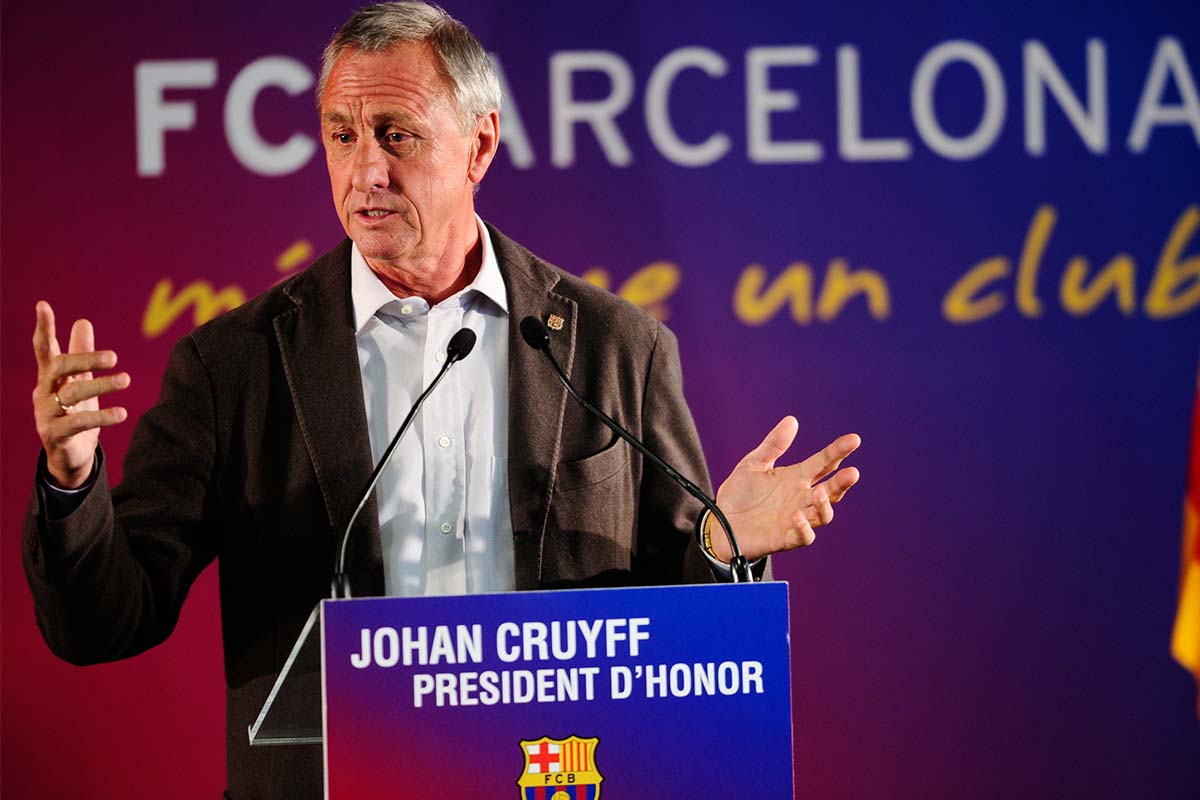 Although the players were a little uneasy at first with Cruyff's decision to play a very attacking 3-4-3 formation, once they began seeing its benefits and how well Cruyff implemented and explained the system, they were duly won over. “He got a blackboard and drew three defenders, four midfielders, two out-and-out wingers and a centre-forward,” recalls former player and now Real Sociedad manager Eusebio Sacristan .

“We looked at each other and said: ‘What the hell is this?!’ This was the era of 4-4-2 or 3-5-2. We couldn’t believe how many attackers were in the team, and how few defenders. He single-handedly introduced a new way of playing football in Spain. It was a revolution.”

Eusebio then went on to detail how Cruyff's incessantly thorough methods were a real eye opener, saying: “He used to stop every session four or five times and correct our positioning: ‘No, no! Not there. One metre more to the right. Now look: you have a much better angle for the pass. It wasn’t there before’.

“These tiny details make you think. They stay with you, and in the end you join the dots between each passage of play. There’s no other coach who could explain that to you, because he was the best in the world as a player. Built up over years they form a huge part of your skills.”

With many of the media quick to criticise Cruyff's then radical philosophy, he immediately snapped back at them, emphatically letting him know under no uncertain terms what he thought: “I was criticised for playing three at the back, but that’s the most idiotic thing I’ve ever heard. What we needed was to fill the middle of the pitch with players where we needed it most. I much prefer to win 5-4 than 1-0.”

His magnificent results as a manager spoke for themselves, for his success at Barcelona was nothing short of spectacular, in a spell where he beautifully rekindled the club's lost identity.

Winning four league titles in a row and the club's first ever European Cup, against Sampdoria in 1992, was indeed a fitting testament to the quality of his work while in charge at the Camp Nou. Stylish, imposing, exhaustive and exhilarating, Cruyff's Dream Team were a joy to watch and crucially combined aesthetics with results.

Moreover, the sweeping changes he made within Barça's famed academy, La Masia, to ensure the club's philosophy and ideas were taught from the top down has facilitated the development of some extraordinarily talented players, such as Xavi, Andres Iniesta and Lionel Messi.

Although his time as manager ended on a sour note, with him falling out with president Josep Lluis Nuñez in 1996, which ultimately led to his sacking, Cruyff's eight-year spell with the Catalans made him the longest serving and most successful manager in the club's history.

Indeed, winning 242 of his 387 matches aptly evidenced the mastery of his time in charge. Even though his great friend Guardiola surpassed his 11 trophies by winning 15, Cruyff's work unquestionably shaped the club into what it is today.

With the devastating passing of Cruyff this year, Barcelona will be forever grateful for everything he did to transform them into arguably the most iconic and symbolic team in world football.

Former disciple, Guardiola, who credits Cruyff for so much of his tremendous success in the game, offered a fitting tribute to his former friend. “Nothing in football would be possible without the arrival and the unequalled charisma and talent of Johan Cruyff,” he philosophically said.

“I knew nothing about football until I met Cruyff. It's a great loss. We will not be able to see him when we would like to, but his legacy remains. Those that experienced it were fortunate to be able to enjoy him directly and personally and he has left many things.”

Furthermore, current Barça midfielder, Denis Suarez, aptly described the lasting impact of Cruyff's methods, insisting: “Barça hasn’t come about in two years. It’s years of building an identity, staying faithful to a philosophy, the kids in the academy playing like the first team.”

After all he did for his beloved Barcelona, Cruyff's unmistakable legacy will rightly live on forever in the hearts of fans, not only in Catalonia, but all over the world.