Few clubs have such a grand tradition of developing and giving chances to young players as Manchester United. Whether it was the Busby Babes, Fergie’s Fledglings or Marcus Rashford’s recent rise to stardom, Old Trafford has been the theatre of so many teenage dreams over the years.

After the early- to mid-1990s boom which saw the likes of Ryan Giggs, David Beckham, Paul Scholes and the Neville brothers break into the United first-team, there has been more of a slow drip of academy graduates making their way up the ranks an into the senior side, with varying degrees of success.

Some, such as Federico Macheda and Adnan Januzaj burned brightly and faded quickly, while Danny Welbeck and Tom Cleverley became semi-regular starters before leaving the club to seek first-team football elsewhere.

The Red Devils have had their regrets over the years too, letting Gerard Pique return to Barcelona where he developed into one of the finest centre-backs of his generation, and allowing Paul Pogba to leave the club only to spend a world record £89million to bring him back to Old Trafford four years later.

Becoming a first-team star takes a combination of talent, hard work and luck for any young academy hopeful. It’s nearly impossible to predict which budding prodigies will eventually make the grade – for example, Ravel Morrison was once regarded as a brighter prospect than Pogba, he plays for Queens Park Rangers in the Championship now.

However, there are a handful of youngsters currently honing their craft in United’s junior ranks who have got every chance of someday staking their claim for a place under the Old Trafford floodlights.

The brightest spark in the United youth set up right now is unquestionably 16-year-old Angel Gomes.

The diminutive teenager, who’s Portuguese father was a journeyman footballer in his day, is blessed with tremendous dribbling skills, cool finishing and an eye for a killer pass.

Capable of playing anywhere along the front line, the versatile youngster is at his best when playing as a No.10, where his close control and ability to burst away from his marker opens up space for himself and his team-mates.

In the week of his 16th birthday back in August last year, Gomes bagged a hat-trick for the United under-18s against Everton and also captained the England junior side.

With his pace and low centre of gravity, Gomes has been compared to Lionel Messi, and Barcelona are said to be monitoring his progress with a view to stealing him away to Catalonia at some point in the future.

Gomes joined the Red Devils as a 13-year-old and incredibly made his debut for the under-18 side when he was just 14.

There are high expectations for Gomes at Old Trafford, but the teenager doesn’t feel the pressure and instead remains focussed on his goals.

“In five years time, I would like to be playing professionally for Manchester United,” he said.

“Winning title's is huge for me. I want to play international football, play in World Cups and European Championships.

“I want to be the best player at my age level. I set myself high standards and try to push myself to play at the highest level.”

Already a regular at under-23 level, centre-back Axel Tuanzebe’s next step is to crack the United first-team.

He made his senior debut for the Red Devils in their FA Cup 3rd round victory over Wigan Athletic at Old Trafford in January, coming on to replace Timothy Fosu-Mensah in the 68th minute. Having gotten a taste of first-team action, Tuanzebe will be desperate for more.

Born in the Democratic Republic of Congo, Tuanzebe moved to England at an early age, growing up in Rochdale, and has represented the Three Lions at under-20 level.

Standing at 6’1” and still growing, the powerful 19-year-old cuts a physically imposing figure. He is also extremely athletic, capable of coving ground quickly and leaping high to contest aerial duels.

Tuanzebe, as is expected of a modern centre-back, is comfortable on the ball and a safe pair of hands in possession, something that will be crucial to his hopes of succeeding at United.

When Eric Bailly travelled to Gabon to take part in the Africa Cup of Nations with Ivory Coast in January, many United fans were hopeful that Tuanzebe would be given an opportunity to deputise for the £30million former Villarreal man.

However, the form of Phil Jones and Marcos Rojo conspired against the youngster’s immediate first-team hopes, meaning that substitute’s appearance against Wigan remains his sole senior outing.

That won’t be the case for long, though. Already on manager Jose Mourinho’s radar, Tuanzebe can expect to be more involved next season.

Lightning fast with excellent close control, what really makes Chong stand out – aside from his long, bushy hair – is his ability to change direction in the blink of an eye. He can be bursting forward at pace down the flank and then, before his marker knows what has happened, he has turned on a sixpence and sped off in the other direction. 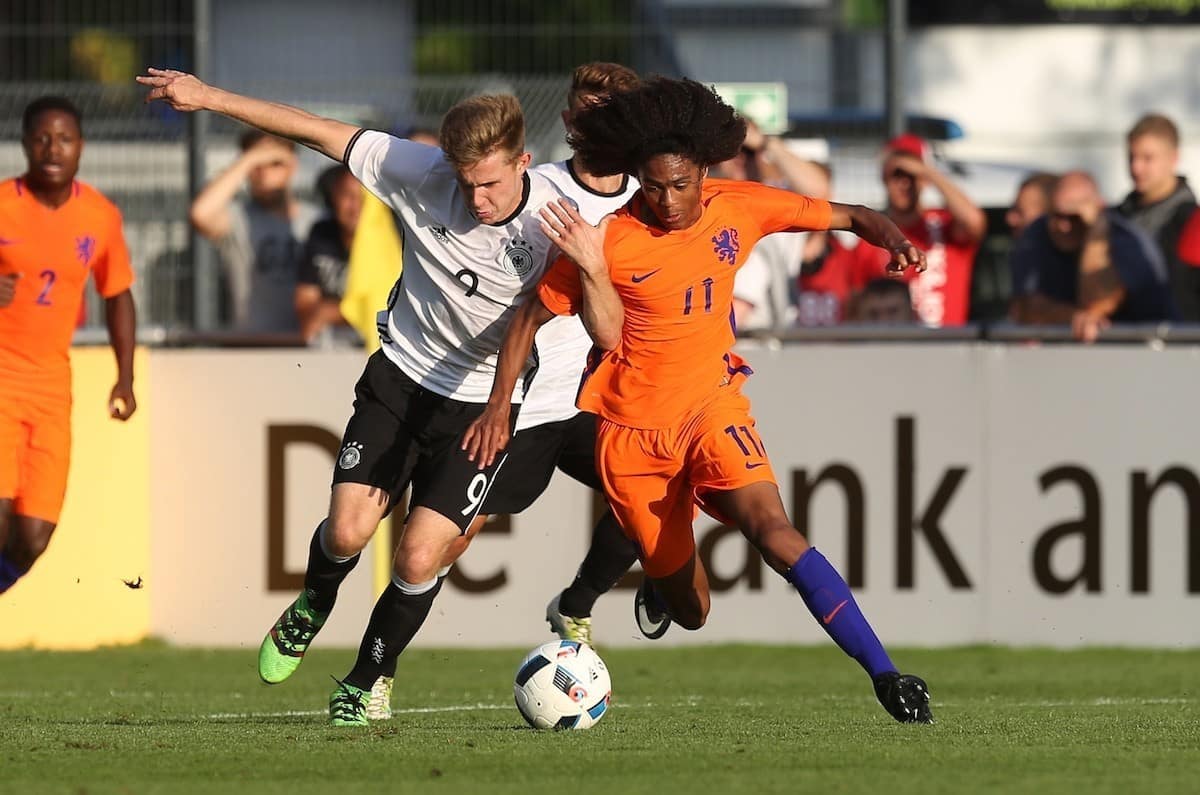 Although he is left footed, Chong can play on either wing, acting as a conventional winger on the left, taking on opposition defenders around the outside and looking to play a cross into the area, or acting as an inside forward on the right, cutting in onto his stronger foot and linking with central colleagues.

With Mournho watching on, Chong came off the bench in December’s FA Youth Cup tie against Southampton to set up a chance for Ethan Hamilton with a clever backheel, before later smashing the ball into the top corner from inside the box to score.

United may have lost the game 2-1, but Mourinho will have noted Chong’s impact.

Belgian midfielder Indy Boonen, like Gomes, is the son of a former professional footballer. But the youngster’s father, Jacky, is under no illusions as to where the real talent lies in the family: “I used to play for Lierse, Lokeren and Beveren but my son is a much bigger talent,” he said.

Labelled the “new Ryan Giggs” thanks to his electrifying dribbling ability and individual skill, Boonen has featured heavily on the left wing since he joined United in 2015, but is also capable of playing centrally, where his vision, passing ability and superb technique really comes to the fore.

The 18-year-old has already been involved with the under-23 squad, and hopes to soon emulate his good friend Marcus Rashford.

“They say you never know when you are close to the first team,” he told Voetbal Krant last year.

“Even with Marcus, they did not say that he was getting close to it.

“He really is a top player, I had a very good relationship with him. We blindly found each other in matches and in training.”

A hat-trick for United’s academy side against Liverpool in October last year helped earn 19-year-old Callum Gribbin promotion to the under-23 squad.

The Salford-born prodigy has drawn comparisons to a young Cristiano Ronaldo thanks to his quick feet and dazzling dribbling skills. However, Gribbin’s playing style is perhaps more reminiscent of current Old Trafford star Henrikh Mkhitaryan.

Capable of playing wide but at his best in a No.10 role, Gribbin, Like Mkhitaryan, is able to combine mesmerising runs with accurate and incisive forward passes. Deadly from set-pieces, the teenager is not yet a prolific scorer, but he is more than capable of producing moments of brilliance to unlock even the most stubborn of defences.

United’s under-23 side suffered a disappointing 5-3 loss at the hands of Derby County last month, handing the Rams their first win in three months, but Gribbin was able to hold his head up high thanks to he personal performance that night.

A trademark free-kick saw him get his name on the scoresheet, and he later set up Tosin Kehinde to score United’s third.

The Ibrahimovic Effect: How Zlatan Has Transformed Manchester United