“Paolo Maldini was the best and toughest defender I ever faced, he had everything,” Zlatan Ibrahimovic told La Gazetta dello Sport back in 2014. “He was a complete defender who was strong, intelligent and an excellent man-marker.” The Swedish striker has been outspoken and made many surprising statements, but his analysis of the retired AC Milan Captain could not be more accurate.

The new Manchester United star would not hear many arguments against his opinion of Maldini, widely regarded as the finest defender of his generation. A legend among legends he is also considered the world’s greatest ever left-back and has played more games in Serie A than any other player (647). 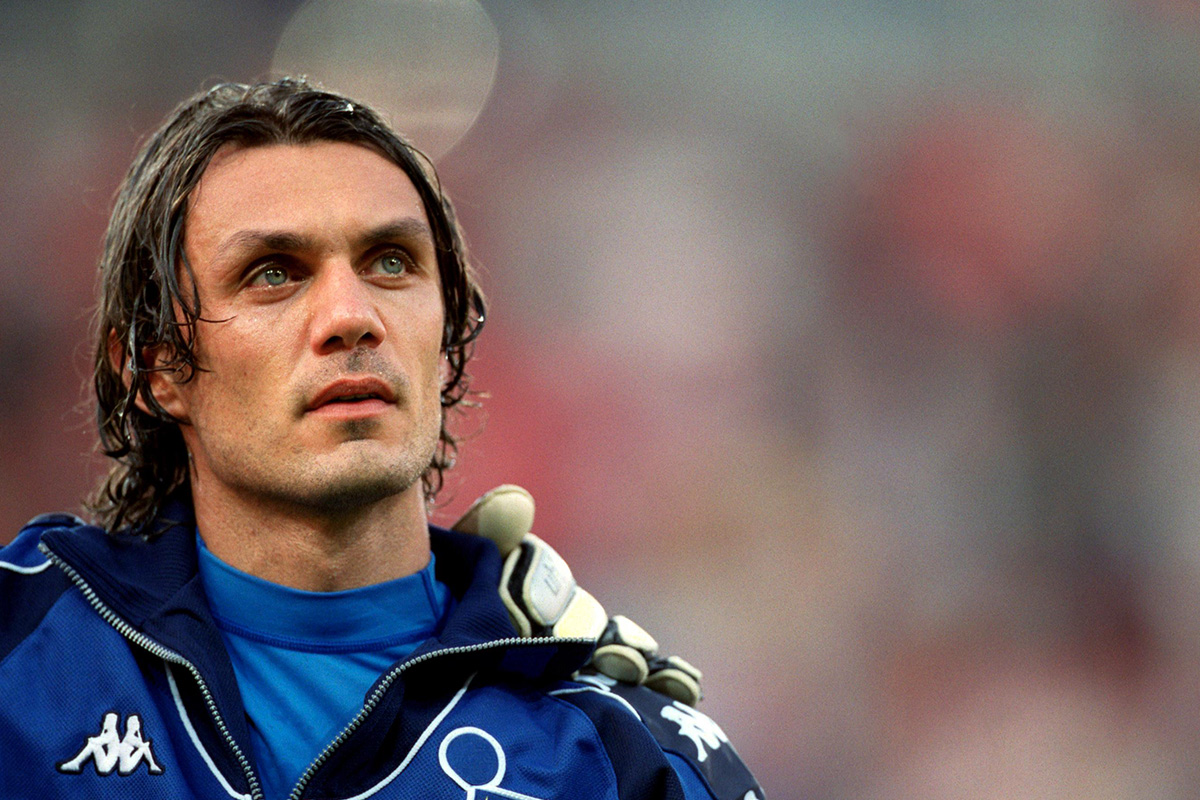 Flawless. It was tempting to begin and end this section with just that single word, but Maldini’s wonderful career deserves to be discussed in much greater detail  He began his career with Milan – the team once Captained by his European Cup-winning father Cesare – as a young boy, progressing through the youth ranks as an impressive right-back, with Arrigo Sacchi only shifting him to the opposite flank after his debut.

Watching him perform there or indeed as a central defender later in his career was to witness perfect technical skill, athleticism, stamina and composure, although his early years were also punctuated with an uniquely adept ability to execute expertly timed sliding tackles. His passing was vastly underrated by the wider footballing audience, while he also had a knack of scoring goals that also went under-appreciated, netting in all but three of his 24 full seasons as a professional.

Where to begin? Retiring at the age of 41 in 2009 – disgustingly booed by his own supporters who believed he had sided with owner Silvio Berlusconi too many times – Maldini’s rise to prominence ran concurrent to Milan’s climb back into the ascendancy. His debut at the age of 17 came in the season after the Rossoneri returned to Serie A, relegated twice in quick succession during the early 1980s, but after Silvio Berlusconi bought the club and appointed Sacchi as Coach, the young defender would win his first league title by 1988.

No fewer than 25 further trophies would follow, a staggering five Champions League triumphs were surpassed only by six more Serie A trophies. Maldini would also lift the Supercoppa Italiana and European Super Cup on five occasions each, also clinching two Intercontinental Cups and one FIFA Club World Cup.

For the Italian national team – with whom he debuted 1988 – he would fail to claim a trophy but did register a then record 126 caps before his 2002 retirement from international football. That was an Azzurri high that has since been surpassed by both Fabio Cannavaro and Gigi Buffon, but Maldini was Captain of the side for eight years and wore the armband for a staggering 74 games.

Playing in three European Championships and four World Cups, he reached the final in each competition, beaten on penalties by Brazil in 1994 and a French Golden Goal at Euro 2000. On a personal level, he won the UEFA Best Defender award at the age of 39 and was named Serie A Defender of the Year Award in 2004. Almost a decade earlier, he was named second to team-mate George Weah as FIFA World Player of the Year while also claiming third place in Ballon d'Or voting in both 1994 and 2003.

If the span of those awards was testament to his longevity, then so too are his records for most Serie A appearances and most appearances for Milan, playing a staggering 902 matches. It is no surprise that the club opted to retire the number 3 shirt in his honour when Maldini finally called time on his spectacular career. 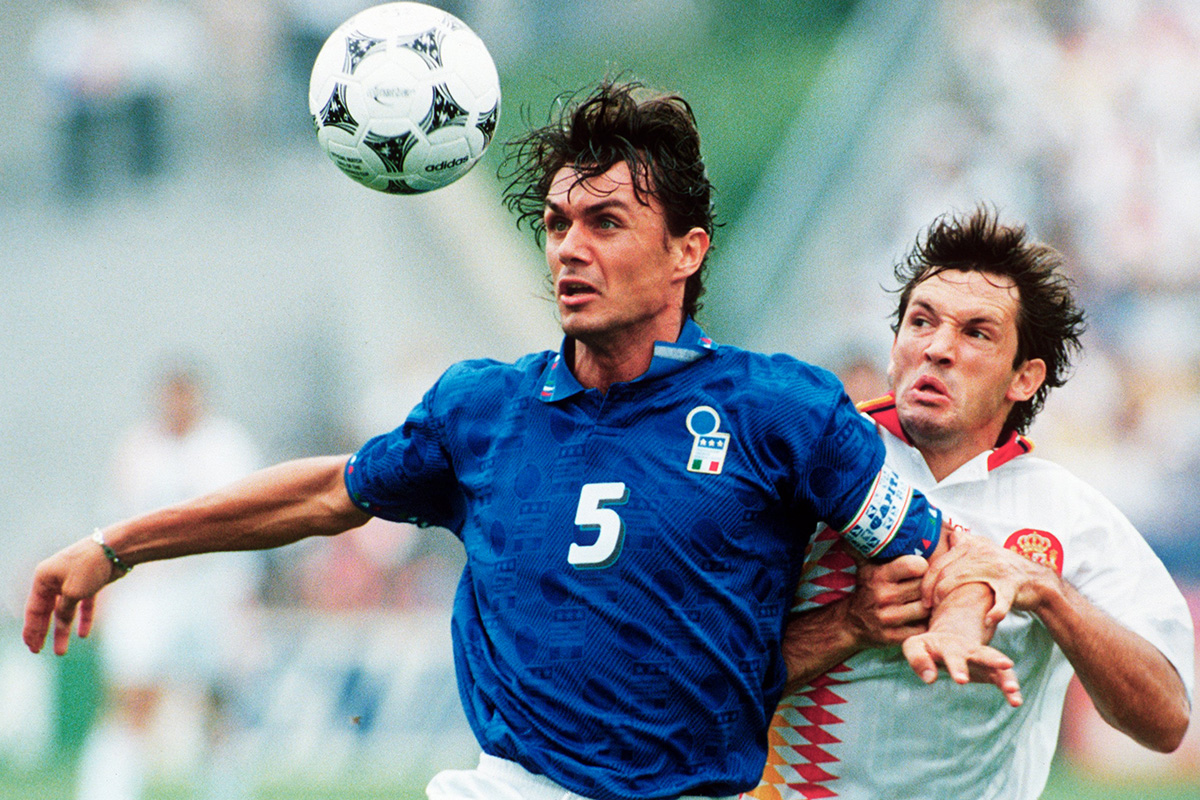 “Barcelona are favourites,” Johan Cruyff said before the 1994 Champions League Final. “We're more complete, competitive and experienced than at Wembley [where his side had triumphed two years earlier]. Milan are nothing out of this world. They base their game on defence, we base ours on attack.”

Nobody doubted the Barca Coach. His team had won an incredible four consecutive La Liga titles when he made those comments while Ruud Gullit, Marco van Basten and Frank Rijkaard had all left the Rossoneri. While the Catalan giants could call upon a star studded lineup, Fabio Capello’s Milan were also forced to play without both Billy Costacurta and Franco Baresi.

Those two central defenders were suspended for the showpiece event in Athens, prompting Milan to pair veteran Filippo Galli with Maldini, the latter shifted into a central role for one of the few times in his career until that point. Faced with the might of their opponents that makeshift duo was expected to flounder but they thrived, barely giving Romário and Hristo Stoichkov a sniff of goal.

The Barcelona side were dubbed “The Dream Team” but they would endure a nightmare in this clash, Daniele Massaro grabbing two first half goals before Dejan Savicevic scored a glorious lob just moments after the break. Marcel Desailly grabbed a fourth goal and Cruyff’s pre-match proclamation rendered utterly foolhardy as the legend of Paolo Maldini began.

Considered to have been one of the greatest defenders of all time and known across the globe for not only his own brilliant play, but also a commanding presence on the pitch that helped organise, motivate and inspire his team mates while striking fear into opposition attackers. The fact Maldini ranks “only”  third on this list is not in any way a slight on him, merely a reflection of the greatness of two other Italians.