To be above Paolo Maldini in this list takes a truly special defender and one of the only men to do so is his mentor Franco Baresi, a wonderful sweeper who learned to play in a four-man defence very quickly and remained head and shoulders above his peers. Combining tough tackling with graceful distribution, he was a shining beacon of professionalism and rationale in a sport often found lacking in both.

Overcoming the loss of both parents while only 16 years old, he was rejected by Inter before opting to join cross town rivals AC Milan, the club that would become his home for life. “Training, hard work and an excellent relationship with supporters are guiding principles that should never be taken lightly,” he once noted, and he would embody each of those attributes throughout his career. 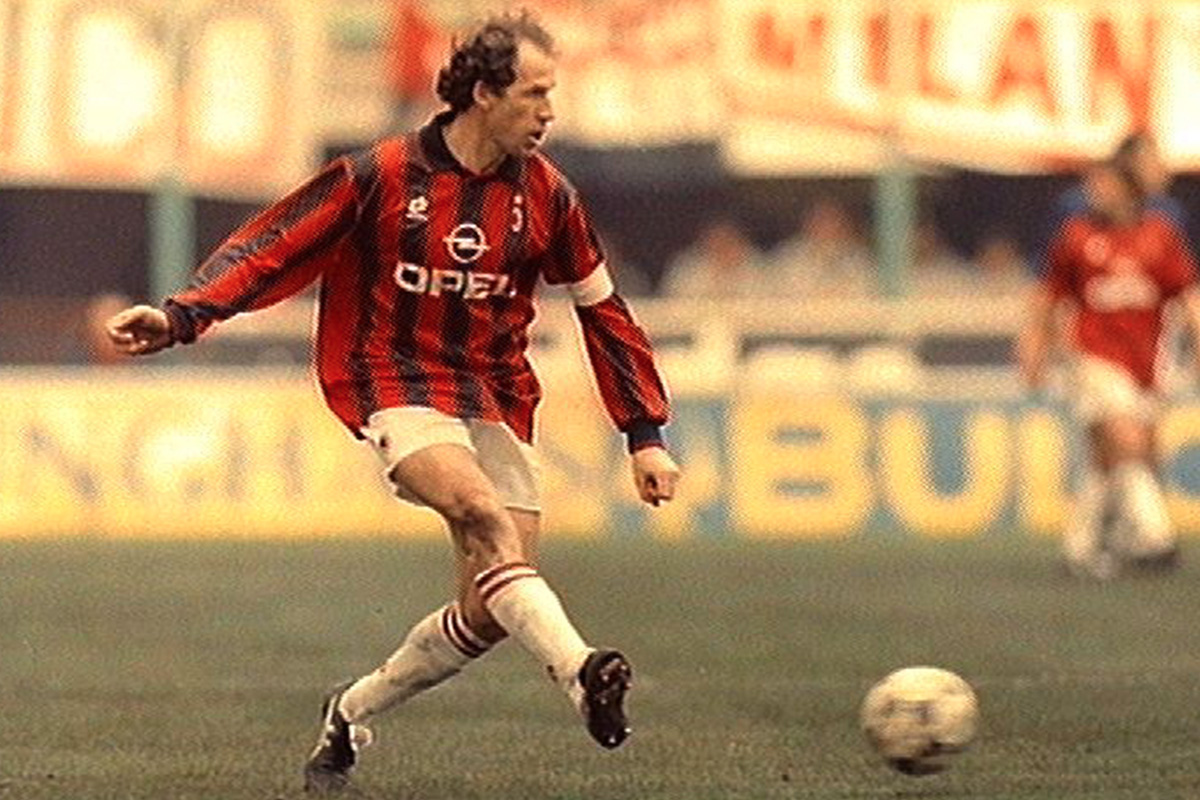 David Platt was one of the first players to begin the act of swapping shirts with opponents, and his comments after doing so with the Milan legend perhaps give the most insight into how he played the game. The English midfielder noted that while most of the jerseys he collected stank of sweat, Baresi's number six instead smelled only of the Aramis perfume he always wore.

That perfectly encapsulates Baresi’s cool playing style; rarely flustered and never rushed, he played the game with a grace of ease that was later seen in Alessandro Nesta but that was always a hallmark of his famous predecessor.”Baresi is blessed with a unique style, arrogant, imperious, sometimes ruthless,” the great journalist Gianni Brera surmised, and watching him stroll around the pitch it is impossible to disagree with that view.

Baresi was not tall but was rarely beaten in the air, was not quick but hardly ever got out-paced, his ability to read the game always keeping him ahead of opposition strikers. A complete and extremely consistent defender, his passing range, technical ability, and ball control allowed him to launch attacking plays from the heart of the backline.

When Milan were relegated to Serie B for their involvement in a betting scandal that also famously saw Paolo Rossi suspended, Baresi was the one player who remained above suspicion, opting to stay with the Rossoneri even after they lost their top flight status.

That decision saw him begin a legend that continued as he was named club Captain at the age of 22 and he would never leave the San Siro giants at any point in a career spanning three different decades. Soon after, Silvio Berlusconi took control of the club and appointed Arrigo Sacchi, the Coach ushering in a new era that saw the likes of Frank Rijkaard, Ruud Gullit and Marco van Basten join Baresi.

During his distinguished tenure with the armband, he would win six Serie A titles, two Intercontinental Cups and three European Cup/Champions League crowns including back-to-back triumphs in 1989 and 1990. Baresi would also help Milan claim three UEFA Super Cups and four    Supercoppa Italiana to round out an impressive medal collection.

He would be finish runner up in the 1989 Ballon d’Or voting and is one of very few Serie A players to ever see his shirt number retired. In 1997 – after twenty years of flawless performances – he would retire, the then-37 year old saying he had found his final campaign difficult due to a series of niggling injuries. Two years later, Rossoneri fans would name him their player of the century. 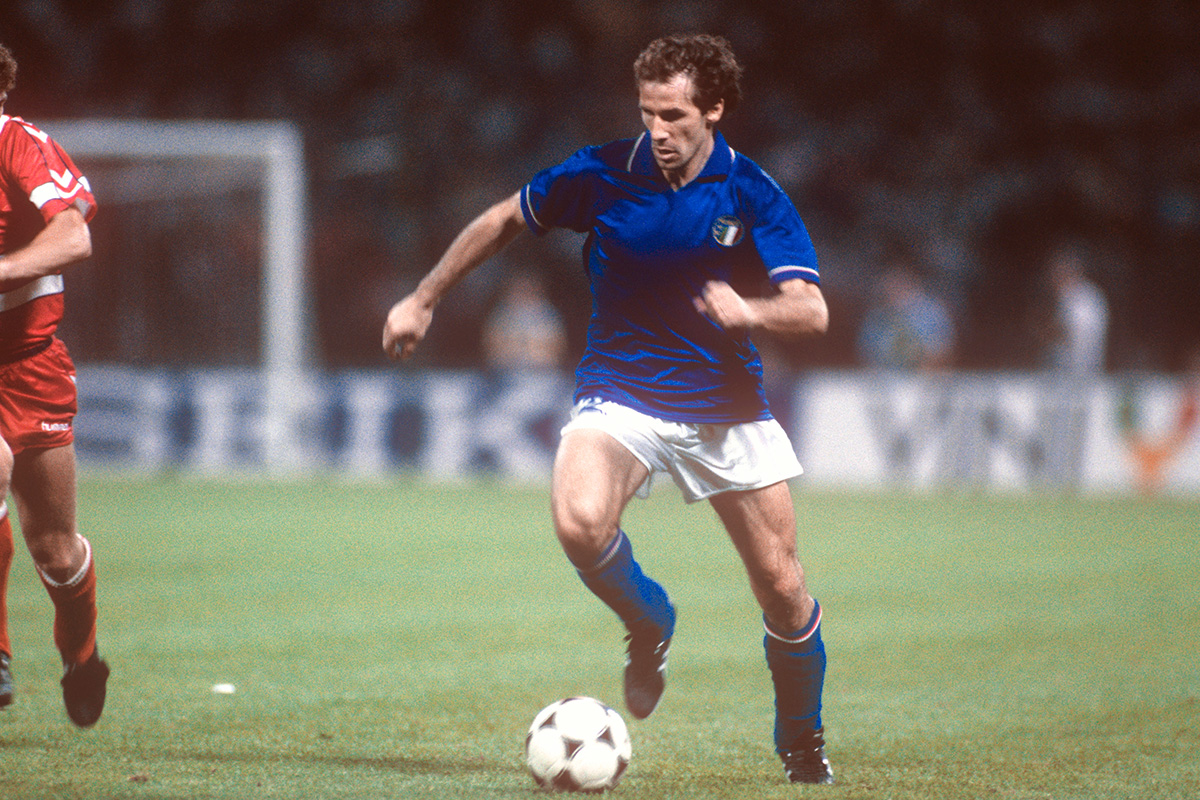 While Baresi will be forever synonymous with the red and black stripes of Milan, perhaps he will forever be remembered for his exploits with the Italian national team. An unused reserve as the Azzurri clinched the 1982 World Cup, the following few years would see him struggle to break into the side under Enzo Bearzot, his actual international debut not coming until December of that same year.

When he did play, he was bizarrely deployed as a defensive midfielder, with the Coach often preferring his brother Beppe in that role. That meant he barely made much of an impact until Bearzot was replaced by Azeglio Vicini who immediately put him back into central defence.

In his natural position, Baresi shone, helping the host nation set a new record for minutes without conceding as they marched to the semi-final of Italia ’90. There they would be taken to a penalty shootout by Diego Maradona’s Argentina, with the Milan skipper slotting home his spot-kick but ultimately powerless to prevent his side being eliminated.

Four years later, he suffered a terrible injury in the group stage clash with Norway but returned to the starting XI for the Final against Brazil. With Romario and Bebeto in rare form, Baresi led the Azzurri defence flawlessly in the Pasadena heat, holding the attack scoreless in a 0-0 draw that eventually led to yet another penalty shootout.

He would miss by firing high over the bar before Daniele Massaro and – most famously – Roberto Baggio then missed in a similar fashion to the Captain, handing the trophy to Brazil as Baresi burst into tears.

Baresi’s achievements see him stand out as the real leader of that great Milan side, playing 719 games with his final match – on October 28, 1997 – would see arguably the most fitting farewell any player has ever been handed. The likes of Carlo Ancelotti and Roberto Baggio joined Baresi to play alongside the Dutch Trio of Van Basten, Gullit and Rijkaard in the farewell match at San Siro, taking on a select XI which included Zico, Romario and many others.

Five minutes before the final whistle his famous number six was shown on the substitution board but the Rossoneri did not send on a player in his stead. The message was simple; Franco Baresi was irreplaceable.