When France were eliminated during qualifying for the 1994 World Cup in the USA, it seemed like they would never return to the great heights of the Carre Magique and Euro 84.

However, Les Bleus went away and planned their return to the top of football's pyramid. It paid off quicker than expected and they would lift the 1998 World Cup on home soil and then follow it up with Euro 2000 gold.

Graced with talent all over the pitch, French teams have dazzled us with amazing skill and technique, but blended that with discipline and organisation.

There have been ups and downs along the way, but there will always be players to admire in the famous blue jersey, so here's a look at just 10 of the greatest players to play for Les Bleus

When it mattered, the former Juventus man stepped up and delivered for his country. At Euro 2000, with the final heading to penalties, he swept his left-foot volley beyond Francesco Toldo to win the game with a stunning golden goal.

Outside of his tremendous club career, Trezegoal is still France's third all-time goal-scorer, with 34 goals in 71 games over a 10-year period. An incredible finisher with both feet, his movement and awareness in the penalty area is bettered by no one who has ever pulled on the French shirt – something for Antoine Griezmann to aspire to.

Often overlooked when recalling France's best players, Marius Tresor was ahead of his time and you can see in today's game the way he influenced modern day defenders.

When he joined AC Ajaccio in 1968 he was classed a centre-forward, but with his physicality and athleticism he was quickly moved into the defence. He is regarded as one of the best defenders to play for France and will be remembered for his wonder goal against Germany during the 1982 World Cup semi-final. 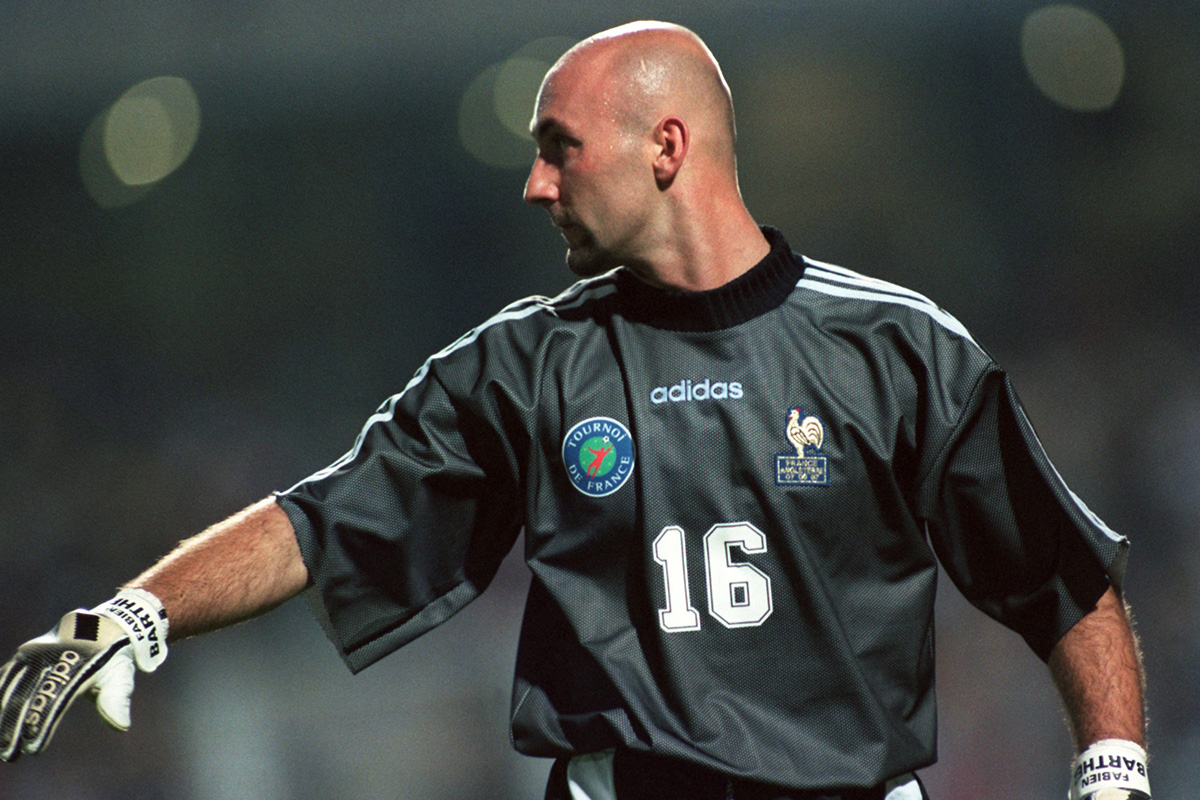 You could argue for days as to which goalkeeper deserves a place on this list. Joel Bats was for quite some time, France's best goalkeeper. He made a superb save to deny Zico from the penalty spot at the World Cup 82 and started between the posts as France won the 1984 European Championships.

However, no matter what you think of him, Barthez was immense for his country. He made crucial saves as they beat Paraguay 1-0 in the last 16 at France ‘98. Led his country past Italy on penalties and was there when it mattered in the final against Brazil.

Again, two years later, without the former Manchester United man, France wouldn't have lifted the Euro title. Eccentric and mad he definitely was, brilliant is how he will should be remembered.

“Deschamps gets by because he always gives 100 per cent, but he will never be anything more than a water carrier.” The words of Eric Cantona would mean more if the current France boss wasn't considered as one of their best ever midfielders.

He was never going to be a creative force, or a midfield talisman, but without his work-rate and industry, France wouldn't have found success at the World Cup. The amazingly talented attack played off the foundations that Deschamps built for them, and that sort of effort and contribution deserves all the credit he is given. You don't find players with 104 France caps on every street corner, regardless of what King Eric may think.

His record has stood for 58 years, and it will take an amazing effort for someone to beat Just Fontaine's return of 13 goals at a single World Cup.

With the tournament now extended to 32 teams, and probably again in the future, Fontaine's goals came in just six games, including four in the 6-3 third-place play-off victory over Germany. He scored 34 goals in 26 league games for Stade de Reims heading into the tournament, but no one foresaw what was to come. 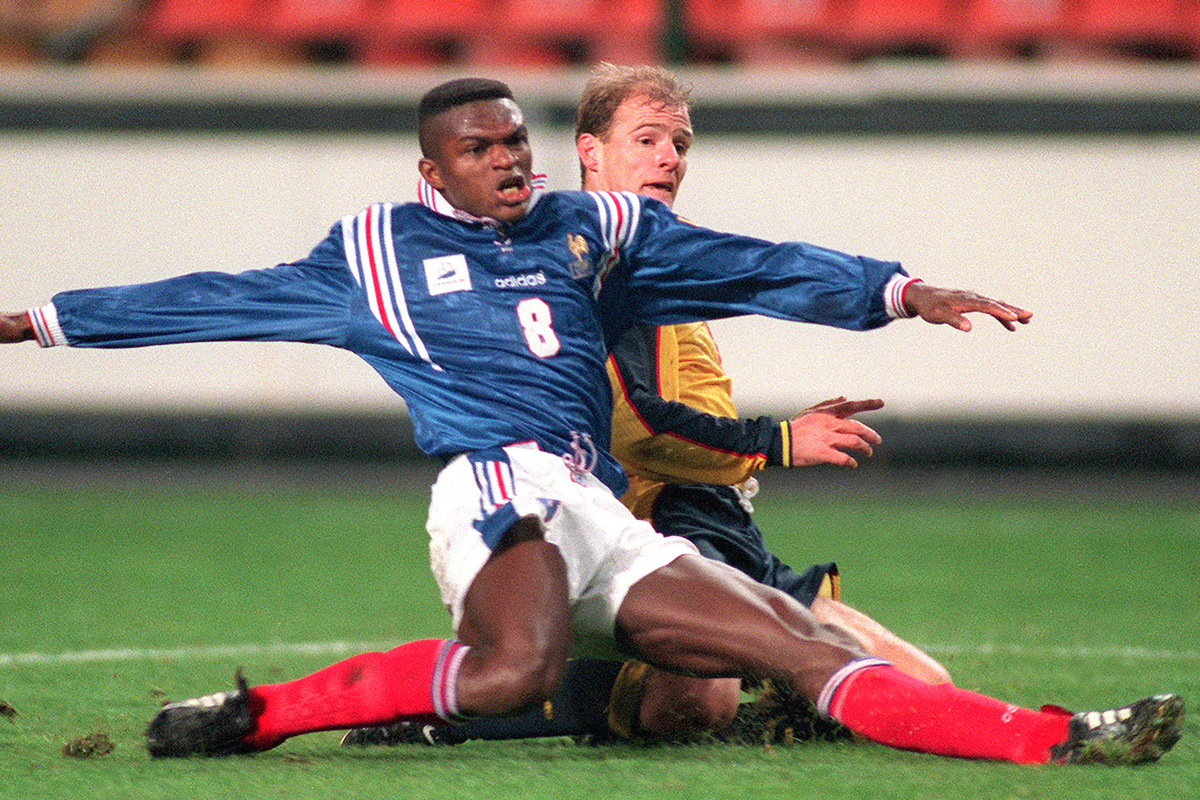 The original marauding centre-back, Marcel Desailly was France's all-action hero. Laurent Blanc gave you the no-nonsense approach, whereas Desailly was everywhere. He'd win the ball in the air, or slide into a challenge before grabbing the ball and driving France up the pitch.

He exudes that calm approach that would spread throughout the team and rarely did the former Chelsea man have a bad game throughout his 116 appearances. So many defenders or defensive midfielders now, like Kurt Zouma, get labelled as the “next Desailly”, but Marcel will always be a one-of-a-kind player.

He may have finished his career as an experienced central defender but Lilian Thuram was perhaps football's first attacking full-back, the type you see all over the game today – the only difference is, he could actually defend.

No one else has won as many caps for his country, finishing on 142, but none of the other 141 will ever match that sensational performance in the semi-final of the 1998 World Cup. France were a goal down to Croatia when the right-back took it upon himself to drag his team all the way to the final.

He only scored two goals for his country, but what a time to do it. For both strikes he won the ball for his team, charging forward and the second he cut inside to curl a wonderful left-foot shot into the far corner, forever entering French football history. 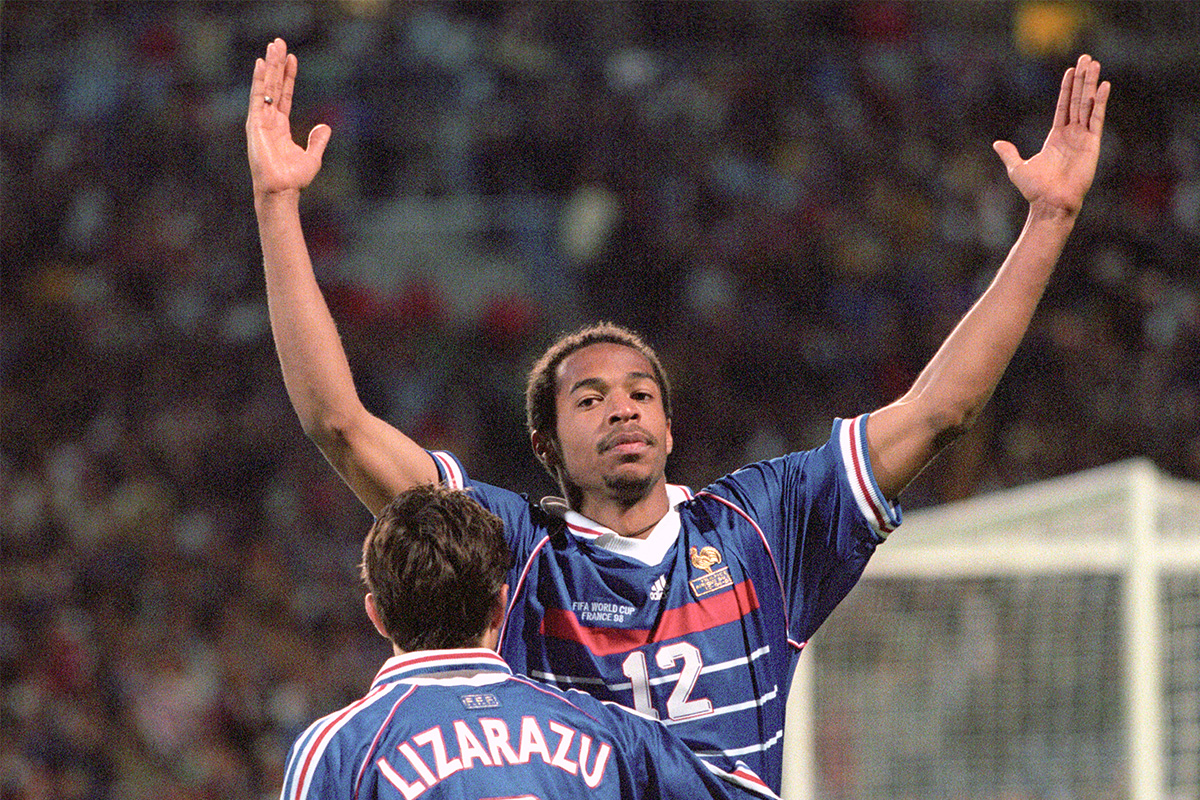 Hated by the Irish, loved by Arsenal and France fans, Thierry Henry needs little to no introduction. He is France's all-time leading goal scorer with 51 goals, sadly his last was a penalty against Austria at the Stade de France, not a trademark curling effort with his wand of a right-foot.

It was at France '98 where he burst onto the scene as an electric winger. From Monaco he would briefly move to Juventus before finding his spiritual home at Arsenal. Unfortunately, the majority of his time in the national team was met with mediocrity around him, but that doesn't mask his ability or position as one of France's best ever forwards.

No one has scored more goals and only Thuram has made more appearances. He was also named as Man of the Match as they came back from 1-0 down to beat Italy 2-1 in the Euro 2000 final. France struggled from 2002 to 2010 – take away 2006 😉 – but they would have been considerably worse without a player of Henry's ability.

It is sad that in the modern day, the name of Michel Platini is hardly remembered for his actions on the pitch. France still tries to remember a different image. One of beauty, of vision and grace, the moments of sublime control and the flashes of brilliance the saw him make a devastating impact on Les Bleus.

Until Antoine Griezmann's delicate chip against Iceland, no French player had scored more than three goals at a European Championship than Platini. His nine goals in five matches at Euro 84, not to mention his goal return of 41 in 72 games as an attacking midfield, which is incredible.

You don't become a three-time Ballon d'Or winner by wearing a suit.

Amazingly, Zidane will be always be remembered for his two headers against Brazil that helped France win the 1998 World Cup, in truth, he had a poor tournament.

The Marseille-born magician was actually much better in 2002, and then in 2006 when he returned. His majestic, phenomenal displays against Spain and Brazil, turned back the clock and led France to the final against Italy.

He would end his career with another iconic moment, but in France they try to remember the great times that came between his red cards in 1998 and 2006. He played in two World Cup finals, scored three goals and is easily the most iconic player to ever pull on the blue shirt.

It wasn't just his magical ability with the ball at his feet, but also his unpredictability that made him so deadly, and loveable. A loveable rogue, a compelling figure and Les Bleus greatest ever footballer.