The mere mention of Florian Thauvin’s name will bring shudders down the spine of most Newcastle United fans, but in the south of France visitors to the Stade Velodrome are given chills of very different kind.

He’s certainly come a long way from finishing without a goal or an assist in his 13 appearances for the Magpies during the 2015/16 season.

In truth, his move to England’s North East should never have happened.

Newcastle had already struggled to find a place in their side for Rémy Cabella, another Ligue 1 standout who possessed a similar style and body-type. Yet someone, somewhere decided to pull the trigger and Thauvin joined for just under £17million.

At the time Marseille were in trouble financially. They had to raise funds quickly and even though it was reported Thauvin wasn’t terribly keen on the idea of leaving Marseille for Newcastle, he agreed to do so for the benefit of the club.

“Florian is a player we have been watching for a long time and I am delighted we have been able to sign him. He is a perfect signing for this club – someone who is young, with great potential and is one of the best young players in Europe.”

Steve McLaren, in hindsight, wasn’t wrong. And two years after he left France for Tyneside, Thauvin is blossoming into one of Europe's most creative attackers. But he's doing it back at Marseille and has left Magpies fans wondering what might have been.

But let's rewind. When Dimitri Payet forced his return to Marseille from West Ham United last year, he received a hero’s welcome, the prodigal son had returned and all the attention diverted quickly to the former Saint-Etienne forward.

This helped Thauvin’s progress in more ways than one. The former Bastia youngster was damaged goods when he arrived back, initially on loan, from Newcastle. A red card on his second debut hardly helped matters.

No one was quite sure if the Orleans-native would ever reach the potential he hinted at when he helped Paul Pogba & Co win the Under-20 World Cup in 2013.

Immaturity and questionable decisions following his departure from Bastia threatened to label Thauvin as a trouble-maker. But his attitude at OM was exemplary even if the negative stories followed him around longer than merited – although wearing a tuxedo on his arrival in the North East was an uncharacteristic French fashion faux pas. 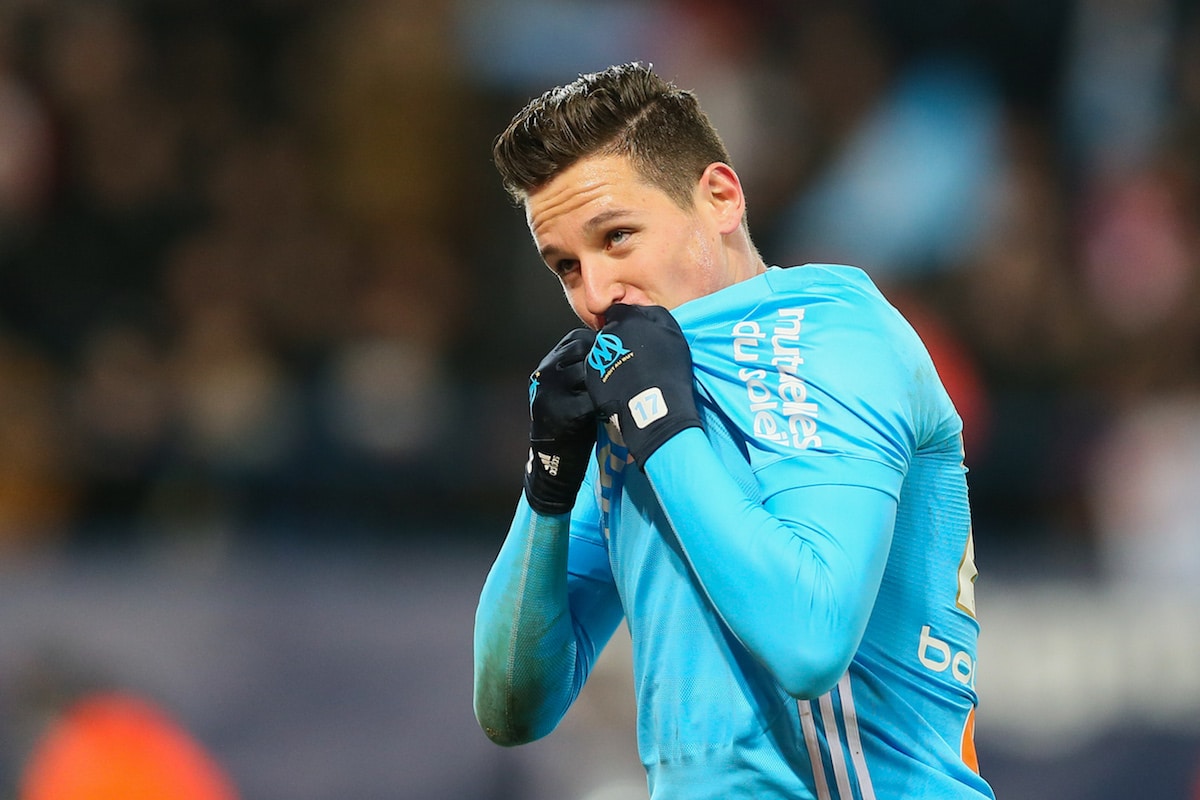 With Payet grabbing the spotlight, Thauvin went about growing and adapting his game further, finishing the season with 15 goals and eight assists. Only Bafetimbi Gomis, Marseille’s only recognised striker, scored more. Slowly and without much fan-fare, this was becoming Thauvin’s team.

More was expected from Payet this term. With a full pre-season under his belt and the puppy fat he seemed to pick up in England gone, he was earmarked as the leader of Rudi Garcia’s squad.

Yet behind the scenes, Thauvin was working hard to help his body match his brain.

He used sports science to balance the kinetics of his body. His running style and strength saw him often lean to his left, which was picked up on by defenders and made him predictable with the ball at his feet.

The former France Under-21 international worked on his weaknesses, improved his explosiveness and became more unpredictable in one-on-one situations.

There’s no doubt he still favours cutting in from the right-flank, but he is much more confident in his weaker foot, he can hit the by-line and has shown his ability to deliver crosses with his right.

There is no harm in having a go-to move – Arjen Robben’s whole career has been based on one – but you need to show you are a threat on both sides to make it work. Thauvin has put the hours in to improve his physical make-up and it has made him a better player.

“At 22, you leave your country, you discover a new culture, a new language, a new league, the food isn’t the same,” he said, admitting the move to Newcastle came too soon. “It’s complicated, but they’re things that help you grow up.”

This season he has taken his game to another level. With an Expected Goals return of 0.50 and his Expected Goals Assist up at 0.49, he is averaging involvement close enough to a goal a game. Given he has 13 goals and ten assists in 24 games, he’s hitting those marks.

Unsurprisingly, this is the best return he has ever managed, a long way from 0.07 xG and 0.13 xA he registered at St James’ Park.

Although they signed Kostas Mitroglou on deadline day in the summer, the Greek hit-man hasn’t settled as well as OM had hoped – just three goals in 11 appearances – and they have had to adapt to a 4-2-3-1 formation, without a recognised striker.

Thauvin has not only benefitted from this, it has shone light on his leadership qualities and change in attitude. Several of his goals have come from his desire to sprint forward get into the opposition penalty area, with and without the ball.

Older and wiser, Thauvin is no longer the spoiled kid from south of Paris, his time at Newcastle was a failure, but without failing and facing adversity, he was never going to grow into a stronger individual.

You can feel a real sense of a reinvigorated player, taking full advantage of his second chance in France. 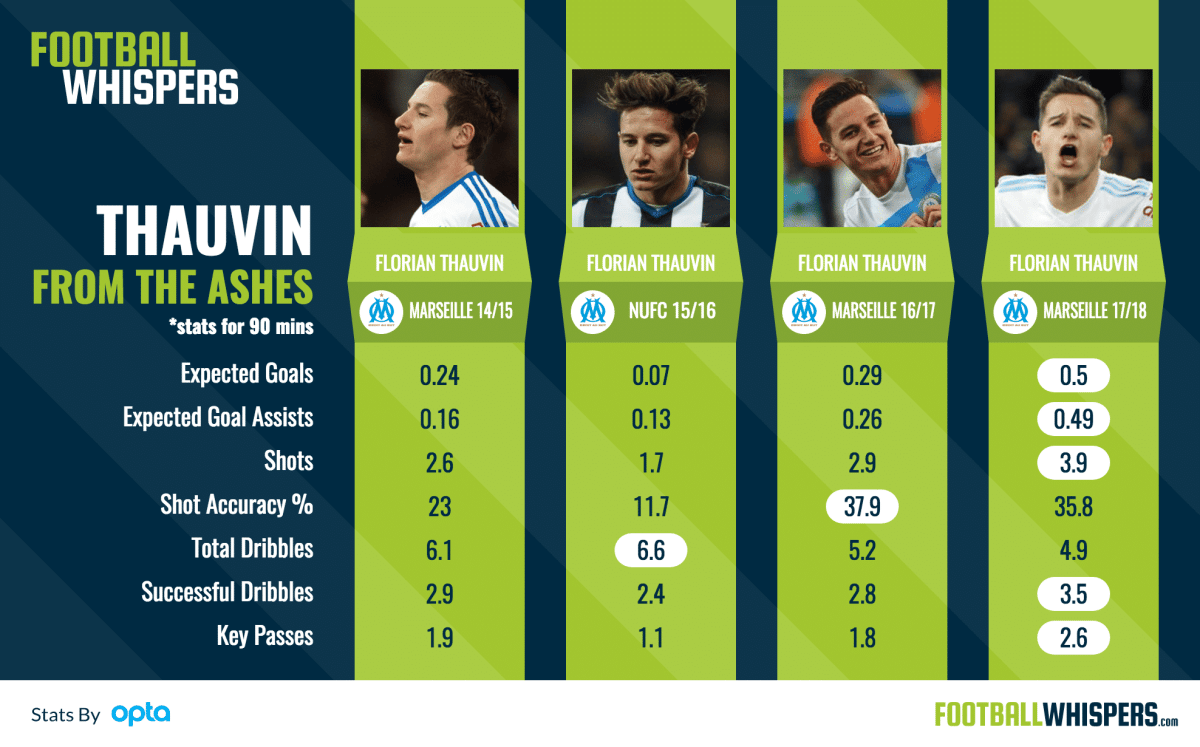 “With every ball he received, he felt he had to make an impact,” former Marseille president Vincent Labrune told France Football. “He felt obliged to carry the team on his shoulders. He now knows that the ball will come back to him.”

This season is the first time since 2014 that the 25-year-old has attempted fewer than five dribbles per 90 minutes, but what is key, is the number he now completes, going way up to 71.4 per cent. He knows he doesn’t have to do everything himself, or beat someone every time he’s on the ball.

Taking more shots, putting more on target and providing key passes, as Thauvin enters the peak years of his career, he’s fulfilling all the promise he showed before he moved to England.

“I think the big thing is don't be afraid to fail. I think, you know, in our society today, Instagram, Twitter, it's a highlight reel. It's all the good things,” Philadelphia Eagles quarterback Nick Foles told reporters after winning the Superbowl after starting the season as their back-up.

“When you look at it, you know, you think like, wow, when you have a rough day or your life is not good as that, [you think] you're failing. Failure is a part of life. It's a part of building character and growing. Without failure, who would you be?

Thauvin failed, but he has picked himself back up and not only become a much better player, but he’s the leader at a club he loves and the darling of the Marseille faithful.

Sitting second in Ligue 1, many expect France’s best supported club to earn a place in the Champions League next season, which would be another chapter in Thauvin’s amazing story.

It may not come with a trophy at the end, but being Marseille’s MVP could be Florian’s Superbowl.