In the summer of 1996 England were on the brink of tasting success on home soil in a major international tournament for the first time since being crowned champions of the world some 30 years earlier. But behind the hype, bunting and national fervour was a man who has probably not gained the credit he genuinely deserves for the role he played.

It might be strange looking back at it now but Pre-Euro ’96 only a fool would have fancied the hosts to go all the way and “bring football home” in the way that the history books tell us they oh-so-nearly did back in that glorious summer.

In the previous European Championships in Sweden they hadn’t even managed to get out of their group after a miserable campaign saw England only score one goal in three games and, of course, after that they didn’t even qualify for the World Cup of 1994 in America after an equally miserable qualifying campaign.

England had hardly gone into this tournament in any kind of form either. Qualifying as hosts meant that they would only play a series of low-key friendly games in the lead-up to the competition, while other nations battled it out for the other 14 places available. In fact, England’s last meaningful game would be their infamous defeat to Holland in the spring of 1994 which had cost Graham Taylor his job.

And when the England squad – on a pre-tournament trip to China and Hong Kong – were snapped in a bar wearing ripped shirts and having drinks poured down their throats while reclining on a “dentist chair” it looked like things would carry on where they had left off when it came to the national side’s performance in major competitions.

But did this apparent pre-tournament self-implosion cause disharmony in the camp and drive a wedge between management and players? No it didn’t. And why not? Because England’s manager going into Euro 96, Terry Venables, had complete trust in his players.

Venables was a football man through and through. He’d known nothing else in his life and as a player he’d been at Chelsea, Tottenham, QPR and Crystal Palace before embarking on a managerial career which peaked when he took over at Barcelona. He knew what it was like to be a footballer and he knew how to deal with them. He knew how they worked and he knew how they relaxed.

He’d cut his teeth in the English game, watching, learning, listening and understanding before passing on his knowledge and experience when it came to management. First and foremost Venables was not a coach – he was a manager. 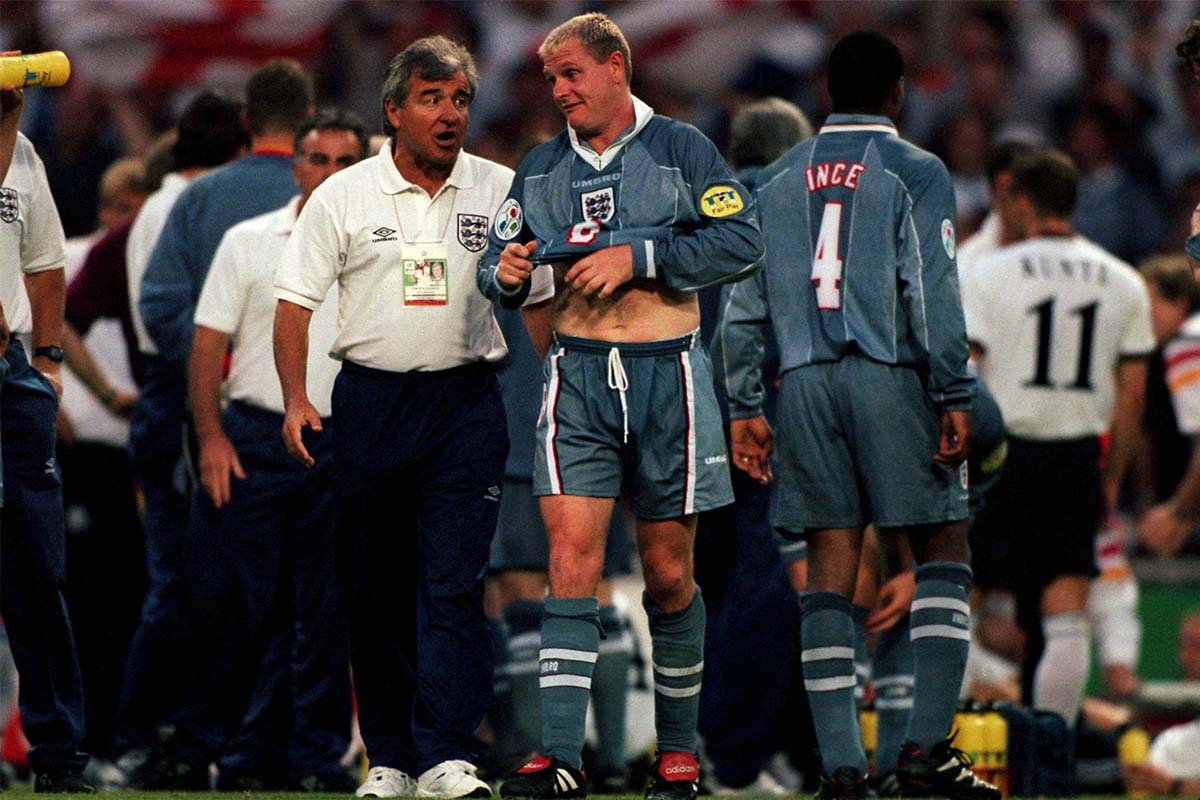 So when his players appeared on the front pages of the tabloids following that boozy night just days before the tournament began for real, he didn’t feel the need to impose fines or publically lambast his players because in his words, “I had given them permission to go out.”

His firm-but-fair attitude towards his players continued throughout the tournament, but even before a ball was kicked, he was faced with something of a selection dilemma that may have seen lesser bosses crumble under pressure.

Alan Shearer was one of the Premier League’s most prolific strikers at the time and was on the brink of a record breaking £15 million pound move to his boyhood team Newcastle United from Blackburn, but going into the tournament he had gone 12 games without scoring a goal for his country, something which could have elevated the likes of Robbie Fowler or Andy Cole to lead the line – but Venables stood by his man.

“He said to me about a month or five weeks before the tournament started, whatever happens in the friendly games between now and the tournament, you will start that first game against Switzerland,” Shearer subsequently explained. “It gave me so much confidence for him to say that, for the manager to tell me that, when I hadn’t scored in 12 games; that made me believe in myself and gave me confidence.”

Venables’ faith in Shearer would be repaid when the Geordie finished as the tournament’s top scorer, netting five times in the five games that England played that summer and was another display of not just great awareness but also brilliant man management.

England’s manager was faced with a similar dilemma following the disappointing 1-1 draw with Switzerland in the first game of the tournament. After taking the lead through Alan Shearer’s first goal for his country in 21 months, the Swiss levelled from the penalty spot with most onlookers far from impressed.

Venables had substituted arguably England’s most talented player Paul Gascoigne in the second half for David Platt, a move which alarmed Gazza and lead him to begin questioning his ability as well as his place in the side. 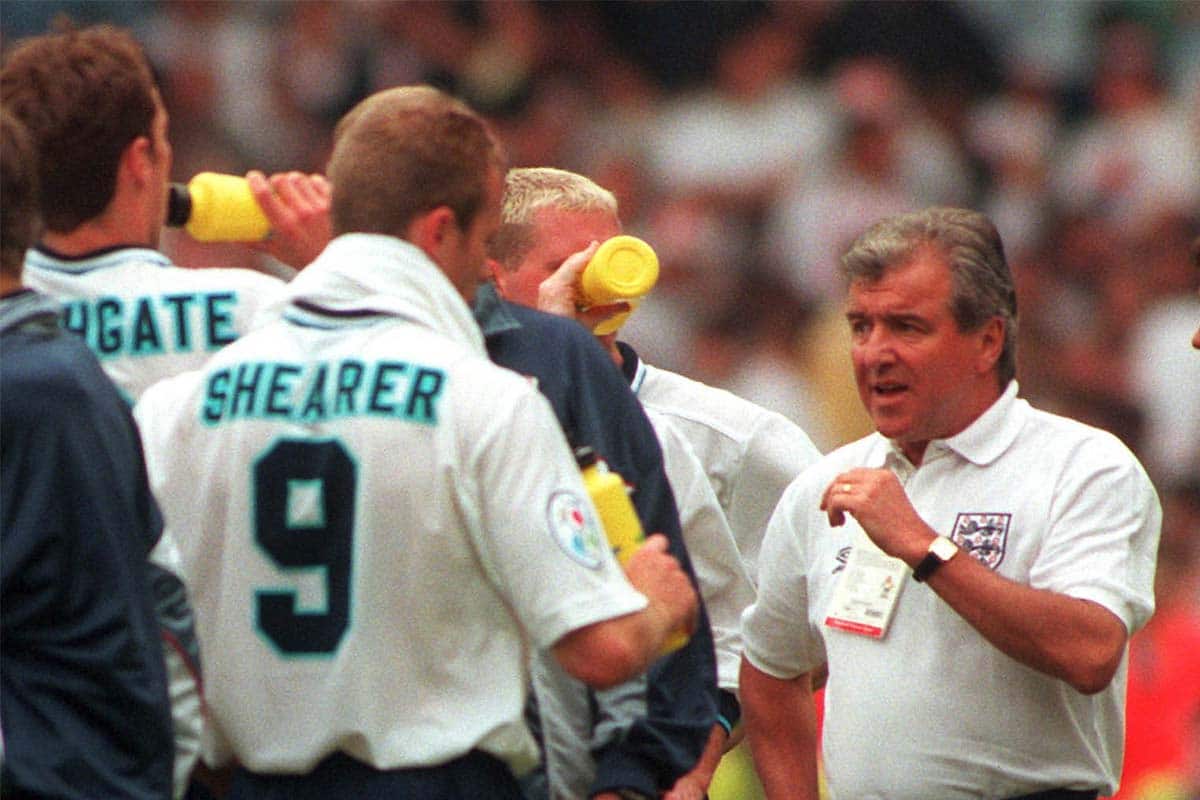 Unable to sleep the midfielder went to his manager’s room to demand clarification that he would be starting against Scotland; but Venables wasn’t quick to reassure his superstar immediately. Instead he let Gascoigne believe he had no divine right to start for his country, before letting him know that he would, of course, be starting him in the game and sending him off to bed to get some rest.

The England manager may have been seen as a father-figure to many in that squad but it would be unfair to overlook his tactical nous in Euro ’96; and Venables certainly wasn't afraid to tinker with the way his side played, as the Three Lions progressed to the Euro 96 semi-finals.

In that opening game against Switzerland they began with a familiar shape as Steve McManaman and Darren Anderton alternated on both flanks and with England far from convincing they were able to call upon Nick Barmby, who came on for Teddy Sheringham, to steady the ship and reverting to 4-5-1 in a game they would eventually take just a point from.

For the second group fixture against Scotland Venables started Gareth Southgate in midfield with Paul Ince, hoping to capitalise on Paul Gascoigne’s attacking prowess, but it didn’t work as planned. At half-time Venables brought on Jamie Redknapp for Stuart Pearce, and England adopted a three-man defence as Southgate dropped back. Gazza, who had been unsure he would even start was now free to work his magic and scored one of the greatest Wembley goals of all time.

Although Venables was now seen as something of a tactical maverick, he wasn’t afraid to be conservative when he wanted to be and this was proven in the most emphatic way when he adopted an orthodox 4-4-2 formation against Holland as the hosts destroyed their Dutch opponents in one of the most memorable performances by an England side in 30 years.

Sticking with the same formation against Spain in the quarter-finals proved to be less fruitful though as a patchy England performance meant they had to do things the hard way and had to rely on a penalty shootout win in order to progress to the semi-finals against Germany. 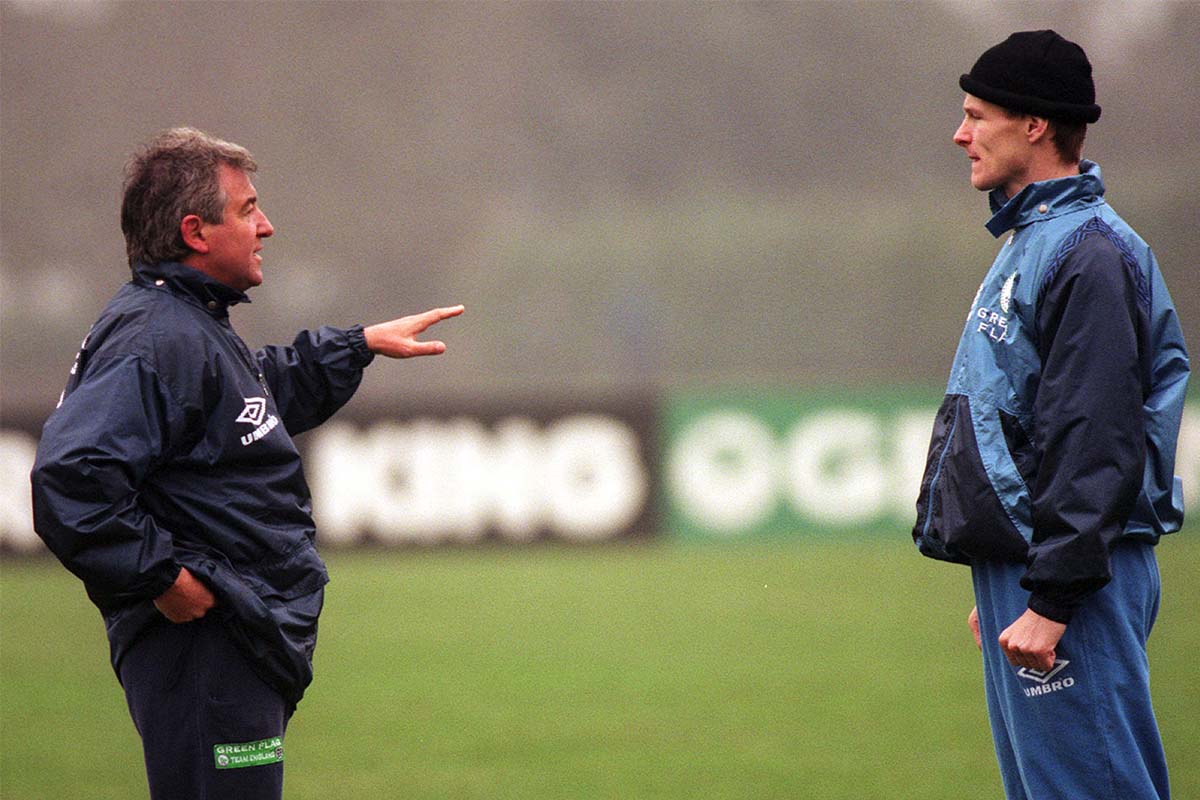 So for England’s biggest game since they met the same opposition in the World Cup semi-final in Turin six years before, Venables found himself with something of a dilemma. Gary Neville was suspended so he opted for a three man defence of Southgate, Tony Adams and Pearce as Platt retained his place in midfield alongside Ince, which meant that Gascoinge was able to push forward in support of strikers Sheringham and Alan Shearer.

Although they started brightly, with Alan Shearer scoring his fifth goal of the tournament inside the first three minutes, England were soon pegged back and after two hours of end-to-end football, England finally succumbed in a penalty shoot-out to Germany despite wasting a couple of great chances to with the game.

Somewhat surprisingly, however, despite two hours of non-stop and gruelling football, Venables failed to bring on one of the three substitutes available to him that night, something which lead to many raised eyebrows at the time and even resulted in questions being asked for the first time of the man who had taken England as close to a major final as Bobby Robson in 1990.

But despite the doubters, those three weeks in the summer of 1996 are rightly looked upon by many as one of the greatest periods in the modern history of the England national side and regardless of the slow start, that group of players grew in confidence as the tournament progressed and began to play the brand of football that so many had craved for so long; particularly after such a desperate period in the years following the heartbreak of Italy ’90.

By being given the confidence to play their own game and due to the reassurance of a man who wasn’t afraid to adapt when need-be, they captured the imagination of, not just the footballing world, but the general public too, thanks to a manager who was as much about treating his players like family than the mutli-million pound commodities that they were.

Johan Cruyff once said: “We have plenty of coaches, but we’ve got to have more teachers,” and for that memorable, sun-soaked, spell some two decades ago Terry Venables was more than a teacher, he was a professor.

But school was now out and following England’s exit Venables, who had not agreed a new contract with the FA, would depart for a new role in charge of the Australian national side. A decision which left many wondering, with the collection of players at his disposal, not to mention a managerial style which seemed to galvanise whoever played under him, what might have been for English football had he stayed for another term.