Footballers come in all shapes and sizes, and with wildly varying skillsets. There are predatory finishers, ball-winning midfielders, flying wingers and towering defenders.

But there is often a special kind of praise reserved for the creators, those who slice open defences with surgical precision, changing the complexion of a game in the blink of an eye.

With the rise – and subsequent fall – of the No.10 as well as wing-backs, inverted wingers, deep-lying playmakers and second strikers, chances are created all over the pitch.

But only a select few have mastered their craft. Every player has the capacity to find a teammate making a run, but there are an elevated band of craftsmen who repeatedly prise open the opposition's backline.

Here, using the Football Whispers Lab, we run through the top 10 ‘big chance' creators per 90 minutes across Europe's top five leagues this season. And, in the interest of decent sample sizes, only players who have played at least 1000 minutes are eligible.

Now that's out of the way, on with the list!

A prolific scorer in the Dutch Eredivisie for FC Utrecht, Haller has blossomed into one of the Bundesliga's most dangerous forwards during 18 thrilling months at Eintracht.

He has already surpassed his 13 goals in all competitions last season with 17, but has also been one of the main providers of chances for Die Adler this season, creating 14 big chances overall, notching nine assists (ranking him first among strikers in Germany's top-flight).

Haller, who emerged as a Newcastle United transfer target in January, is still only 24. He has an exciting future, whether it's continuing to gel with Luka Jović and Ante Rebić for Adi Hütter's side or in another division.

After a scintillating start to the season, the pint-sized Scot has somewhat cooled his output.

Fraser has nine assists in the Premier League this term, the last of which came on January 2. Perhaps he is feeling fatigued; he has played more minutes than any other player on this list this season (2384 minutes).

The Football Whispers Story Mining tool depicts Fraser's slight decline. Before December 30, he was averaging 0.27 expected goals assisted (xA) per 90. That has since dropped to 0.08.

Fraser's up-and-down trajectory mirrors Bournemouth's season as a whole. While Eddie Howe may be left feeling rather disappointed his side haven't ended up challenging for seventh place, Fraser can still be pleased with his own contributions.

Having lit up the World Cup with four goals for hosts Russia last summer, Cheryshev has enjoyed a fine season on loan at Valencia from Villarreal.

The 28-year-old has created ten big chances this term, only two of which have been converted by his teammates. But Cheryshev has certainly done his part; his 0.37 xA per 90 ranks him first among midfielders in La Liga.

Like Fraser, Cheryshev's best form came prior to Christmas. He was averaging 0.71 xContribution per 90 (expected goals + expected goals assisted) at one stage, but that has fallen to 0.34.

That has not deterred Los Che, though, who are planning to exercise their option to sign him permanently for €7million.

The Canadian-born Dutchman, once a key figure at Swansea City, is another to have found a home in Eintracht's line-up.

The midfielder wasn't always a regular fixture under Niko Kovać but has been given plenty of opportunities to prove himself by Hütter.

And he has largely taken them, creating nine big chances overall with six of those being finished off by his teammates.

De Guzmán has found himself on the bench of late but can still play a part in the last two months of the season as Eintracht chase a top-four finish for the first time since 2012.

Tied with De Guzmán is Liverpool transfer target Demirbay. Hoffenheim have endured a disappointing season after last year's third-placed finish, currently ninth and with little hope of returning to the Champions League.

But Demirbay has continued to fulfill his duties as Julian Nagelsmann's chief creator. The 25-year-old's 0.66 big chances created per 90 is the most among Bundesliga midfielders and he is one who can fashion opportunities from a dead-ball situation, too; nobody has managed more than his 24 set play key passes this term.

With Nagelsmann set to join RB Leipzig in the summer, it will be interesting to see whether speculation linking Demirbay to the Premier League resurfaces, with Liverpool among those said to be interested. 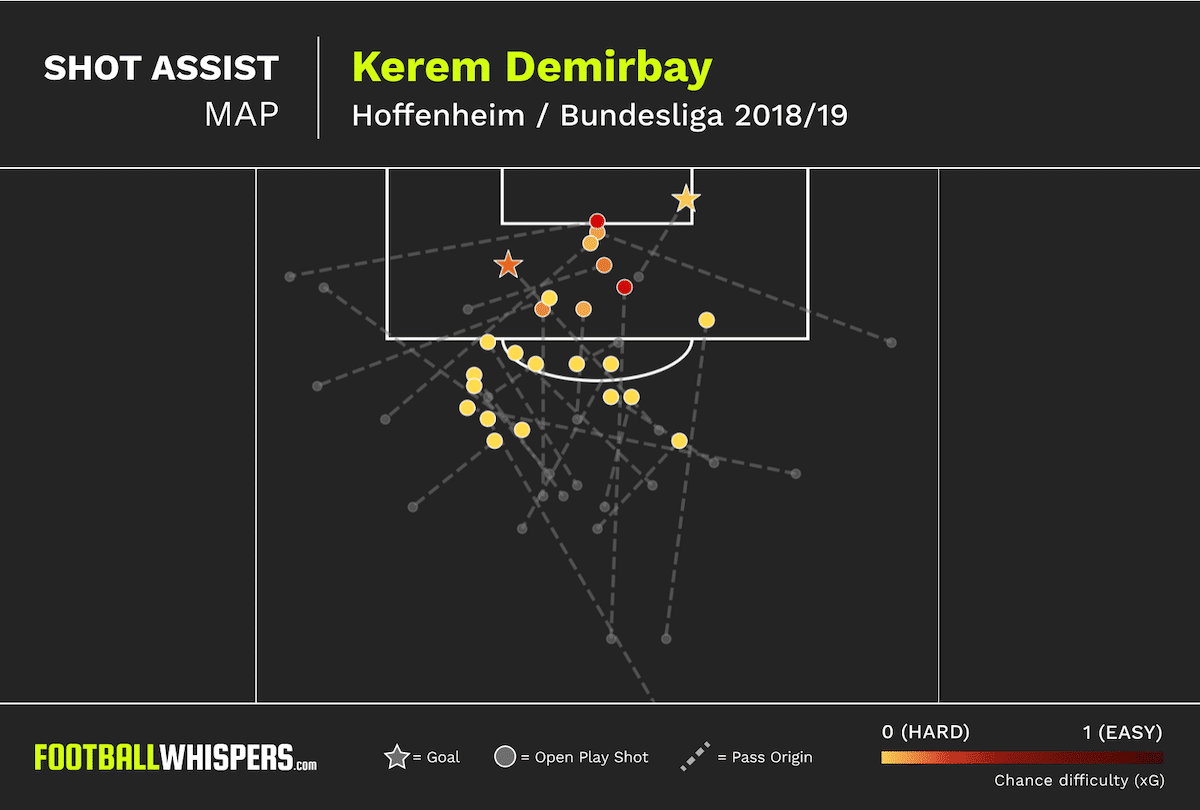 Perhaps the least-known member of the top ten, Savanier is enjoying the finest season of his career.

And much of that has been thanks to Savanier. The 27-year-old has created more big chances than any other midfielder in the division with 14, leading to eight assists (also ranking him first).

He has chipped in with some excellent goals, too, like his masterful 40-yard chip against Dijon in February.

Marek Hamšík's departure to China marked the end of an era at Napoli but, thankfully, they have another nimble-footed creator in Mertens.

The diminutive Belgian is more renowned for his goalscoring prowess at the Stadio San Paolo, having reached a century for the club this season, 34 of which came in an extraordinarily prolific campaign under Maurizio Sarri in 2016/17.

This season, Mertens has 11 goals but has also acted as an architect under Carlo Ancelotti. The 31-year-old has been Serie A's most creative forward this term, leading the way in big chances created and assists per 90.

Mertens has also contributed two assists in the Europa League as Ancelotti eyes European success in his first season at the helm, with Juventus having already all but wrapped up their eighth successive Scudetto.

You probably didn't expect to see a former Blackburn Rovers reject near the top of this list, but yet here we are.

Rochina, who left Rovers in January 2014, turned out for Rayo Vallecano, Granada and Rubin Kazan before settling at Levante.

A graduate of Barcelona's esteemed La Masia youth academy, the midfielder has been a major reason why Levante aren't lower than 15th in Spain this season, with two goals and five assists.

But he is creating chances at an impressive rate, having fashioned nine in total and 0.71 per 90 minutes.

Surprisingly, Levante create a lot of big chances for a side languishing three places above the La Liga drop zone. With 46, they are behind only Barcelona, Real Madrid and Valencia. The problem is that they have missed 33 of those.

There have been a few left-field inclusions on this list but there is nothing surprising about seeing the illustrious Brazilian near the top.

Neymar has been immensely productive since joining PSG from Barcelona in 2017, both in terms of goalscoring and playmaking.

This season, Kylian Mbappé and Edinson Cavani have scored more but the former Barcelona star has been Les Parisiens' creator-in-chief.

Injured since mid-January, Neymar managed to fashion 13 big chances in just 1127 minutes of action this season. Thomas Tuchel's side certainly could have used his ingenuity against Manchester United as the Red Devils inflicted more Champions League misery on the French champions. 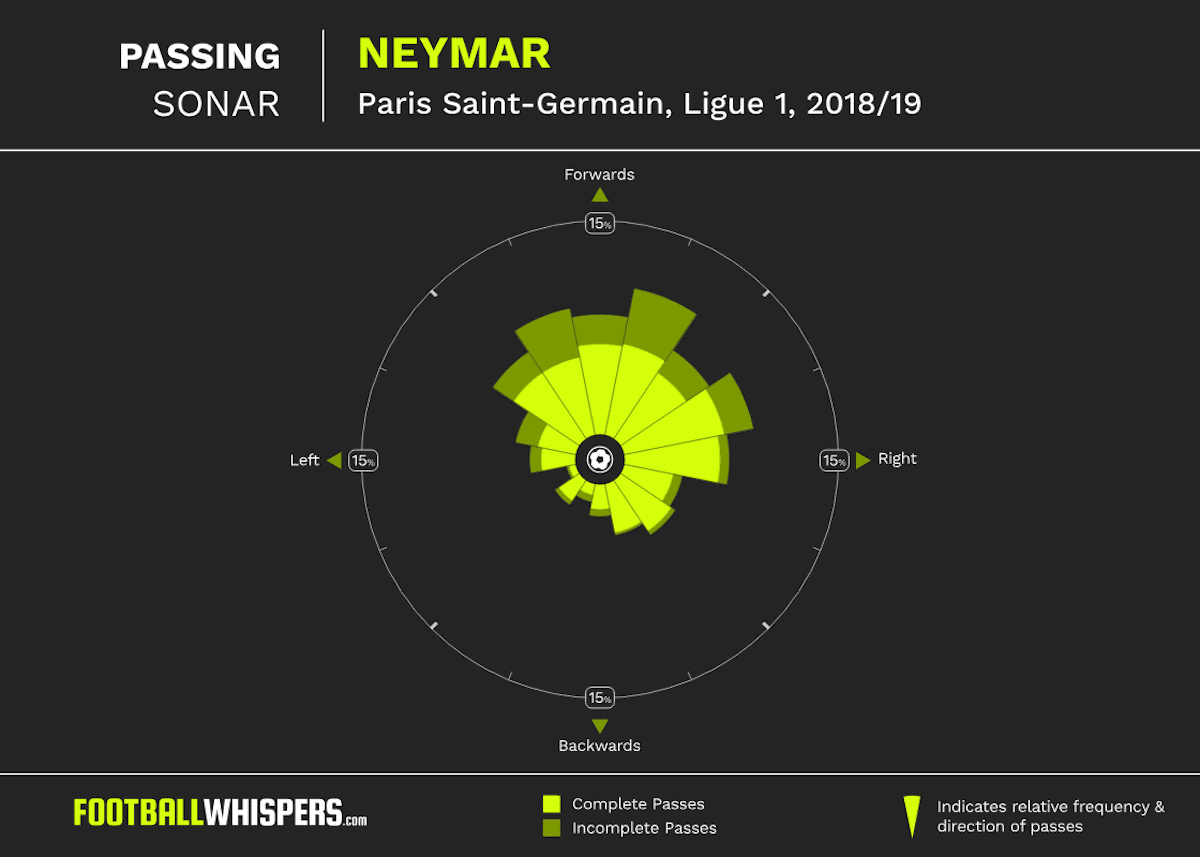 The superlative-exhausting Argentine has continued to rule La Liga this season. Barça, seven points clear and on course to defend their crown, have been able to depend on Messi yet again.

Luis Suárez has endured an indifferent campaign, Ousmane Dembélé still isn't producing as consistently to justify his £140million price-tag while Malcom and Kevin-Prince Boateng are two recent recruits to have barely featured. 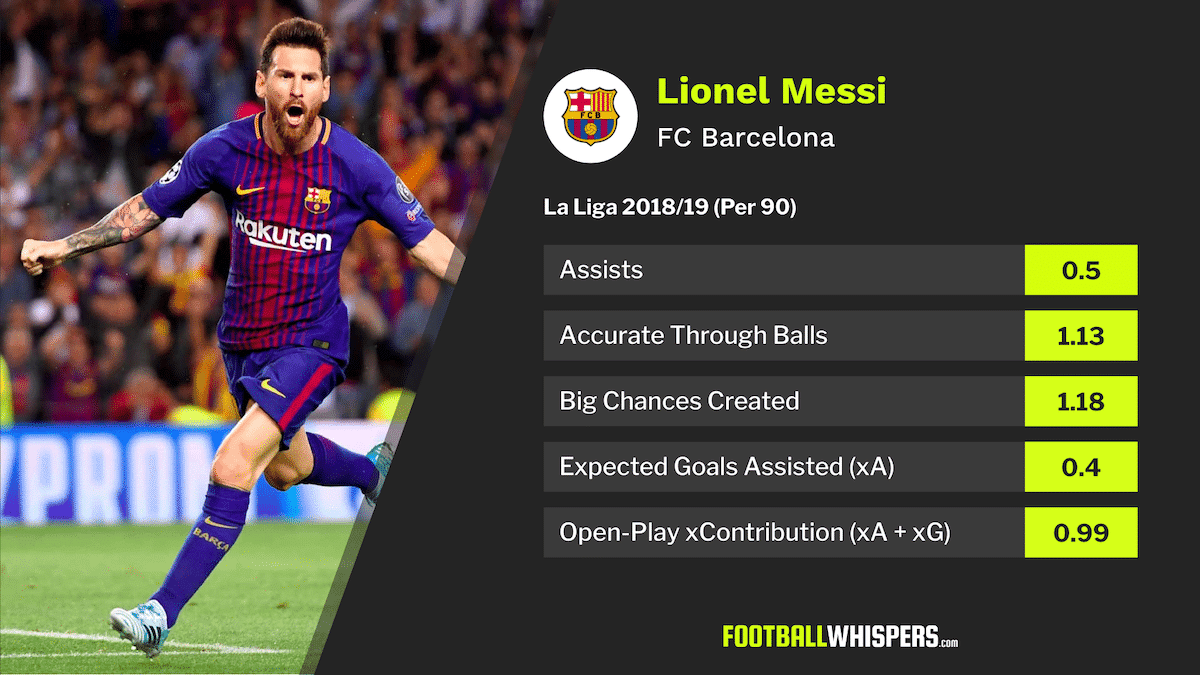 But Messi, a seasoned veteran at 31, has propelled Ernesto Valverde's men to the summit once again. In total, he has created a whopping 26 big chances. The fact that he has 11 assists is down, at least partially, to Suárez's erratic finishing of late – the Uruguayan has missed 25 big chances this season, nine more than any other player in the league.

Messi was suspiciously quiet during Barça's recent double Clásico triumph over Real Madrid, but one suspects they'll need his craft and guile to get past an impressive Lyon outfit in the Champions League.