Football fans always appreciate a good dribbler. The players who are capable of taking on a defender, beating him with skill or pace, are always popular in the stands. They get supporters off their seats, bring excitement to even in the dullest of games.

Most commonly, wide players complete the most take-ons in their respective teams, although there are exceptions. Gone are the days when wingers were given the sole responsibility of beating a full-back and whipping in a cross.

The emphasis now is on cutting inside from wide areas and driving at goal. And there are plenty of players who operate in central areas capable of beating an opposition defender.

Here, using the Football Whispers Lab, we have identified the top ten players – who have played at least 1,000 minutes – with the most successful take-ons per 90 minutes in Europe’s top five leagues this season.

Son of former Juventus and Barcelona defender Lilian Thuram, Marcus has plenty to live up to. His father, capped 142 times for France, won World Cups, league titles, and played for Europe’s biggest clubs.

Marcus Thuram does not appear to be feeling the pressure, though. The 21-year-old has excelled with Guingamp in Ligue 1 this season, scoring seven goals in 23 appearances primarily from the left of a front three.

But it is not just his goalscoring that has caught the eye. Thuram is an explosive dribbler, fleet-footed and direct. He is a menace for defenders with the ball at his feet and has completed an impressive 78 take-ons, at a rate of 3.68 successful per 90 minutes, this season.

Paris Saint-Germain boss Thomas Tuchel even singled the youngster out for praise when he scored against the league leaders earlier in the season. “Ligue 1 is a very tough championship physically, with very strong players, like Guingamp's Marcus Thuram, who runs fast, is strong, dribbles well and is good in the air,” the German coach said.

Thuram, who has gone under the radar somewhat at Guingamp, is clearly a player with a big future.

Chelsea’s diminutive Belgian is hardly a surprise inclusion in this list. Hazard is a focal point in attack for Chelsea and unquestionably one of the most talented dribblers in the Premier League.

His close control, swift movement and upper body strength make it incredibly difficult for defenders to rob him of the ball, which is why he's completed 3.69 take-ons per 90 this season.

Hazard is skilful and intelligent, too, and more often than not has an end product after he has beaten a player. In 28 Premier League appearances this season, Hazard has 13 goals and 11 assists to his name. And his ability to glide past defenders with apparent ease plays a major part in his productivity.

The highest ranked Englishman when it comes to successful take-ons, Sancho has enjoyed an exceptional breakthrough season with Borussia Dortmund in the Bundesliga.

The 18-year-old winger, who has established himself as a regular with BVB since joining from Manchester City in 2017, has averaged an impressive 4.04 successful take-ons per 90 minutes.

That has helped Sancho contribute with ten assists – the joint highest total in the Bundesliga along with Joshua Kimmich – and eight goals.

It is little wonder the teenager is attracting so much attention back in England. Sancho is an exciting talent and it will probably not be long before he is a regular in the national team.

Nice’s Atal is the only full-back to make this list, which gives an indication of his attacking intent. The 22-year-old is not a typical right-back. He can often be seen pushed right up when his side are on the ball and takes plenty of risks defensively.

There are areas in which the Algeria international can improve, of course, but he is a young player with great potential. And if he continues to drive at defenders with such efficiency, he may find himself playing in more advanced positions in the years to come.

It might be a surprise to see Messi so low down in the take-ons charts, but the brilliant Argentine’s slaloming runs are not as commonplace as they once were.

He has averaged 4.17 successful take-ons per 90 in La Liga this season, compared with 5.55 last season. 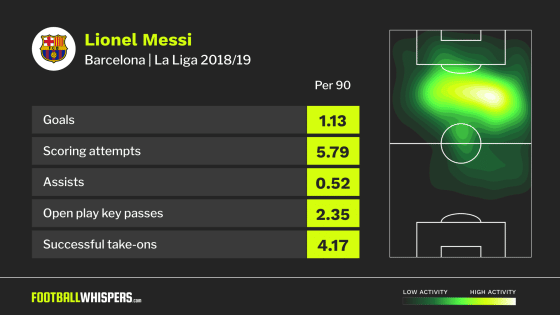 Instead, Messi often looks to play a defence-splitting pass or arrive late in the box. This season, he has averaged 1.26 big chances created and 2.35 open play key passes per 90 minutes.

That is not to say that Messi no longer looks to take on defenders. He still does so regularly and usually with unerring ease. The difference, perhaps, is that he is now more selective with his dribbling.

Nice are blessed with a couple of exceptionally gifted dribblers of the ball on either flank. The aforementioned Atal torments his opposition full-back on the right, while on the other side, Saint-Maximin does the same.

The 22-year-old Frenchman is quick and direct and equally capable of playing in a more central role. Saint-Maximin, who has struck six goals and provided three assists in Ligue 1 this season, still has plenty to learn but his potential is clear to see.

It is no surprise, then, that he has been linked with a move to several clubs across Europe, including Milan.

That Neymar averages over five successful take-ons per 90 minutes in Ligue 1 is no surprise. The Brazilian takes every opportunity to beat a defender, even when it might not appear necessary.

And he often opts for the most extravagant route past his marker, with a flick or a feint. It can result in frustration for his opponents, who often retaliate by blatantly fouling the world's most expensive player.

Not that, when fit, it has an adverse impact on his game. The former Barcelona man has 13 goals and six assists in 13 Ligue 1 appearances this season as PSG march towards another Ligue 1 title.

Januzaj was once tipped as the next big thing at Manchester United. When he broke into the first team in 2013, there was understandable excitement.

But the Belgian failed to live up to expectation. He had loan spells with Borussia Dortmund and Sunderland before joining Real Sociedad permanently in 2017.

Now 24, Januzaj is approaching his prime years. And he has shown glimpses of his ability in La Liga. He is a gifted dribbler – averaging 5.33 successful take-ons per 90 – and technically gifted with the ball at his feet.

To reach the next level, though, Januzaj will need to increase his contribution in terms of goals and assists. He has yet to score for Real Sociedad in the league this season and has created just three goals for his teammates.

Ben Arfa is enjoying a resurgence at Rennes. Having gone over a year without first-team football at Paris Saint-Germain, the former Newcastle man made the switch last summer and is enjoying the opportunity to play regularly.

At 32, Ben Arfa’s talent is no secret. He has always been skillful and elusive on the ball, a nightmare for even the most assured defenders when at his best.

Consistency has always been an issue for the Frenchman, but he has found that with Rennes. Playing behind the striker with the freedom to roam and create, Ben Arfa is excelling.

Things did not quite work out for Sofiane Boufal at Southampton. Signed from Lille in 2016 on the back of a season in which he scored 11 times in Ligue 1, much was expected of the Morocco international.

Fans at St Mary’s saw only glimpses of his ability, though, and he left for Celta Vigo last summer after two underwhelming years on the south coast of England.

Since his move, Boufal has been the most prolific dribbler in Europe’s top five leagues.

He averages 6.38 successful take-ons per 90 – up from 4.52 in his final Premier League season – and has been a rare bright spot in a poor campaign for Celta, who have fallen into the relegation zone.