Outside of his own house, the name of Malang Sarr wasn’t well-known going into the opening day of the new Ligue 1 season. Injuries to a number of defenders forced the hand of new boss Lucien Favre. Rather than take the time to settle into his new position, he may have impressed in pre-season against Napoli and Sporting, but no one was expecting what would happen next.

An hour into his debut, with a goalless draw with Stade Rennais looking on the cards, Sarr found himself unmarked at the back post and powered Jean Michel Seri’s free-kick past Benoit Costil. It was an emotional moment, not just a teenager scoring on his debut, but a local kid announcing himself to the world while wearing a tribute to the people of Nice after the tragedy that had struck just weeks before.

The area of Les Moulins, known as an place to avoid in the picturesque city of Nice. Sarr was born there in 1999 after his parents emigrated from Senegal. Just five kilometres from what would become the Allianz Riviera, the stadium wasn’t built when Sarr entered the world but it would be the location for his dream introduction to professional football.

“I was anticipating Seri's ball at the far post,” said Sarr when asked to recount his goal after the game. “I thought I should go there. After that, we had to hold onto our lead. It was a tribute to the victims. This was very important for us and I dedicate my goal to them. I'm from this city. It's hard.”

Sarr’s header wasn’t the most impressive part of his performance. Defensively he was excellent. Finishing the game with one tackle, four interceptions and four clearances. “Malang Sarr scoring his first goal on his first start is the icing on the cake,” beamed Favre after the 1-0 victory. He may have become the second youngest player in Ligue 1 to score on their debut, but it was the maturity he showed that really caught the eye.

The young defender had impressed Favre during the summer. As well as the pre-season friendlies, he also played his part for the French Under-17 squad that played in the European Championships in  for France in Azerbaijan. That came on the back of nine appearances for the reserve team last season. Playing in the fourth division can add steel to a young player and give you an idea of how they will fair against older opponents.

Since that opening game against Rennes, Sarr has gone from strength to strength. Starting in the opening day playing in a back four, he has adapted into Favre’s 3-5-2, playing on the left of the trio, with the experienced Champions League winner Dante keeping him right. The experience of the former Borussia Monchengladbach man is invaluable. The Nice coach helped the Brazilian develop in Germany, that’s why he’s rejoined him in Nice, Les Aiglons will hope he can do the same for the 17-year-old.

An ever present for Favre this term, he has started all 12 games, only coming off the pitch once, that was during the 1-1 draw with Montpellier. No other centre-back in the squad has made as many successful tackles than Sarr. Even more impressive, only veteran Vitorino Hilton at Montpellier, with 3.4 per games, averages more interceptions per 90 minutes out of every centre-back in the entire league.

That’s the same as Eric Bailly at Manchester United, and around the same level as Arsenal’s Laurent Koscielny and Shkodran Mustafi. Stats can sometimes be a little misleading, you don’t have to work for every clearance and interception, there are easy ones to be had. Poor crosses into the box without a striker in sight are bread and butter for central defenders. But you still have to be there and clear the threat. Sarr does that with the air of an experienced centre-back.

Favre’s set-up at Nice is perfect for the young defender. He has the veteran beside him, pushing and pulling him into place, helping him learn his craft. In the midfield he has Seri always dropping back to pick up the ball and Dalbert, the deepest of the two wing-backs ready to provide an outlet. That why he has one of the highest pass completion percentages in the team, up at 89.6%. He keeps things simple, even though only Seri averages more passes per game. 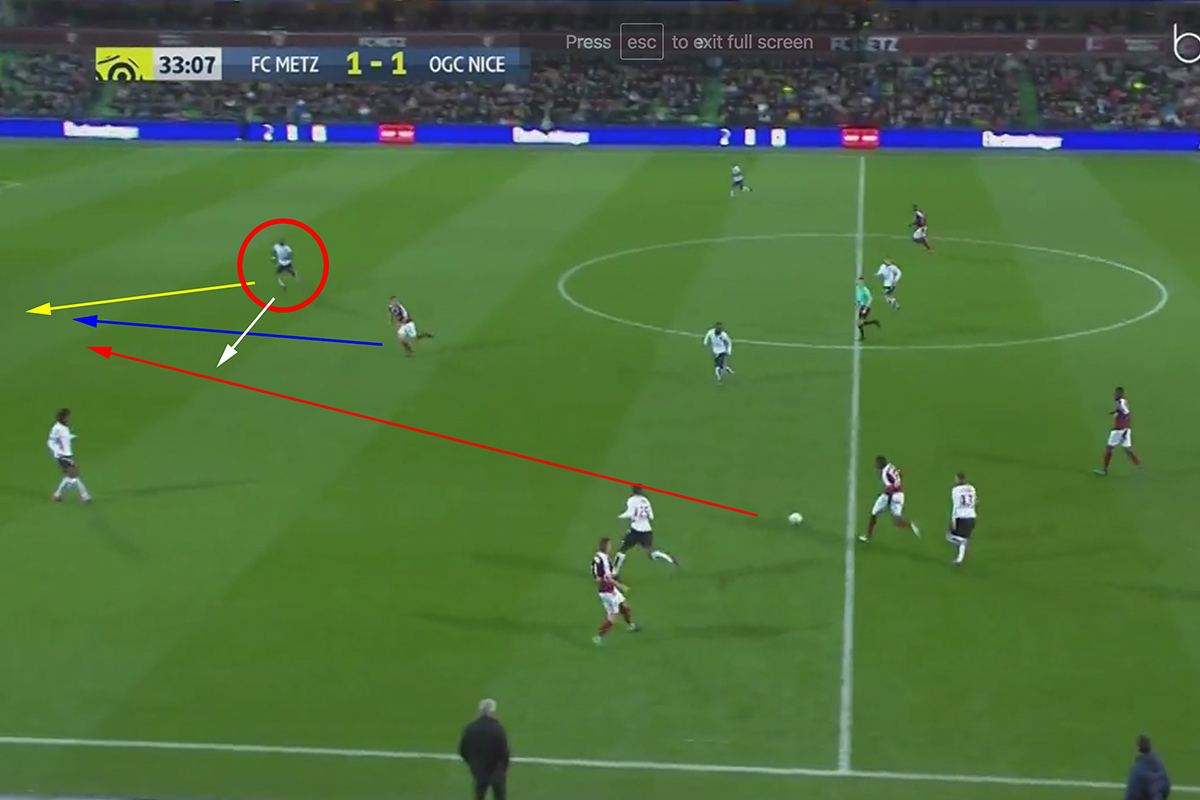 What he does best is read the game and anticipate danger. He seems to be able to sense trouble. Playing away at FC Metz, there was a potential opportunity when Mevlut Erding made a run through the middle. As you can see from the graphic, there is space to move into, but rather than wait for the pass and track Erding’s run, like most young defenders would do, Sarr anticipates the movement, steps up in front of the ball and stops the threat dead.

Regardless of whether the ball is coming from the middle of the park or from the wing, rather than being reckless, he makes his move early, or accelerates to get into the best position.

“Like other young players, he has great potential and room for improvement,” praised Favre when talking about the defender. “Their developments depend on the coach, of course, but also themselves. There is a lot of tactical work to be done, technical, physical and mental.” 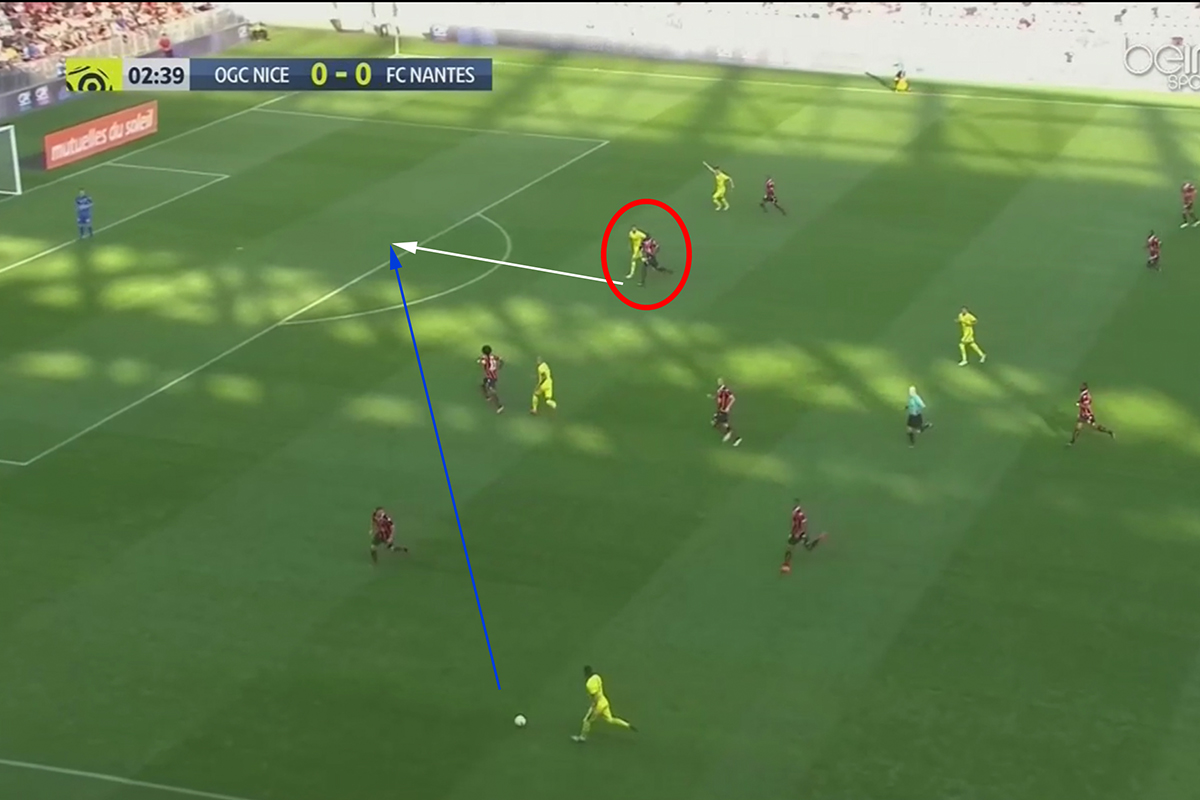 Playing against FC Nantes, with Nice back to a back four, there was more pressure on Sarr to impress and take a bigger role. With the ball on the left-wing, Mariusz Stepinski was looking to find a space in between the centre-backs. Sarr saw the danger, moved  quickly to get into position and was there, ready to clear the ball.

His performances have not gone unnoticed, with rumours that Paris Saint-Germain are interested, Gazzetta dello Sport have also linked him with a move to Inter or A.C Milan. It seems that Favre is using the same tactics that Christophe Galtier applied with Kurt Zouma. Eager to keep his young star under wraps, the Saint-Etienne coach was reluctant to hand him a professional contract too quickly, as that means he will be handed a permanent squad number and his name on the back of the shirt.

No matter if he’s wearing No.33 or 34, his impressive performances have caught the eye and you can guarantee Premier League sides will be closely monitoring his progress. Arsenal have been linked and you can imagine Claude Puel will be eager to bring him to the south coast if he loses one of his starting defenders.

Tracked by Liverpool according to the often unreliable Le 10 Sport, Reds fans may been keen to send Mamadou Sakho to the Allianz Riviera in exchange for the young defender and Everton. Just across the city, could use the talented teenager as a back-up to the experienced duo of Phil Jagielka and Ashley Williams.

A professional contract seems on the cards during the next international break, including a reported €50 million release clause. That will secure him with a squad number and his name on the shirt, but possible accelerate his departure from the club he has called home since he was five years old.