Tanzania and Central African Republic lock horns this Wednesday in an international friendly fixture. Read through this preview for more information about this game and also find out how we have tipped the teams to perform on matchday.

We have tipped these teams to score against each other on matchday. Both sides have suffered serious defensive mishaps in recent games. For example, Tanzania lost three of its last five games while the visitors were defeated in four of their five outings. It is the first meeting between these teams, so expect a fairly even friendly fixture where both teams will likely find the net.

The hosts should be in a good position to find the net first in this friendly encounter. While we expect friendly fire from both ends, Tanzania looks better defensively and even in scoring goals. Moreover, massive home support in Dar es Salaam should be motivating enough to see the hosts get on the front foot in this game.

Based on the current FIFA rankings that put Tanzania at position 132 and Central African Republic at position 130, we would have expected a tough duel in this encounter. The fact that these teams also meet for the first time is a good reason to look forward to this game as it will be mostly centered on the quest for supremacy.

Looking at the latest stats from both sides, Tanzania leaked 7 goals in the last five games while Central African Republic leaked 8. Interestingly, all the three losses by Tanzania in the last five games were on home soil. With that, backing the visitors to find the net at least once in this game is a probable outcome. Moreover, of the seven goals that the hosts leaked in their last five fixtures, six were on home soil.

On the flip-side, the visitors four of their last five outings, three of which were away defeats. We don’t expect a tough opposition from Central African Republic, especially if we compare their recent run of form to that of Tanzania. This should be an even game with both sides likely to take their chances on matchday. 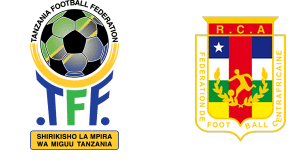 The venue for Tanzania vs Central African Republic will be Benjamin Mkapa National Stadium in Dar es Salaam.

Which side are we backing to win the game?

The hosts should make their most of home support to collect the three points.