It's been a while, but the time has come for Tottenham Hotspur to sign some players.

Granted, they've done just fine after not having added to the squad last summer, securing fourth place in the league as well as reaching the Champions League final, toppling Borussia Dortmund, Manchester City and Ajax along the way.

Their European adventures have done little to paper over Mauricio Pochettino's threadbare squad. After all, having kept pace with Manchester City and Liverpool earlier in the season, they finished just one point above fifth-placed Arsenal.

Indeed, 13 defeats suggest that recruitment will be key to their chances in 2019/20.

One of their top targets, if reports are to be believed, is Lyon midfielder Tanguy Ndombélé. If true, Spurs are barking up exactly the right tree.

For the 22-year-old is an exceptional talent; quick, strong, agile and creative, he would represent both a smart replacement for Mousa Dembélé, who left in January, and an upgrade on Pochettino's current midfield options.

According to Téléfoot, Spurs are in ‘pole position' for the France international's signature. Lyon president Jean-Michel Aulas has claimed to have been in contact with Paris Saint-Germain, but despite what he may have you believe, it's difficult to see why he'd want to further strengthen the best team in Ligue 1.

Ndombélé is likely to cost Spurs £87million. That's significantly north of their club-record £42million outlay on Davinson Sánchez. Given the midfielder's age and potential, though, that was always likely to be the asking price in today's laughably inflated market (Crystal Palace, for example, believe Wilfried Zaha is worth £100million). 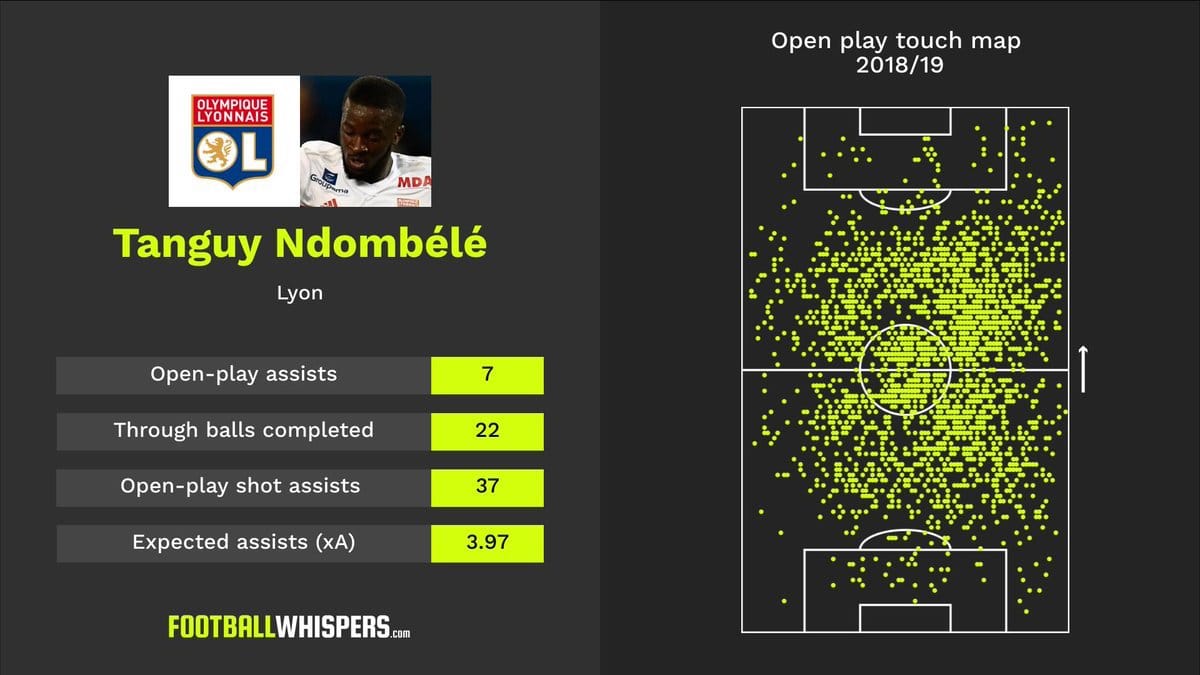 In short, Ndombélé is one heck of a player. A wonderfully dynamic and progressive midfielder, whereas Dembélé was effortless power, the Frenchman is all-action, constantly looking to break lines and create angles.

His two seasons at Parc Olympique Lyonnais have seen blossom into one of Ligue 1's most creative midfielders. Since the start of last season, he's notched 13 assists from open play, ranking him second during that time period (only Dimitri Payet has more).

One of his most attractive aspects, from a Spurs perspective, is the ability to drop deep, collect the ball from the centre-backs and drive forward with speed and precision. Ndombélé has become renowned for inviting pressure before spinning away from challenges in tight spaces.

Incredibly confident on the ball, he can take two or three players out of the game using his close control, agility and awareness of space (particularly behind the pressing player). ‘Transition' is often heard in modern football parlance; Ndombélé is one of the best at making that much-coveted smooth transition from defence to attack.

And when he pops up in more advanced pockets of space, he tends to deliver. Just look at his assist for Moussa Dembélé in Lyon's recent 3-0 win over Marseille below. That was no isolated incident; he boasts 85 per cent accuracy for passes into the final third.

Ndombélé ruled that game, completing more dribbles and winning more duels than any other player. Given the sheer audacity of his pirouetting assist, his confidence is clearly sky-high.

It's important to contextualise any potential move, of course. Assuming Pochettino stays at Spurs, the young Frenchman would be incorporated into a different system while adapting to a new league.

Crucially, though, he has had the benefit of occupying a variety of roles under outgoing Les Gones boss Bruno Génésio, having played as part of a double-pivot with Houssem Aouar, a three-man midfield and further up the pitch in support of the main striker. 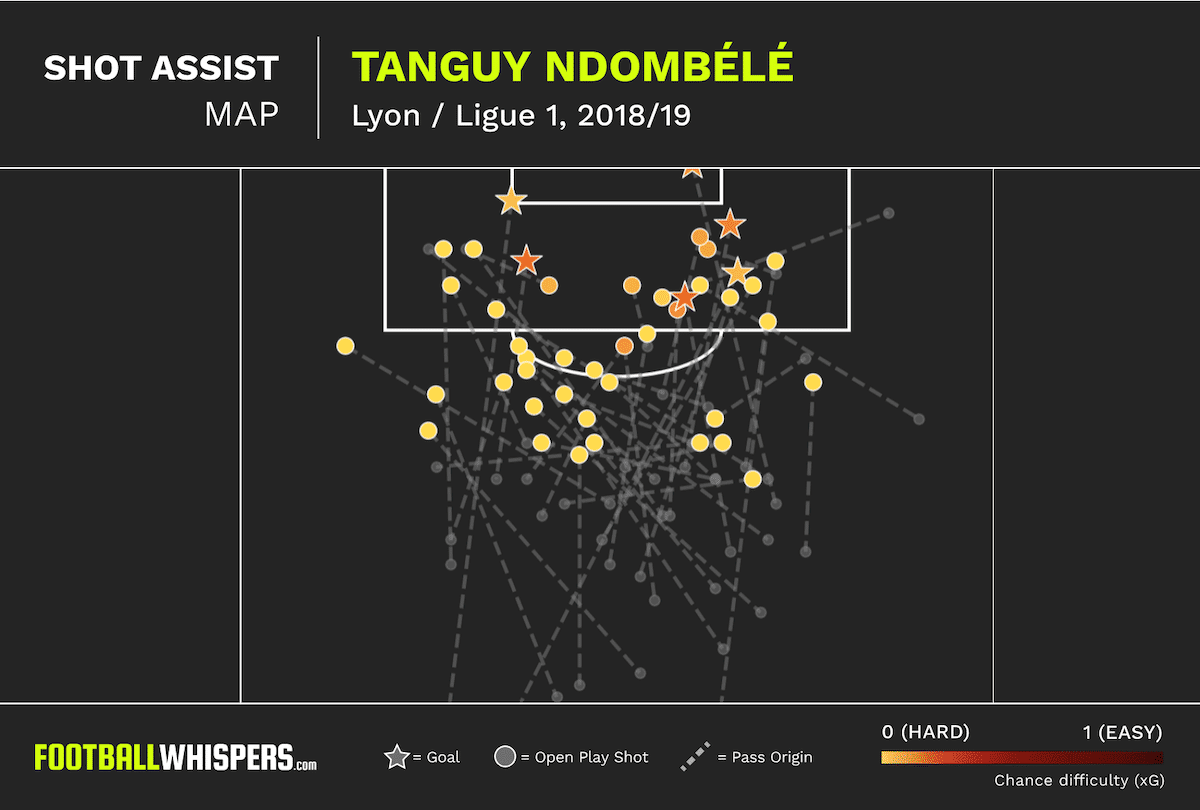 He has shown the creative tendencies needed to fulfill the attacking No.8 role as well as the defensive solidity to slot into the No.6. The prospect of being able to utilise him as either a box-to-box operator or deep-lying playmaker at least partially explains his hefty price-tag.

Of course, Poch's preferred formation is 4-2-3-1 although the Argentine has tinkered, experimenting with a 4-4-2 diamond and an attack-minded 4-3-3 this season. It's easy to imagine Ndombélé slot in beside Moussa Sissoko further back in a 4-2-3-1 but, with Eric Dier and Harry Winks also capable of that role, the Lyon man would perhaps be best used further forward, especially if Christian Eriksen departs. 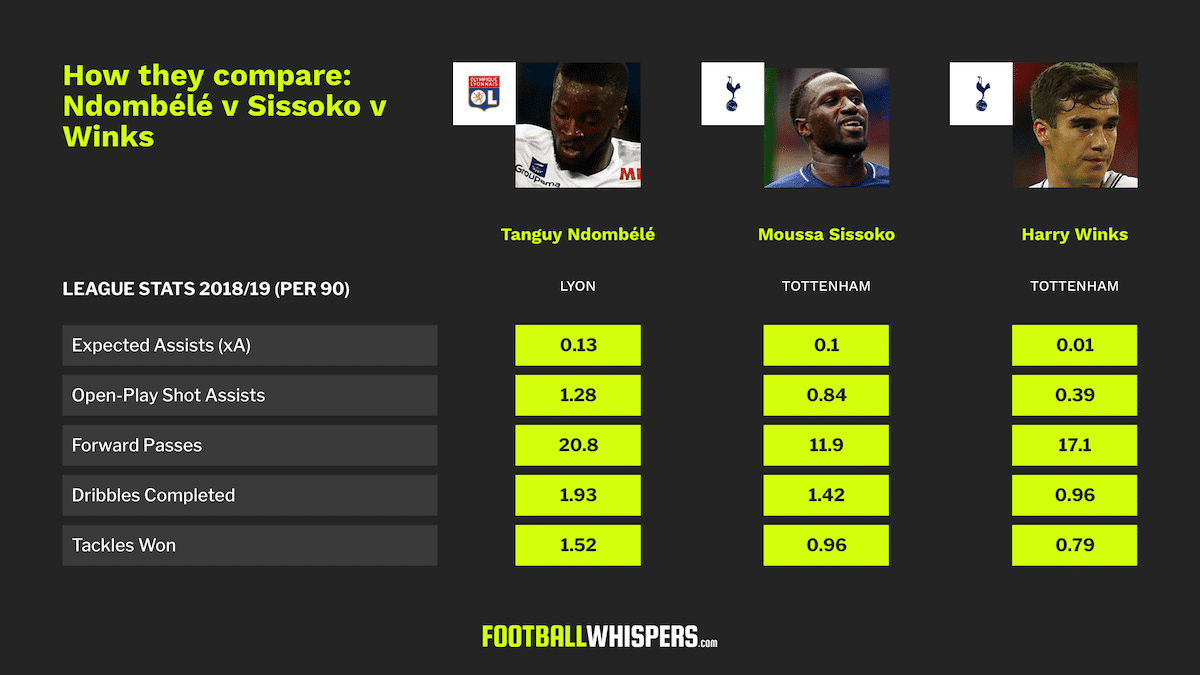 Ndombélé would certainly offer a different skill-set. Dier is a dependable defensive shield but lacks pace and an imaginative range of passing. Sissoko, whose rebirth has been one of the most endearing aspects of Spurs' season, is a delightfully lung-busting presence but can't offer Ndombélé's poise.

We're living in the age of game-changing transfers. Virgil van Dijk and Naby Keïta were inspired acquisitions for Liverpool was inspired, Aymeric Laporte was the perfect man for Manchester City while Arsenal have formed one of the most potent attacking duos in Europe in Pierre-Emerick Aubameyang and Alexandre Lacazette.

It's high time Tottenham made their own major transfer statement. They can search far and wide, but it's unlikely they'll discover a midfielder as impressively rounded and supremely gifted as Ndombélé.