As the weeks passed the goals kept on coming. To many it was a surprise. Yet the most ardent of Chelsea supporter wouldn't have been shocked by Tammy Abraham's impact on loan at Bristol City.

The 19-year-old is a pure goalscorer. A striker who finds himself in the right place at the right time in the penalty area – a skill that is virtually impossible to teach.

It's why Abraham has such a bright future ahead of him. He will score goals, no matter what team he plays in.

For Chelsea's youth sides, the Under–18s and Under–21s, Abraham struck 74 goals in 98 games. An impressive record.

But the Blues have an Academy which is the envy of many clubs in Europe. Their Under–18s have reached six consecutive FA Youth Cup finals, so it's little surprise a striker like Abraham scored regularly in such dominant teams.

It's why his move to Bristol City last summer provided such intrigue.

The Robins, who had finished the 2015/16 campaign in 18th, would be the underdog in the majority of their matches, the side expected to be on the back foot. How would Abraham adapt?

His first full 90 minutes for the club provided an emphatic answer. Abraham scored the opener and then snuck a 95th minute winner against Burton Albion.

Both goals were scored inside the six–yard box. Both were scrappy. And both were decisive.

It was the perfect start for Abraham yet the goals didn't stop there. By Valentine's Day he had scored 21 times, but a hamstring injury suffered against Leeds United meant he missed five games, none of which Bristol City won.

He returned and finished the campaign with five goals in his last ten matches. Abraham ended his first professional season having struck 26 times. Perhaps more importantly, however, his all-round game improved drastically.

Abraham his naturally quick and has an excellent touch but he became adapt at linking play and now uses his frame to shield the ball from opposition defenders.

His decision making when in possession also developed while his instinct in the penalty area only became sharper.

And he is always willing to learn. Bristol City assistant coach Dean Holden told ESPN that Abraham always wanted to know how to gain an advantage on his opposition centre-backs.

He said: “He (Abraham) wants to go to the very top and he knows to do that he needs different strings to his bow.

“He'd talk to us about the centre-backs he'd be playing against, what their strengths and weaknesses were and what he could do against them, which runs to make, etc. He'd want to know as much information as possible.”

Given those traits, it's little wonder Abraham is a Swansea City transfer target this summer.

Last season proved Abraham is comfortable in the Championship – he struck 38 per cent of Bristol City's league goals – so another stint in England's second tier wouldn't be beneficial.

He needs a season of Premier League football to continue his development but that is highly unlikely to come at Chelsea, especially considering Michy Batshuayi, a Belgian international, has only played 603 minutes of football this season.

The Blues have also been linked with a move for Celtic's Moussa Dembélé, so Abraham's path to the Chelsea first-team could well and truly be blocked – although his record in the Championship is far better than the Frenchman's. Abraham outscored the £40million-rated striker 23 goals to 15.

The England under-21 international hasn't been short of potential suitors this summer but he has to make sure he makes the right move. He is by far the finished article and needs game time to continue his rapid progression.

A starting berth at Swansea would be far from certain should Fernando Llorente stay in Wales.

The Spaniard scored 15 goals in his debut campaign in England, his goals, along with Gylfi Sigurðsson, kept the Swans afloat. 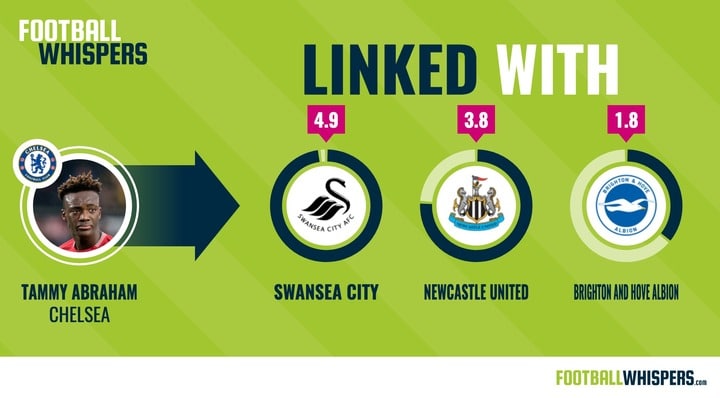 And if he was to simply sit on the substitutes' bench and make occasional starts in the cup competitions, then he may as well do that at Stamford Bridge under the guidance of Antonio Conte, who is understood to be an admirer of the youngster.

So Chelsea have to get Abraham's next move right. If they can, and the England Under–21 international makes the step up once again, then the Blues will have a homegrown striker who could lead their attack for years to come.