A number of them will never play Premier League football.

That will always be a point of contention for football fans who aren’t particularly fond of the Blues.

It is worth pointing out though that two of the regular starters for Antonio Conte’s side last season had themselves been part of that loan system – with Thibaut Courtois spending time at Atlético Madrid and Victor Moses undertaking temporary moves to Liverpool, Stoke City and West Ham United.

The Blues will surely hope that some of the current loan army will replicate the success of Courtois and Moses.

And perhaps some of the highest hopes are for Tammy Abraham, who was probably the Blues’ most impressive youngster out on loan last season.

And it now looks like he is on the verge of getting a Premier League move, with Newcastle United hopeful of sealing the move by the end of the weekend, according to the Newcastle Chronicle. 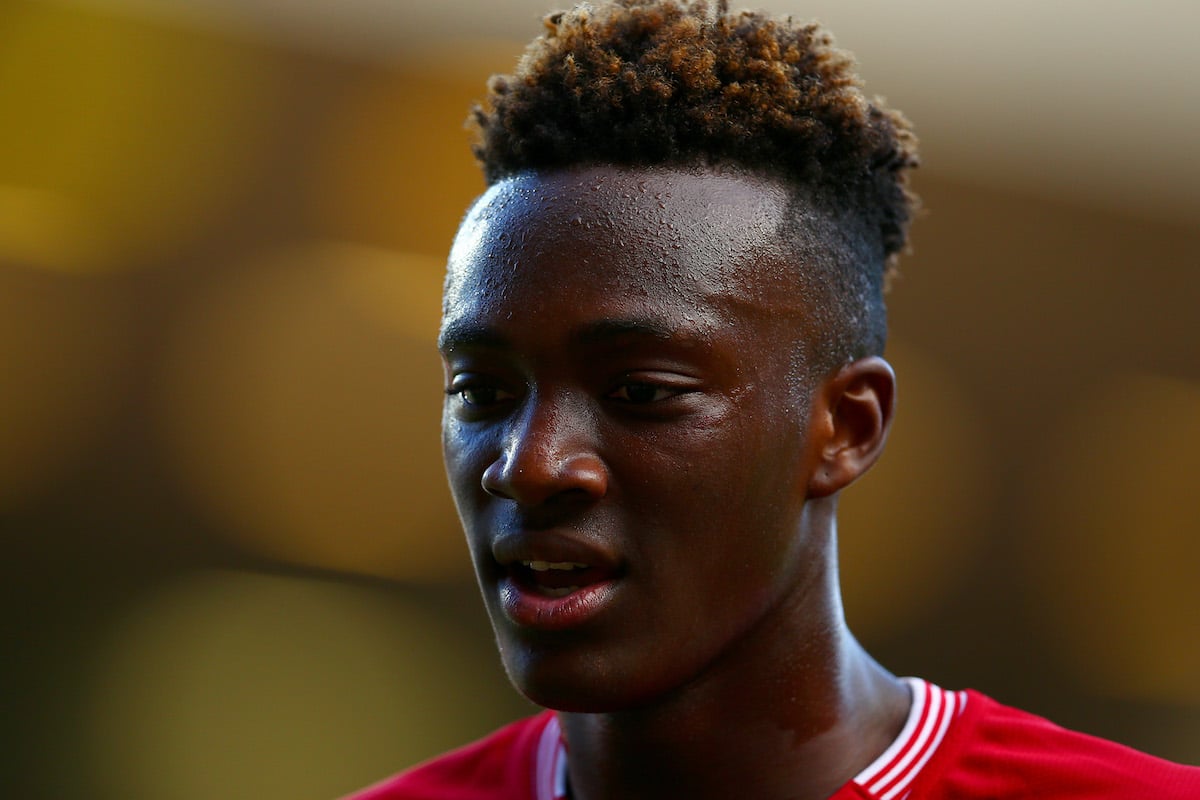 It was perhaps no surprise that Abraham did so well at Bristol City, scoring 26 goals during his loan spell at Ashton Gate, given his great record at youth level.

And given that the Blues have an academy which is the envy of many clubs in Europe, surely they will have to produce a first-team regular that has failed to materialise since the days of John Terry.

Perhaps Abraham can be the man to do that.

Indeed, then Bristol City boss Lee Johnson tipped him to play for England in the future.

“As an England fan, you shouldn't rule anything out,” he said back in October.

“He's an exciting talent for our country, all he can do is keep scoring.”

It’s fair to see he impressed while with the Robins, with then first-team coach John Pemberton comparing him to Ian Wright.

“Ian Wright could create something out of nothing and Tammy is the same with regards to goalscoring,” he said.

“He’s fighting and he just has this knack of getting there when you think he can’t do it, and that is something Wrighty had as well.

“He is like a sponge, he wants to take everything on board.”

And if you look at his goals for Bristol City last season, there is somewhat of the Wrights about him, with his ability to grab a goal from in the box – the ball seems to find its way to him and that’s a skill.

He obviously has a bright future at Chelsea, with Conte recognising this last year too.

“Abraham is another young player, he’s the future for Chelsea, for sure,” he said.

“He’s very young I saw him only one week during the pre-season in America, there we decided to send him to play every game, to get experience, and then come back with us.

“Abraham has a great potential. I think the academy is working very well.”

And the next step of his development will be proving he can score in the Premier League too.

All signs in the Championship suggest he is able to, and under a well-respected coach like Rafa Benítez, you would expect him to head the right way.

Certainly, Chelsea will hope he doesn’t follow the same route as Patrick Bamford.

The Magpies seem to have used their year in the Championship to scout some of the best talents in the league, with Fulham Player of the Season Tom Cairney also believed to be a Newcastle transfer target.

And a loan move for Abraham seems relatively risk free for the Geordie club.

It will also give Abraham the chance to prove he can do it on the big stage, in front of a big crowd, a great atmosphere and an impressive stadium.

How does Abraham compare to Newcastle’s forward options?

We’ve had a look at the 19-year-old compared to the players who started up front the most for Newcastle last season, according to Daryl Murphy. 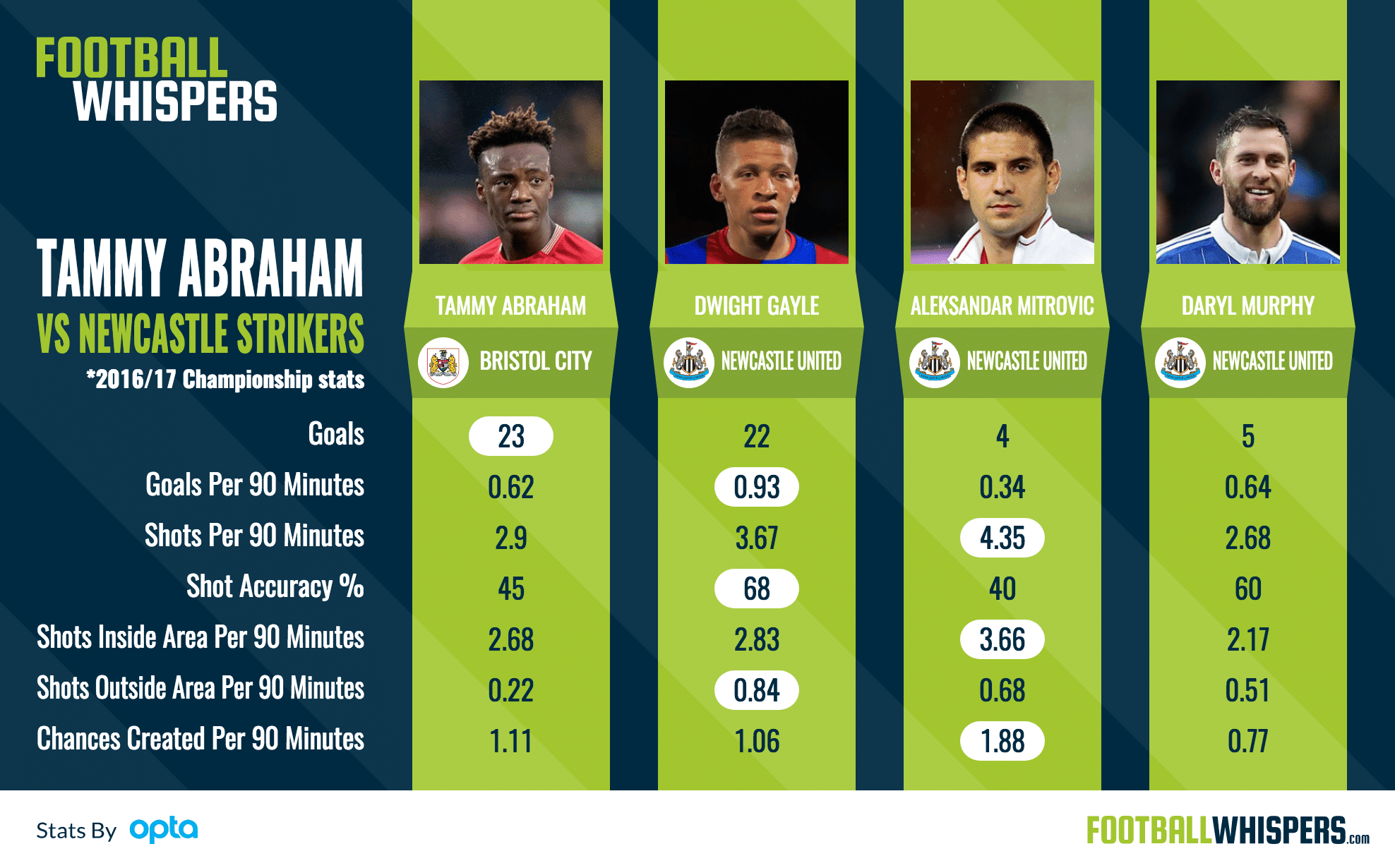 Abraham’s 23 goals was more than any of the Magpies trio managed, with Gayle on 22, Mitrović on four and Murphy on five.

Mitrović also created the most chances for others per 90 minutes with 1.88 – the Chelsea loanee averaged 1.11.

And while they all averaged less than one shot per 90 minutes from outside the box, it’s notable Abraham was the lowest, with 0.22, underlying his poacher’s instinct from within the area.

At 19, he is young and raw and will only improve.

He’s got goals at whatever level he has played at so far and while the Premier League is obviously a step up, the likes of Jamie Vardy will tell you goal scorers hit the back of the net at any level.