It was a move the Bernabéu had seen before, numerous times.

Slaloming through midfield, a breathtaking “roleta” outmaneuvers an overeager defender. On the run goes, approaching the penalty area, drawing the attention of two more opponents, creating space for an opportunistic colleague to break into the box unchecked.

Then it's all about the weight and timing of the pass: holding off just long enough to stretch the opposition out of shape, but not so long that his colleague's burst takes him offside – pausa, they call it at the Bernabéu. The pass is perfect, the finish a formality.

Zinedine Zidane made such moves his trademark during six years as the superstar of superstars, the brightest of Real Madrid's Galácticos.

But this time it wasn't Zidane. It wasn't even one of the expensively acquired men in white. This was Dušan Tadić, a black-shirted black sheep, a 30-year-old Southampton were delighted to take Ajax's £10million for just nine months ago.

The goal, finished by Brazilian winger David Neres, put Ajax 2-0 up against the reigning European champions. Tadić had already assisted the first, for Hakim Ziyech, and went on to score a spectacular third in the Dutch side's 4-1 win, sending them through to the quarter-finals of the Champions League when a 2-1 first-leg reverse left them with little prospect of progression. 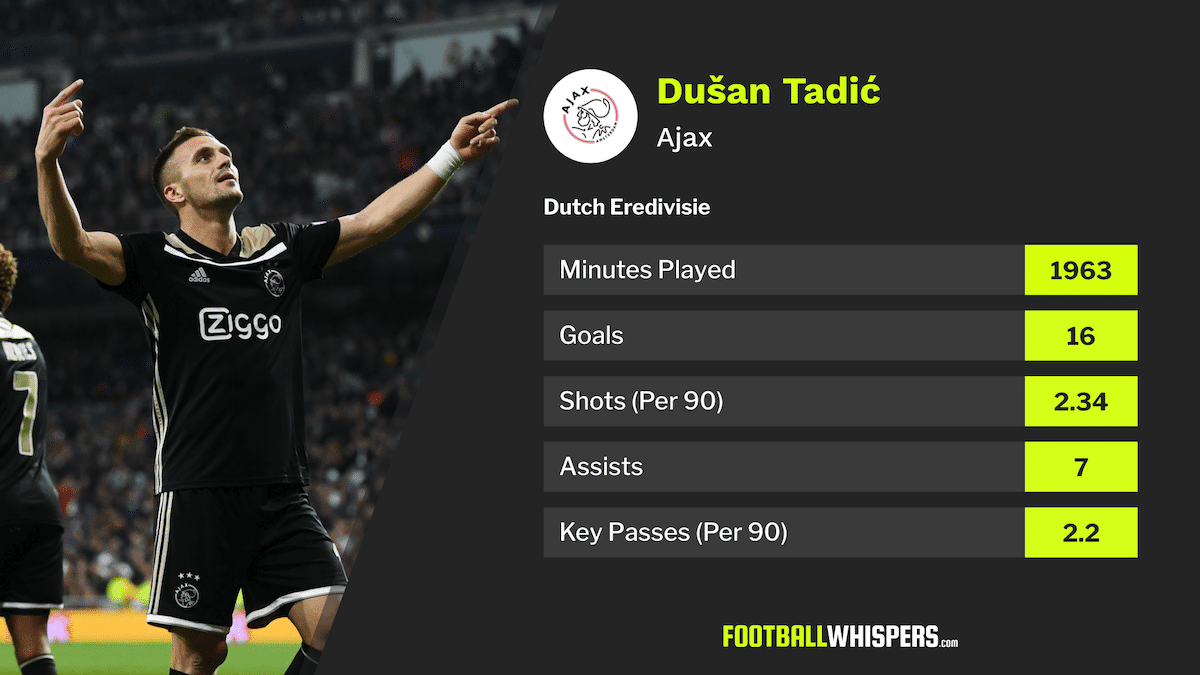 Tadić, deployed as a false 9 at the point of this most vibrant and fluid attack, was exceptional. So key was the Serbian creator to ending Real Madrid's 1,012-day reign as kings of Europe on their home patch that L'Equipe rated his performance a 10 out of 10, only the ninth time the French newspaper have ever awarded a perfect mark in their notoriously finicky ratings.

The Tadić on show in the Spanish capital on Tuesday night will have been largely unrecognisable to Southampton fans. His most productive season of the four campaigns he spent at St Mary's was his second, in which he produced seven goals and 12 assists in 34 Premier League appearances. But he was ordinarily much less effective.

Of course, his numbers have jumped up dramatically since returning to the Eredivisie, where the quality of opposition is much lower than in England's top flight. But this alone does not fully explain the 30-year-old's vast improvement at Ajax, nor how he has gone from being a player few at Southampton mourned the loss of in June to someone capable of dismantling the European champions.

In his last two seasons with Southampton, Tadić contributed just nine goals and eight assists in 69 Premier League games; with Ajax this term, he has scored an incredible 23 goals and provided ten assists, included six strikes in the Champions League.

More than just a case of beating up on inferior Dutch sides, he has scored against Real Madrid, Benfica, Feyenoord and twice against Bayern Munich.

At Southampton, Tadić was always a reliable creator, but – particularly after Ronald Koeman's departure – he was never allowed to settle in a favourable role, shifted between both flanks and the No.10 position. Post-Koeman, the gifted attacker was under-utilised by a succession of cautious, defence-first managers, from Claude Puel to Mauricio Pellegrino and Mark Hughes.

Ajax manager Erik ten Hag, who previously worked alongside Pep Guardiola while in charge of Bayern's second string, has a much more expansive and expressive approach; he, in keeping with Ajax tradition, encourages fluidity and flexibility, and always aims to attack; including their triumph in Madrid, Ajax have scored four or more goals in 14 games this season.

All around him, Tadić finds a cast of able attackers in Amsterdam. Although he has also been asked to operate in a number of roles at Ajax, just as he was at Southampton, the his team-mates and the system always provide him the tools he needs: when on the left wing, the forward rampages of left-back Nicolás Tagliafico allow him the freedom to move inside; as a No.10, he has reliable finishers to service all around him, from strikers Kasper Dolberg and Klaas-Jan Huntelaar to Neres out wide and Donny van de Beek and Ziyech breaking from midfield.

Tadić was Southampton's most creative player throughout his time with the club; he produced the most key passes per 90 minutes in each of his four seasons on the south coast. But the chances he conjured were too often squandered; Southampton had the worst conversion rate in the Premier League in 2016/17, and were second-worst last season, ahead only of relegated West Bromwich Albion.

And the innovation of playing Tadić as a false 9, a tactic which proved so effective in both legs against Madrid, is a discovery it is almost impossible to imagine having been made during his final seasons at St Mary's.

Ajax have their best goal-per-game average this season since the great Marco van Basten was leading the line at their old De Meer stadium in the mid-1980s. Having scored or assisted in 25 games already, Tadić has been vital to this attacking productivity.

There were other standout performers among Ten Hag's side at the Bernabéu, with 19-year-old centre-back Matthijs de Ligt mountainous in the protection of their goal, Hakim Ziyech typically scheming and Barcelona-bound Frenkie de Jong delighting supporters of his next club with a virtuoso dominance of opposite numbers Toni Kroos and Ballon d'Or winner Luka Modrić.

But Tadić stood above all. He was the one who offered relentless incision. He was the one to toy with Madrid, allowing them enough of a sight of the ball to tease them into believing it could be won, only to then spin or saunter away, off to create another chance or test Thibaut Courtois in the home goal.

No player could match Tadić's five chances created on the night, nor his four successful dribbles. A mark of his ruthless efficiency, he landed both of his attempted shots on target, scoring once. With his reliable touch and ability to shield the ball, he was Ajax's outlet in – admittedly rare – times of stress; when they flooded forward, he dropped deep from the front line, linking play and creating space for others.

There are 730 miles between Southampton and the Bernabéu, but there is a whole world of difference between the Tadić who tore apart Real Madrid and the player the Saints sold to Ajax last summer.

His form this season is testament to how the right system and setting can transform a player, and how even an experienced player can improve, adapt and defy what has been assumed of them. The truths of the Premier League are not absolute.