West Ham United's drawn-out search for a striker appears to be coming to an end with Manchester City's Kelechi Iheanacho rumoured to be close to completing his £20million move.

With that monkey off of his back, Hammers manager Slaven Bilić can turn his attention towards acquiring players who can provide his new striker with the ammunition he needs. According to a report by the Evening Standard, Southampton's Dušan Tadić is a target.

It's expected to be yet another summer of change for the Saints with long-term Liverpool transfer target Virgil van Dijk, Shane Long, Ryan Bertrand and Fraser Forster all linked with moves away from St Mary's.

Furthermore, reports over recent days have suggested former Borussia Dortmund manager Thomas Tuchel is going to replace Claude Puel in the hot seat. The links to the German manager emerged just days after Puel was said to be in talks with Saint-Etienne over a return to France. 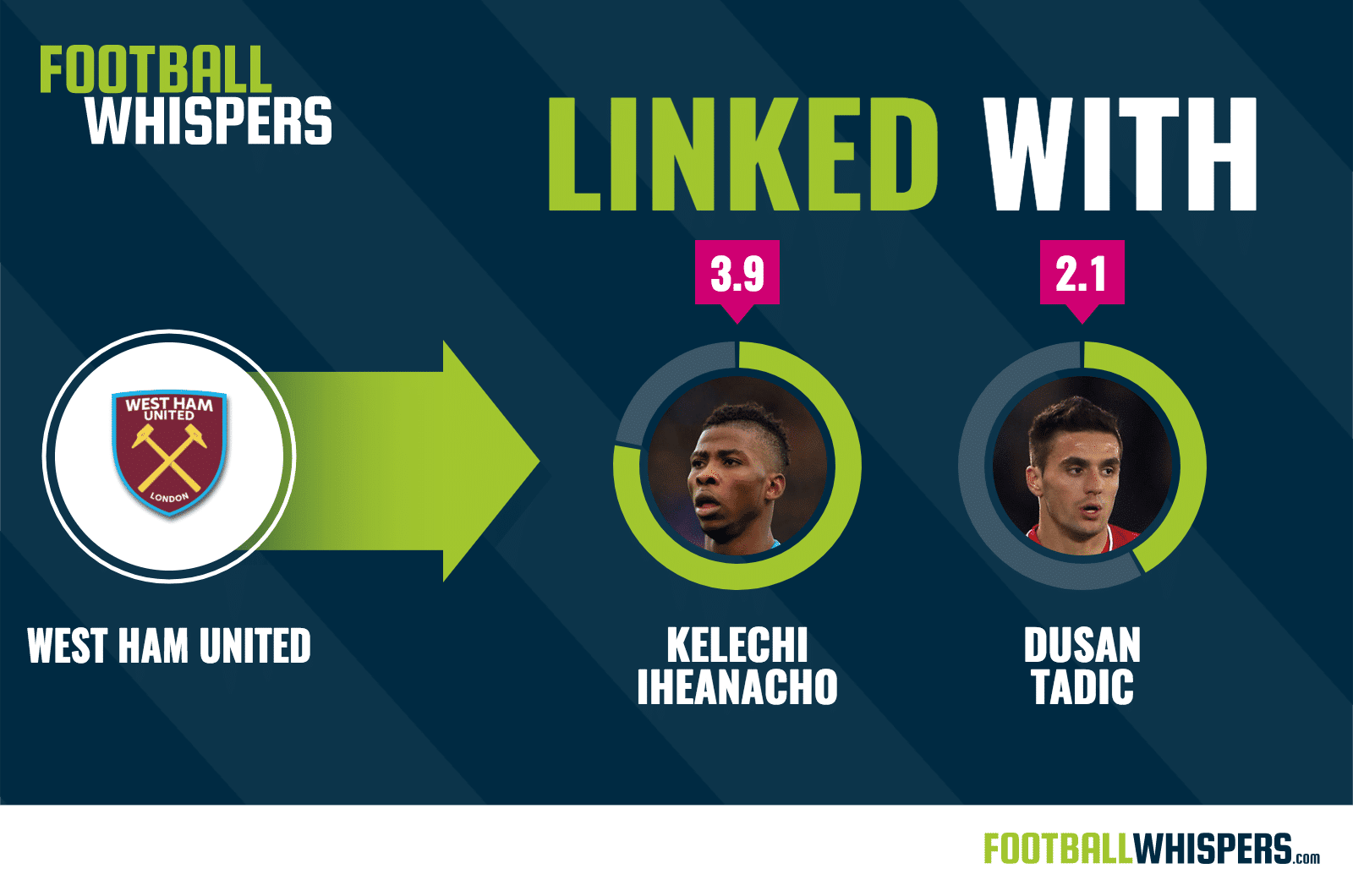 The ex-Twente playmaker spoke out against Puel earlier in the season due to the Frenchman regularly substituting him. That planted the seed that the Serbian could be on the move this summer and now West Ham are favourites to land him.

Manuel Lanzini stepped into Dimitri Payet's shoes after the French maestro returned to Marseille. The Argentine is reportedly a transfer target for Arsenal after really stepping it up this season.

The issue, however, is nobody managed to fill Lanzini's now vacant spot as second in command. Sofiane Feghouli showed promise but was inconsistent in his first season in England; Andre Ayew's early injury derailed his season and he's not so much a creator as he is a wide forward.

The Hammers went from having Payet and Lanzini to just being able to call upon the latter. A magian always needs an assistant. That's meant as no disrespect to Tadić, who can clearly hold his own, but two is always better than one.

Both can shoulder the creative burden meaning the club aren't solely reliant on one of them putting in a performance.

The 28-year-old knows the league and has played alongside a variety of strikers meaning he's just as comfortable playing behind Andy Carroll as he would be Iheanacho.

After all, he managed to provide service for Graziano Pellè and Shane Long – two different players completely.

That can't be said for many playmakers in England.

How does Tadić compare? 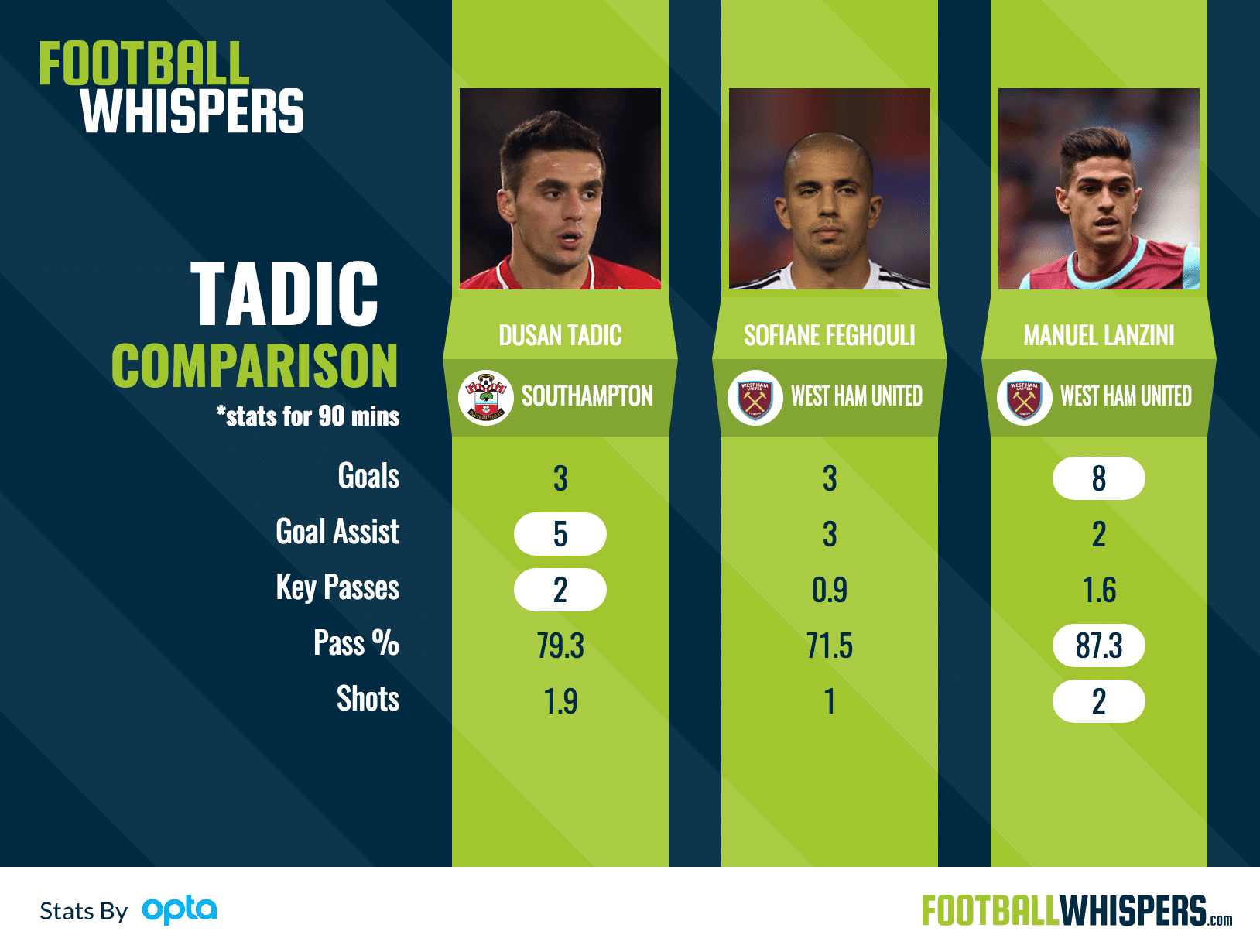 Last season was a disappointing one for the Saints in general and Tadić wasn't at his creative best, involved in just eight goals — his worst return since moving to England.

Yet, despite his inconsistent season, he still finished the campaign with more assists (five) than his West Ham counterparts. In fact, he assisted as many goals as Feghouli and Lanzini combined. He also played more key passes per 90 minutes (two) than the West Ham duo.

The Southampton man, alongside Swansea's Gylfi Sigurðsson, is one of the most underrated talents in the Premier League. During his first season in England, the 2014/15 campaign, he was involved in 11 goals but he followed that up with seven goals and 12 assists the year after.

He was involved in a third of the team's goals and has since gone from being instrumental to being misused. However, it does go to show how influential he can be if he's given the platform and backing of a manager.

Since his move from Holland to England, Tadić has racked up 14 goals and 24 assists in three seasons. You're looking at around five goals and eight assists per season, on average, which isn't an impressive number.

If he's given a run in the first-team in a consistent system then he could even replicate his last season in the Eredivisie which seen him involved in 30 goals in 33 starts. It's a long-shot but the Premier League is yet to see the best of the Serbian.

Tadić's current deal on the south coast runs until 2020 but as they've shown every summer since their return to the top flight of English football, the Saints are a selling club.

Southampton parted with close to £12million in the summer of 2014 to bring the Serbian in as a replacement for the Liverpool-bound Adam Lallana. An offer close to £20million could be enough to convince them to sell thier talented attacker.

Tadić and his wand of a left foot could be the perfect foil for Lanzini and Iheanacho in Bilić's new look West Ham attack.