Despite playing for one of the worst teams in Premier League history, Idrissa Gueye gained widespread acclaim for his individual performances for Aston Villa throughout 2015-16. While questions regarding the Senegalese international’s abilities to repeat that form in a better team remained, few would have been surprised to see a host of clubs chase the 27-year-old’s signature this summer. He had, after all, been mentioned in the same breath as then-Leicester City gem N’Golo Kante throughout large portions of his debut season on English soil.

For one man, those comparisons started long before Kante powered the Foxes to football’s greatest fairytale. As head of recruitment at the King Power stadium, Steve Walsh had been an instrumental figure in spotting a number of Leicester’s eventual Premier League champions, with the French midfielder topping the summer 2015 drive. Manager Claudio Ranieri openly concedes that Walsh’s relentlessness was the key to completing a deal for the player widely accepted as last year’s signing of the season.

Prior to setting the crosshairs on the PFA Team of the Year star, however, the scout had tried to sign Gueye from former club Lille. Walsh had identified similarities between the two stars during their respective careers in France, and had rightly predicted that both could transport those qualities across the Channel to take the Premier League by storm.

It’s difficult to imagine a single Leicester fan lamenting the fact that Gueye joined Villa for a fee in the region of £9m as they ended up with the player that would provide the engine as they raced to the Premier League crown. Nonetheless, Gueye was undoubtedly a diamond find in 2015-16, even if his individual heroics were made in vain. 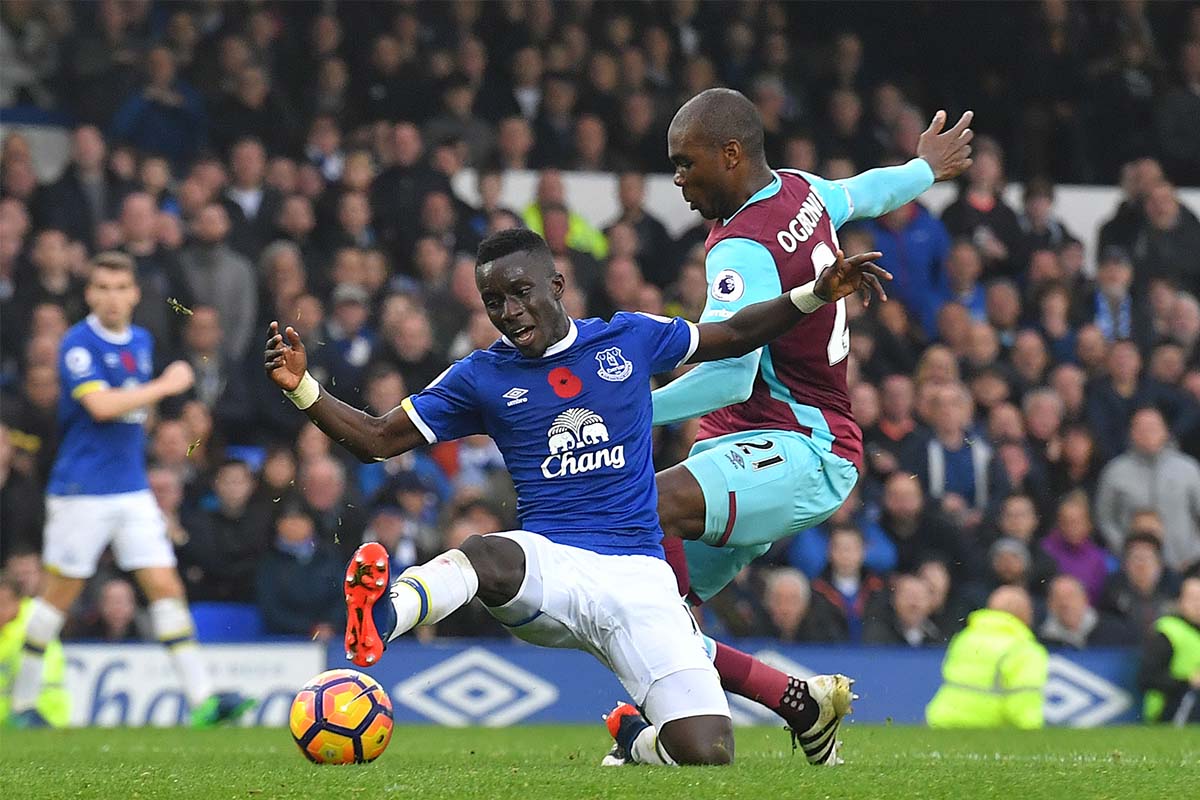 Like Kante, Gueye arrived on English shores as somewhat of an unknown quantity. Aside from winning Ligue 1 in his breakout season of 2010-11, most pundits and supporters knew very little about the former Lille midfielder. His statistics in France, again, like Kante’s, offered reason for optimism but that doesn’t always transfer to the Premier League –- as anyone who has ever endured the misfortune of watching Marouane Chamakh, Gervinho, or Modibo Maiga will attest.

While the fortunes of their respective clubs couldn’t have been further apart, last season’s individual statistics confirm that Walsh was right to have pinpointed both players as potential superstars. Kante may have topped the charts for tackles as well as interceptions in 2015-16 but Gueye was a very close runner-up, which is all the more impressive due to his inadequate surroundings at Villa Park last term.

The then-Aston villa man registered 108 tackles and 140 interceptions — Kante’s stats were 125 and 156. As the sorry Villans trudged off of the Emirates pitch on the final day following a 4-0 annihilation at the hands of Arsenal, the same club that they had faced in the previous season’s FA Cup final, Gueye was the only player that could reflect on his personal displays with anything other than utter embarrassment.

He may be diminutive in stature but he was more than prepared to fight for the cause, even when it was clearly a lost battle. After a positive maiden season in England, at least from an individual viewpoint, a summer exit from Villa Park was already explicitly evident.

Frankly, it’s no surprise that, after joining Everton as director of football, Walsh’s priority was to encourage his new club to take advantage of Aston Villa’s demise by signing Gueye. In truth, manager Ronald Koeman needed little persuading, capturing the midfielder on a four-year deal after triggering a £7.1m release clause.

It’s a slight disservice, and arguably a slightly lazy analysis, to judge Gueye exclusively in comparative terms against Kante. On the other hand, it’s clear to see why so many continue to draw those parallels. Aside from the Walsh link, there’s also the fact that the Toffees midfield enforcer offers so many of the attributes that made the Chelsea star a Premier League winner.

In addition to his individual brilliance shielding Wes Morgan and Robert Huth, as well as turning over play to start Leicester’s quick counter attacks, Kante was the catalyst that allowed team-mates –- not least Danny Drinkwater –- to thrive. While it’s still early days, Everton’s belief that Gueye could play a similar role at Goodison Park has paid dividends thus far.

Gueye’s energetic tenacity has been the perfect solution to the problem of Gareth Barry’s ageing legs, affording the vice-captain an opportunity to play his game with far greater authority. A lack of balance under Roberto Martinez often forced the veteran midfielder to take on far too much work. Now, with his new partner in crime pressing to win the ball in higher areas, the 35-year-old is enjoying a new lease of life patrolling the lines between defence and midfield.

An instant bond between two players with equal discipline and complementary attributes worked wonders for Everton during the early weeks of the season, as they emerged as one of the early pacesetters. A return of one win in the last seven has seen the Toffees slide to seventh but they remain in the conversation for Europa League qualification, which would be a positive step following Farhad Moshiri huge investment in the club. Gueye, meanwhile, is no stranger to performing in a team that isn’t firing on all cylinders and has continued to show promise throughout the difficult spell.

At the time of writing, Everton’s summer signing leads the Premier League’s chart for completed tackles with 52, underlining the sentiment that those qualities have added solidity to a squad that continually looked defensively vulnerable under Koeman’s predecessor.

Koeman, Walsh, and the Everton board should also be commended for the signing of Ashley Williams. Losing John Stones was an inevitability once Pep Guardiola and Manchester City came knocking, but his replacement offers the no-nonsense defensive authority that Everton require at this stage of their journey. Alongside Phil Jagielka, the Wales defender has, by and large, performed extremely well.

With the Barry-Gueye partnership marshalling the midfield areas with consistent success, the Toffees are a far tighter unit, which has ultimately seen them evolve into a more economical outfit too: only five teams conceded more goals than the Goodison Park club last season whereas only six have shipped fewer in the opening 12 games of the current campaign.

It would be far too simplistic to suggest that Gueye has transformed Everton’s defensive unit. There are, after all, a variety of contributing factors including a change of philosophy under new management. Meanwhile, some of the deficiencies are still visible as a hangover of the Martinez era. Nonetheless, for all the underlying thoughts that this is a work in progress, there is no question that the blue side of Liverpool is following the red half’s lead by becoming a far stronger side than they were 12 months ago.

In addition to better results –- in spite of the current slump — the transition has manifested itself in their performances too; Gueye has certainly played his role in this sense. Given the poor quality around him, the midfielder’s attacking attributes were rarely seen at Villa Park. This season, though, glimpses into those qualities have been more regular.

A wonderfully timed cross allowed Romelu Lukaku to score the first of three goals in an easy win at Sunderland while Gueye’s overall performance in the following game against Middlesbrough was met by Koeman waxing lyrical about his bargain buy. As per the Guardian, the Dutchman labelled that performance “perfect in every aspect of football”.

The direct impacts of boundless energy and meaningful passes, highlighted by his 10 created chances from a primarily defensive-minded position, have made him an instant hit with the fans, but it’s his influence on stars like Ross Barkley, who has himself shown signs of positional maturity, that sets him aside from most.

Since moving from France to England, Gueye has been relatively reserved off the pitch, preferring to let his feet do the talking. A love of winning the ball is the one overwhelming characteristic that shines through. Unfortunately, the flames at Villa Park had grown beyond the point of rescue long before the Senegalese midfielder’s arrival. At Goodison Park, though, his ability to put those fires out has been a major source of positivity in the opening third of the campaign.

Gueye isn’t going to repeat Kante’s feat of driving an underdog to a Premier League title, but his calming influence is a major bonus for the Toffees as they embark on their bid to regain their place as top four contenders. It may take several seasons for the club to realise that dream, but the initial steps have been positive.

Moshiri has made no secrets about his lofty ambitions for the Goodison Park club and has wasted no time in hiring the backroom staff that he feels is capable of delivering. Everton’s biggest battles will be fought on the pitch, though, and the Toffees will need a midfield general to lead them through those wars. With his peak years ahead, Gueye may be the guy.

Buying a player that looked the best of a bad bunch is always risky business but, even at this early stage, Everton’s capture of Gueye looks to be a candidate for signing of the season.

Keep up to date with the latest Everton transfer rumours.