The 2017/18 Premier League season is just four games old and already the top three has a familiar air about it, with leaders Manchester United followed up by Manchester City and Chelsea. However, beneath them are a number of potential surprise packages.

Watford, rejuvenated by the appointment of Marco Silva, sit proudly in fourth, while Burnley occupy seventh place. Between those two sides is an even more unexpected high-flyer, Huddersfield Town.

The Terriers, who were promoted from the Championship via the play-offs last term, are sixth in the current standings.

They have lost just one of their opening four fixtures, away to a West Ham United side desperately seeking points to kick-start their campaign. Before that 2-0 defeat, they won 3-0 away to Crystal Palace, 2-0 at home to Newcastle United, and drew 0-0 with Southampton.

There is a great deal of excitement surrounding Huddersfield’s fast start. Here we analyse the performances behind the results, consider what makes them such an effective team, and take a look at the key players and statistics underpinning the good form.

A TACTICAL GUIDE TO HUDDERSFIELD

“We want speed in our game,” Wagner told The Set Pieces in an interview earlier this year. “Everything full throttle, we want aggression, we like to press high, we like to keep the ball, we like to show emotion.”

On the basis of the above, as well as his nationality and previous work with Borussia Dortmund, it’s easy to see why the 45-year-old German has been compared to Jurgen Klopp. And, just as Klopp’s Liverpool receive plaudits for their style and effectiveness of their play, so too do Wagner’s Huddersfield.

They line up in a rough 4-2-3-1 shape, though this morphs depending on the phase. Defensively, it often looks more like a 4-4-1-1, with Tom Ince supporting fellow new signing Steve Mounié, while offensively it appears to be a rough 2-4-3-1.

The attacking shape is based on the advanced roles of both full-backs, usually Tommy Smith on the right and Chris Löwe on the left. Both players occupy high positions on their respective flanks, which allows nominal wingers Elias Kachunga and Rajiv van La Parra to drift infield.

The full-backs’ movement is supported by the positioning of the central midfielders, Aaron Mooy and Philipp Billing, who often stay close to the two centre-backs during the build-up of possession. The central midfield duo take it in turns to drop back alongside or between the central defenders, aiding them in retaining possession when under pressure.

With a stable base to build upon, Huddersfield’s more advanced players have a good amount of freedom to move laterally and vertically, occasionally rotating positions. This keeps the opposition guessing, without clear reference points should they wish to man-mark.

Kachunga is highly effective in this respect, often moving up to join Mounié on the front line and then dropping back out to drag defenders with him. This can be seen in the below graphic, where he pulls his marker with him and creates space to be attacked between Newcastle’s centre-backs. 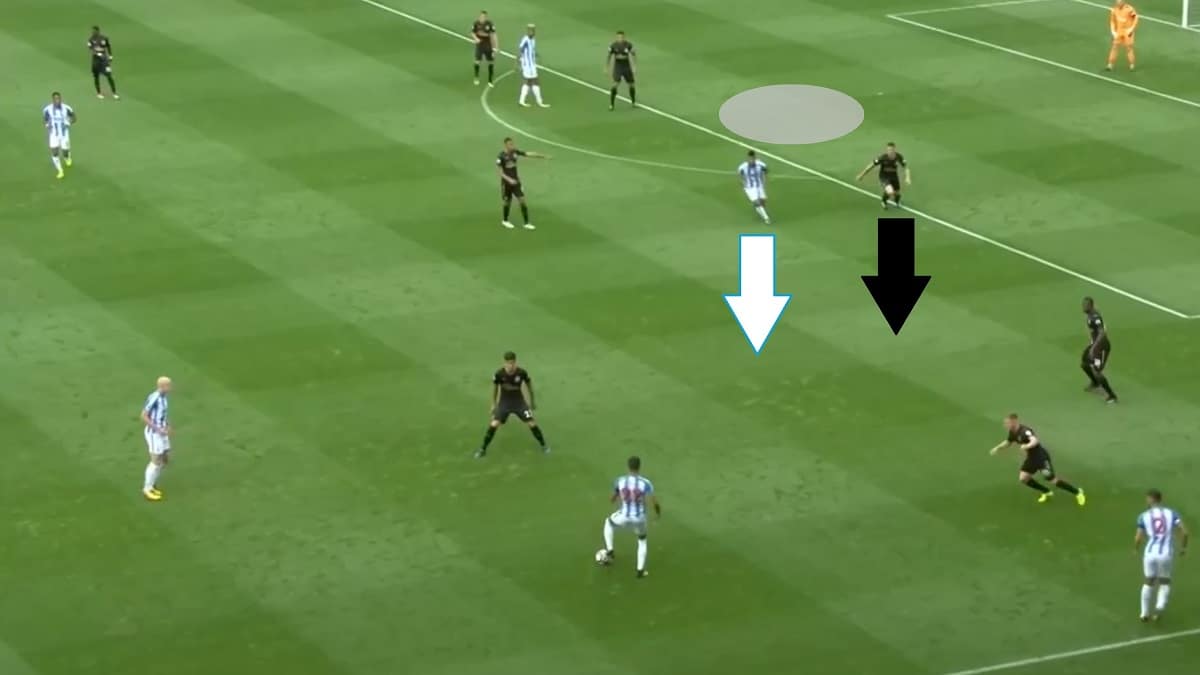 The German, who joined the club permanently in the summer after a successful loan spell in 2016/17, has spoken about this particular aspect of Huddersfield’s style before, telling The Guardian:

“For me the versatility is good. We have a lot of good lads up front so in the game sometimes I can go forward in the middle or outside on the wing and that makes it hard for the opponent to know which position a player is going to appear in. That helps make us strong.”

Ince takes up the central attacking midfield role and plays an important part in his team’s progression of the ball through the middle third of the pitch. Sometimes he will drop deep, using his technique and control to combine with team-mates; at other times he will look to make runs behind the opposition midfield line.

One example of the 25-year-old’s intelligence off the ball is shown in the below graphic. Seeing van La Parra come inside with the ball, he takes advantage of the West Ham midfield’s distraction. He identifies the space behind them and instructs his team-mate to play the ball there, running on the blind side to receive. 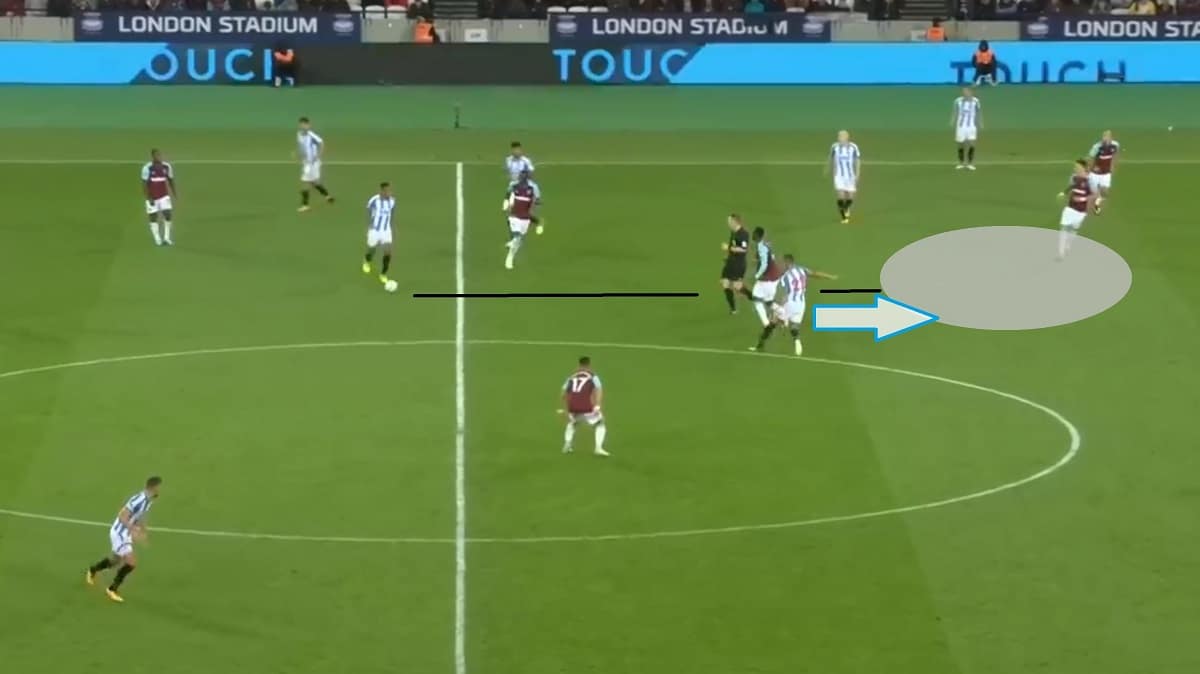 Ince also moves across the pitch, from wing to wing, in order to stay close to the ball and open up the possibility for combinations with the relevant ‘winger', whether that be Kachunga or van La Parra. The former Derby County man’s work without the ball is important to the efficiency of his team’s attacking game.

Defensively, Huddersfield press high, with Ince often acting as one of the key instigators of the team’s pressing. He and Mounié look to manoeuvre the opposition ball-player into making passes wide, rather than through the centre of the pitch. Then, once the ball is on the wing, it is easier to force long balls and turnovers.

Mooy is also vital in this phase, with his strength, energy and commitment matched by an understanding of how to use his body positioning to provoke errors. He often steps out of the midfield line to join in the high press.

Huddersfield look to cut off the opposition ball-player’s breathing room, taking away their passing options and forcing them into aimless balls over the top. An example of this is seen below, where the Newcastle left-back has no immediate options available to him and thus opts to hit the ball long. 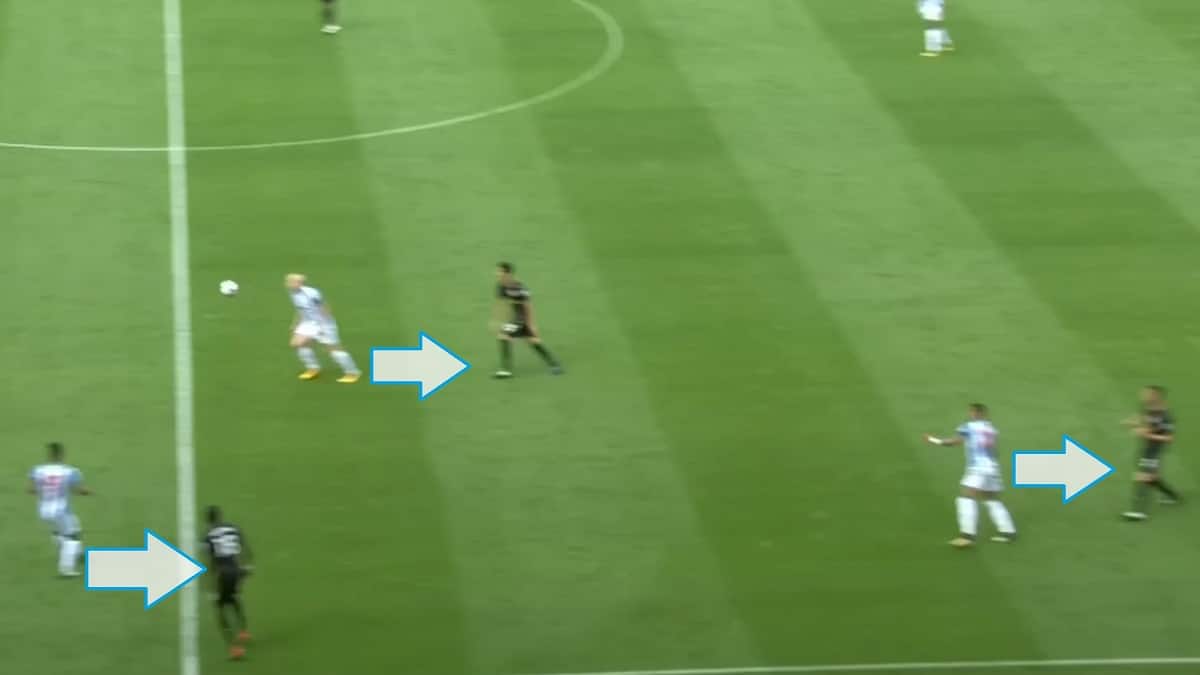 The four-man defensive line all man-mark attentively, following their individual opponent even should they drop back to the halfway line. This reduces the space available to the opposition in the final third and makes it difficult for them to build attacking moves cleanly.

WHAT DO THE NUMBERS TELL US?

Last season, only two Championship teams – Fulham and Reading – had higher average possession numbers than Huddersfield’s 55.6 per cent and pass success rate of 78 per cent. The Terriers’ high tallies in both of these columns are down to the organisation and efficiency of their passing game, as explained above.

This theme has continued into this campaign. Even at Premier League level, Wagner’s side have managed to Tottenham Hotspur – as well as Southampton, Bournemouth and Crystal Palace.

Huddersfield also lie eighth in the shots on target per game column, again behind last term’s top six and Newcastle. This statistic adds credence to the notion that their possession leads to quality chances, or that it simply lands at the feet of quality finishers.

Even while they focus on keeping and using possession, Wagner’s side are also a varied team with the ball. They are not afraid to play more directly when necessary, something that is confirmed by the fact that their 66 long balls per game is the tenth-highest average in the Premier League.

WHO ARE THEIR KEY PLAYERS?

At the back, Mathias ‘Zanka’ Jørgensen is a central defender who offers more than attentive marking, physical robustness and aerial strength. The Dane is also a sound passer, and his ability to play penetrative passes between the lines has been evidenced several times already this season.

The 27-year-old’s quick adaptation to the Premier League and his team’s style is a testament to Huddersfield’s recruitment. The same could be said of his compatriot, Jonas Lössl, who also joined in the summer window.

The goalkeeper is more than a mere shot-stopper; he is also able to play out from the back with precision and composure. This is backed up by his presence in the top ten Premier League ‘keepers for distribution accuracy, with a 62 per cent success rate.

Further forward, Mooy is the team’s engine in central midfield. His 3.3 tackles per game are bettered only by centre-back Christopher Schindler, proving his aggression is combined with genuine defensive understanding.

The Australian also supports attacks well in various ways, whether by dropping deep to circulate the ball alongside the centre-backs or by pushing forward and making runs in the channels. In both situations his strength and control make him a real asset to Huddersfield.

Finally, Ince is the team’s attacking conductor. His willingness and ability to operate centrally and progress moves with his dribbling, passing and movement off the ball are instrumental to the fluidity and productivity of Wagner’s setup.

Huddersfield are new to the Premier League, though they look anything but out of their depth. They are competing on their own terms, with their own tactics, and appear more than ready to survive in the division.