Two weeks into the Premier League season and Tottenham Hotspur’s playing their home games at Wembley Stadium is already a major talking point. Having lost there to Chelsea on Sunday, there exists a growing concern that the temporary change of grounds could halt their progress.

Spurs have improved each year since Mauricio Pochettino took charge, moving up from fifth to third to second. Over the space of three seasons under the Argentine’s auspices, they have gone from top six contenders to serious title challengers.

However, their poor recent Wembley record – they have now won just one of seven matches at the stadium during Pochettino’s reign – is seen as something that could set the club back in their hunt for major silverware.

Playing in a different ground can cause discomfort, as players get used to a different pitch and atmosphere. It may indeed eat away at individual performance levels. But it cannot be an excuse for every single home defeat, and it wasn’t the reason behind Tottenham’s 2-1 loss to Chelsea.

Rather, Antonio Conte’s reigning champions, wounded after a shock opening day defeat to Burnley, came prepared. They were ready to stifle and counter, and Spurs struggled to find an answer to their opposition’s tactics.

After an underwhelming start last season, Chelsea switched to a 3-4-2-1 system. In the new shape, they found exceptional form and ran away with the league title. It seemed their success was wedded to the formation, so many were surprised to see them line up differently against Tottenham on Sunday.

Without the outstanding dribbling capabilities of Eden Hazard and Pedro – the former was out; the latter only made the substitutes’ bench – the champions lacked two of their most gifted attacking players. They were also unable to call upon Gary Cahill and Cesc Fabregas following their red cards against Burnley.

Conte considered all of this and made the decision to shift from 3-4-2-1 to 3-5-2, which is something we at Football Whispers urged Chelsea to look into in this recent post. David Luiz stepped forward into a holding role alongside N’Golo Kanté and Tiémoué Bakayoko in a midfield three, while Willian operated just behind Álvaro Morata up front.

Tottenham also went for something slightly unusual, veering away from their Plan A 4-2-3-1 and their Plan B 3-4-2-1. Instead, Pochettino lined his charges up in a rough 4-3-2-1 shape, with Eric Dier, Victor Wanyama and Mousa Dembélé in central midfield, and with Christian Eriksen and Dele Alli behind Harry Kane. 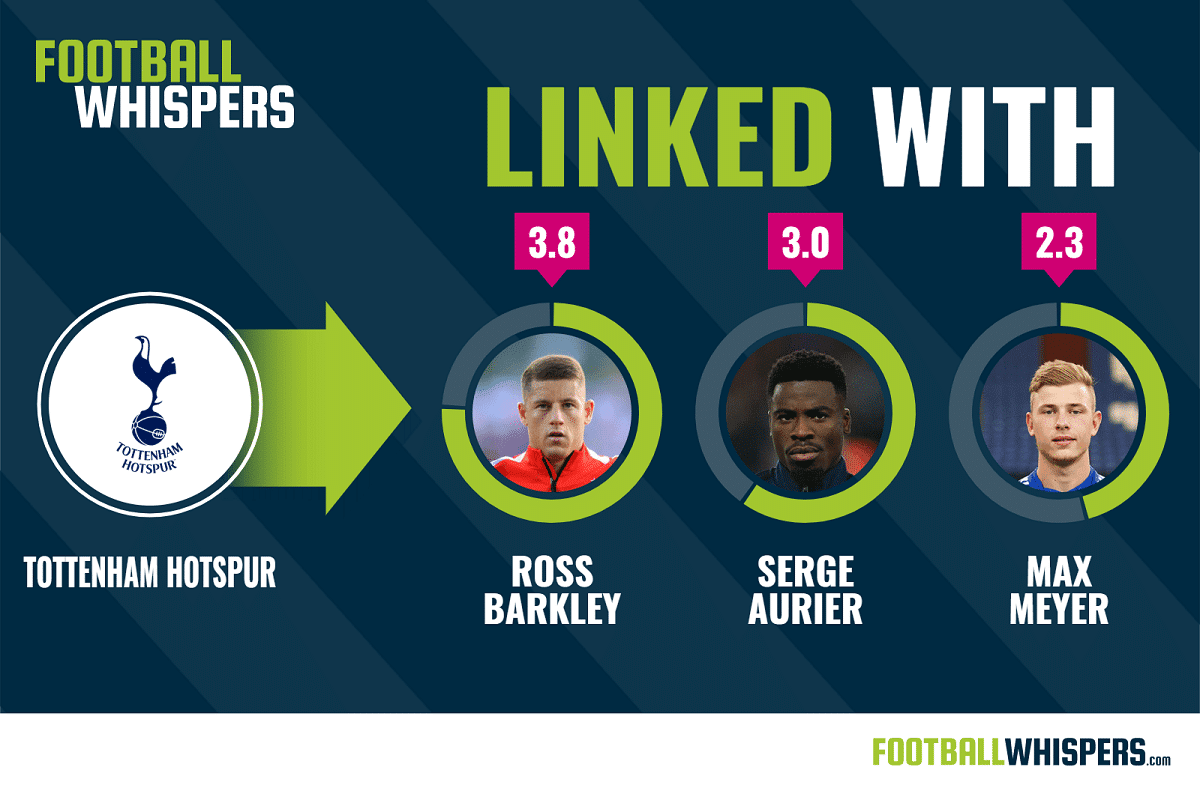 Analysing the match for BBC Sport, Ruud Gullit highlighted the difficulties Tottenham faced against a packed central midfield, writing: “Every time…Alli tried to go into those areas in the hole just behind striker…Luiz was almost always there. And if he wasn't, then Kanté was there. Or Bakayoko was there. Chelsea changed to a three to keep the middle solid and not let anything through.”

Conte’s decision to bring in an extra central midfielder was certainly indicative of an overall strategy to gain numerical superiority in the centre of the pitch. With three centre-backs, three central midfielders and the two forwards dropping deep, they were often able to create two-versus-one situations on Tottenham’s midfielders.

Of course, simply adding numbers isn’t the way to prevent a team of Tottenham’s attacking quality from scoring. Chelsea were also extremely disciplined in a positional sense, retaining their shape well. They also sat deep and remained compact, allowing little space in behind or between the lines. An example of this is seen in the below still, taken from the second half of the match. 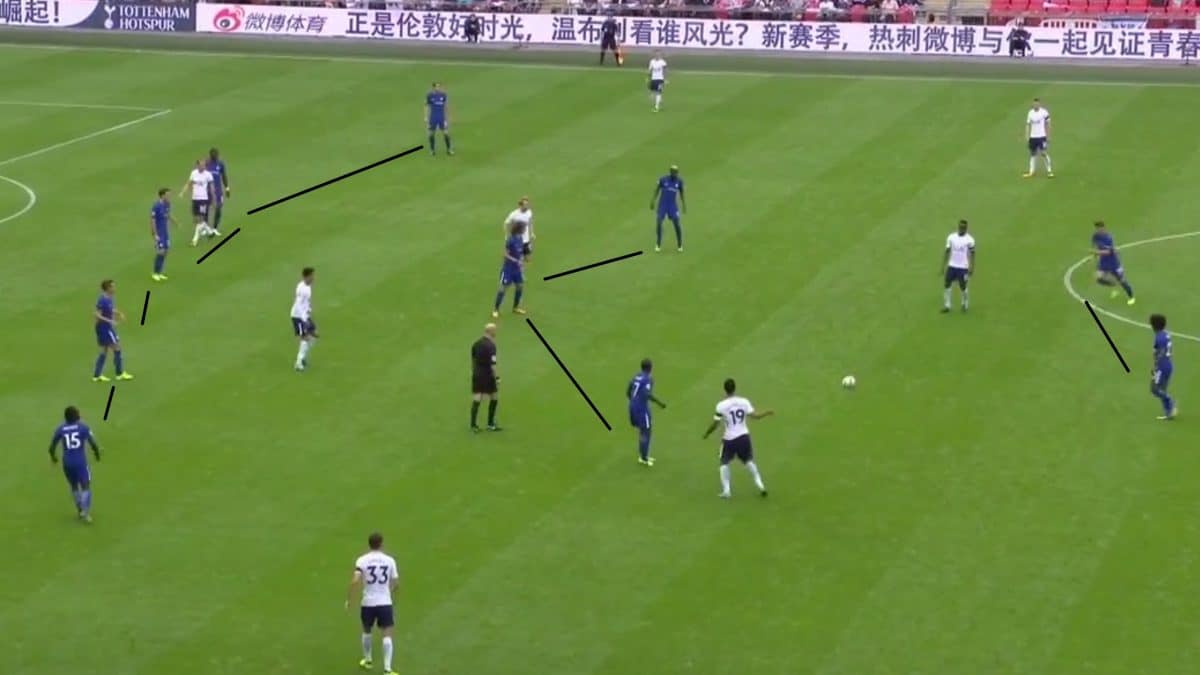 This combination of numerical superiority within a compact and well-organised shape, often forced Spurs into ineffective sideways passing. Pochettino’s side were thus unable to find gaps for penetrative forward passes into the feet of Eriksen and Alli.

As a consequence of this, the two attacking midfielders often drifted into wider areas in order to get on the ball. This, however, suited Chelsea, as it moved Tottenham’s key creative influences into less dangerous positions.

The below still, taken from the first half, shows Eriksen moving to the right wing in order to create a passing lane for Dier to find him. Alli, meanwhile, is situated on the opposite wing. Kanté, Luiz and Bakayoko separate them, and Kane is isolated up front. 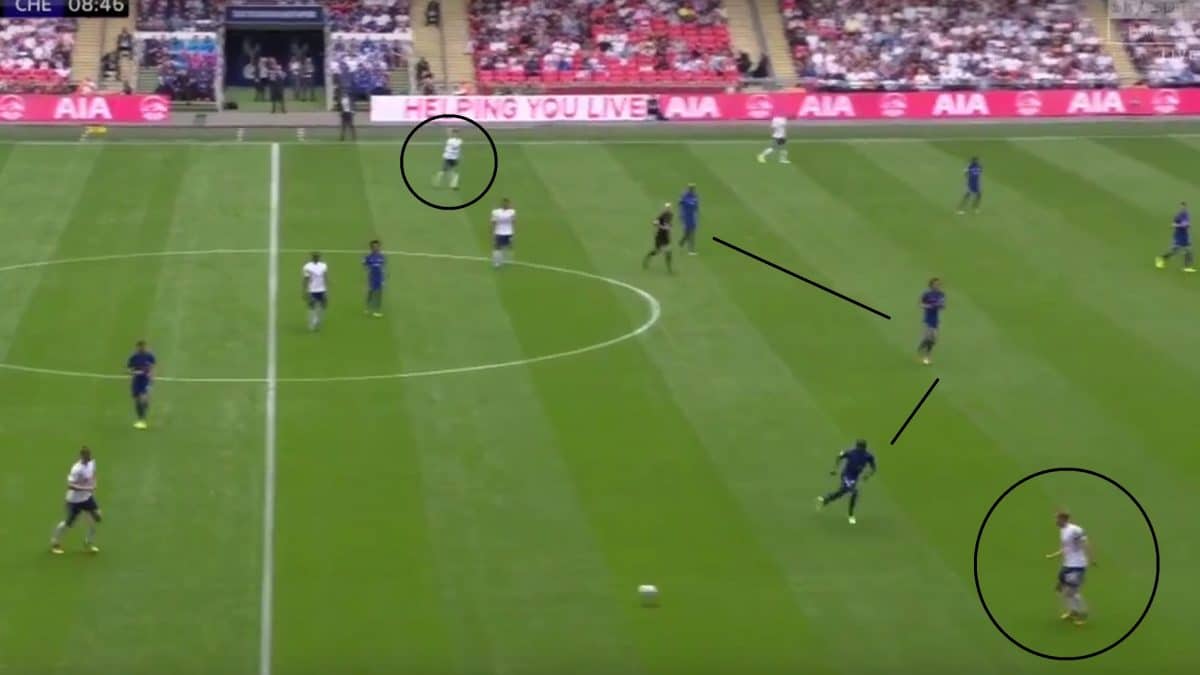 Tottenham’s possession was ineffective as it didn’t force Chelsea out of their shape. Rather, Conte’s men could simply collectively shift slightly from right to left depending on the direction of the pass, keeping their deep defensive structure intact.

With this in mind, it wasn’t surprising that Spurs attempted 38 crosses, only seven of which were accurate, while failing to complete one single through ball.

Too often, Spurs’ passing took place in front of the champions. This was partly due to the profile of player Pochettino opted for in his midfield. Two of his three, Dier and Wanyama, are more effective ball-winners than ball-players. The other, Dembélé, prefers to drive through pressure with dribbles than play through it with passes.

In possession, Tottenham’s 4-3-2-1 became more of a 2-3-4-1, with the midfield trio combining with Toby Alderweireld and Jan Vertonghen in build-up. But this build-up was stagnant, leading to the below situation. 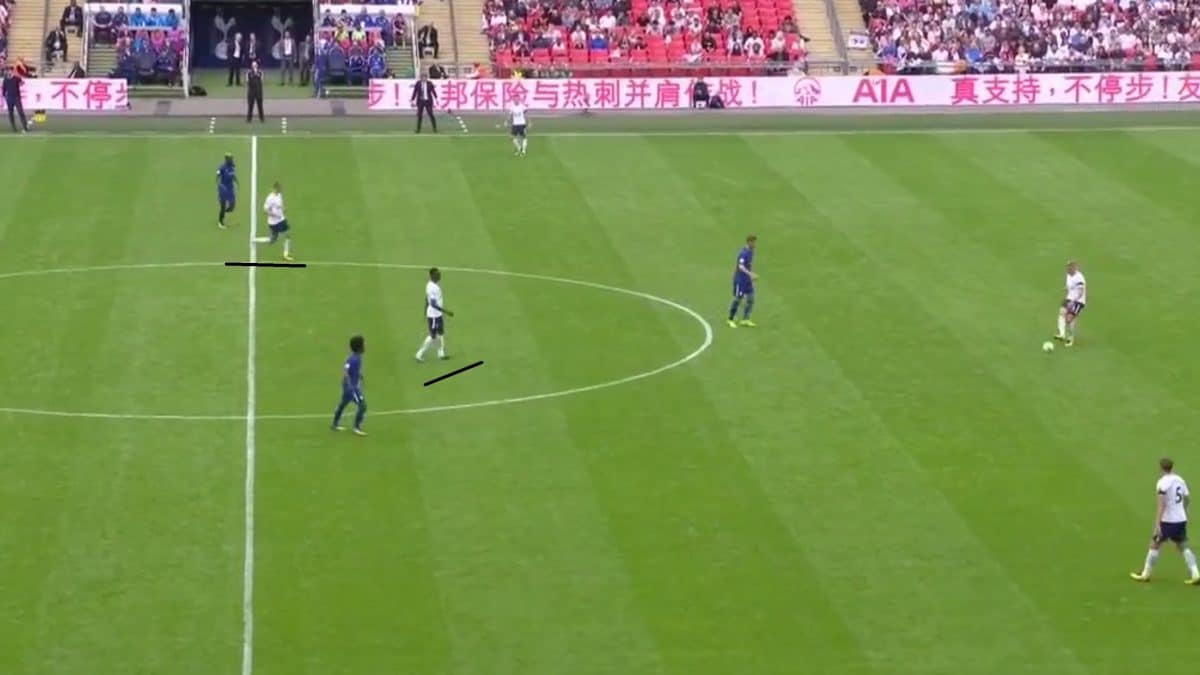 There was no real need for having so many players operate in front of a deep Chelsea defence, and Pochettino took far too long to change his system. It took 43 minutes after going 1-0 down for the Argentine to replace Dier with Son Heung-min, taking off a defensive midfielder for an attacker.

Perhaps there was an assumption that Conte’s side would crack eventually, though such an assumption can only have been made without the evidence of Italian national team of Euro 2016, a team managed by Conte that played with a similar defensive fortitude.

Pochettino should have been more proactive in introducing more players to operate behind Chelsea’s midfield line, though perhaps this wouldn’t have been quite so big an issue if he had genuinely dangerous width to call upon. Without Kyle Walker – sold to Manchester City – and Danny Rose – subject of transfer speculation – they lacked serious attacking threats on both flanks.

Kieran Trippier and Ben Davies were tasked with taking up high positions down the wings with the idea being that this would allow Eriksen and Alli to move infield and stretch Chelsea’s defence, creating space centrally. But neither full-back has the attacking quality to achieve this.

This can be backed up by last season’s statistics.

In Premier League action, Walker completed 1.1 dribbles per game on average. Trippier, by comparison, didn’t complete one single dribble. And on the left, Rose averaged 1.4 completed dribbles compared to Davies’ 0.3.

Tottenham’s full-backs did not provide the sort of one-on-one quality necessary to worry Chelsea, meaning they could comfortably pack the centre without concern over leaving their own wing-backs isolated against talented dribblers.

The struggle to penetrate their rivals centrally through passes or stretch them with positive wing play meant Spurs often looked to Dembélé to provide some sort of incision with dribbles from deep. This is shown by the fact the Belgian, whose strength and technique make him remarkably resistant to pressure, completed more dribbles (four) than any of his team-mates on the day.

Against Chelsea, the stadium wasn’t the problem. Ultimately it was the team’s lack of one-on-one specialists and attacking potency out wide, as well as Pochettino’s unwillingness or inability to adjust tactics – both after going 1-0 down and after finding the equaliser – that that led to defeat.

If Spurs can address the above issues, on the training ground or in the transfer market, then Wembley can be their friend.