As domestic football momentarily paused for the November international break RBL sat proudly at the top of the Bundesliga on level points with German giants Bayern Munich after 10 matches. Since their promotion to Germany’s top flight they’re undefeated winning seven and drawing the other three. They’ve beaten Borussia Dortmund and Wolfsburg as well as picking up a point against Champions League side Gladbach. This isn’t a team that’s come up a division and is looking to consolidate. They’ve got eyes on European football and they’re playing their way into contention. Only Bayern Munich and Borussia Dortmund have scored more goals and only the former has conceded fewer goals than Leipzig so far this season.

It’s caught plenty of people off guard. RBL finished as runners up in the Bundesliga 2 last season scoring just the 54 goals in 34 matches. It appears the signings of Timo Werner from Stuttgart, Oliver Burke from Nottingham Forest and Naby Keita from Red Bull Salzburg have really bulked up their attack and all three are already off the mark for their new club.

People may claim they’ve bought their success but as plenty of clubs have shown in the past it’s all well and good signing these expensive players but you need to be able to put them in a system which suits their traits and strengths. RBL didn’t have a scatter gun recruitment policy. They didn’t just sign an abundance of talented youngsters in the hope they all developed as expected. They had a system in mind and signed players who could execute their game plan. They acquired players with bundles of energy and electric pace. 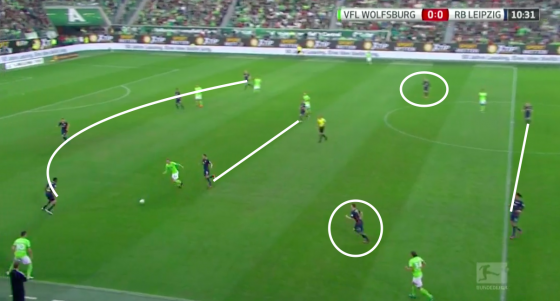 Formations are nothing more than a starting off point these days. With so many teams being so flexible and fluid their ‘formation’ often changes numerous times throughout the 90 minutes. RBL’s system when they’re looking to build from the back shapes up like a 4222 system (as shown in the image above). They like to keep their two forwards high up the pitch but stagger the wide midfielders and the centre midfielders so that they’re not isolated and they’re set up to be able to counter-attack teams. 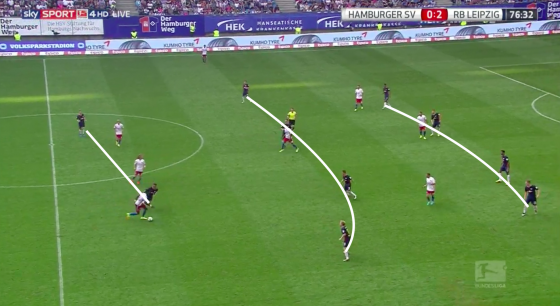 When out of possession RBL switch to a traditional looking narrow 442 shape (as shown in the picture above). Their wide players drop in line with their centre-midfielders and they tuck in. They invite the opposition to go wide by clogging up the central areas. The attackers, usually Poulsen and Werner, press the opposition’s centre-backs for two reasons 1) to potentially steal the ball and start a counter attack or 2) to make them play the ball long knowing they have plenty of players in central areas to deal with the lofted balls. 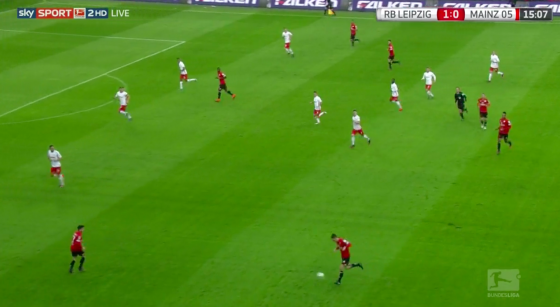 When the opposition take up the offer to attack the wide areas the full-backs push out to engage, the centre-back covers the full-back area and one of the defensive midfielders drops to cover the centre-back. In the above image you can see RBL transitioning into this set-up with Diego Demme getting back to cover Orban pushing over to the right hand side.

It’s a similar shape to the one Diego Simeone uses with Atleti. It’s a bit more dynamic than your usual 442 system and helps the team overload certain areas of the pitch in certain situations. At times when the opposition are pressing centrally the two RBL strikers will split and they will be able to double up in the channels with one striker and one attacking midfielder on either side. So in essence it’s 4 attackers against 4 defenders. It’s a tactic that lends itself to great counter-attacking football. 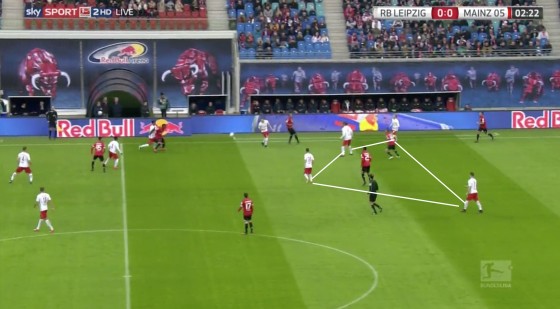 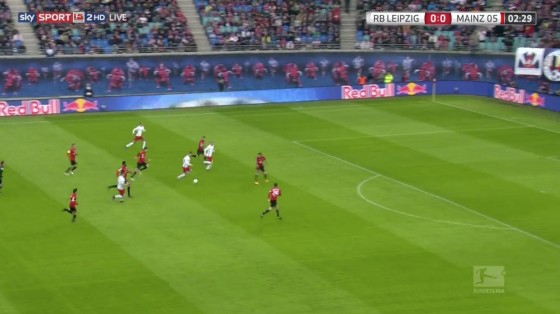 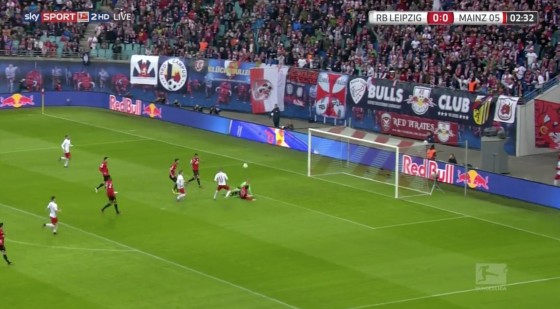 In the first picture the four RBL attackers have lines drawn to link them up. They’re narrow, close together and it’s clear their attacking outlet down the right is the right-back. In the second picture RBL have worked the ball beyond the Mainz defence and it’s now their 4 attackers breaking against just the 4 Mainz defenders. They work the ball between them and in the final picture Timo Werner is dinking it over the ‘keeper. It’s because they had the four attackers close together that they were able to break at great speed. 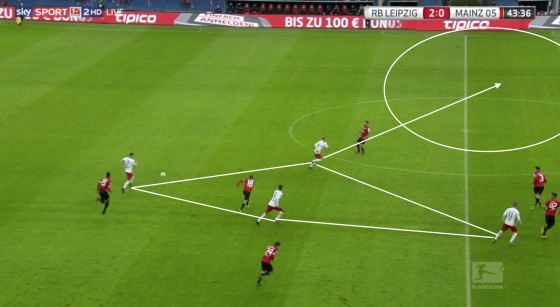 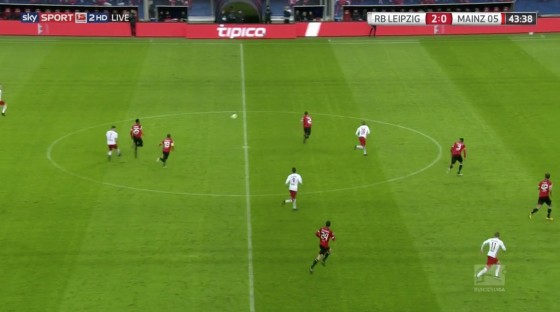 RBL are one of the few teams brave enough to leave three men forward when defending a set-piece but against Mainz their risk paid off. Sabitzer, the man in possession, is one of the attacking midfielders but he dropped a little to defend the corner. The first screenshot was taken after he’d carried the ball forward. Once again though the four attackers are in a diamond shape. Werner, the man to the right of the screen, is the tip, Forsberg the left of the diamond and Poulsen on the right. As Sabitzer drives forward Werner pulls to the right taking defenders with him. Poulsen drives centrally and Forsberg attacks the space behind the right back, highlighted with a circle.

The ball gets played into the space and both central players who were marking Werner have to scuttle across because Forsberg has an abundance of pace and the Mainz man closest to him isn't getting there. Forsberg checks back into the box and Werner is the beneficiary once again to tap the ball home. As soon as they get the ball to one of those four attackers it’s a blitz and team’s can’t cope. 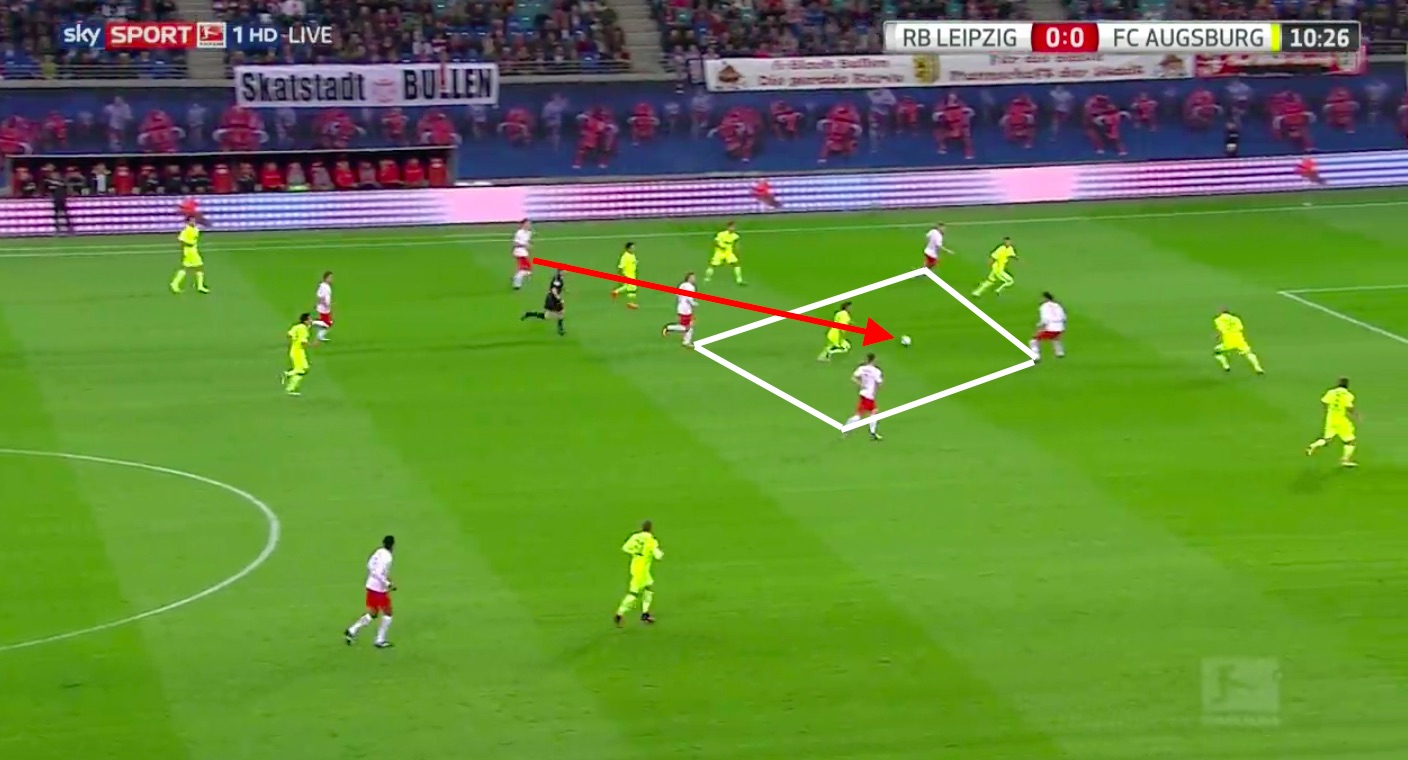 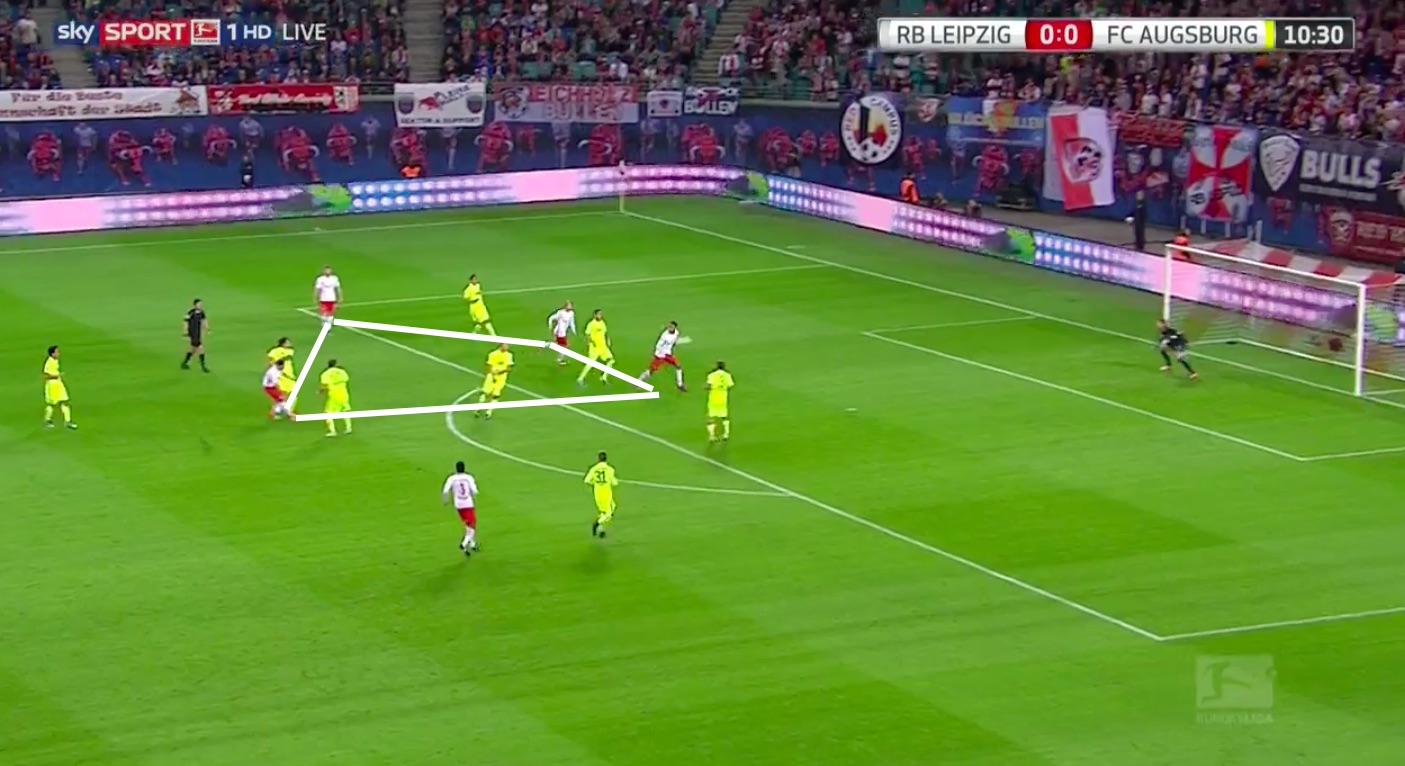 Again it’s those four positions. It means no matter which of the attackers the ball ends up with there is always a passing option and always a way to progress the attack. It’s almost like an el rondo training exercise for the attackers, just playing the ball around the unfortunate opposing player who finds himself in the middle.

In the above scenario the ball is played to Poulsen who then knocks it back to Sabitzer and the other three in the attack all make moves forward. When Sabitzer makes the pass in the second screenshot all three players ahead of him have intelligently worked space for themselves between the defenders. In this instance the ball falls to Forsberg who strokes it home. 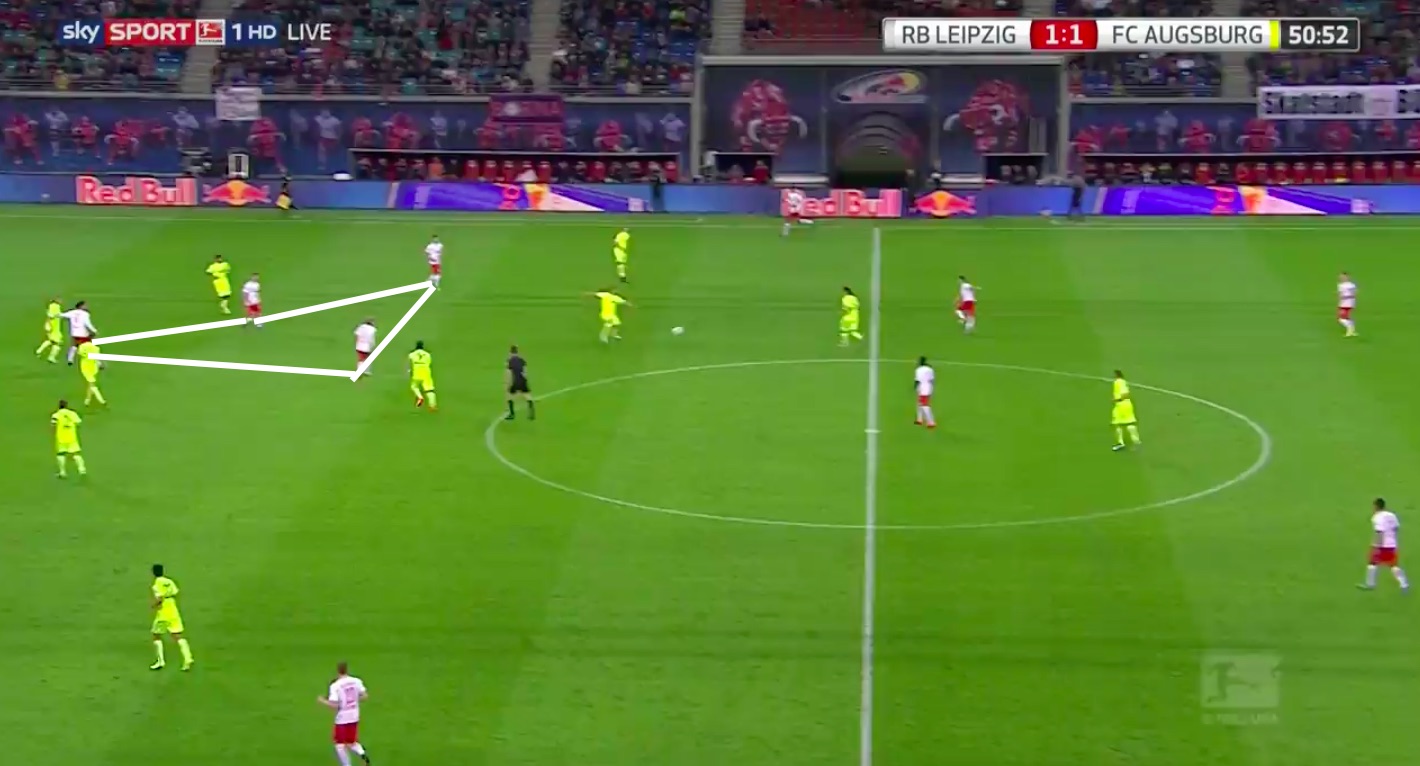 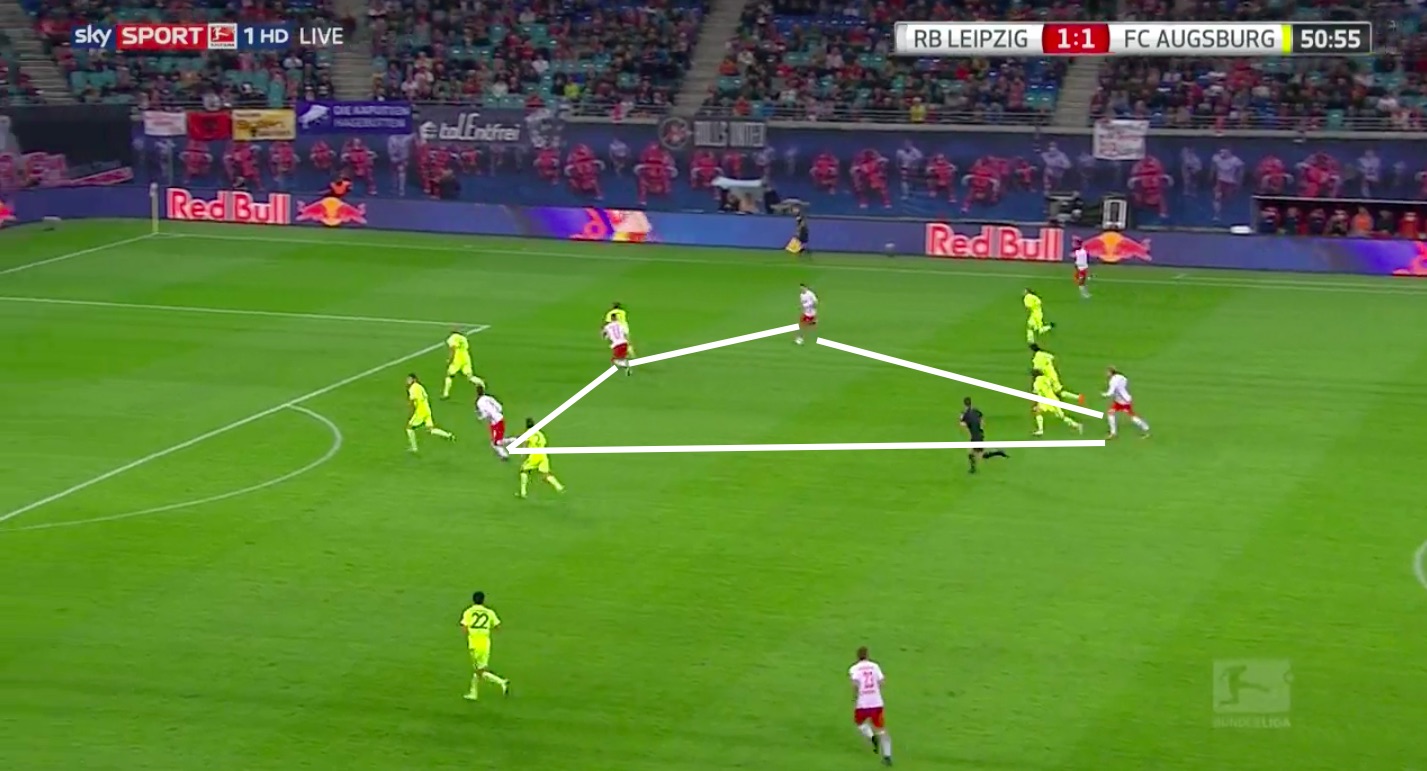 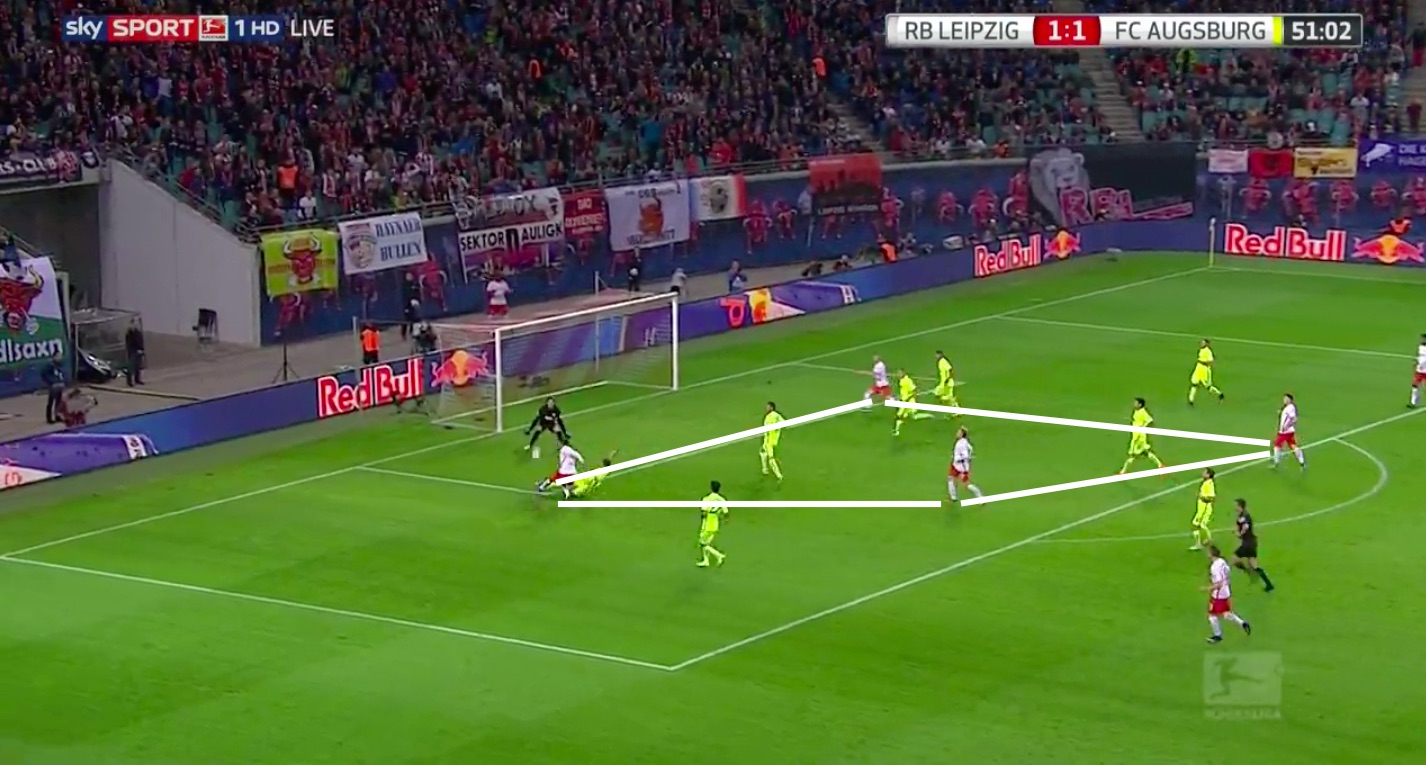 In this instance the one of the Leipzig midfielders plays a pass that takes the Augsburg midfield out of the equation. He threads the ball through to the RBL attacking quartet. The ball ends up at the feet of Forsberg and as the opposition goes to close him down he plays it to the right. In the second screenshot you’ll see the man in possession is in quite a bit of space and it’s effectively 3 v 3. As the attack progresses and Poulsen ends up firing the ball home (shown in the third screenshot) the other three Musketeers are in the box supporting the play.

It’s hard to keep them quiet because they aren’t dependant on just the one to instigate attacks. Unless the opposition find a way to keep all four attacking players under wraps then it’s not going to be an easy day for an opposing team facing RBL. Even if they did manage to they still have to deal with Naby Keita breaking from deep which is by no means an easy task. There are attacking threats throughout the team and it’s just a blur of perpetual movement which can’t be tracked. This, along with their defensive solidity, means they have every chance of finishing in a Champions League place this season. Their clash against Bayern Munich is their final match before the winter break on the 21st December. Make sure you mark it on your calendar, it’s not to be missed.