Liverpool moved a step closer towards Champions League qualification with a 3-0 win over Maribor at Anfield. The result was secured thanks to second half goals from Mohamed Salah, Emre Can and Daniel Sturridge.

The win and three points means Jürgen Klopp’s men remain top of Group E, one point ahead of Sevilla and three clear of Spartak Moscow. However, the Reds were far from convincing for long periods.

In the first half, Liverpool toiled as they attempted to break down a well-organised Slovenian defence. Maribor made things tough for their hosts, and a potential upset draw appeared temporarily on the cards.

But, thanks mainly to the sheer attacking firepower and quality advantages all over the pitch, the Premier League side were able to break through early in the second half. Salah found the net on 49 minutes, before a nice move led to a second 15 minutes later.

The result was guaranteed in stoppage time, with Sturridge coming off the substitutes’ bench to wrap up the points and leave Klopp smiling.

Here, Football Whispers breaks down the main tactical talking points of the match.

After conceding seven against Liverpool last time out, Maribor made a clear attempt to stifle their opposition in the Anfield return on Wednesday night. They set up in a compact 5-4-1 shape defensively, allowing very little space to appear in the channels or between the lines.

Their lone striker, Jasmin Mešanović, dropped very deep without possession to support his team-mates, with most of the Slovenian side’s players appearing in their own half. An example of their shape is seen below. 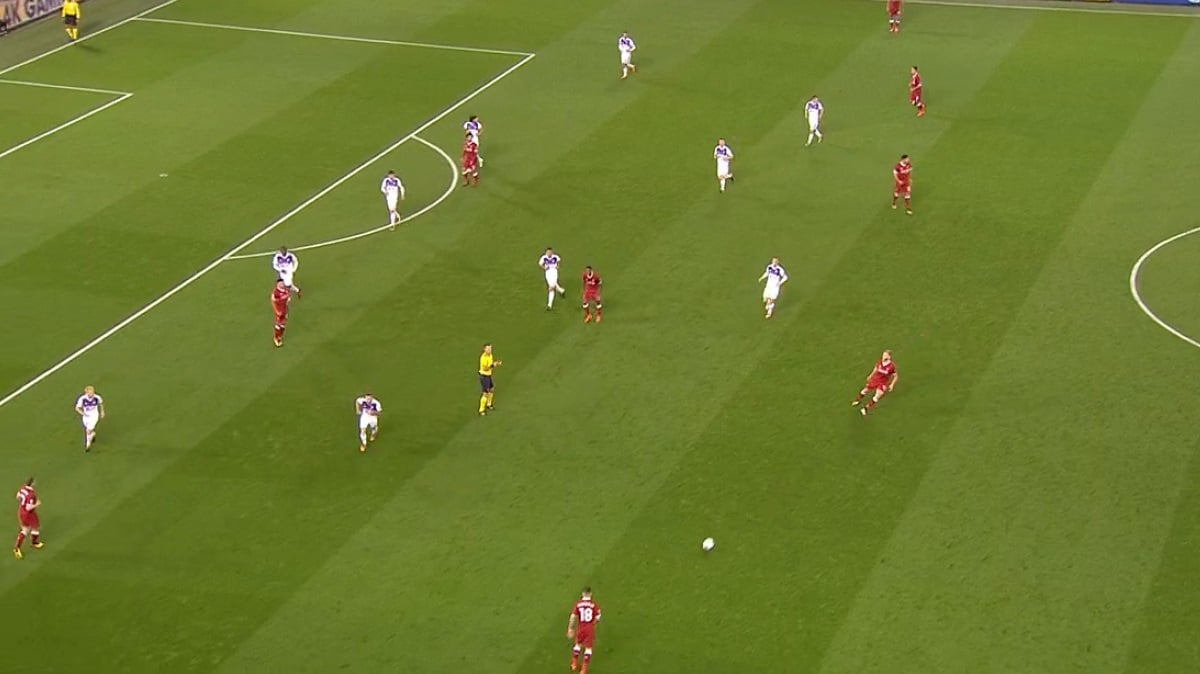 Setting up in a deep block, Maribor denied Liverpool space in behind. They also reduced the possibility of central gaps appearing through sheer number of players occupying these spaces. They moved as a unit, only occasionally pressing man-to-man when the ball went wide or an individual opponent was in their midfield zone.

This worked in the first half, as the home side could only muster two shots on target for all their possession.

Klopp has often argued that counter-pressing – pressing in the defensive transition phase, immediately after the ball has been lost – is the best form of attack. However, this aspect of his philosophy has been decreasingly prevalent in recent times.

Liverpool used this tactical scheme early in the first half, but after that there was a distinct lack of counter-pressing. This wasn’t down to a lack of effort, but because of an unwillingness to play dangerous balls.

According to WhoScored, the Reds played just two through balls in the whole match. This statistic reflects a side scared of taking risks with possession. Thus, rather than play vertical balls through Maribor’s defensive block, they shifted the ball from side to side without really threatening.

Had they attempted more penetrative passes through a packed centre, they would undoubtedly have given the ball away. But they would have done so in dangerous advanced central areas, and that would have been the ideal conditions for counter-pressing.

While they defended resolutely throughout the first half and tried doggedly in the second, Maribor lacked punch in attacking transition.

They often secured the ball well having turned over possession, playing out with some nice combinations.

Once beyond the halfway line, they didn’t have the pace or movement to trouble Liverpool.

Trent Alexander-Arnold and Alberto Moreno started at full-back for the hosts, and both were able to get back and help recover possession after their team-mates had given it away.

Maribor just didn’t have the athleticism or individual skill to make something happen in the middle or final thirds.

On 74 minutes, Sturridge came off the bench. About a quarter of an hour later, he found the back of the net with a clinical finish from close range. He had one shot during his time on the pitch. That shot went in.

The England international's no-nonsense approach in front of goal was a pleasant sight for Liverpool fans who had watched their side labour to victory. While not renowned as a poacher, he was on hand to score in the dying embers and state his case for more frequent game time in future.

Klopp has preferred Roberto Firmino to lead his front three, and Salah looks to have locked down the right wing berth already after his summer move. However, Sturridge showed once again here that he has the quality and composure to offer extra precision in the final third.