This Sunday’s Old Firm derby could be a Scottish Premiership title decider. Celtic are ten points ahead of Rangers, meaning a win would leave them 13 points clear with just 21 left on the table for both teams.

However, a defeat for the reigning champions would narrow the gap to seven points with seven games to go, one of which would be another derby. Either way, it’s likely that the top of the table will look very different come next week.

Since taking over, temporarily, from the departed Brendan Rodgers, Neil Lennon has overseen four tough games. Away victories in league and cup action over Heart of Midlothian and Hibernian respectively were followed up by a disappointing 0-0 draw at home to Aberdeen and a turgid 1-0 win away to relegation-threatened Dundee.

Without their creative nexus of Ryan Christie and Tom Rogic, Celtic have not looked at their best. This issue could be emphasised further against Rangers, who have a tendency to press high and aggressively.

In order to get a key win, or at least avoid a panic-inducing defeat, Lennon must get his tactics right. Here we break down how Celtic should approach this Sunday’s big match.

Move to a back three

In the first Old Firm derby of this season, Celtic lined up in a fluid 4-2-3-1 that became a 3-4-2-1 in possession. James Forrest and Kieran Tierney hugged the touchlines, while Mikael Lustig tucked into a back three. Callum McGregor and Rogic roamed between Rangers’ midfield and defence lines, forming a box shape with central midfielders Scott Brown and Olivier Ntcham.

Celtic were dominant on the day, winning 1-0 after a game in which their rivals struggled to hold onto the ball or even muster a clear-cut scoring chance. However, the derby at Ibrox at the end of December was a different story.

Rangers completely controlled the return in their own stadium, applying pressure high and denying their ball-loving opposition the quantity of possession they crave to seal a 1-0 win of their own.

It’s worth noting that, in the second game, Rodgers went with a back four and a classic 4-3-3 setup. And, with one No.6 instead of a double pivot, a two-man back line instead of a three-man line, and fewer players operating between Rangers’ defence and midfield, Celtic struggled to play out and through the thirds.

Lennon would be wise to learn from these games and move away from the 4-2-3-1 system he has favoured since returning to Parkhead and temporarily install a 3-4-2-1 attacking shape for this weekend.

Having three men instead of two in the first line of attack would give them more options to play around the pressure of Alfredo Morelos, while the wing-backs could help to force Rangers’ wingers back and give space to Celtic’s outside centre-backs.

With more time on the ball and more options to play short, Lennon’s side could establish possession from the back more comfortably than they were able to at Ibrox, meaning fewer aimless long balls, unnecessary giveaways and dangerous opposition counter-attacks. 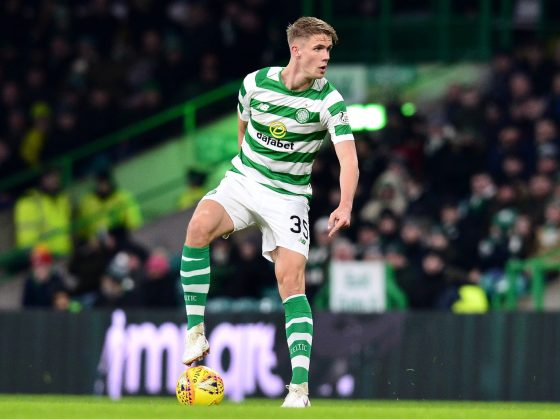 If Celtic are able to establish more controlled possession and force Rangers to defend deeper this weekend, they are going to need players who are adept in progressing the ball from the back in various different ways.

With this in mind, Kristoffer Ajer simply must start.

The Norwegian has not always convinced, but there is no doubt he is the most forward-thinking, positive ball-player in Celtic’s defence.

Compared to his positional teammates, Dedryck Boyata, Filip Benkovic and Jozo Simunovic, he averages more dribbles and progressive runs per 90 minutes, while he also completes a higher percentage of his passes to the final third.

Against a slightly lower defensive block, Ajer’s willingness to drive forward with the ball at feet to try and commit opponents and manipulate their shape is vital.

McGregor played reasonably well when re-deployed as a No.6 in the absence of Brown at the heart of Celtic’s midfield. However, now that the club captain is back, there is no need for the playmaker to be utilised so deep.

The injury crisis Lennon has had to deal with is easing up. Olivier Ntcham may be back soon, though even if he can’t make the derby Nir Bitton can partner Brown in the centre. That would free McGregor up to play in a higher role, perhaps in and around the left inside channel where he has caused so much damage in the past.

One of the best qualities the 25-year-old brings onto the pitch is his movement off the ball. He is happy to hold his position even when initially blocked off to eventually receive between the lines, and his ability to find space on the blind side of opponents is exceptional.

Having him unnecessarily play in front of a defensive block is unforgiveable tactical negligence as it takes away arguably his finest traits.

With McGregor operating in a more advanced role than he has enjoyed for club and country recently, Celtic will have a linkman capable of connecting play and progressing attacks.

This could cause a decisional crisis for Rangers, who will have to choose between going deep and closing off his space or continuing to press and allowing space for him to exploit.

Don't be afraid of directness

Celtic under Rodgers were almost absolutely against unforced long balls. However, there were times when these types of pass could have been a good option. Lennon may want to re-think this approach slightly for the upcoming derby.

Rangers like their full-backs to go aggressively man-to-man against their opposite wingers. So if any Celtic players wander into this territory, they are going to be marked and given no time or space to receive and turn.

This could open up an opportunity, however, for striker Odsonne Edouard.

With the opposition full-backs closing down their men, space may open up behind them, or in the channels between them and the centre-backs, for the Frenchman to run into and receive balls over the top or through.

Ultimately, if Celtic can establish possession and play through the thirds this more direct option may not be needed. Rather, they can win the way they prefer to, and end the title race as a consequence.