Both Everton and Liverpool head into Monday’s Merseyside derby on the back of impressive wins. On Tuesday night, Everton managed to turn around a 1-0 scoreline at Goodison Park to give Arsenal their first defeat in the league since the opening day. Then, Liverpool faced a resilient Middlesbrough at the Riverside on Wednesday and came away with three points to put an end to their two game winless streak, handing ‘Boro their heaviest defeat of the season in the process.

Both teams have their tails up going into the fixture. For fans of both clubs the festive period won’t properly kick-off until this match is out of the way. 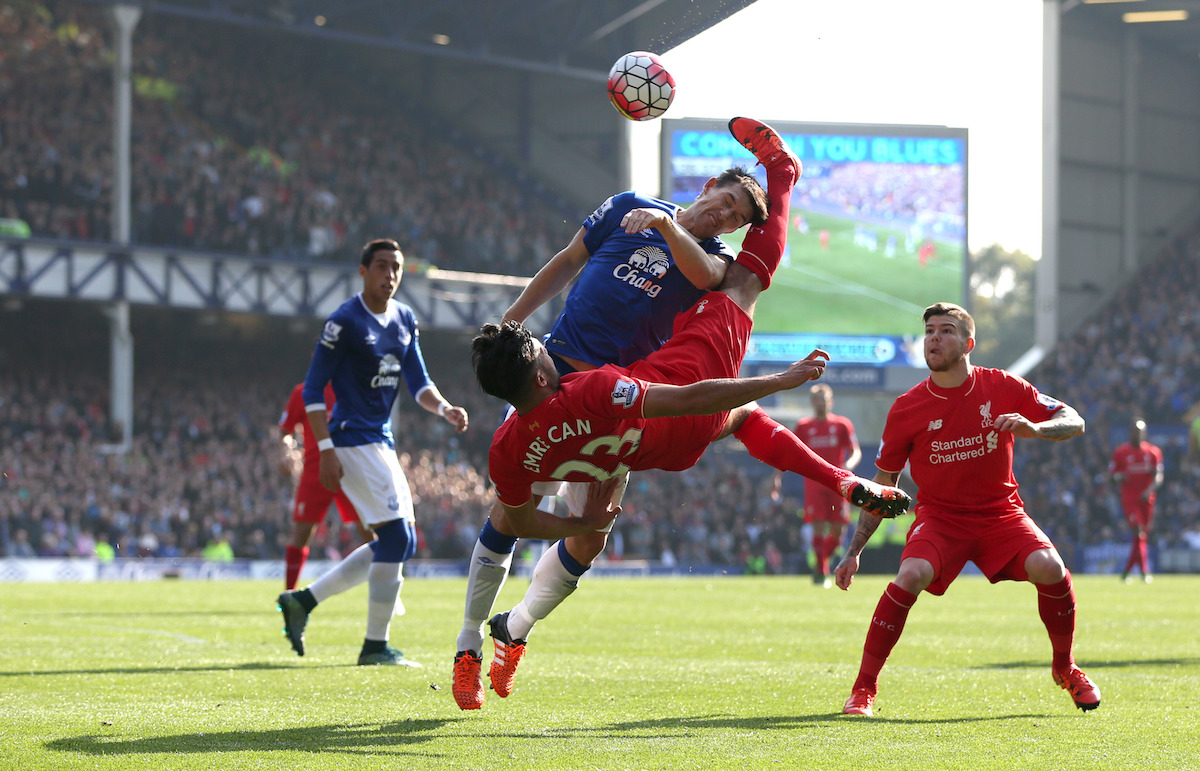 The red half of Merseyside go into the game with bragging rights after watching their team win the last derby 4-0. Everton are looking for their first derby win since 2011 and with Koeman in charge they have every chance of doing so. The Dutchman masterminded a memorable 3-2 for Southampton against Jurgen Klopp’s last season. Everton go into the match knowing if they hope to have any chance of winning they have to stop Liverpool from scoring. It’s no easy feat with Liverpool leading the way in the league for goals scored (40), almost double what Everton have scored (21).

When looking at key battles ahead of the game, the easy one would be to suggest something like Enner Valencia or Kevin Mirallas against James Milner. The Liverpool full-back has been dribbled past more than anybody else in the league this season and quick wide players seem to give him trouble.

Then there’s the intrigue surrounding Leighton Baines and Sadio Mane. Can the Everton left-back nullify Liverpool’s top goalscorer? Or how about Romelu Lukaku against Dejan Lovren. The Croatian struggled against Bournemouth when Benik Afobe came on as a substitute and has a history of failing to deal with big powerful forwards. There are key matchups throughout but the keys areas in this fixture will be Adam Lallana up against Idrissa Gueye and Divock Origi and the Liverpool attacking trio against Ashley Williams.

Williams and his weaknesses.

The 32-year-old has been praised by media and fans alike ever since his £12 million move to Goodison Park in the summer. He netted the winner against Arsenal and he’s already turning into a bit of a cult hero. In a recent article from the Liverpool Echo, Everton fan Mark Nixon said he’d make Williams the captain for the derby with Jagielka suspended. It’s a bold shout given the defender is yet to find a middle ground when it comes to his performances in blue. He’s erratic one week and impressive the next. He has weaknesses that the Reds can exploit and he’s going to have to be switched on. 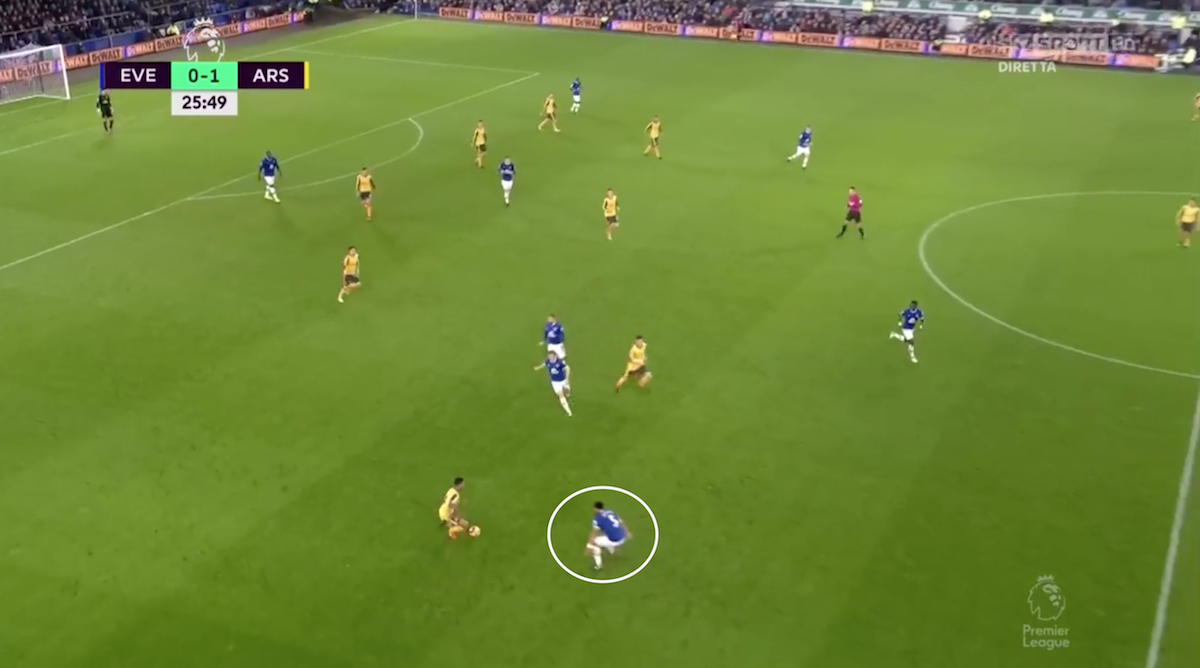 As you can see in the picture above, Williams likes to press from the back. It’s obviously an instruction from Koeman and while it can sometimes be effective to keep the opposition hemmed in their own half it’s also a negative in the sense that he is often being isolated with a lot of space left in behind. Defenders are occasionally good when 1-on-1 with players but more often than not, unless they’re an elite centre-back with a lot of pace, they only excel in small areas. In the picture Williams has pushed on to press Theo Walcott but isn’t quick enough to stop the Arsenal man from turning on the ball so he’s no longer facing his own goal. Immediately Williams is exposed and the winger knocks the ball past him before racing into the acres of space behind the centre-back. 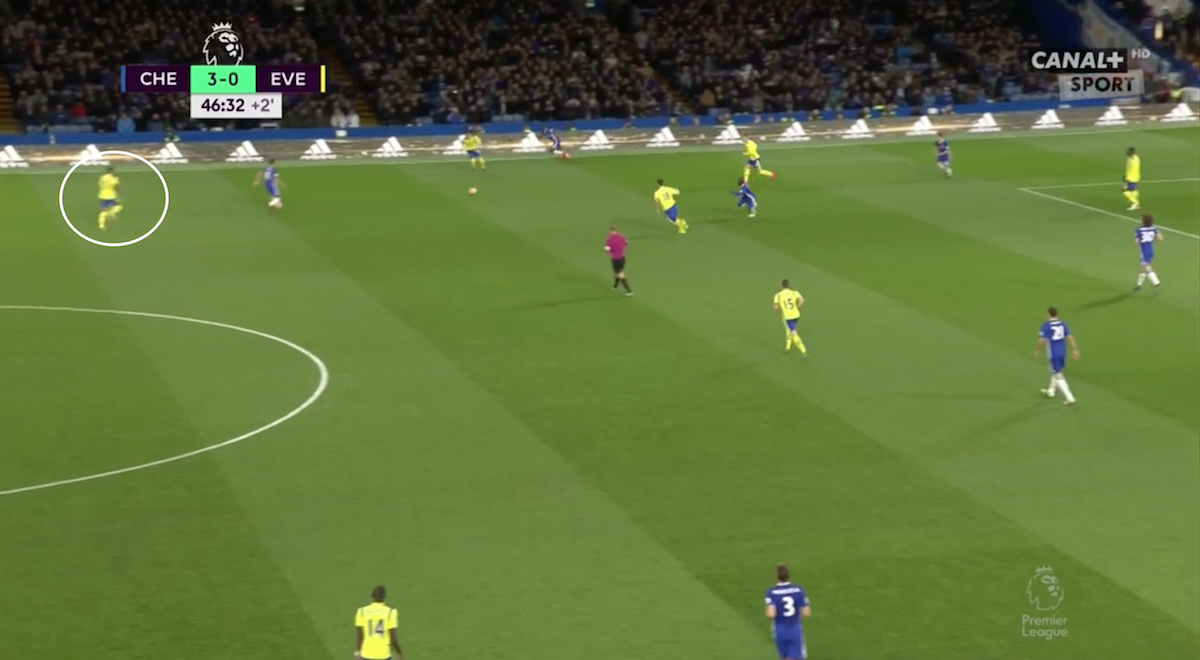 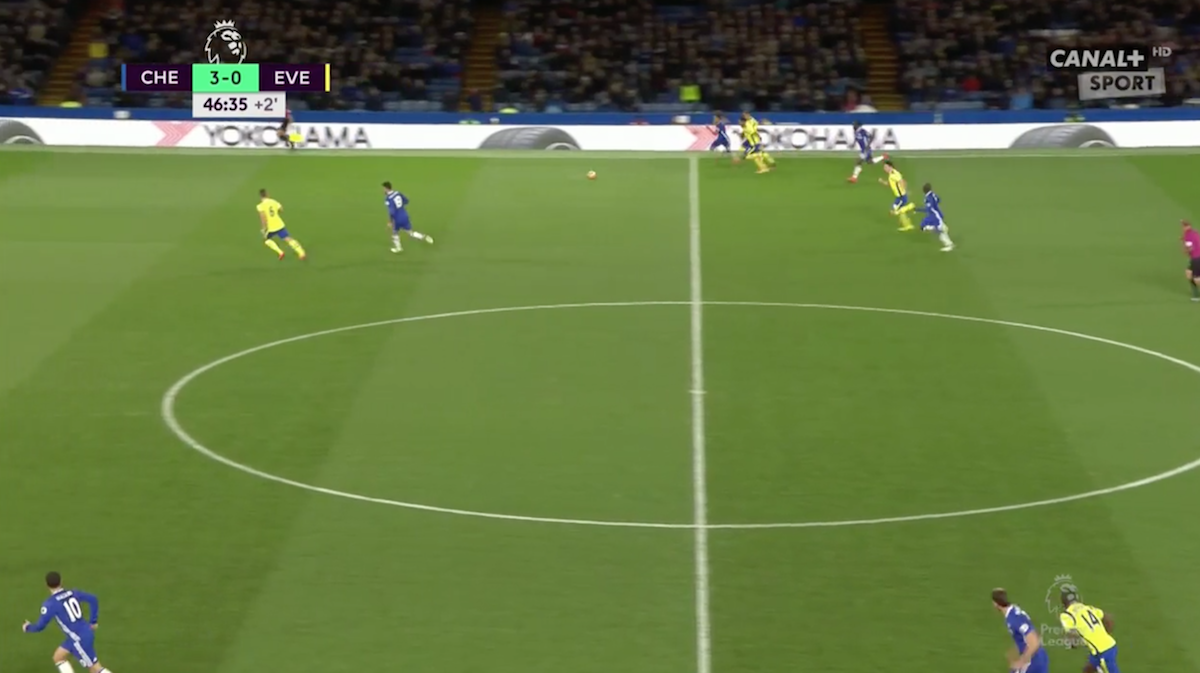 The pictures above are taken from Everton’s 5-0 defeat to Chelsea. Again you can see Williams push on in an attempt to force, Pedro, to play backwards. But again, Williams doesn’t get close enough to the former Barcelona man and it’s basically footballing suicide. Williams is caught in no man's land and the forward breezes past him with relative ease, driving into the vacant space. Pedro plays the ball to Diego Costa but in this instance the prolific forward only hits the side netting.

In their arsenal Liverpool have Divock Origi. He’s scored in five consecutive games and there have been a variety of finishes on show. He’s comfortable dropping deep to link with the midfield and to create space beyond him for the likes of Roberto Firmino, Emre Can Adam Lallana and Sadio Mane to exploit. He regularly runs the channels and playing with his back to goal isn’t a problem. He, as Mane, have explosive pace. If Williams looks to press the Belgian as high as he looked to press the likes of Pedro, Sanchez and Walcott, then Liverpool could have a lot of joy powering into that space behind him. 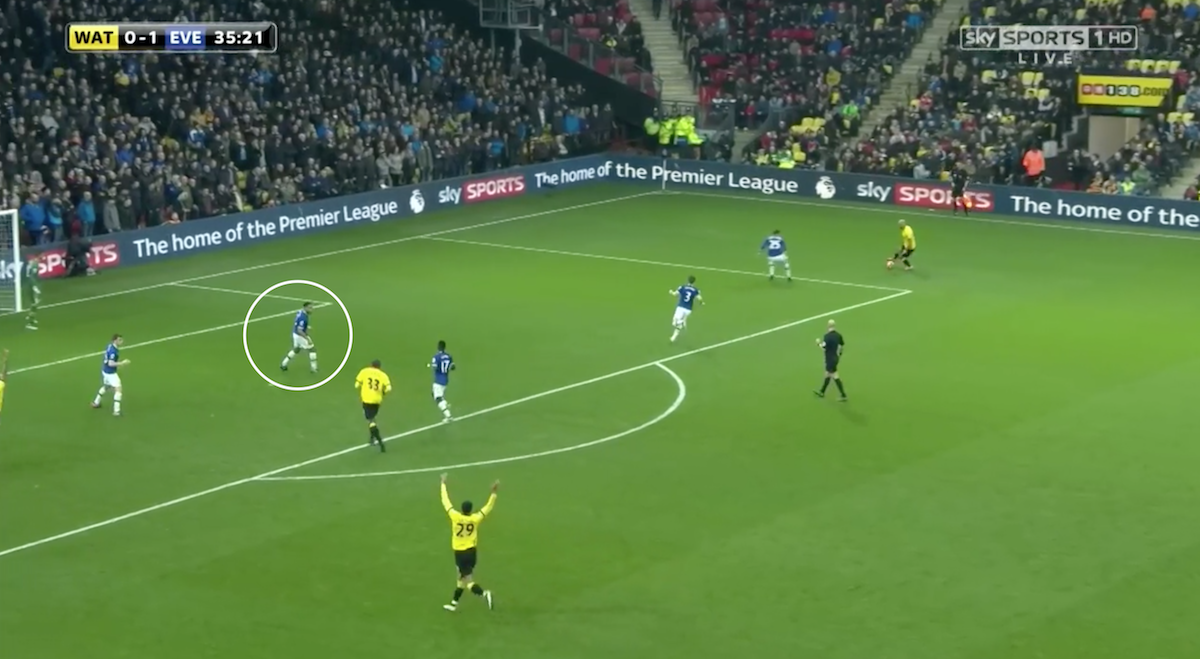 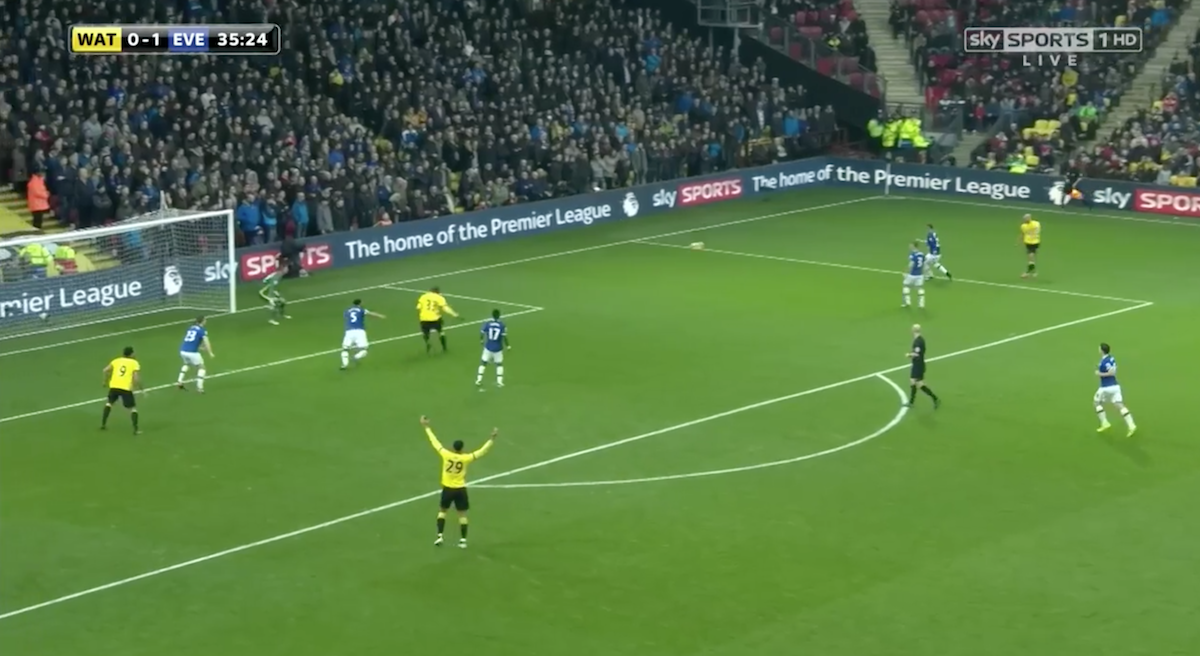 Another part of Williams’ game that Liverpool could look to exploit is how the defender is sometimes caught on his heels. In the pictures above, taken from the 3-2 defeat to Watford, you see Williams initially take up a good position. He’s circled in the first picture and you can see he’s had a look round to see who is where. Stefano Okaka darts from the middle of the goal and across Williams to the near post and finishes before the Everton man is able to get close.

Origi’s movement is one of his strengths and as he showed on Wednesday against ‘Boro his intelligence in the area, for someone so young, is impressive. He initially holds his run before accelerating in front of the ‘Boro man to tap the ball home from five yards out. If Williams is caught on his heels, Origi and the rest of the Liverpool attack will have no qualms in taking advantage.

Adam Lallana is having the season of his career. The 28-year old has 6 goals and 6 assists in 966 minutes of first-team football for Liverpool. He’s thriving in the slightly withdrawn role in which he’s afforded a lot of freedom to fill spaces all over the pitch. He’s also seeing more of the ball and his average attempted passes per 90 is up to 41.6, increased from his career average of 34. Look past the stats though and you’ll see he’s instrumental to how Klopp’s side plays. He’s perpetually on the move and dragging players out of position which in turn creates space for teammates. What he does sometimes goes under the radar due to the fact Philippe Coutinho, Roberto Firmino and Sadio Mane are the main culprits in attack, but Lallana has been key to unlocking so many Premier League defences this season.

Idrissa Gueye, a player averaging 5 tackles and 2.1 interceptions per 90 minutes, will have to be on his game to shut down Lallana, but it’s by no means going to be easy. 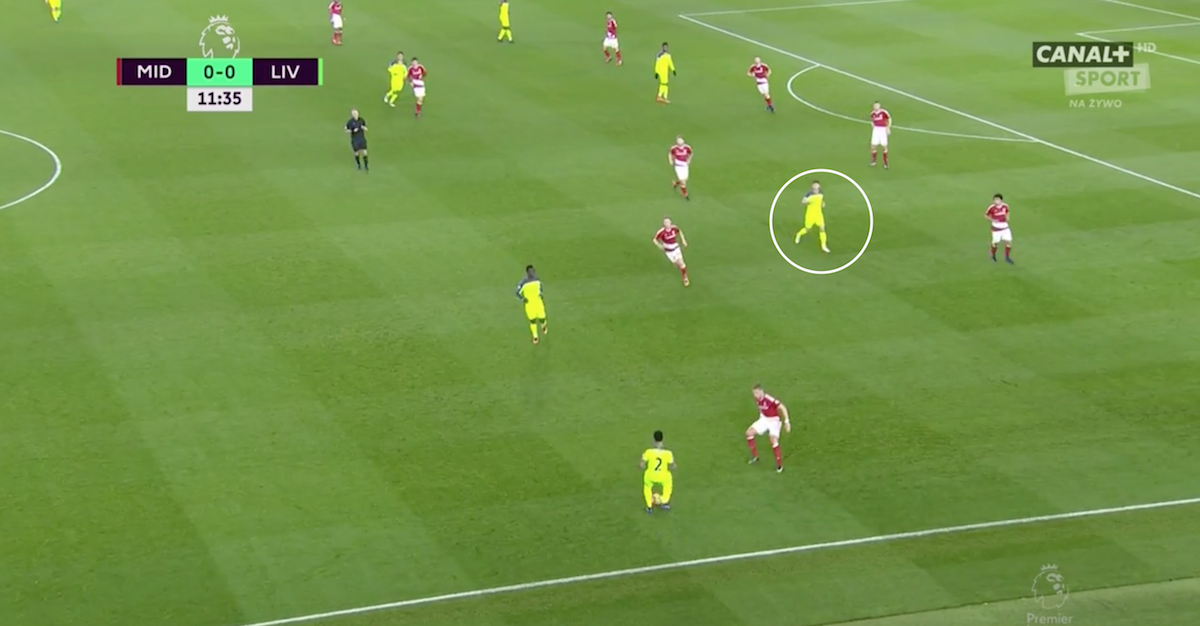 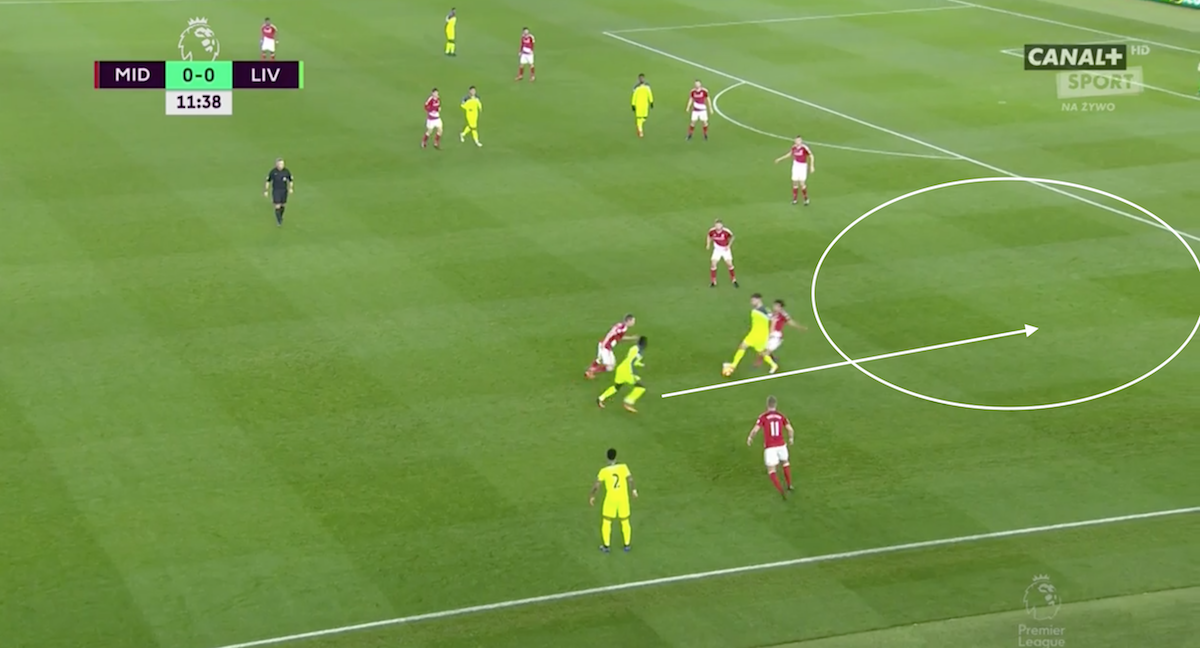 In the two pictures above you see Lallana, circled in the first picture, finding himself in the space between the ‘Boro midfield and defence. With the ball being on the Liverpool right he makes his way over to the ‘Boro left-back, Fabio, and brings him into play. When Lallana drops off to receive the ball the Brazilian is forced to follow because he’s the closest man. This brings the former United man out of the very organised backline and creates space for Liverpool to exploit. In the second picture you can see the space in behind Fabio for Mane to drive into, all because of Lallana’s initial movement.

The home side’s midfielders didn’t track the Liverpool number 20 and it meant the left-back was pulled out of position. Gueye will have to be wary of the positions that the England international takes up. 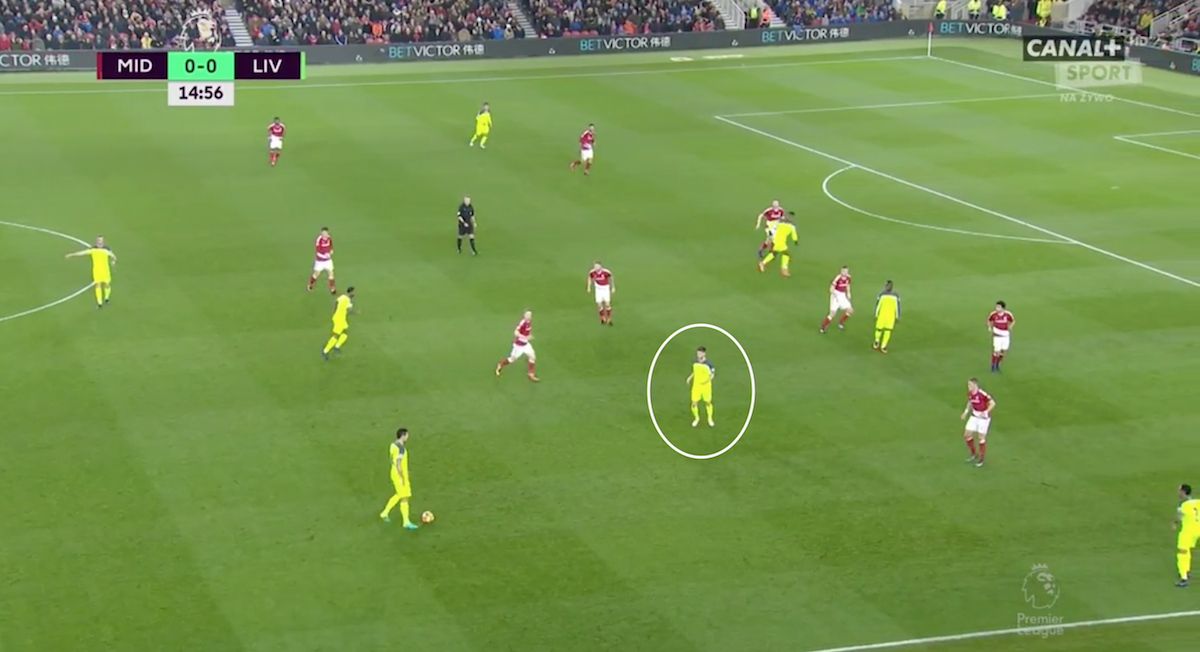 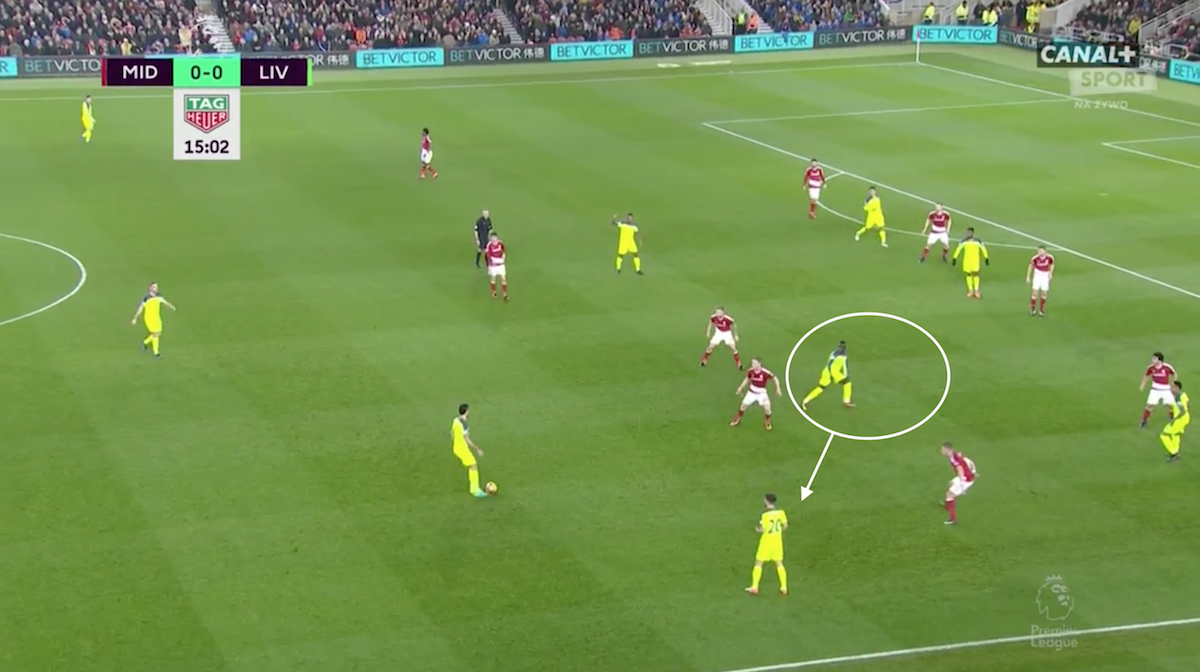 As mentioned in their mid-season review, the ‘Boro midfielders have the tendency to ball watch of sorts. In the initial picture you can see Lallana circled with Lovren in possession. The ‘Boro midfielders push over and in the second picture you can see a line of five in midfield and then a back four. Lallana has moved away from a central position onto the right hand side and the midfielders think because they can see him that he’s nullified. What they fail to realise is Sadio Mane has picked up a position close to where he initially was and because the midfielders are watching the liverpool number 20 they fail to see what’s behind them. It goes to show he doesn’t have to be on the ball to have an influence.

Do you push out with Lallana or do you stay central and plug the space? Gueye is going to have to make some big decision in the heat of the moment on Monday. Toffee fans will hope he makes the correct decisions. 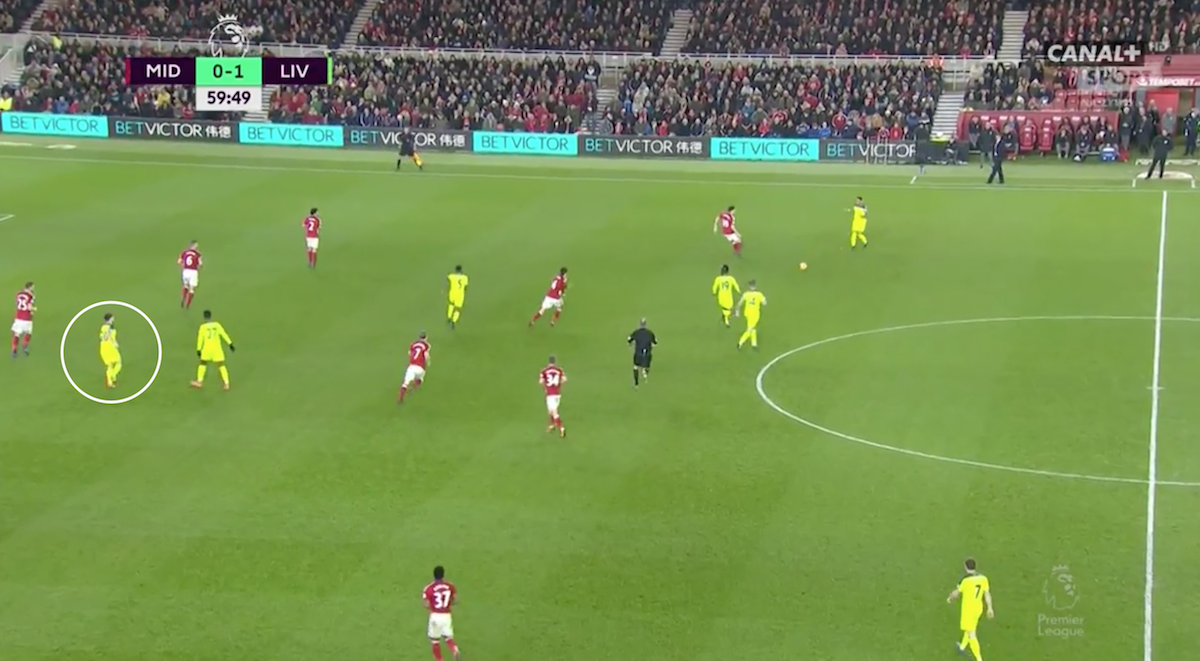 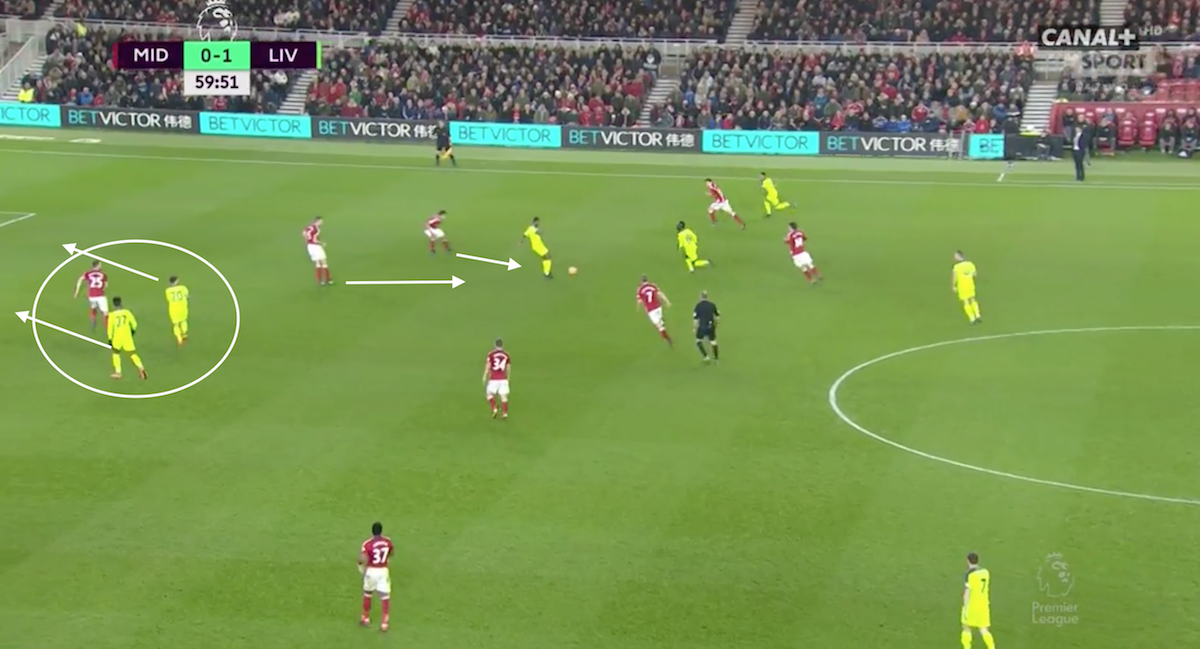 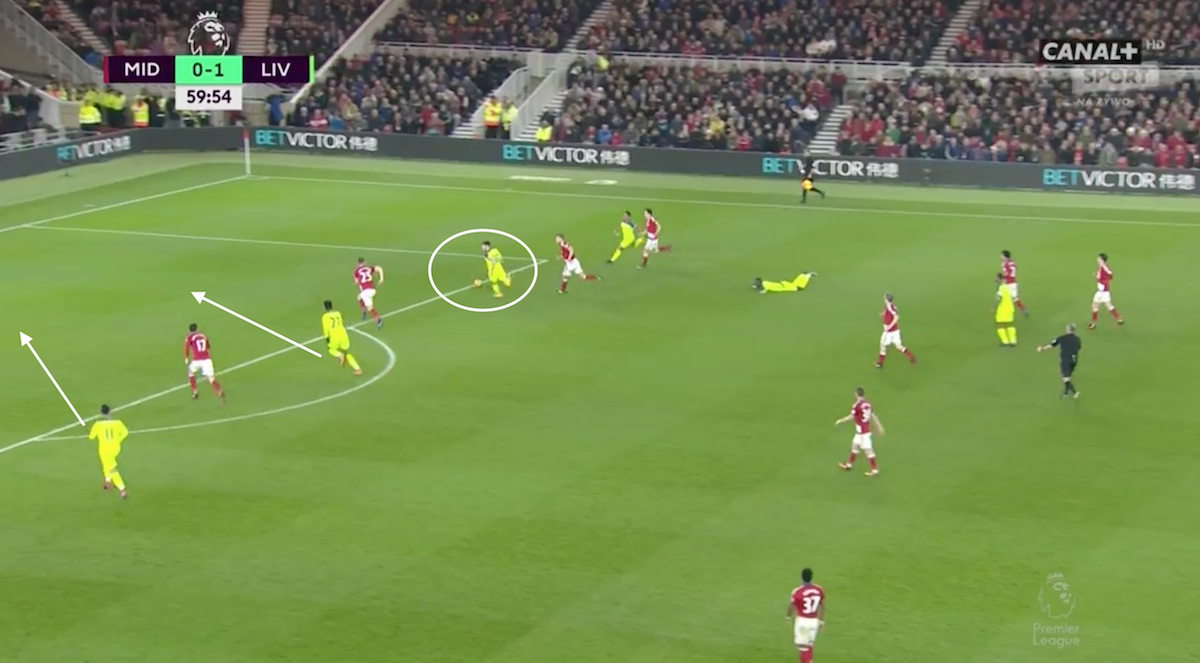 The pictures above are taken during the build up to Lallana’s assist against ‘Boro. In the first picture, circled, he is ahead of Divock Origi. When Liverpool are defending Lallana is a centre-midfielder but when they attack he just takes up dangerous positions. In this phase of play he’s supporting Origi centrally and none of the home sides’ midfielders have picked him up or dropped a little to cover.

As play progresses and Mane works the ball to Gini Wijnaldum both Ben Gibson, the left centre-back, and Fabio, the left-back, push on to engage with the ball. As soon the left side of the ‘Boro defence advance, Origi and Lallana spring into action. The Belgian looks to move behind the right centre-back, whereas Lallana runs across him into the vacant space.

In the third picture you see the ball has found it’s way to Lallana, circled, who has plenty of options. He can look to beat Chambers, put in an early cross or drive into the box before putting the ball in. He opts for the third scenario, and the ball finds Origi who taps home.

If Gueye stops Lallana, that nullifies the link between the Liverpool midfielder and the attack. Liverpool don’t look as fluid without the former Southampton man, as shown in the games he missed because of injury. If he’s effectively man marked out of the game it may give Klopp and his players a problem.