On Thursday evening, Turin will play host to a meeting between familiar foes – Italy and Spain.

If there’s such a thing as a ‘Clasico’ or ‘Classico’ in international football then this fixture is it, over the last decade in particular, it’s certainly never disappointed. Two nations that share many similarities but football culture isn’t one of them. Both, though, are equally admirable and fascinating; the Spaniards’ need to be protagonists with the ball against the Italians who are experts in how to be effective without it.

For the first time ever, both have been placed in the same qualifying group for a major tournament and although they have a win each under their belts, their respective campaigns really start in the Juventus Stadium. They’ve got Albania, Macedonia, Israel and Liechtenstein for company but it’s not unrealistic to assume that La Roja or the Azzurri will claim first and second spot in group G. Only one team from each group is guaranteed a place in Russia, finishing second might not be enough. Put simply, there’s quite a lot riding on the result.

For Spain, it’s also where a new journey could poignantly begin under Julen Lopetegui. This fixture bears significance like no other for every Spaniard, the game which started an unparalleled era of breathtaking domination in 2008 and almost poetically ended it in 2016.

While recent history may suggest otherwise, the Azzurri for so long were Spain’s ‘bestia negra’, the tough nut they could never crack and before 2008, 88 years had passed since la seleccion beat their rivals in a competitive encounter. At Euro 2008, the two met for the first time at a major tournament since the 1994 World Cup- a game marred by controversy which most Spaniards hadn’t forgotten. This wasn’t a match-up that Luis Aragones’ men relished either, “Italy, the team that does a lot with very little,” were the words of Iker Casillas before the quarter-final duel.

“When we had to play against Italy, we all thought the same thing, ‘we always lose’ “, Cesc Fabregas would later say. On a humid, nervy evening in Vienna where neither team performed particularly well, it all came down to penalties. Casillas would save two, Fabregas would score the decisive one and Spain advanced to the semis.

The whole country went wild, nobody caring that they had done it the ugly way, especially the press who focused so much on the ‘curse’ or ‘spell’ or ‘jinx’ finally being broken that you’d think the team had won the trophy and not just squeaked through to the semi-finals. But that’s the point, this was a mental triumph that was as good as winning the whole thing and it was felt by everyone: players, fans and the media. Two more opponents stood in Spain’s way but this was the win that laid the foundations for the greater times that followed. Spain had a notorious reputation for being underachievers but this time they got over the line and gave their bête noire a little taste of their own medicine.

“Italy had kicked our backsides in so many tournaments that you start getting flashbacks of the worst moments. But Aragonés made it a challenge to beat everyone, not just Italy. You walk out thinking you will change history, you win on penalties and that is the moment. All the anxiety, all the fear just melts away. It's as if you've won the whole tournament. When we beat Italy, we were all totally sure we'd be champions.”

La Roja had waited 44 years to touch silverware again but it was that victory that created the base for a period of superiority that the international arena would find too devastating to stop. Opposition managers tried everything but Spain swept them all away. Their premier World Cup win in 2010 was followed by another continental title in 2012- the final against Italy ending in a 4-0 drubbing. They had sealed their place in history too, becoming the first international team to win three consecutive major trophies. 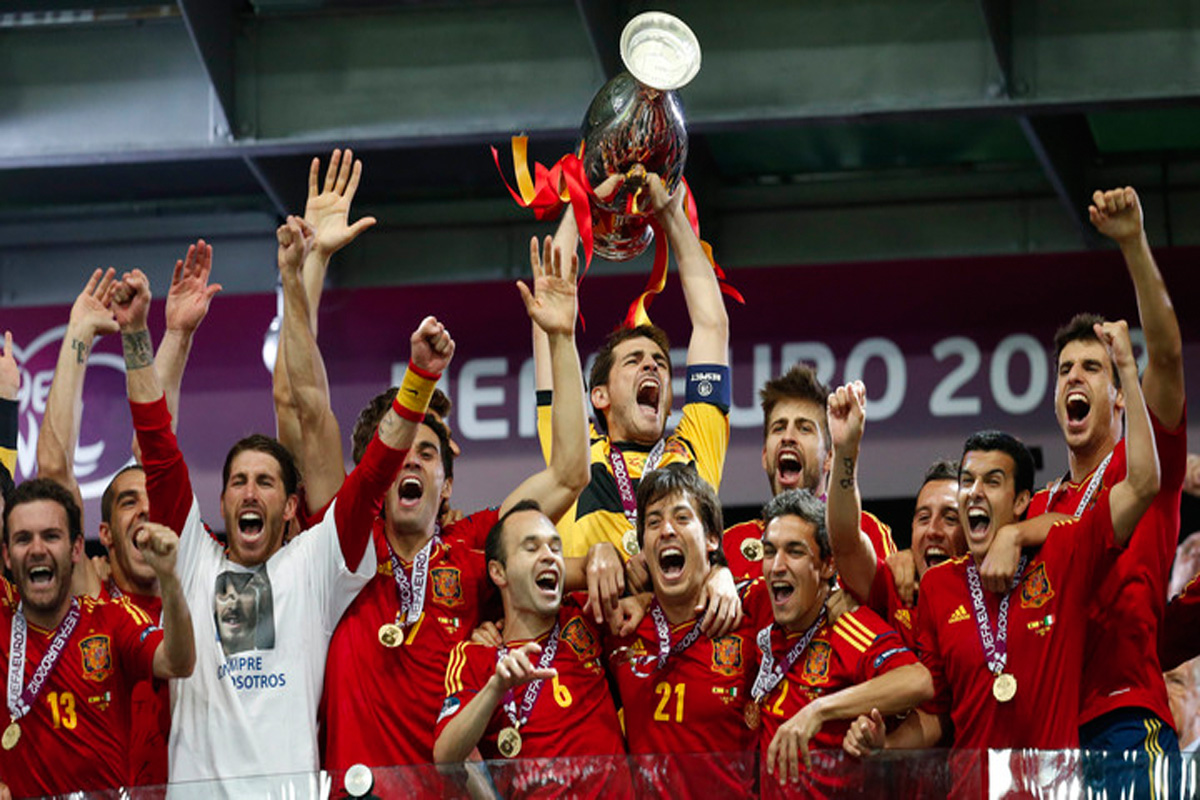 The only debate to be had after the final in Kiev was whether Spain were the greatest team to ever grace the sport. One thing’s for sure, this was definitely the peak of a remarkable ascent to the top of game. The final brutally demonstrating the gulf that existed between Spain and the rest. This side was arguably the closest thing to collective perfection football has seen, with Xavi and Andres Iniesta so inevitably at the heart of it.

From start to finish during the final, Spain asserted their control and authority on the Italians, playing with a ruthless conviction and remaining steadfast to their principles. It’s difficult to think of a final of similar magnitude that was so one-sided.

The world became obsessed with Spain’s possession-based style, Italy included. The team Casillas described as doing so much with so little suddenly wanted it all. Cesare Prandelli’s reign as coach attempted to take the team away from the ideals that rigorously defined them and instead mimic their Spanish counterparts. Spain had ‘tiki taka’, Italy had ‘tiki Italia’.

That approach wasn’t enough to beat Spain in the Confederations Cup semi-final, although it should have been. Brazil’s demolition job on Vicente del Bosque’s charges in the final is understandably seen as the moment things started to unravel for Xavi and co, but Italy deserve their share of credit too. They had dominated the semi-final; pressing Spain as high up the pitch as possible, playing at a ferocious tempo, taking advantage of spaces and taking the ball too. They had more possession in 90 minutes, more control and more chances but squandered every single one before losing on penalties. But they did start an important trend.

It’s something Spain have struggled to come to terms with ever since, how to match opponents’ intensity off the ball, how wrestle back control of games when they are ‘suffering’ and how to do so as a team rather than relying on individual genius. The Netherlands and Chile found success with this tactic at the 2014 World Cup and as a result, the holders were the first team to be eliminated from the competition.

The glorious era was slipping through Spain’s fingers but they were just about clinging on. It briefly looked like they could hold on to their Euro crown in France this summer, having played well in their opening two group games with Iniesta in sensational form.

A slip up against Croatia, however, in the last group match would leave them in second place and hence set up a last 16 showdown with Italy. The end was nigh. Under Antonio Conte, the Azzurri had embraced their old principles, the ones that Spain traditionally feared: defensive organisation, cynicism, work rate and tactical superiority. Unfashionable but capable of bullying those in front of them. And just like Brazil, Holland and Chile, Italy humbled the reigning champions. It was the last ride in an epic journey for del Bosque.

And now, we’re here. It’s come full circle. The Italians possibly thinking that they have the measure of Spain once again.

New manager, Julen Lopetegui has already made some positive changes that del Bosque was unwilling to make. Younger, more versatile players are being introduced and there seems to be a genuine attempt to make the side more flexible and direct with those personnel. It’s a start anyway. Spain have lacked ideas in the last couple of years, this at least brings a welcome change to an approach that grew stale.

Italy, meanwhile, remain undefeated in 51 qualification matches so it will take an almighty effort for Spain to change that on Thursday but if they could, it might go some way towards kick-starting a new era that undoubtedly has the potential to yield success.