Every Swindon fan on the planet would swap places with a Peterborough supporter if given the choice. That's just how different their positions are at the moment. Can Swindon spring a shock on Saturday? Find out with our Swindon vs Peterborough match preview with free tips, predictions and odds mentioned along the way.

Swindon vs Peterborough: Get your tips

Peterborough to keep up the pace in title race

With Peterborough sitting second and Swindon much further down the league in 20th backing the Posh to come away with a win hardly seems like a wild prediction. It's not but we can back it up. For starters, Peterborough have won the last two meetings between the sides and haven't lost in over five years. Then you have more recent form; Swindon have won just three of their last 10 with six defeats. Their wins have all come against teams clustered towards the bottom of the standings. Peterborough are unbeaten in three with two wins and a very respectable draw against Sunderland. With the top two just at their fingertips, motivation to beat a struggling Swindon really shoudln't be too hard to find.

Over the course of the entire season, Swindon have the highest goals per game average in the league at 2.9. Peterborough come in at a pretty highly ranked number six with 2.7. Their meeting earlier in the campaign also went beyond the 2.5 mark as Peterborough ran out 3-1 winners. Peterborough's last 10 away games have served up 27 goals with six of their games containing at least three goals. Swindon's home displays over the same period are very similar. There have been 26 goals scored with, once again, half a dozen matches going over the 2.5 goals. It all bodes well for a glut of goals.

One for the attacking coaches to enjoy with Posh to win

The final prediction we're going to make is to combine the first two tips. That means we pull together the fact that Peterborough will beat Swindon with over 2.5 goals scored in the match. With players like Jonson Clarke-Harris, who has 26 goals to his name, in the Posh team combined with a Swindon defence that has shipped 69 goals this season we feel that there will be plenty of attacking football on display. It's the perfect time to knit our predictions together.

Swindon vs Peterborough: All your pre-match info

Peterborough are hovering dangerously close to being the side that narrowly misses the boat on automatic promotion whilst Swindon are perilously close to the trap door to the fourth tier. Anything can happen in football but the joint worst defence in the league versus the second best attack doesn't bode that well. 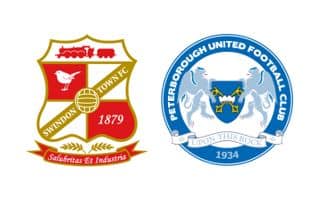