If you offer these sides a point now they'd probably take it; not because it would do them any good but because it would move them towards the end of the season – something they're both desperate for. Will either of them get a win to add the faintest silver lining to the end of their campaign? Find out with our Swindon vs Ipswich match preview with free tips, predictions and odds mentioned along the way.

Swindon vs Ipswich: Our best tips

At least one side to fail to score

When you look over the recent form book it's hardly surprising that we're suggesting at least on of these sides will fire blanks for 90 minutes. Swindon have failed to score in two of their last three home games whilst Ipswich are generally fairly respectable in defence with three clean sheets in five away matches. The Tractor Boys' issues lay going in the other direction and although MK Dons put five goals past Swindon at the weekend there is no danger of that happening here; Ipswich would have to add all their goals together from the 9th March to muster five goals. They've failed to score in over 10 hours of football now, which means blanking in six consecutive matches plus 79 minutes of the match prior to that run.

Prepare to be bored?

Is it cheating if we make you read the above again? It sort of is the same message; Ipswich cannot score goals. Then there is Swindon; as a rule, they don't often score too many either. They've netted just 10 in the past 10 games. With a defence that is reasonably stubborn coming up against an attack that lacks cutting edge then it's not really an affair that screams goals.

Despite the two predictions to this point ridiculing Ipswich's attack we still think they'll have enough to see off Swindon. It's not based on form though. Swindon have now been relegated to League Two but a 10 game form table has them above Ipswich. Paul Cook has made it clear that there will be a major overhaul of his Ipswich squad in the summer, which means his team on Saturday might come out with some fight in them. If that Ipswich turns up, they should beat a low on confidence Swindon.

Key info for Swindon vs Ipswich

It's unlikely to be a game worth recording

Swindon will be spending next season in League Two after their relegation was confirmed in the week. The mood at Ipswich isn't much better despite their mid-table position. It's hardly set up to be a cracker but we guess they use the phrase ‘never say never' for a reason! 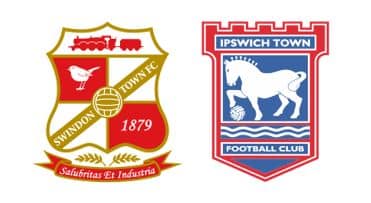