Blackpool come into this match knowing it's a fixture they can win. If they do win, they'll remain firmly in the hunt for a top six finish. The visitors are on a terrific run of form having not lost in 11. Four of those games have been away; they've won all of them. Swindon have won their last two so confidence will be high but their form at the County Ground has been awful of late. They've taken just 10 points from 30.

Blackpool to lead at HT and FT

So, the first of our predictions shows we think Blackpool will run out winners. The next of our tips sees us back them to be leading at half time and full time. We've already spoken over the general match result part of the bet. Why then do we expect them to lead at HT and then see that through? Well, four of their last five away wins have seen them in front at the interval and they've only dropped points from a half time lead once all season.

Blackpool man Yates is far and away the leading scorer between these sides. He was 15 strikes to his name compared to Brett Pitman who has just eight for Swindon. Yates is in good form too; he has three goals in his last two games and three in three from the Tangerines' last trio of away games. Swindon haven't kept a clean sheet in four home games.

All the stats and odds for Swindon vs Blackpool

It's not an understatement to say these two teams both desperately need the points. A decent end to the season will see Blackpool finish in the play-offs; Swindon meanwhile need to get some wins to keep hold of their League One status. Both are in reasonable form over the last couple of games but Blackpool have faced the tougher opposition. If, however, Swindon's in-form centre back Anthony Grant can keep a handle on Yates then the hosts will have a chance of taking something; we just don't see it unfolding that way.

FAQ about Swindon vs Blackpool 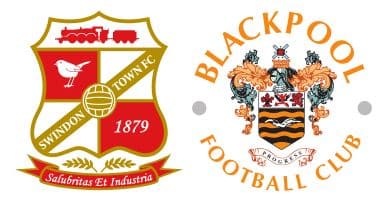