After dismantling Georgia on the road, Greece travels to Friends Arena to try their luck against Sweden. The Blue and Yellow will not be easily tamed as they look to carry their high after their 3-0 win over Kosovo.

Here are our predictions for Sweden vs Greece.

Greece delivered the first blow to Sweden's qualifying campaign for Qatar and will look to have a similar impact on their trip to the Friends Arena. On the other hand, the Swedes will want to avenge their defeat and should manage that given their home advantage. They have won three of their last four international engagements at home, but it will not be easy as the Greeks have won two on the road in the same period.

This new look Sweden side means business and has been involved in high scoring fixtures of late. Their last six matches have finished with at least three goals on offer and this qualifier should not be any different. History also points at an Over 2.5 total goal prediction for this matchup as four of the last five duels have finished with at least three goals.

Blows are usually exchanged when Sweden and Greece come together. Three of the last four H2H meetings have seen both sides get on the scoreboard. This is especially true in their recent outings, where both sides have scored in five of Sweden's last six fixtures. The tally stands at eight in ten for the Greeks.

Sweden vs Greece: Check out the best odds and the latest stats

Match Preview of Sweden vs Greece: Battle to succeed Spain in Group B

Kosovo had no answers as Sweden rallied time and time again to hit the back of the net. The match concluded with a 3-0 scoreline but even the most ardent fan of Kosovo would agree the result could have been much worse. The match showed the defensive and offensive aspects of the Swedes, which would have surely given Greece a cause for concern.

The visitors are unbeaten in the qualifying campaign but lack the offensive output to challenge Sweden. It is their lower productivity levels in the opposition's final third that has put them in this situation. Their three successive draws to kick-start the qualifying campaign can come to hurt them if they do not get one up over direct rivals.

Questions About Sweden vs Greece 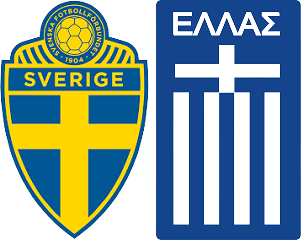 Where is the game being televised? COSMOTE Sport, DAZN Deutsch, and Open TV.

Where is the game being played? Friends Arena (Solna).