It doesn’t take much for Premier League clubs to pull the trigger.

We’re only in November but there have already been four managerial sackings, with Frank de Boer, Craig Shakespeare, Slaven Bilić all already relieved of their duties.

The first of those men, de Boer, was sacked by Crystal Palace after just four games.

But that’s what a poor start can cause in England’s top flight – the board start to panic and, all too often, change manager.

When de Boer was sacked, the Eagles were in 19th, while Leicester City, Everton and West Ham United were all in 18th when they decided to axe their bosses.

Yet, it doesn’t look like Swansea City will be doing the same with Paul Clement, despite the Swans dropping into the bottom two after their 1-0 defeat to Brighton and Hove Albion.

They have only won two games this season but, according to the BBC, there are no plans to get rid of Clement, with senior management having faith in the current boss.

They believe there is ‘absolutely no panic’ and that Clement has ‘credit in the bank’ after keeping the Swans up last season following his appointment in January.

But are they right?

Saturday's loss was their fifth home defeat and they have secured only three points from a possible 18 at the Liberty Stadium. That isn’t the form of a team who can stay up.

Clement has admitted he is partially to blame for the form.

“The responsibility is down to me, the staff and the players. We will continue to work hard. We need to find a way to work even harder,” he said after the Brighton loss.

“A lot of the players in this group have been in this situation before and we have belief we can get out of it, but we don't want this continuing on and on and on. We have to do something about it soon.”

The hostile atmosphere at the Liberty Stadium isn’t helping either, with Swansea’s fans booing their team on Saturday and turning on the club’s hierarchy, chanting: “Get out of our club!”

When the atmosphere at a club becomes bad , it’s hard to turn it around. The club’s owners has overseen little in the way of success since their takeover last season. If Clement is seen as their man, they are increasingly likely to get on the manager's back.

It’s a far cry from last season when the former Derby County boss came in after the Bob Bradley fiasco and kept the Swans in the top flight.

Swansea picked up nine wins under Clement, amassing 26 points in total, having been on only 12 from 19 games before he came in.

Speaking at the end of the 2016/17 campaign, goalkeeper Lukasz Fabianski heaped praise on the Swans boss.

“He deserves all the credit for his brave decisions,” he said.

“For him to do what he has done in little more than four months I would say is pretty impressive from the manager’s point of view. Of course, as players we have done well, but you cannot take any of the credit away from him.

“He has a really good eye for football. Hopefully, we can build on this and continue to improve under him. I am sure it can get better and better.” 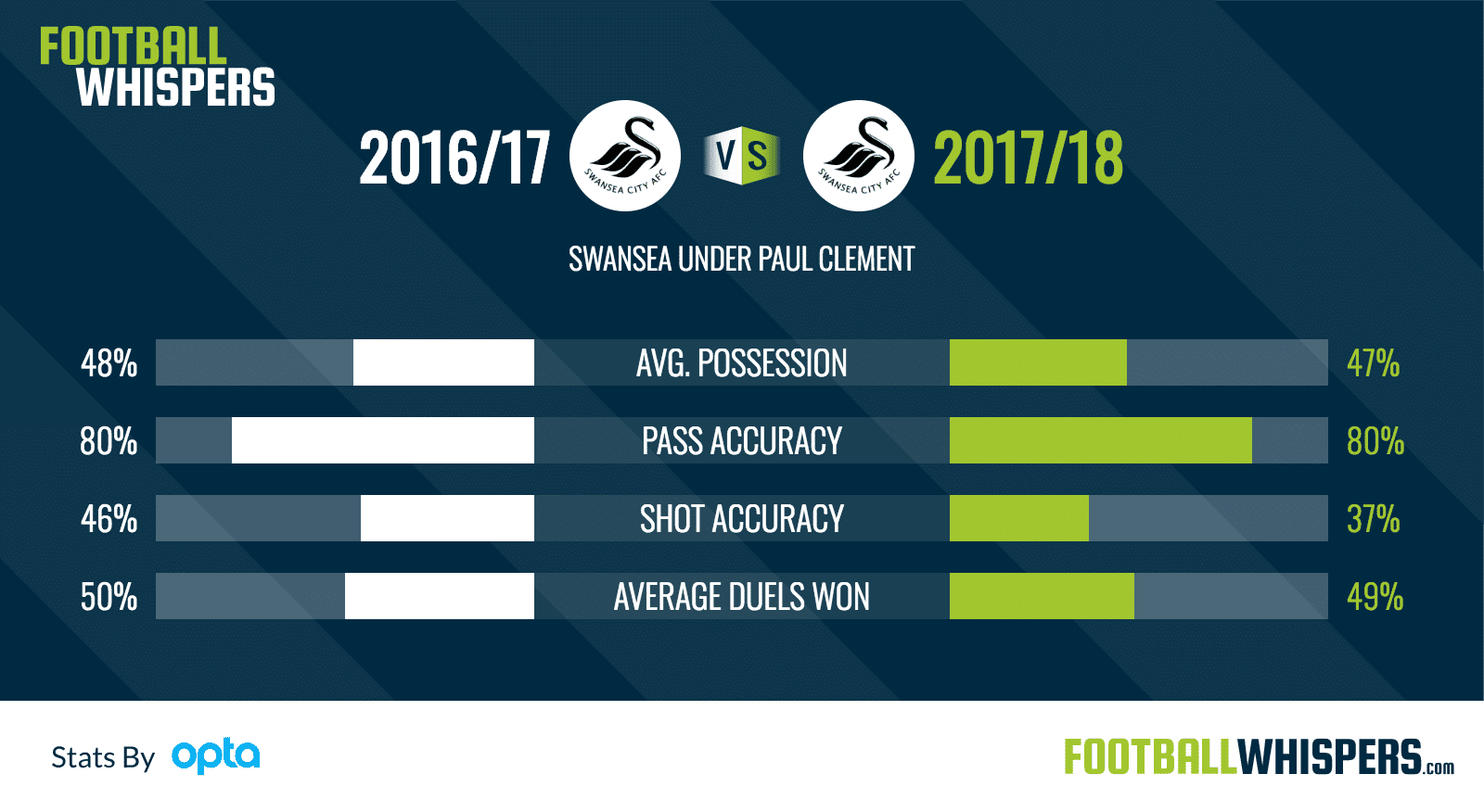 But Fabianski was wrong it hasn’t got better. In fact, it’s got worse, with Swansea struggling without arguably their two most important players under Clement last season – Gylfi Sigurðsson and Fernando Llorente.

If you compare Swans form this season to that last year after Clement took over, they are creating fewer chances per game – 4.7 compared to 7.1.

And without Sigurðsson on set pieces and Llorente’s aerial ability, they have struggled with set piece goals too.

Swansea scored ten set piece goals under Clement last season, but have managed just one so far this season.

If you add xG and xA together, Llorente was expected to be involved in 10.12 goals last season, while Sigurðsson worked out at 10.71.

This season Tammy Abraham and Jordan Ayew lead the way for Swansea, and their xG and xA together is actually higher than Llorente and Sigurðsson – with the Chelsea loanee at 0.52 per 90 minutes and the former Aston Villa man at 0.3.

But if you add Abraham’s goals and assists together this season (5) and Ayew’s (3) it’s slightly below their combined xG and xA of 5.25 and 3.25 respectively, whereas Llorente and Sigurðsson’s actual returns last campaign where higher than expected.

Swansea are definitely creating chances – their xG this season is at 10.13, more than the seven goals they’ve scored – but what will worry them is not taking the opportunities they make for themselves, even if that does just come down to luck.

Unless Clement can refind the form they had last season without Llorente and Sigurðsson, his time may be up as the board start to consider someone else to bring that confidence back.