Reading recorded a massive win on Good Friday as they beat Sheffield United. Can they bag another huge win here to move closer to mathematical safety? Find out with our Reading vs Swansea match preview with free tips, predictions and odds mentioned along the way.

Ending with a point each

Reading have been a much improved outfit since Paul Ince took charge but we think they'll have to settle for a point here. Sure, they're in good form with three wins and a draw from their last five matches but Swansea are in decent shape now as well. The Swans are unbeaten in six games with four wins and two draws. The latest draw in that Swansea run came on Friday against another relegation candidate in Barnsley. When you consider the form of both sides and the fact Reading are now seemingly out of the ‘must win' phase we can see this ending level.

Next up we've got an over 2.5 goals tip. It's not nailed on from a statistical standpoint but there is enough in the numbers to show there is value to be had with the odds on offer. Swansea are the team bringing the biggest doubt with just two of their last five games going over the 2.5 mark. Reading meanwhile have gone north of 2.5 in each of their last three matches. The key measure for us though is the head to head record. Not only have four of the last five head to heads gone over 2.5 goals but the average goals per game in that period sits at 3.4.

Here are the key stats & form guide for Reading vs Swansea

Reading vs Swansea: Let's look at the predicted lineups

Swansea might not be going anywhere this season but they have the chance to have a huge say in the relegation battle. Friday they dropped two points against Barnsley and now the Tykes will be praying the beat Reading.

Reading have improved exponentially with Paul Ince in the hot seat and they look seriously good value for staying in the Championship. The way results have gone of late mean they've got a bit of breathing space over the bottom three but they can't relax too much. A win here though would make it almost job done.

Swansea have found form a couple of months too late to alter the overall feel of their season but the way they're playing right now will give their fans a real sense of optimism ahead of next season – providing they don't get shown up in games like this!

A quickfire FAQ on Reading vs Swansea 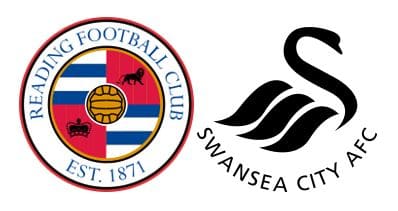