With no excitement to speak of at the top of the Premier League, thankfully those mired in a scrap to avoid relegation are providing plenty of end-of-season drama.

As the Saints earned a point, Swansea City failed to pick up any, losing 1-0 to Bournemouth at the Vitality Stadium.

It leaves us with a nail-biting situation at the bottom, with two of the three relegated teams yet to be determined.

For Stoke City, Saturday was the end of the road, their ten-year Premier League stay finished after losing to 2-1 to Crystal Palace.

However, for West Brom, Swansea, Southampton and Huddersfield Town, the fight remains very much on. On Tuesday night, Swansea welcome Southampton to the Liberty Stadium for a six-pointer and we have taken an in-depth look at both sides ahead of that must-win game.

As you'd expect from two teams fighting for their lives at the foot of the table, much of the analysis on Swansea and Southampton has been focused on what they've been doing poorly, rather than well.

However, they do have their strong suits. Swansea have quick, agile attackers in Jordan Ayew, Nathan Dyer, all of whom were very much involved during the defeat to Bournemouth. The Ayew brothers, in particular, possess intelligent movement around the penalty area.

For example, a quick one-two resulted in a gilt-edged chance for Jordan Ayew against the Cherries, played through by a clever through ball from his brother only to fluff his lines. If the Ayews can strike up the same kind of understanding on Tuesday night, they have the quality to trouble Southampton's defence.

The Saints, however, have their talented attackers. Dušan Tadić blows hot and cold but the Serbian can be deadly when he's on-song, while Charlie Austin boasts a goals per game ratio of 0.71, the fifth-highest in the league.

Southampton also have pace to burn in attack in the shape of Nathan Redmond, who came off the bench to score against Everton on Saturday. Like Tadić, Redmond is a streaky player, scoring for the first time this season against the Toffees, so Mark Hughes will hope his frontmen bring their A-game to South Wales on Tuesday. 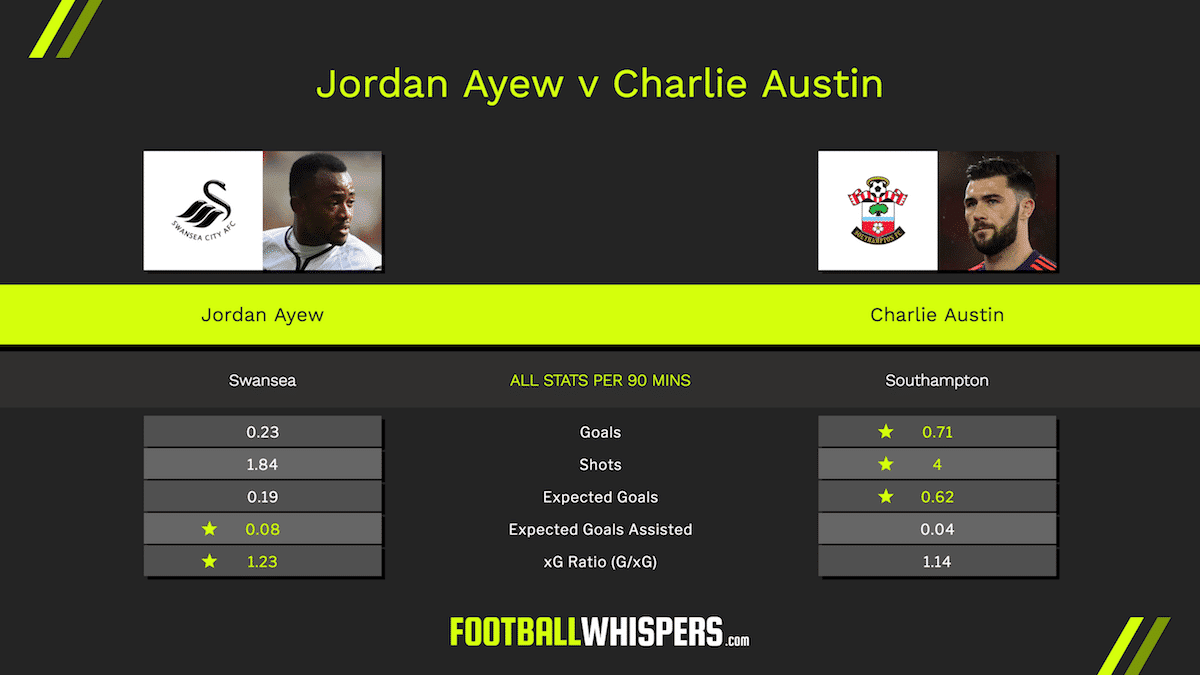 Swansea generally struggle to shut teams out. Carlos Carvalhal's side haven't kept a clean sheet since the 0-0 draw with Huddersfield in March, conceding in each of the seven games since.

They tend to keep it respectable, though, with only Manchester City managing to fire more than three past them in that time.

Southampton are also weak defensively but many of their problems have been in attack where they have largely struggled to finish their chances. Southampton are eighth in ‘big chances created' this season with 46 in total – that's just 11 behind Chelsea – but are 15th in the post-shot xG rankings, meaning they do not take enough of an advantage from the high-quality chances they get.

Southampton's profligacy was perhaps most apparent when these sides drew 0-0 at St Mary's on the opening day of the season. In that stalemate, Manolo Gabbiadini hit the post with a header, Tadić missed the target from four yards and Yoshida spurned a great chance with a late header from close-range.

It's also reflected in the fact Austin is their top-scorer with seven goals, more than Shane Long, Gabbiadini and Guido Carrillo combined. That despite the England striker having missed much of the campaign through injury.

Southampton should edge possession against Swansea. Whereas the Swans have averaged 44 per cent of the ball this season, the Saints have seen much more at 52 per cent.

Southampton's average of 459 passes per game is considerably higher than Swansea's 410 while the Saints are also more adept at winning the ball back, stealing possession in the attacking third 3.36 times per game compared to the 2.69 managed by Swansea.

Southampton also average more shots per game, with 11.91 to 8.33 and deliver more crosses with 21.41 to 17.63, but that isn't all that surprising given Austin's aerial prowess. 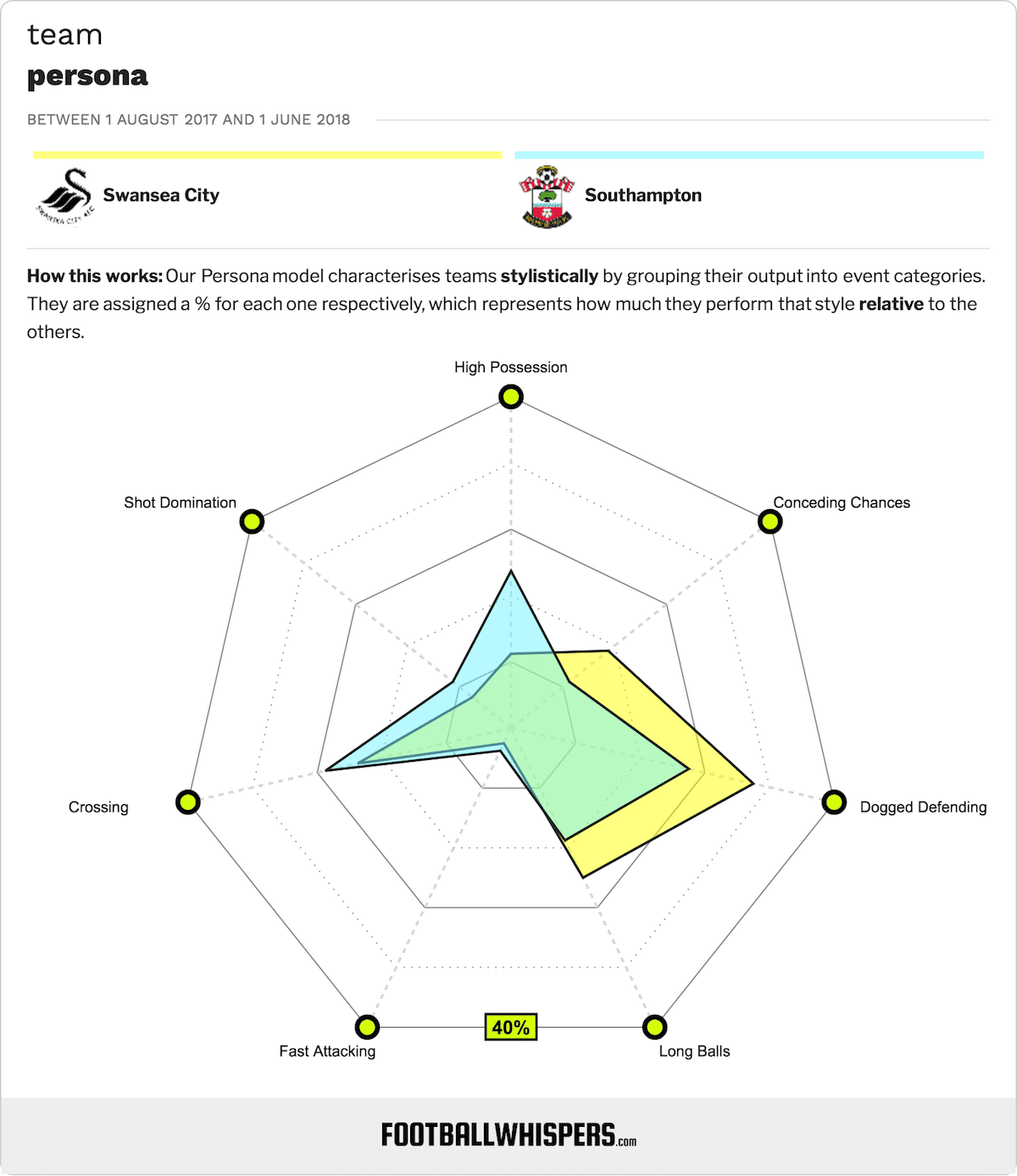 Swansea will most likely line-up with their usual three-man defence of Mike van der Hoorn, Federico Fernández and Tottenham transfer target Alfie Mawson. Against Bournemouth, Carvalhal deployed a 3-4-2-1, with Martin Olsson, Tom Carroll, Ki Sung-yueng and Connor Roberts ahead of the back three. Up front, Jordan Ayew and Dyer supported André Ayew.

Southampton play in the same shape. Their defensive trio will likely be Wesley Hoedt, Jan Bednarek and Jack Stephens, the latter coming into replace the suspended Maya Yoshida. Ahead of them will be wing-backs Ryan Bertrand and Cédric Soares with Pierre-Emile Højbjerg and Oriol Romeu in the centre.

Like Carvalhal, Hughes favours two men supporting a lone striker. Against Everton, Tadić and Mario Lemina slotted in behind Austin but Lemina could be dropped to the bench for Redmond after the latter's goal at Goodison Park.

Winless in their last seven games, it's difficult to choose Swansea's outstanding player but, with seven goals, Jordan Ayew carries as much threat as anyone. Tammy Abraham has struggled to replicate his excellent early-season form but the young England striker remains a dangerous option from the bench.

It would be easy to go with Austin but goalkeeper Alex McCarthy has arguably played as well as any of his Southampton team-mates recently. The 28-year-old showcased some fine shot-stopping abilities against Everton, too, including a full-stretch save to keep out a Leighton Baines free-kick.

The Carvalhal love-in is long over. The likeable Portuguese coach charmed everyone with his bizarre press conference analogies and metaphors after being appointed at the end of December but, having failed to win in two months, he's finding fewer reasons to smile.

Hughes hasn't fared much better. Sacked by Stoke in January, he has failed to turn Southampton's stuttering form around since replacing Mauricio Pellegrino in March. Hughes has never been relegated from the top-flight as a manager but, lose on Tuesday and he may not be able to say that for much longer.

Mawson v Austin. The Southampton forward will fancy his chances at the Liberty Stadium but, with 3.19 aerials won per game, Mawson is as well-equipped as anyone in the Swansea side to stop him.