No, from the outset, it was clear that Swansea City and Southampton were gearing up for a good old-fashioned relegation slugfest.

It wasn't pretty. These games rarely are. However, there can be no denying that, as the clock ticked on and Sky Sports continued to train its cameras on various nail-biters in the Liberty Stadium crowd, it was strangely gripping viewing.

This wasn't the glitzy super-football of Manchester City or the riveting attacking waves of Liverpool. No, this was the Premier League at its edgiest, tension pervading every agonising moment.

In the end, Southampton edged it thanks to substitute Manolo Gabbiadini's second-half strike.

As the Saints seized the initiative and clinched three precious points in their quest for survival, Swansea plunged further into despair, another whimpering defeat sucking them further into the bottom three. As a result, West Bromwich Albion, despite their rousing revival under Darren Moore, have been relegated.

Southampton host Manchester City on Sunday as Swansea welcome already-relegated Stoke City to the Liberty in a game they simply have to win, while hoping that Huddersfield Town don't get anything from their clash with Arsenal.

Here are five things we learned from Southampton's victory over Swansea.

As the second half wore on and the score remained goalless, Mark Hughes looked to his bench and saw a few attacking options staring back at him. The manager decided to be bold, replacing Nathan Redmond with Shane Long before throwing on Gabbiadini in place of Jan Bednarek.

They were both positive substitutions and, with the prospect of Manchester City looming on Sunday, you could hardly blame the Welshman for deciding to really chase the game.

It turned out to be the right move. Gabbiadini has lost the form that made him a cult hero at St Mary's after arriving from Napoli last January but he remains a genuine poacher, a player who comes alive when the ball is loose in the penalty area.

The Italian proved it, too, pouncing to fire the winner home after Lukas Fabianski had denied Charlie Austin.

Just four minutes after being summoned from the bench by his manager, Gabbiadini netted one of the most important goals in Southampton's recent history.

He deserves an enormous amount of credit for his penalty box sharpness but his manager should take some of the plaudits, too, for both the timing and impact of his substitutions.

Hughes must wish Austin was blessed with Shane Long's pace, or that Long was blessed with Austin's clinical finishing. Unfortunately, they have their individual strengths and, thanks to Austin's better goals return this season, you can't begrudge Hughes starting him in a game like this.

However, Austin's most promising opening in the first half came when Nathan Redmond threaded a decent through ball to the striker. But Austin, slow across the ground, failed to get there ahead of Fabianski.

As the striker grimaced, Hughes threw his arms in the air in disgust in his technical area. Their reactions told you everything. Austin simply had to bury that. “I would have put that away,” Hughes probably muttered under his breath.

Luckily for Austin, Gabbiadini provided the clinical edge in front of goal, albeit with only his second goal since October.

Swansea's reliance on the Ayews

In lining up with a 3-5-2, Carlos Carvalhal places most of his hopes for attacking football on Jordan Ayew and André Ayew. And while the brothers are a far cry from Wilfried Bony at his peak or the halcyon days of Michu, Swansea looked most menacing when either of them were in possession.

One of the most eye-catching moves of the game came when Jordan Ayew cut inside, ghosted past Cédric Soares' challenge and unleashed a brilliant right-footed effort. It looked top corner-bound but, thankfully from a Saints perspective, Alex McCarthy was on hand to tip it over for a corner.

André Ayew hasn't scored since he returned to the Liberty Stadium in January but it's easy to see why managers like having him in the team. He's strong, quick and never stops running. While they are admirable attributes, Swansea could have used a bit more killer instinct in a game of this significance.

Tadić as enigmatic as ever

Premier League enigmas are certainly not a new thing but, whereas Marko Arnautović has discovered a sense of consistency at West Ham United, Dušan Tadić – a fellow enigmatic attacker – went missing on Tuesday evening.

With only 21 fewer opportunities created than Silva, it's clear that the Serbian has considerable powers of invention, but he lacks the consistency that has brought some of the aforementioned players to dizzying heights.

True, Tadić isn't playing for a top-six side but there is a sense the 29-year-old doesn't turn up on a weekly basis. Such an idea was supported at the Liberty Stadium. After two goals in the win over Bournemouth, Tadić struggled to shape the outcome of the Everton game before going missing against Swansea.

That is not to single Tadić out, however, as Redmond was just as ineffective, his lack of contribution reflected by the fact that he was the first man hooked off by Hughes. 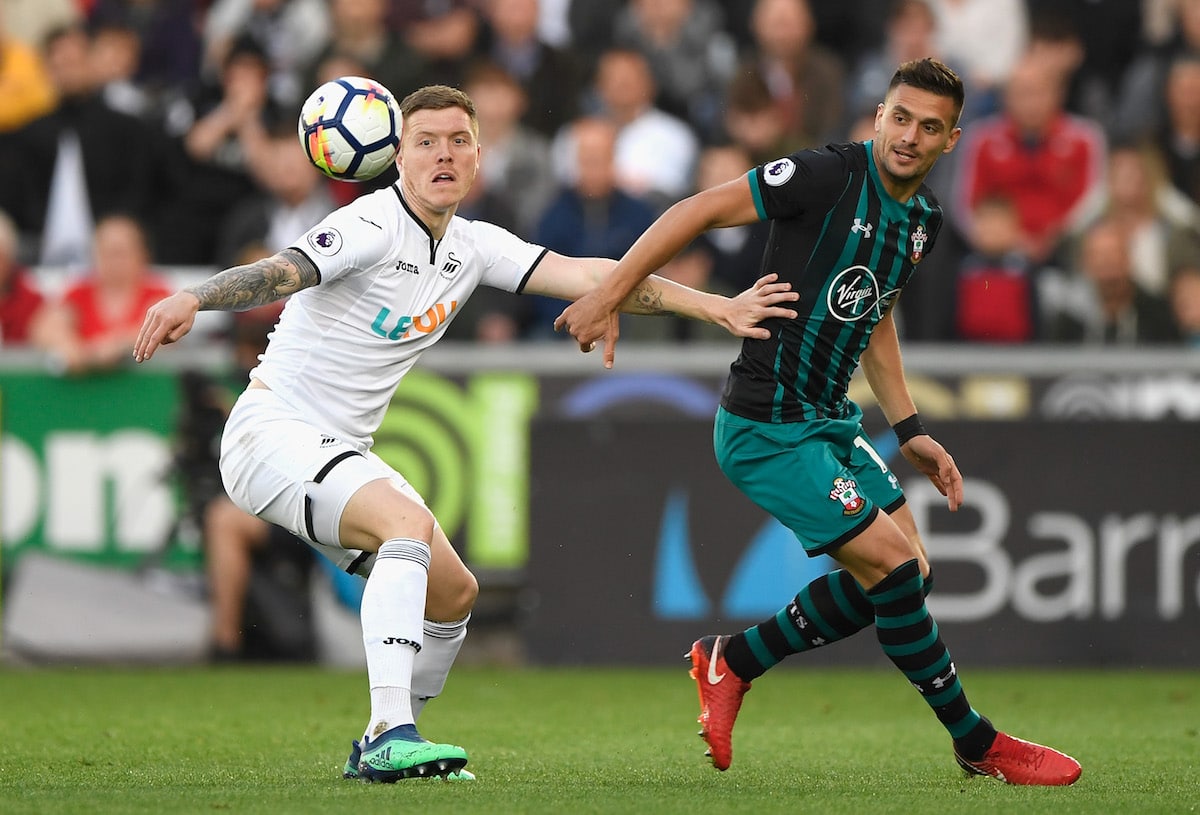 Llorente would have loved this game

Swansea's gameplan was evident from the outset: bombard the Southampton penalty area with as many crosses as possible. By half-time, the home side had already delivered 14 from open play into their visitors' box but to no avail.

Sam Clucas glanced a decent header wide but, as many of the passes went unconnected, it became clear that this is precisely the kind of game Fernando Llorente would have relished. The Spanish striker scored 15 goals for the Swans last season before agreeing to join Tottenham Hotspur in the summer as a back-up to Harry Kane.

However, had his 6ft 4ins frame been attacking some of Swansea's crosses on Tuesday night, it's fair to say one or two may have found the back of the net.

As it were, Swansea decided to pepper the Saints box with crosses when neither of the Ayews were ever really close to connecting to them.

The point was hammered home in a move involving two of Swansea's substitutes. Luciano Narsingh, introduced to add fresh pace to a tiring side, hung up an appealing cross deep into the box. Tammy Abraham, who replaced Martin Olsson, wasn't tall enough to get his head on it, highlighting Swansea's lack of aerial prowess.