When he was appointed, the appointment of Carlos Carvalhal as the new manager at Swansea City would hardly have inspired Swans supporters who have endured a gradual slump in recent years.

The Portuguese boss arrived after being sacked by Sheffield Wednesday following defeat to Middlesbrough with the Yorkshire club sat 15th in the Championship.

Not everything in life makes sense. But, when you are bottom of the Premier League with just three wins in 20 games, handing the reigns to a coach with no English top-flight experience, struggling in the second-tier, seemed like madness.

How wrong we were.

Seven league fixtures later, the Swans have lost only once – to Tottenham – winning four games and conceding just six goals, an amazing turnaround for the Welsh club which has seen them climb out of the relegation zone and up to 16th.

The Portuguese certainly has a unique way with words and after beating Arsenal he said: “When I arrived, 100 per cent of people asked would've said that the team were relegated. Then, when we beat Watford, maybe two would've said that these guys are not dead, that maybe they are still breathing.

“After we beat Liverpool, I said maybe now 20 would say in this moment that we were doing something. Now, maybe 30 or 40 out of 100 would consider we have a chance. I said last time we were not in intensive care but in hospital receiving visits. We are nearer now to leaving the hospital – we are not too far away from the doctor letting us go home.”

Before his arrival, the Welsh outfit had shipped 31 goals in 20 games.

They may only be one point above the bottom three with 11 games to go, but it feels like a massive victory in a short space of time.

It’s not been the easiest run of games either, facing three of the current the top six. Away trips to Leicester City and Newcastle United are never easy, but his crowning glory has been the wins over Arsenal and Liverpool.

Although it’s a small sample size, what Carvalhal has done has been instantaneous and impressive.

Over his seven league games, according to Football Whispers data, Swansea’s expected goals against (xGA) per game has come down to 0.64, compared to 1.56 under Clement. That is a huge improvement defensively, especially when you consider he didn’t sign anyone to improve the back line during the January transfer window.

After trying a couple of different formations and line-ups, the Portuguese coach has settled on 5-4-1, adding an extra man at the back while keeping bodies in midfield.

Clement had gone from 4-3-3 and 4-3-1-2. Carvalhal has added two more men the opponents have to beat, but has given the full-backs licence to bomb forward when the situation is right.

In his final seven games of Clement's reign, the Swans averaged 14.7 tackles and 9.1 interceptions per 90. Under Carvalhal they are managing 14.1 and 11.2 respectively.

That has come about from being in the position to break up the danger – a benefit of thew system.

Going forward their expected goals (xG) return has dropped to 0.35 from 0.79 per game. However, the pay-off is they are now a much more solid unit. 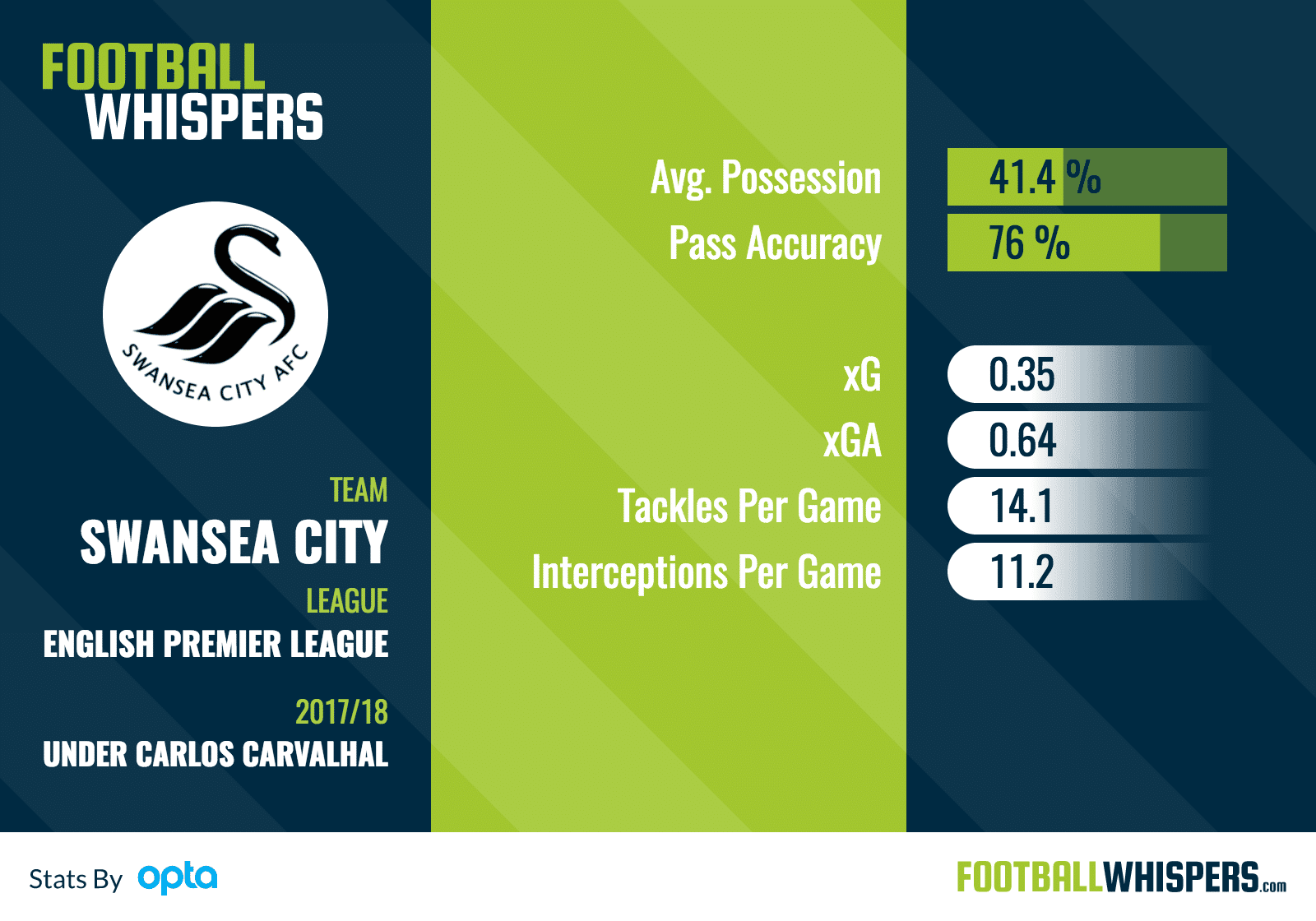 With more bodies in the middle of the park, Swansea have improved their possession stats, up to 41.4 per cent in the last seven games, and are completing 76 per cent of their passes, up from 65.7 per cent.

The addition of André Ayew, back from West Ham United, should help their attacking options. He can be deadly from deep, timing his runs into the box and providing an aerial threat, which is still underrated in the Premier League.

Another member of the squad who has benefited from Carvalhal’s arrival is South Korea international Ki Sung-Yueng. The midfielder was man of the match against Burnley, scoring the winner in the 1-0 victory.

He also provided assists in the draw at Leicester City and the FA Cup win over Notts County. The former Celtic star has enjoyed the impact the new boss has made.

Swans fans will hope this is not just a prolonged ‘new manager bounce’. The telling factor could be that he is achieving these results with the same players who failed under Clement.

Nowhere has the contrast been more stark than in midfield; everyone now seems to know their role and where they are meant to be. Ki is the anchor, using his superb vision and passing ability to link everyone together and as was prominent against Arsenal, Sam Clucas is growing into a true box-to-box threat.

“Tactically, all over the pitch he [Carvalhal] makes everyone work hard,” Ki continued. “Even though I don’t say anything about him, he’s changed the team now. He’s changed the players. Everyone knows what to do on the pitch, so he has made a big difference.”

It may be only seven games, but there are clear improvements from Carvalhal’s Swansea, both on the pitch, and in the statistics.

A stern and organised defence has given them a chance at survival, his next job will be to put more “meat on the barbecue” upfront. If he can do that without disrupting their record at the back, the Liberty Stadium will continue to host Premier League football next season.