A late header from captain Jamaal Lascelles gave Newcastle United a 1-0 win over Swansea City at the Liberty Stadium.

The game looked to be heading for a stalemate until Lascelles rose to meet Matt Ritchie's corner to clinch the Magpies' second win of the season.

The victory lifts Newcastle up to tenth, while the Swans are languishing down in 15th having managed only four points from their first four games.

We've rated the players' performances at the Liberty Stadium. If you agree or disagree, tweet us at @FB_Whispers.

Premier League Goalkeepers Who Could Get An… by FootballWhispers

Made a brilliant save to deny Joselu, stretching to get his fingertips on the ball and tip it beyond the post. Top-drawer goalkeeping from the former Arsenal stopper, which provided the best moment of the first-half. He was well beaten by the power in Lascelles' header. 6

Had the most touches of any Swansea player in the first-half but was unable to link up effectively with either Abraham or Ayew. Was booked for a cynical trip on Gamez. Didn't complete one of his six crosses into the box. 5

Showed some early signs of strength up against Jacob Murphy but was lucky when the Newcastle winger spurned a great chance to score having been caught slightly out of position. Managed to win six duels and make seven clearances, so he did a lot of cleaning up at the back. 6

Came within a whisker of opening the scoring when he rose highest to meet a corner, just guiding his header wide. Was beaten in the air by Lascelles for the goal and perhaps should have attacked the ball as it came in. He won nine duels but will be frustrated that he couldn't stop Lascelles. 6

Was solid at left-back, even if he wasn't found as high up the pitch as Naughton on the opposite flank. 6

The former Hull midfielder performed his duties efficiently, shielding the defence and distributing passes quickly to get Swansea higher up the pitch. In stoppage-time, as Swansea pushed for an equaliser, he ballooned a corner well over everyone's heads, before failing to beat the first man two minutes later with a free-kick – a lack of quality at the crucial time. 5

Saw plenty of the ball early on but was sloppy with his passes and his first touch looked a bit loose at times, perhaps a sign that he was too eager to please and lacking a bit of match sharpness. There was one moment when he was dribbling through the Newcastle midfield and forgot to take the ball with him – summed his day up. A debut to forget for the Portuguese youngster. 4 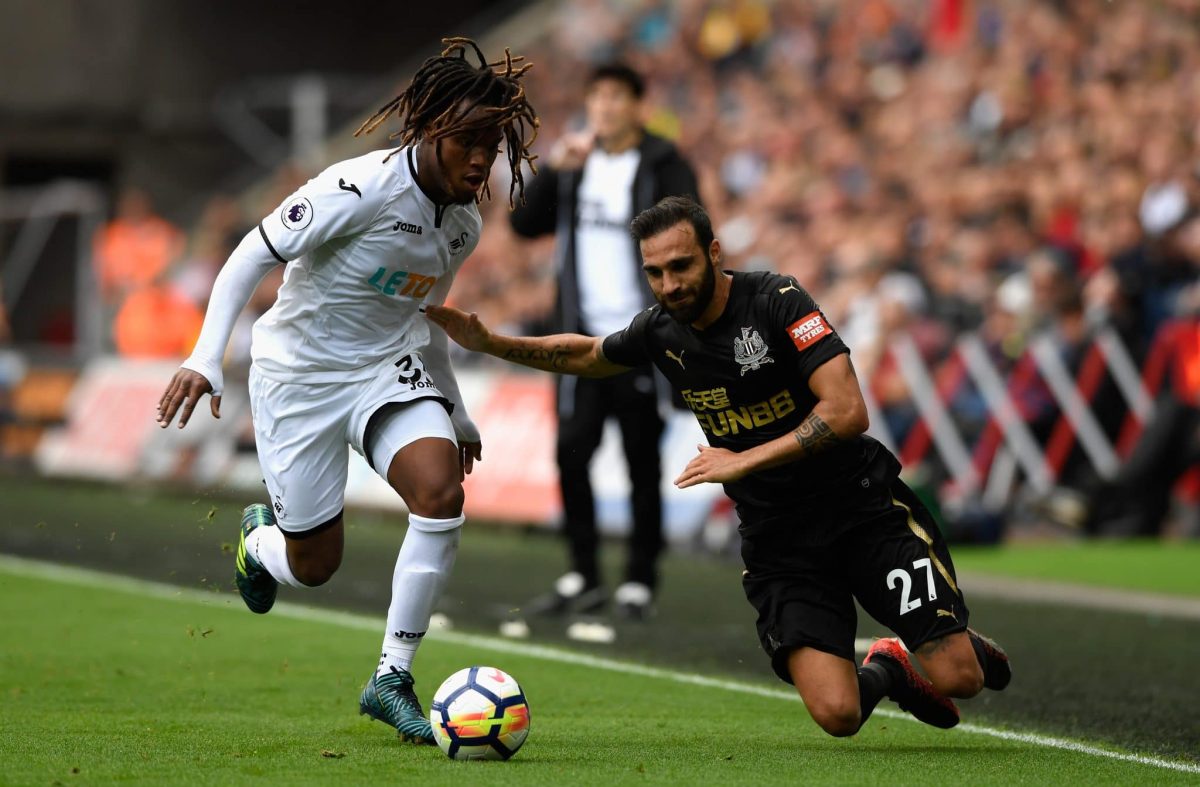 Was very tidy in possession without penetrating the defence all that much. Tested Elliot with a snapshot at the near post in the second-half having been found by Fer. 5

He started as the most advanced in a midfield diamond but wasn't as influential in the final third as his manager would have liked. Completed 84% of his passes and found Abraham with a brilliant through-ball, from which the young striker should have finished. 6

Was relatively quiet until he was given the clearest chance to score, being found in behind by Fer only to round the goalkeeper and fail to beat Lascelles on the line. The striker perhaps took his time settling his feet as he went to put the ball in the net, allowing Lascelles to scamper back and save Newcastle. 5

Looked lively and sharp up top and created a chance for himself when he nicked the ball off Isaac Hayden before producing a save out of Rob Elliot. He certainly put a big shift in up top as he tried to keep him as involved as possible but to no avail. 6

Replaced the debutant but was unable to grab an equaliser on his first appearance following his return. 6

Came and couldn't add much to the quest for a goal. 6

Was called into action when he kept out Ayew's effort and had little to do apart from that, much to his relief. Made some crucial punchesa late on as Swansea bombarded the box with crosses. 6

The right-back enjoyed a decent enough afternoon, making two key passes as he helped his side to a clean sheet. Made some purposeful forays and showed some good vision to loop a pass into Perez's path which set up a great chance. 6

The Magpies captain busted a lung to get back and clear Abraham's shot off the line, leading by example, and eclipsing those heroics at the other end when he rose highest to head home from a corner to clinch three precious points. Not only did he score the winning goal, his defensive work was sound throughout, making nine clearances and two interceptions. 8 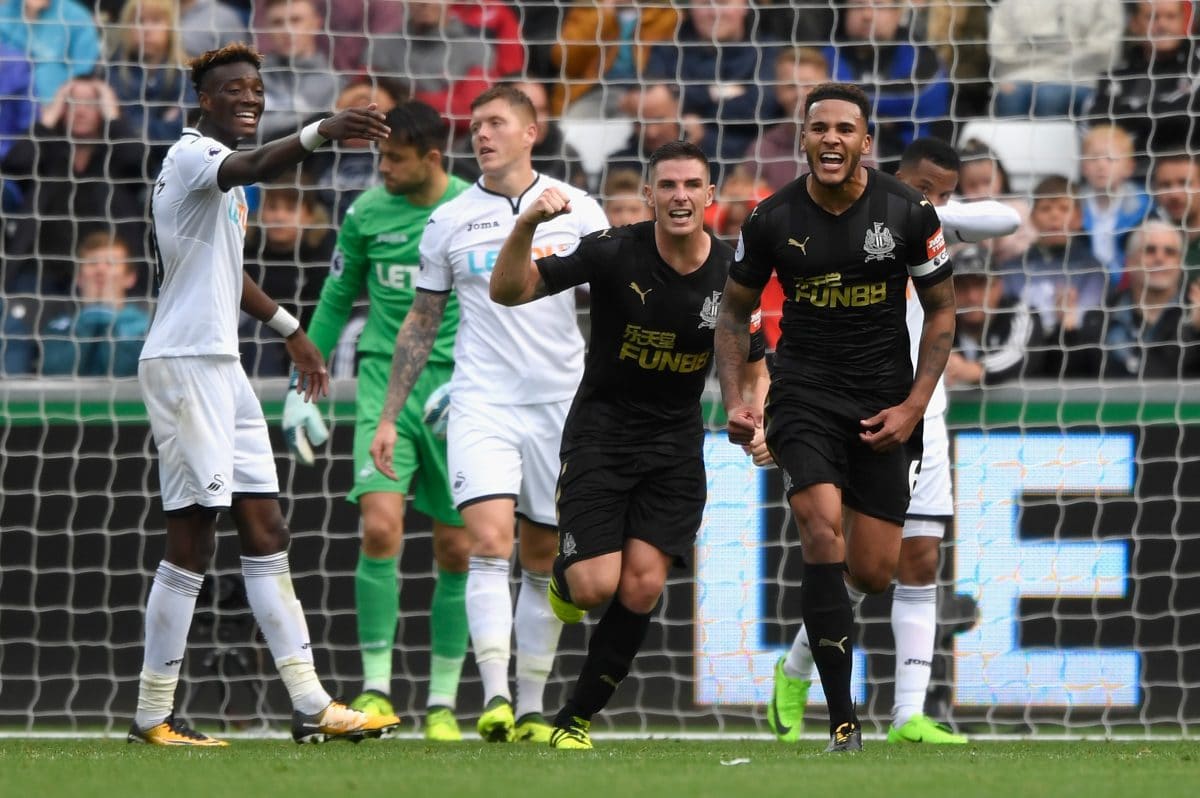 The Republic of Ireland centre-half will have busier afternoons this season but he dealt with pretty much everything Abraham and Ayew tried to do, making five clearances throughout the game. 6

Did what he had to do defensively to help the Magpies keep a clean sheet and pick up their first win on the road this season. 6

Received an early booking for taking out Sanches as Swansea looked to break. Battled well in the middle throughout but was dispossessed a couple of times before being substituted off. 5

Conceded a free-kick in a dangerous area after just two minutes having been caught in possession and should have been booked for a dive when he tried to deceive the referee and win a penalty. His passing was generally on-point, completing 84% and he made more interceptions and won more tackles than anyone else on the pitch, with five in both departments. Impressive. 7

Had Newcastle's first clear-cut chance when he latched onto a long ball forward but could only loop the ball over the bar. Faded quickly though and was replaced by Christian Atsu on the hour mark. Rafael Benitez will hope that the winger can have more of an impact following his move from Norwich City. 5

Struggled to get into the game but came into it more in the second-half. Squandered a presentable opportunity when he raced into the box and drilled a shot straight at Fabianski's feet when he should have made the keeper work more. 6

Delivered the cross onto Joselu's head for a great chance and was generally involved going forward but struggled to create chances regularly.

Was perhaps a bit lucky to stay on the pitch when his high foot almost caught Mawson square in the face. He was booked for it, but some Swansea players called for a red. His delivery from set-pieces was always going to ask questions of the Swansea defence and they had no answer when he found Lascelles. 7

Must have thought he had scored the opener when his header was brilliantly kept out by Fabianski. Looked a threat throughout, using his height and physicality well against the Swansea defenders. 6

Showed some good bursts of pace after coming on, but gave away the ball twice when Newcastle were on the break. 5

Added fresh legs to the midfield for the final 20 minutes. 6

Came on and got himself booked. Out of favour still. 5