Swansea City picked up three priceless points after beating hapless Leicester City 2-0 at the Liberty Stadium. First-half goals from Alfie Mawson and Martin Olsson were enough to see off Claudio Ranieri’s team who, as a result, are sucked further into the relegation dogfight they were desperate to avoid.

The Swans added to impressive victories under Paul Clement against Southampton and Liverpool to move four points clear of the relegation zone, while the Foxes still haven’t scored a Premier League goal in 2017 (that’s 10 hours without scoring).

Lukasz Fabianski – Had little to do. Last time the Foxes came here, Mahrez fired a hat-trick past him so the Polish international would have been relieved to enjoy a much quieter afternoon but did make a crucial stop to deny Slimani one-on-one to ensure his 100th appearance for the club ended with a clean sheet. 7

Kyle Naughton – Did his job down the right diligently and won six aerial duels – more than any other player on the pitch. 6

Federico Fernandez – Set-up his defensive partner for the goal, heading the ball back to him after Sigurdsson’s free-kick had been half-cleared. 7 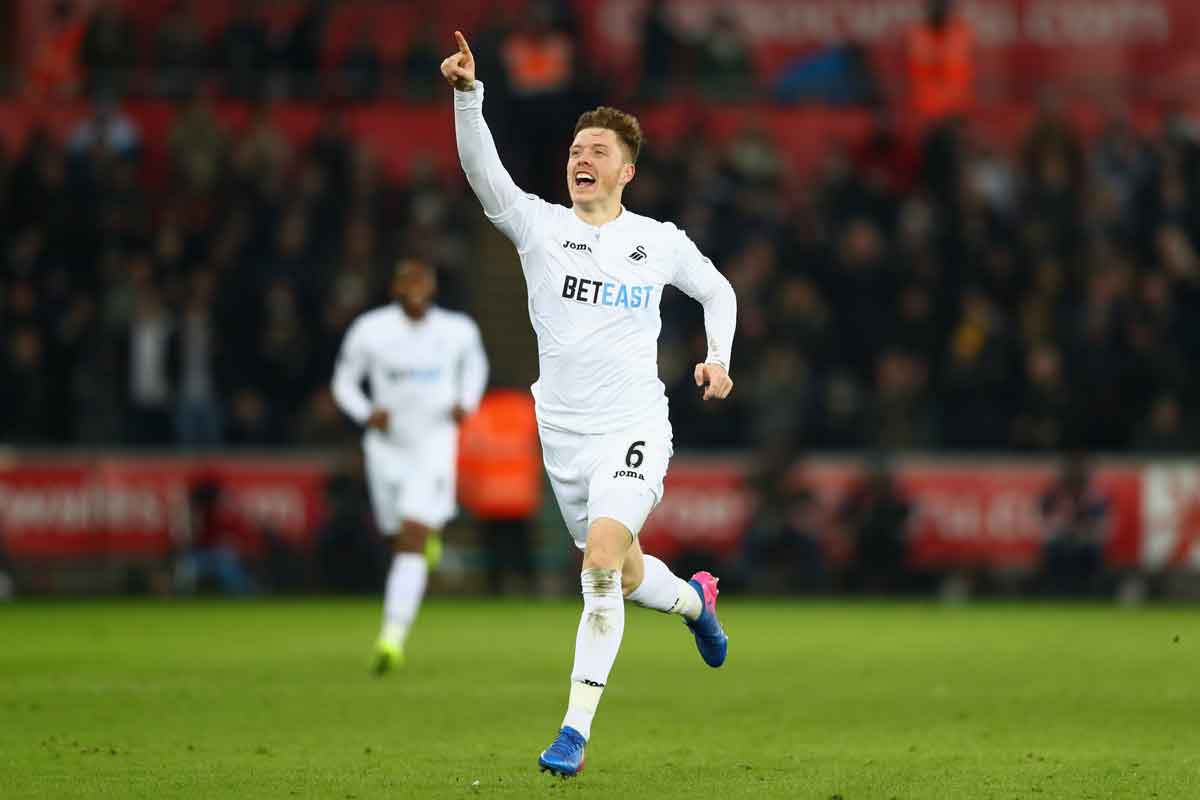 Alfie Mawson – Confident with the ball at his feet playing out from the back and scored a beautiful volley to explode the game into life, his third goal in six league games. Not bad for a centre-half! Goal will make the headlines, but he defended stoutly. Man of the match. 8

Martin Olsson – Looked dangerous down the left early on and capped off a fine move with an excellent drilled strike for the second goal on the stroke of half-time. 7

Leroy Fer – Booked for scything down Vardy. Confident performance, powered through Leicester’s midfield on several occasions, including one instance where he teed up Sigurdsson. 7

Jack Cork – Extremely hard-working performance and did well to close down Leicester on several occasions. 6 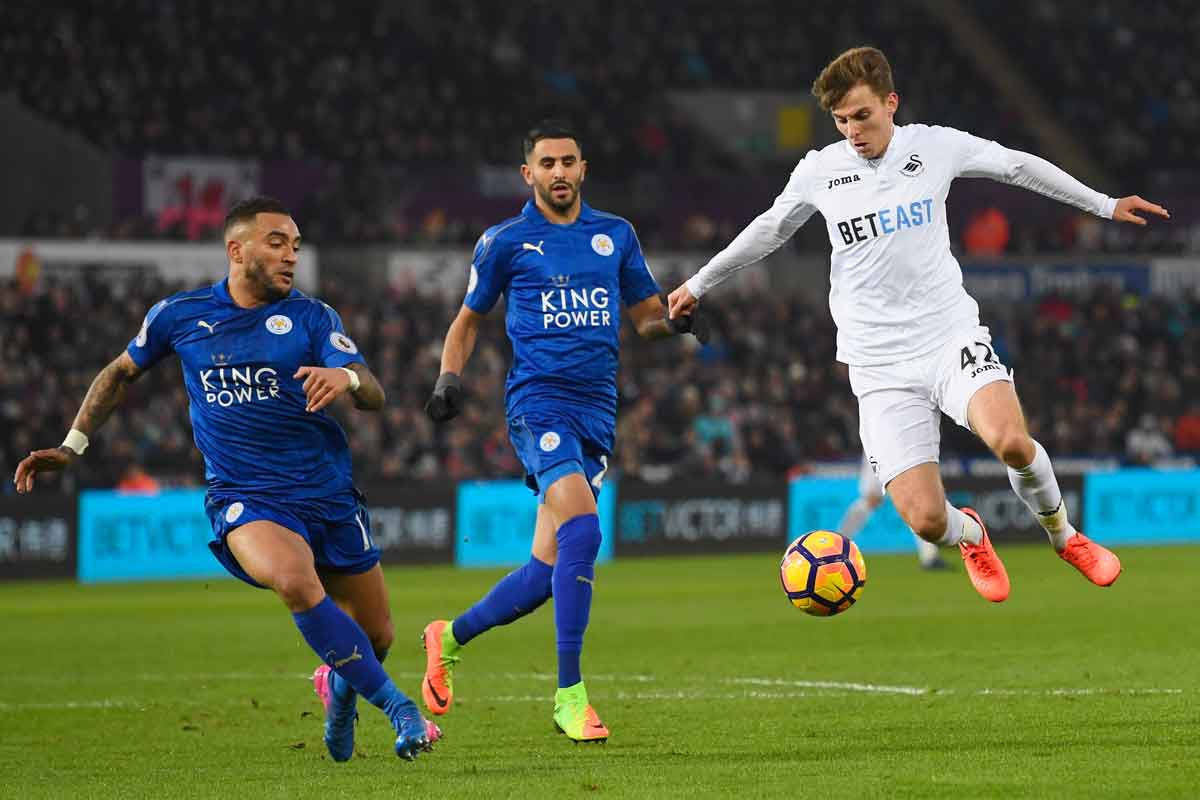 Tom Carroll – Lacked a cutting edge in the final third but can’t fault his enthusiasm. 6

Nathan Dyer – His inclusion against his former club was somewhat surprising, but he only lasted five minutes and was replaced by Wayne Routledge after injuring his ankle. N/A

Fernando Llorente – Didn’t always have first-rate service but remained a muscular presence up front and showed some good build-up play at times. 6

Gylfi Sigurdsson – Had early penalty appeal for handball against Wes Morgan waved away. Hosts found it difficult to find him space but he still slid a perfectly-weighted ball through to Olsson for the goal. 7

Wayne Routledge – Forced Schmeichel to make the first save of the game with a sliced volley after coming on. Was subbed off again before the end, but he’d put in a big shift. 6

Kasper Schmeichel – Beaten at his near post for Olsson’s second but it was a powerful shot, and the Danish keeper would have been excused for questioning the defending in front of him. 6

Danny Simpson – Was nowhere to be seen when the second goal came from his side but did stray from his position to cover on more than one occasion, rather admirably. 6 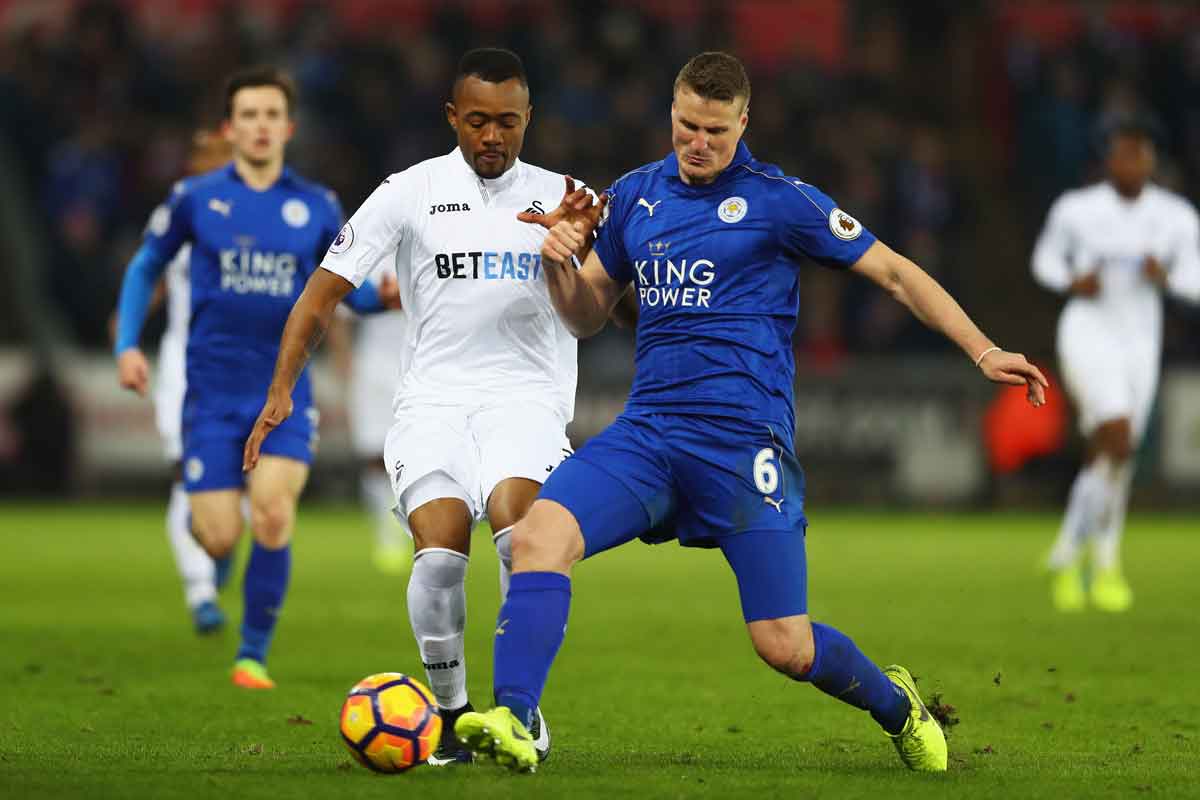 READ MORE: Analysing What Exactly Is Going Wrong For Leicester This Season

Robert Huth – Gave away the free-kick that led to the goal, with his resulting defensive header also going straight to Fernandez. 5

Wes Morgan – Looked exposed once again. Will Ranieri drop his captain after another unconvincing performance? 5

Christian Fuchs – The Austrian international hasn’t been at his best recently and he was sloppy in possession before being hooked at half-time. 4

Danny Drinkwater – Had to make up for Mahrez’s lack of defensive vigilance and often shut down Swansea’s attacks down the left. 5 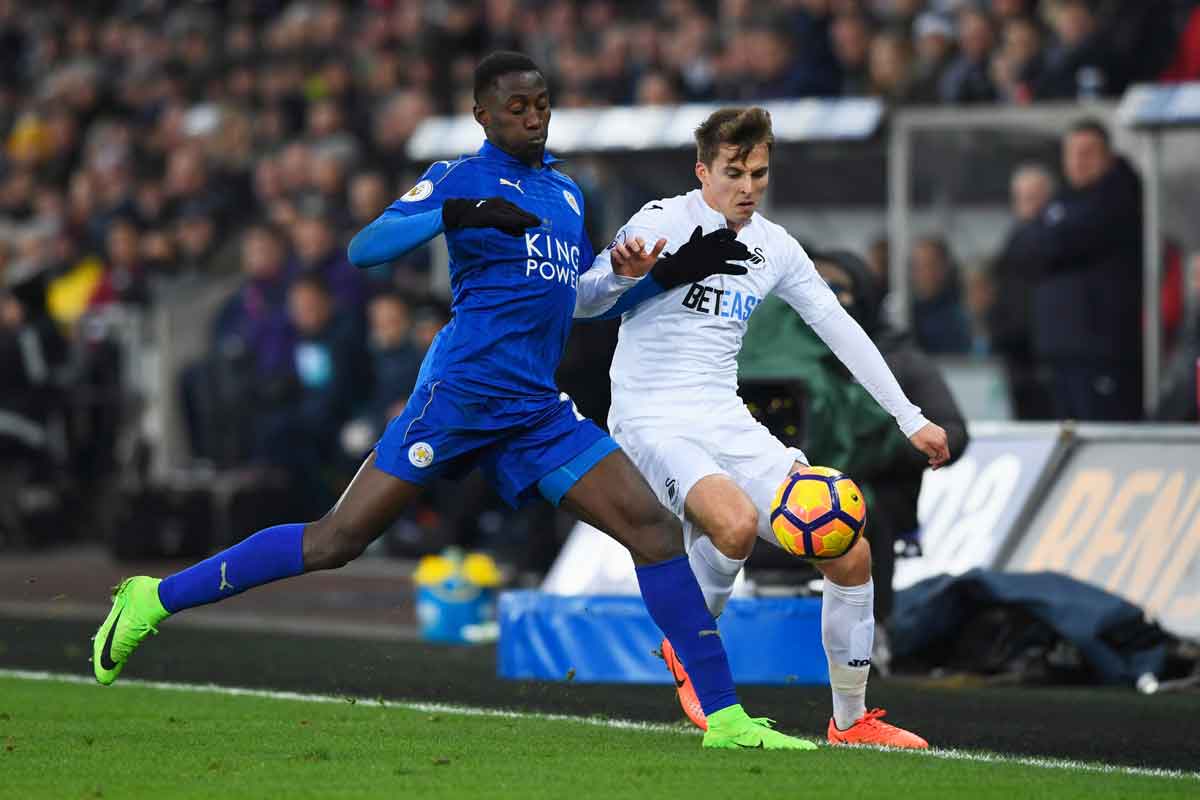 Wilfred Ndidi – It’s too much to expect him to fill the Kante-shaped hole in Leicester’s midfield but, given time, he should develop into a classy holding midfielder. Wasn’t able to offer sufficient cover for the back-four today though and didn’t win any friends with a couple of wild, speculative shots from distance. 5

Riyad Mahrez – Played an excellent through ball to Vardy that released the striker early on and cut Swansea open to play in Slimani. 6

Marc Albrighton – Caught on his heels when Olsson stormed past him to run in behind and score. Turned out to be his final involvement as he was subbed at half-time. 5

Jamie Vardy – Doesn’t look on song with Mahrez anymore, and was largely ineffective in the final third as a result. His one genuine chance resulted in a horribly skewed shot after being played in by Slimani. 5

There are few clubs in the country where things change as quickly as they do at Arsenal. The Gunners have a penchant for peaks and...