Nigeria’s NPFL resumes this weekend and Sunshine Stars will host Niger Tornadoes in Round 33 of the 2021/22 season on Sunday 12th June. We have the details for the league fixture in this post. Our match preview also entails the best free tips, odds and more match details. Read on to place your bet.

A 1-0 narrow win for Niger Tornadoes in the reverse game gives the visitors an impetus ahead of this trip. The visitors also bagged a narrow 2-1 win against Enyimba the last time out and hope to build on the same for a positive result. However, Sunshine Stars will be hard to beat after losing only once (away from home) in the last five games. The visitors have not lost in their last 11 home games. Our best two free picks for the NPFL game are:

A narrow win for Sunshine Stars

Sunshine Stars have lost only once at home while Niger Tornadoes is yet to win on the road. Home advantage should equally play significance on matchday. Also, noting that Tornadoes have scored only 5 goals in 17 trips while Sunshine netted 23 in 16 home games, we don’t think the visitors have a chance of winning the game.

Four goals scored by Sunshine Stars in the last five and only three netted by Tornadoes in as many previous NPFL games are why we expect another low scoring encounter. Notably, the last four meetings between these teams ended with a similar outcome of 1-0.

Place your bet on the highest odds for Sunshine Stars vs Niger Tornadoes in the table below. Also, check out how these teams fared in recent games and how they compare in previous encounters.

Eight encounters have previously taken place between Sunshine Stars and Niger Tornadoes. Three of those duels ended in favour of Sunshine Stars while Niger Tornadoes bagged four wins. Only one draw has been recorded between these teams. However, based on how these teams have performed this season, we don’t expect a draw unless something dramatic happens. Lack of away win after 17 trips of 4 draws and 13 losses explains our prediction for a home win. Even more noteworthy is the fact that after all those trips, Niger Tornadoes have scored only 5 goals and leaked 23 in the process.

Defeats in the last four trips with no goals scored further puts the Tornadoes in a tight spot ahead of this trip. On the other hand, Sunshine Stars won their last two home games, scoring four and leaking one goal.

Moreover, the hosts have lost just one home game this season, a record that makes them the fifth-best home team after hosting teams 16 times. Twelve home wins and three draws is a competitive stat, so backing the hosts to be on the front foot here is a good pick. 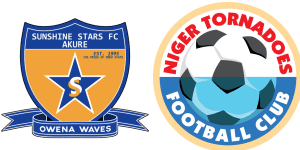 Which stadium will be the match venue?

The venue for the game is Akure Township Stadium in Akure, Nigeria.

What is the set kick off time?

Sunshine Stars vs Niger Tornadoes will begin at 18:00 GMT+3

How many goals did each score in the last five games?