Odds not yet avaiable

Sunshine stars line up against Katsina United in a bid to turn around its poor form in this Saturday 28th May afternoon encounter. We have insightful information on this game to help you make the best betting decisions. Read on for more.

Sunshine is looking for a first win in six attempts when it hosts Katsina United, which avoided defeat in three of its recent five matches. Below are our top predictions:

Sunshine Stars to get back to winning ways

Sunshine Stars had won seven consecutive home matches before failing to win the last two matches in front of its home fans. This is an ideal fixture for the hosts to turn back to their winning ways because its Saturday visitors have not avoided defeat in their last four away matches. Sunshine has been difficult to beat in front of the home fans due to a steady defensive display; it kept five consecutive clean sheets.

Seven of the last ten meetings between these teams produced fewer than three goals. Sunshine's last five home games produced a total of three goals. The hosts have resorted to a defensive display that limits the number of goals conceded. However, this has resulted in fewer points because the team concentrates on preventing others from scoring only to realise that they also failed to hit the back of the net.

Home teams have been performing well in this fixture since 2012. Will the trend continue when Sunshine hosts Katsina on Saturday?

This game comes at the perfect time for the hosts to get revenge because Katsina has dominated over them for a long. GbengaOgunbote, the Sunshine coach knows that he has to select the best arsenals going into this encounter to cement a top-half table finish this season. The host boasts of a good home record – eleven wins this season with only two losses. Coming up against a team with the second-worst away record – zero wins in fourteen means the hosts have the advantage to get the work done on Saturday. We predict a slim home win when these teams meet on Saturday.

Katsina’s push for top-flight participation in next season's NPLF will be tested again on Saturday when it lines up against the Sunshine Stars arsenals. There is hope for the visitors to make a statement over the weekend because they avoided defeat in three of their recent five matches. Besides, the visitors have won six meetings against their Saturday hosts. However, there is a concern with Katsina’s away form – they failed to win a single match in their recent five travels. This will be a tough call for the visitors because they are going up against a team that is yet to lose a home match in ten games. 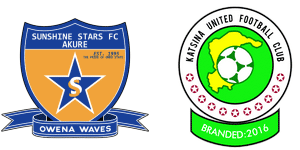 What is the kick-off for the upcoming Sunshine Stars vs Katsina United?

Which team has dominated the Sunshine Stars vs Katsina United encounter?

Katsina has dominated the Sunshine Stars vs Katsina United fixture since 2012.

Which team won the reverse match in Sunshine Stars vs Katsina United encounter?

Katsina won the reverse fixture with a 1-0 scoreline.