Here it is, the biggest game in League One to determine who wins promotion to England's second tier. Who will get the job done? Find out with our Sunderland vs Wycombe match preview with free tips, predictions and odds mentioned along the way.

Black Cats to roar into the Championship

When you're talking about a playoff final it's pretty natural that both sides are in decent form. That said, Sunderland are in marginally better form and we fancy them to edge the game inside 90 minutes. Sunderland have won three and drawn two of their last five games whilst Wycombe have won three, drawn one and lost one in the same period. The real clincher for our prediction though is in the head to head record; Sunderland have won two of the last three meetings and have lost just one of the last six.

Both of these teams have gone under 2.5 goals in four of their respective last five matches. Despite that we are predicting the playoff final to see at least three goals. In some ways, this is playing the value of the betting odds but there is some statistical evidence to support such a tip too. The last three head to head clashes between Sunderland and Wycombe have gone north of the 2.5 mark with a game average of 4.7 goals.

Here are the key stats & form guide for Sunderland vs Wycombe

A Wembley showdown with a Championship place at stake

There are some big games taking place in the football calendar this weekend but few will come bigger than this one and, that's certainly true for the fans of Sunderland and Wycombe. Come the end, one set of fans will be ecstatic, the other will be devastated but what way round will it be?

Sunderland are the biggest club in League One and now they are just one game away from moving back towards where they belong. They didn't lose to Wycombe in the regular season; can they avoid defeat again here?

Wycombe felt hard done by when they were relegated from the Championship last season owing to the fact Derby were granted a stay of execution. It would be extra sweet to pass the Rams on their way down. To do that, they need to find a way to beat Sunderland; they've not done that in three years!

A quickfire FAQ on Sunderland vs Wycombe 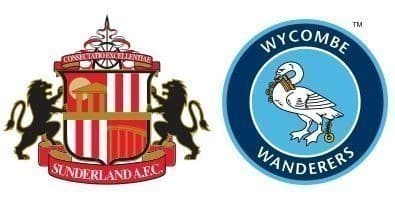