There isn't masses between Sunderland and Oxford in the League One standings but the form book tells you that Oxford will do well to leave the Stadium of Light with a point. The Black Cats, who edged out Bristol Rovers on Saturday, have won four of their last five at home. By contrast, Oxford have managed just a solitary win in their last five trips away.

Despite these two sides sitting reasonably pretty in the table, neither serve up free scoring affairs on a regular basis. Sunderland's last five matches have seen just eight goals with none involving more than two goals. Oxford's don't see much more goal action; they've only gone over 2.5 in two of their last five – both when they were the home side. Throw in the fact that none of their head-to-head games this century have seen more than two goals and you should be in with a good shout.

Sunderland to win to nil

We've already backed Sunderland to run out winners. Now, we make the prediction that they'll do so without conceding. Why do we suggest this as one of our tips? Well, they've conceded just one in their last five home fixtures. With Oxford, they might have won last weekend but they've blanked in their last two away games.

All the stats and odds for Sunderland vs Oxford

The Black Cats to continue march to the title

Sunderland currently top the home form table having taken 13 points from a possible 15. They've conceded just two goals in that time too and now Lee Johnson's men will have their eyes firmly fixed on winning automatic promotion. They face an Oxford side that recorded a confidence boosting win last time out against fourth placed Lincoln; it's not their home form that's been the problem though. They'll be hoping top scorer Matt Taylor, who has three goals in his last five, can help them bag a surprise result.

FAQ about Sunderland vs Oxford 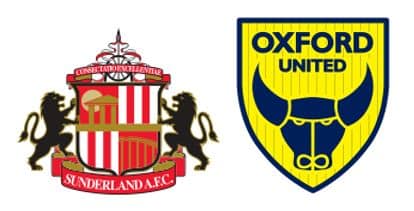