For spells during Sunday’s 2-2 draw with Manchester City at the Emirates, it looked like Arsenal’s season was over, but then equalising goals from Theo Walcott and Shkodran Mustafi won them a point.

On Wednesday, another tough test saw them kept goalless at half-time against West Ham United, but Mesut Özil, Walcott and Olivier Giroud scored the goals to pick up what could be a vital three points.

Arsenal are fifth in the Premier League, four points behind City – showing how crucial that draw could be, and Arsène Wenger still believes a place in the top four is achievable.

“It’s possible of course. We have a game in hand on City, we have players back from injury, we had a strong bench tonight. We have done it before, in more difficult conditions, and we have to try to do it again, yes.” 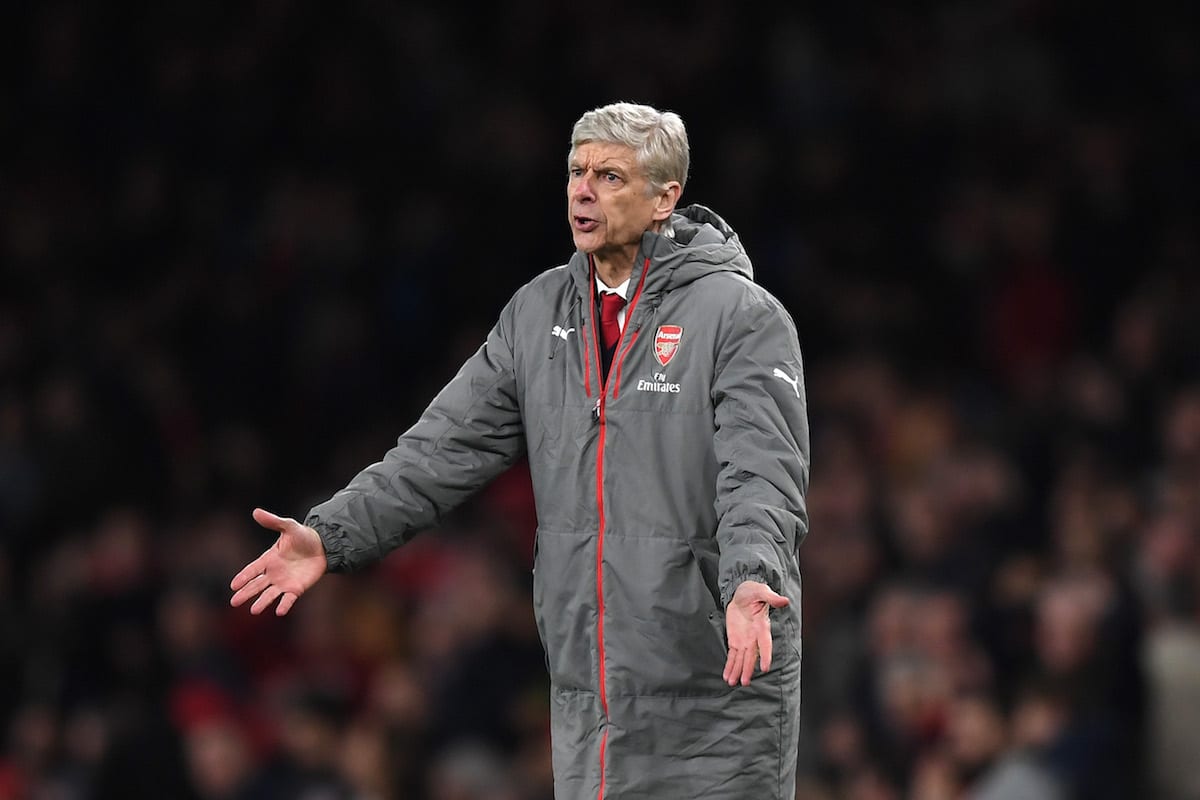 Regardless of where they finish, all the signals out of the Emirates suggests that there will be huge changes this summer. We previously already looked at who would be great summer signings for the Gunners, but let's move a little further forward, and into the midfield.

It’s fair to say questions have been raised over the quality of Wenger’s current midfield options. Yet, Granit Xhaka has put up some excellent numbers this term and the boss was in full praise of Mohamed Elneny after Wednesday’s win, via Arsenal.com:

“He gives us fluency and Elneny is a continuity player who is a generous player and wants to help the team. His attitude is always to help the team and he is always available,” Wenger said. “It’s a quality. He’s quickly available. There are two kinds of availability in midfield. Ones who straight away in a fraction of seconds can understand where he has to go to get the ball and these kind of players.

However, that doesn’t mean they can’t improve and add great strength, plus Francis Coquelin is perhaps one of the weakest defensive midfielders in any club chasing a top four spot. 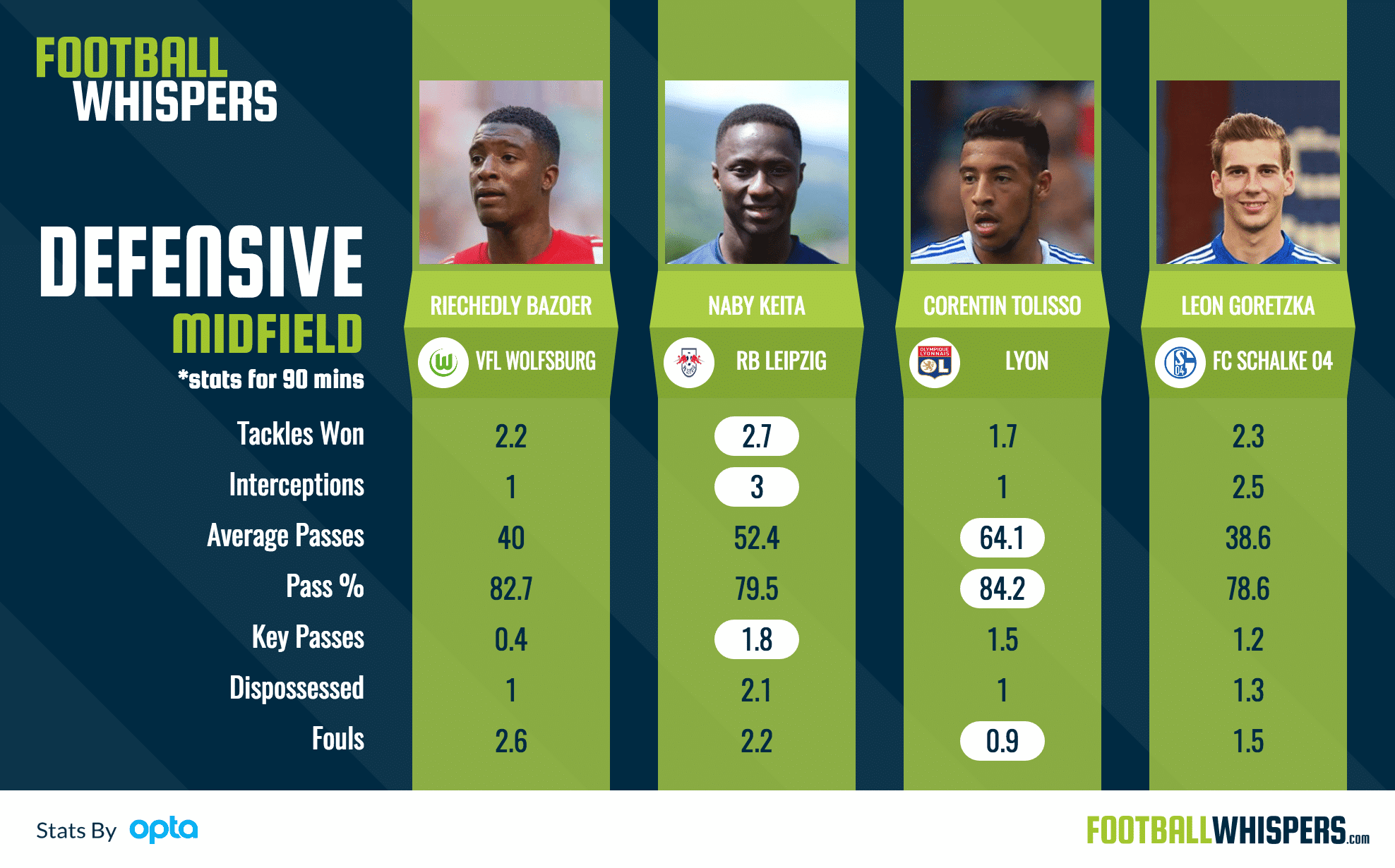 Building the base of the midfield should be the Frenchman’s first priority, it’s a position that Arsenal have struggled with, since Gilberto Silva left North London in 2008. He was a very good option after the reign of Patrick Vieira and Emmanuel Petit, but no one has come close to those three in a long time.

, the former Ajax man would have been a very interesting option in the middle, but once Wolfsburg sold off Julian Draxler to Paris Saint-Germain, they made the Dutch midfielder one of their first signings.

Now, – the 20-year-old has only played 441 minutes and is being touted with a move away from Die Wolfie.

If you are not good enough to command a place in a Bundesliga midfield, he’s not at the level of player that the Gunners should be looking at, although he could be a good pick up in the future. 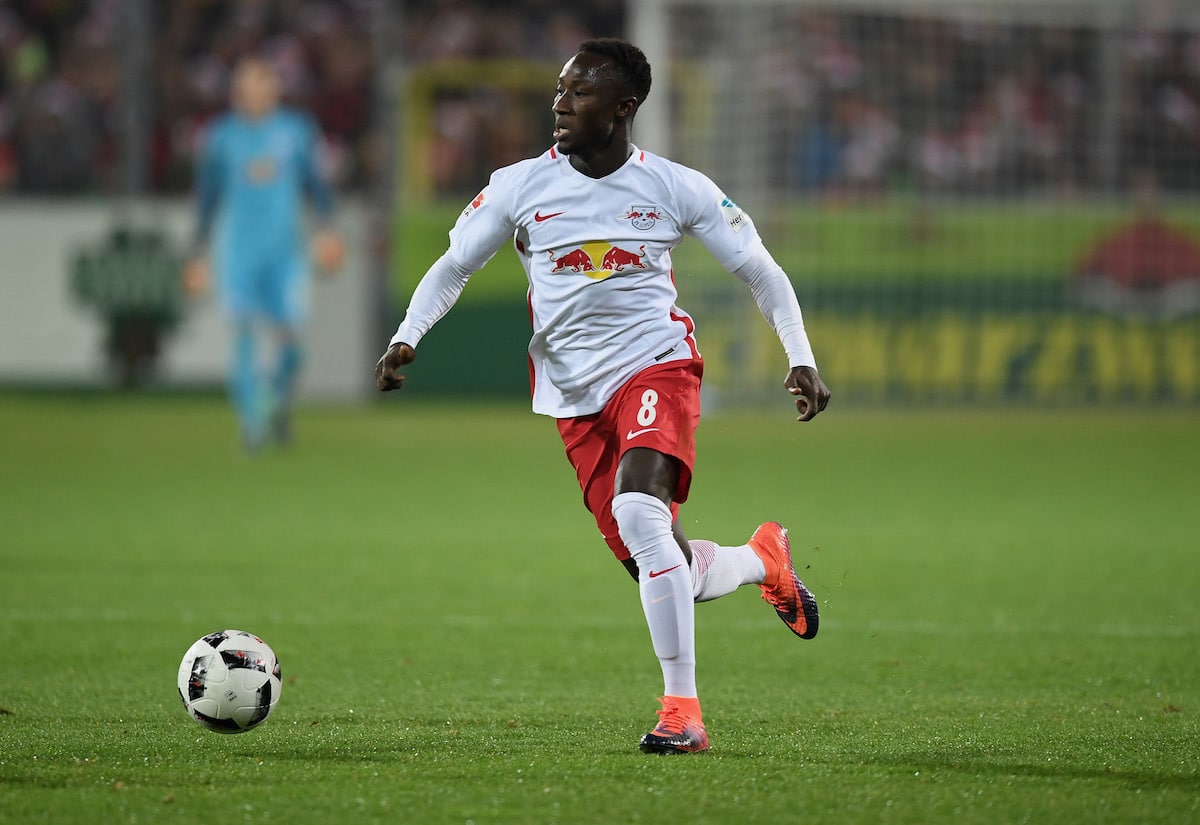 Someone who would be a great signing for Arsenal is RB Leipzig’s Naby Keita – index score 1.0. The 22-year-old Guinean represents what Wenger used to be the master at. Not that he is still an unknown quantity, but Keita is a all-round midfield talent, playing for a smaller club. He has an abundance of Intelligence both off and on the ball.

Bild reported that Arsenal had been to Germany to watch the midfielder, and although he is in talks for a new contract with RB Leipzig, he could still be tempted to England

Don’t be fooled by his size, he’s quick, strong, reads the game very well and breaks up attack after attack. He could be the N’Golo Kante that Wenger missed out on, but with greater attacking instincts.

In 24 games in the Bundesliga this season, he’s scored seven goals and added eight assists.

Leon Goretzka – index score 2.0 – has also been mentioned in terms of a summer move to Arsenal and it’s easy to see why. The 22-year-old German has shown to have a great physical presence in the middle of the park, but also very calm and composed on the ball in the final third. At 6ft 2 inches tall, he’s great in the air and can hold the ball up like a No.9.

Goretzka loves a tackle, and is very good at getting his body in the way of shots and passes. With four goals and two assists in the Bundesliga, he’s shown he can push forward too. Contracted to 2018, he could be the cheapest option here, but it just behind the others in terms of performance. 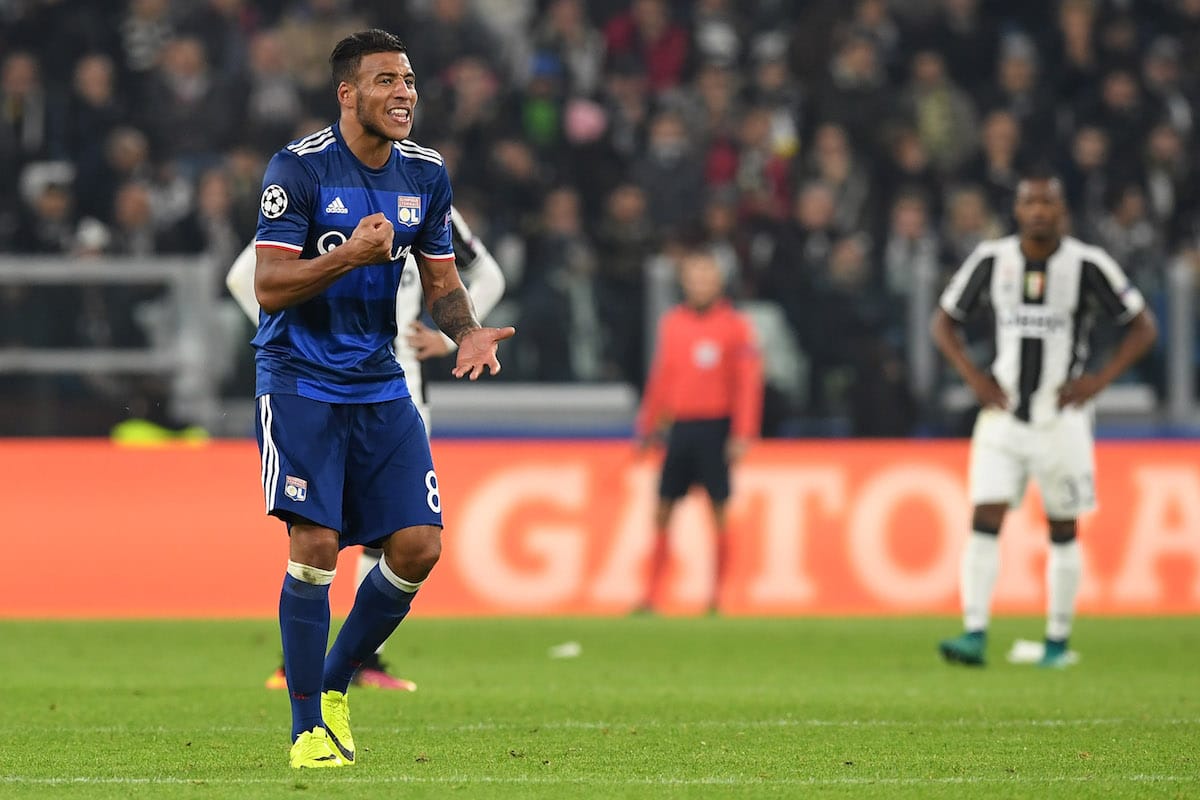 Read More: What Corentin Tolisso would bring to Juventus

Similar to Keita, Olympique Lyonnais, Corentin Tolisso is a midfielder who brings a little bit of everything. He’s a solid, combative defensive midfielder, but the 22-year-old can move further forward and be the metronome and the creator in a midfield two or three. Then, this season, he’s shown his ability to push up the park, playing as a No.10 and support striker when team-mates were injured.

Rather than lose any quality when asked to play in other positions, he steps up and excels, with his performances earning his first cap for France this season.

“Many clubs make me dream like Real Madrid, FC Barcelona and England with teams like Arsenal,” Tolisso said. “I like the Premier League and I think I am well suited to it. It is the league that offers the most competition, it is the most open, the most hard-fought and the most spectacular.”

Contracted till 2020, Lyon understand that one or two of their stars will almost certainly move on in the summer, OL are just making sure they get full value for their money.

In 26 Ligue 1 games , the Lyon youngster has six goals and three assists, so he is capable of adding an attacking threat wherever he lines up.

Best Option: Corentin Tolisso – Gives you everything, would slot into the Arsenal midfield and can play in a multitude of positions.

Add an Attacking Edge to Arsenal 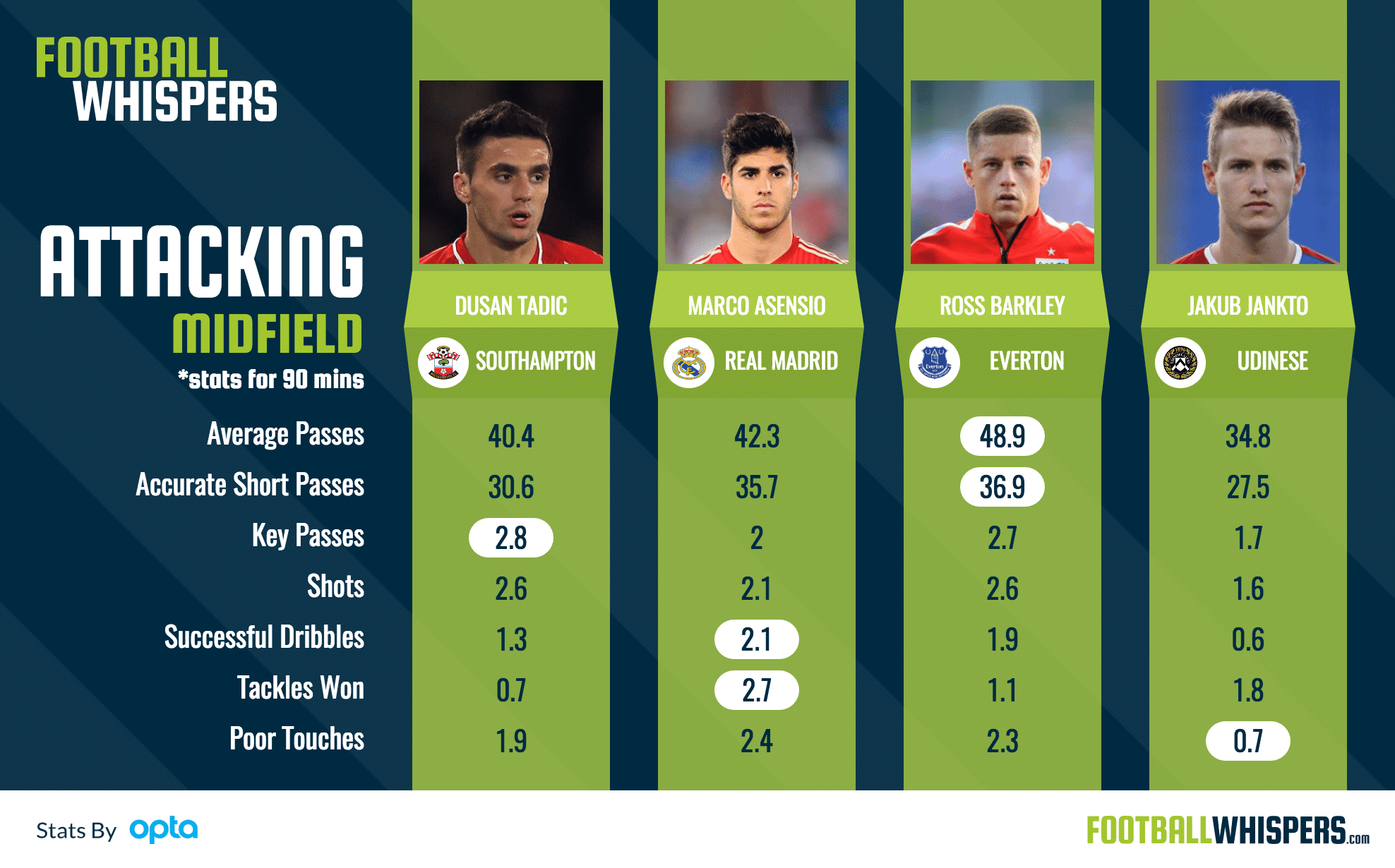 Something that Wenger could really use is someone in the midfield that could also push forward and bridge that gap between the centre of the park and the attacking players. Not quite in the number 10 role, but someone to start a little deeper, play between the lines, either in a midfield three, or ahead of two anchors. 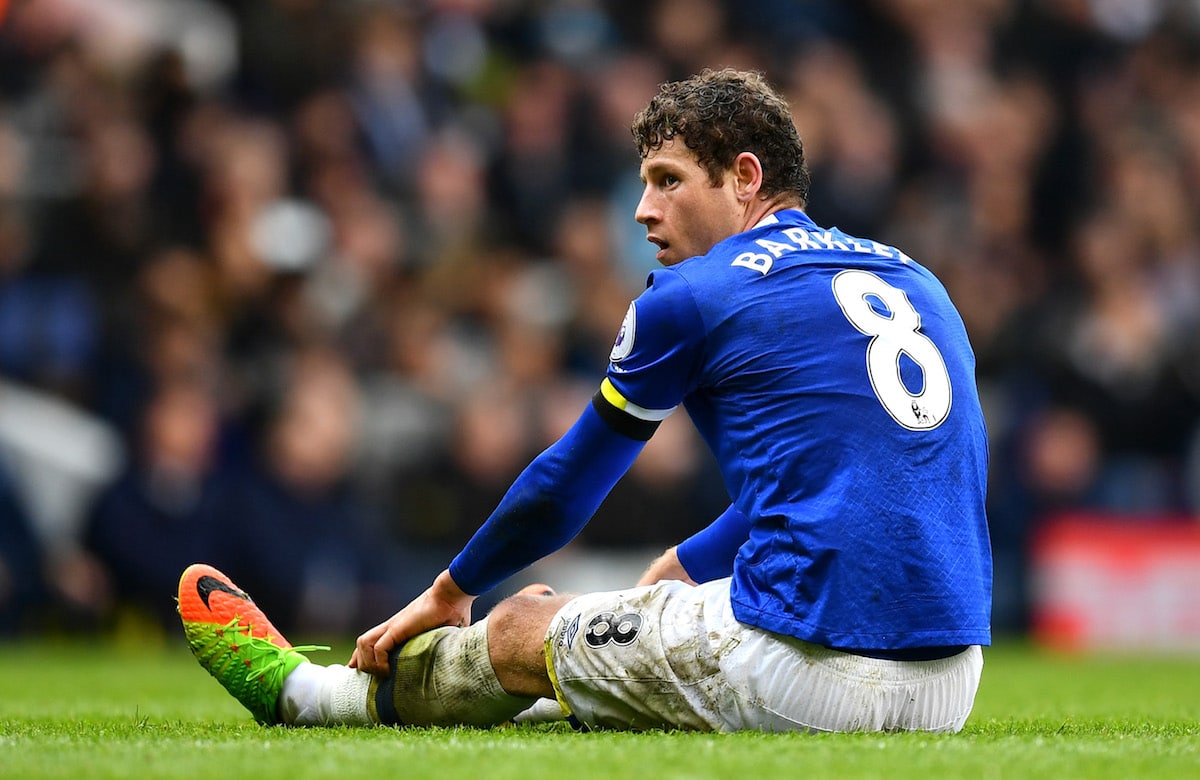 Ross Barkley hasn’t quite kicked on in terms of development since breaking through at Everton. The 23-year-old has been linked with moves to Arsenal and Spurs – index rating 1.6 – and his size, strength and speed make him an excellent option in both midfield and attack.

His current contract runs until 2018, so the Toffees need to think about his future and whether to cash in, plus the play may need a bigger club to fully reach his potential.

Adept at making short passes, the type that could breach a tight defence, he can also dribble past defenders, slip in attackers and fire off shots. He would not only fit into Wenger’s philosophy, but add something a little different.

Marco Asensio has scored 6 goals in Cristiano Ronaldo's absence this season, more than any other player. #HalaMadrid pic.twitter.com/vgLGTqGEk1

Dusan Tadic and Marco Asensio have also been mentioned as summer targets for Arsenal. The Southampton winger turned attacking midfielder, would be more of an offensive option, someone to give Özil more competition, but wouldn’t suit playing a little deeper.

The 21-year-old Spaniard has emerged this season as an excellent young players and although he has only played 588 minutes in the league, he’s scored three times.

Able to play on either wing, Asensio is better placed when picked through the middle, but his statistics suggest he could even be employed a little deeper, link a Xavi-esque general.

Don Balon reported that Arsenal had shown interest – index rating 1.4 – but due to his contract until 2022, he would cost around £40million. He is one for the future, and Real know it.

One to watch, maybe.

One interesting option would be Udinese’s Jakub Jankto. Although a central midfielder who makes 1.8 tackles per 90 minutes, he has shown his attacking instincts and picked up five goals and four assists in Serie A.

The 22-year-old, who made his full international debut for the Czech Republic in March this year, is only contracted until 2019, but is apparently in talks regarding a new deal. Yet, The Sun reported that a deal of around £10million could see him leave Italy.

Gazzetta Dello Sport suggested that the Gunners made a trip to Turin to watch him against Torino – index rating 1.2 – casting an eye on Torino forward Andrea Belotti too. It may be too soon for a move to the Premier League, with the Pozzo family, who own Udinese and Watford, possibly preferring a loan deal to the Hornets to boost his reputation, before a big money move.

Best Option: Ross Barkley – He knows the Premier League, adds a different dimension to the team and could challenge in a number of positions. 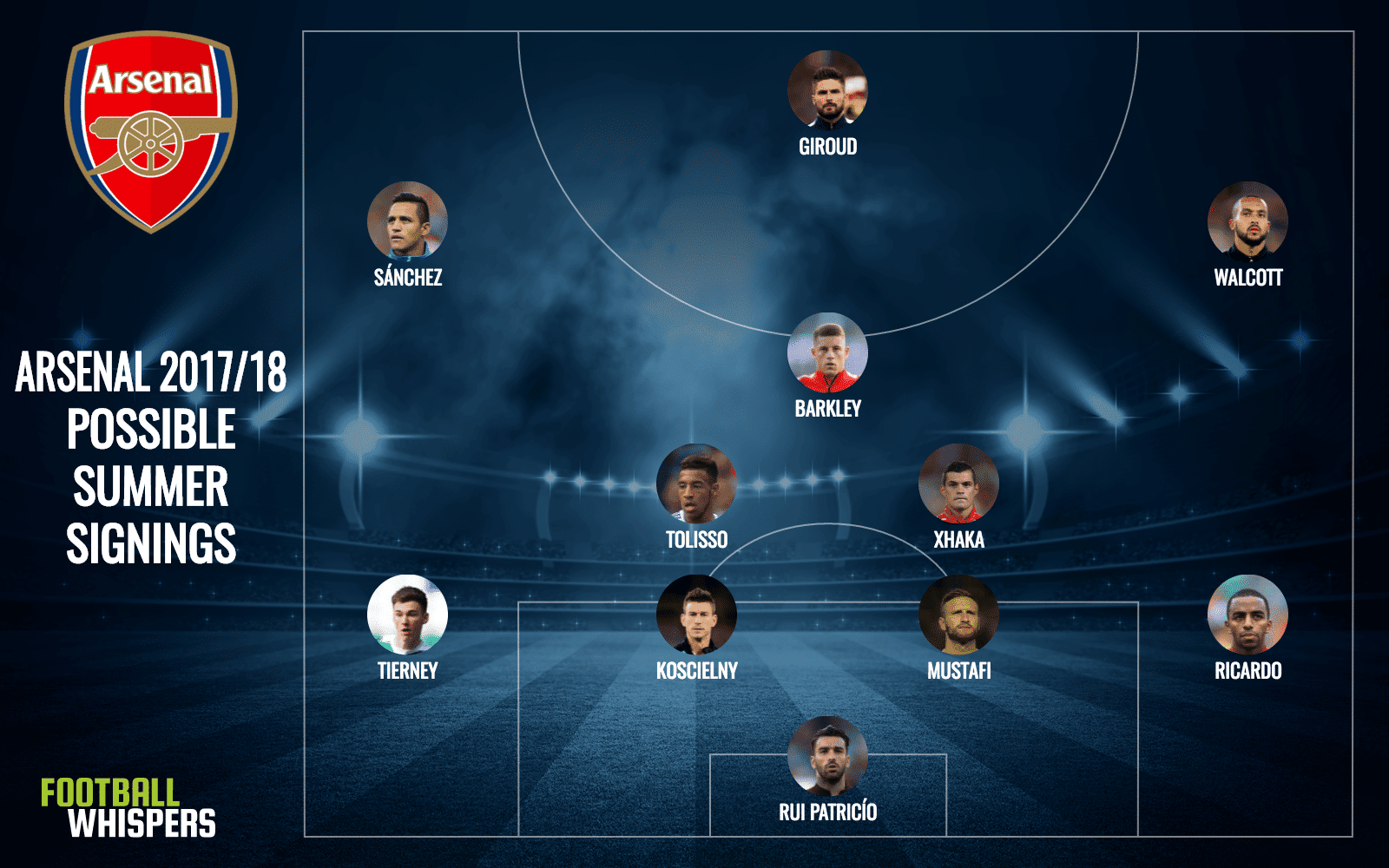 Arsenal are not too far away from challenging for the title, as the other teams strengthen and adapt, Wenger seems to now realise he can’t be left behind. It’s not just about having a strong XI anymore, you need options and adaptability. Previously suggested defensive moves, teamed with a strong midfield and the Gunners would instantly find themselves able to challenge their rivals.