Stade de Marrakech will host the 2022 World Cup qualifying fixture between Sudan and Guinea on Wednesday, October 6. Both teams have yet to win their first game of qualifiers while Guinea Bissau and Morocco have stolen a march over them.

Here are our predictions for Sudan vs Guinea.

Sudan vs Guinea to Win

Even though Guinea have shown better numbers in the recent matches than Sudan, our prediction is for the host to beat the visitors in this match. Sudan lost both of their previous games of the group stage of World Cup Qualifiers while Guinea were held to a draw in their last group stage match. But Sudan will be confident following the last match victory against Guinea, where they backed their rivals playing away from home. Hence, Sudan may find it easier to overcome and take the home advantage in the coming game.

Guinea has found the back of the net five times in the last five matches, while Sudan has scored seven in the same duration. Talking about the past H2Hs, both teams faced each other two times and shared a total of nine goals in this period. Guinea lead in the total but Sudan managed to score two goals in the last H2H which let us predict a total of over 2.5 goals again for this match.

Guinea has been on the scoring side since the last three matches, while Sudan has Yielded goals in four of the last five matches. The host has scored two goals despite the losing result in the last match. Furthermore, both teams hit the net in their previous H2H clash. Based on these scoring tactics of the teams, we believe this match to end with both sides on the score sheet.

Sudan vs Guinea: Check out the best odds and the latest stats

Questions About Sudan vs Guinea 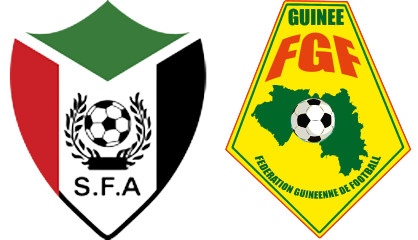 Where is the game being played? Stade de Marrakech.

Which team is the favourite to win? Guinea.