Raheem Sterling has had a stellar season, yet one that might slip under the radar in a campaign dominated by Kevin De Bruyne and Mohamed Salah.

It’s also an increase of 16 goals from last season for Sterling, in a virtually identical number of minutes (2413 so far this season, 2517 last season). In 2016/17 he netted just seven while setting up six.

This is a huge leap, one which shows the 23-year-old is fulfilling the potential he displayed in his break-out seasons at Liverpool.

Sterling's player persona radars from this and last season make it clear his position in Pep Guardiola's side has been tweaked. He is no longer just a wide player who hugs the touchline and looks to create for others.

He’s also been relieved from a degree of the defensive work which he had to do last term, his tackles and interceptions per 90 are down from 1.63 to 0.96.

It may not be much but it’s a further indication of his more advanced role. It also means that when Manchester City win back possession through a high press, he’s more likely to be in a position to take, or create, chances.

A big part of this is down to the addition of Kyle Walker.

While Bacary Sagna – when he played – fulfilled some of the roles of a traditional full-back in terms of maintaining width, he wasn’t as involved in the attacking play as Walker has been.

Guardiola likes his Manchester City side to make the pitch as wide as possible by keeping one member of the team on the opposite touchline to the ball.

With technically superb players who can switch the play accurately, these passes can pull the opponents out of shape as their defence shifts across the pitch. It also allows City’s attackers to drift around in the blind spots of the opposition defenders.

This is all mentioned because this width-preserver was a role that Sterling filled on the right-hand side last season.

This campaign, with a full-back who has the athleticism to maintain a wide position high up the pitch while still being able to recover defensively if needed, Sterling’s had more freedom.

‘Now I am trying to pick my moments'

Interestingly, Sterling’s also been dispossessed less this season than last. Whether this is because the centre of the pitch provides him more options to offload the ball in tight situations or because Sterling’s evolved as a player is hard to tell. 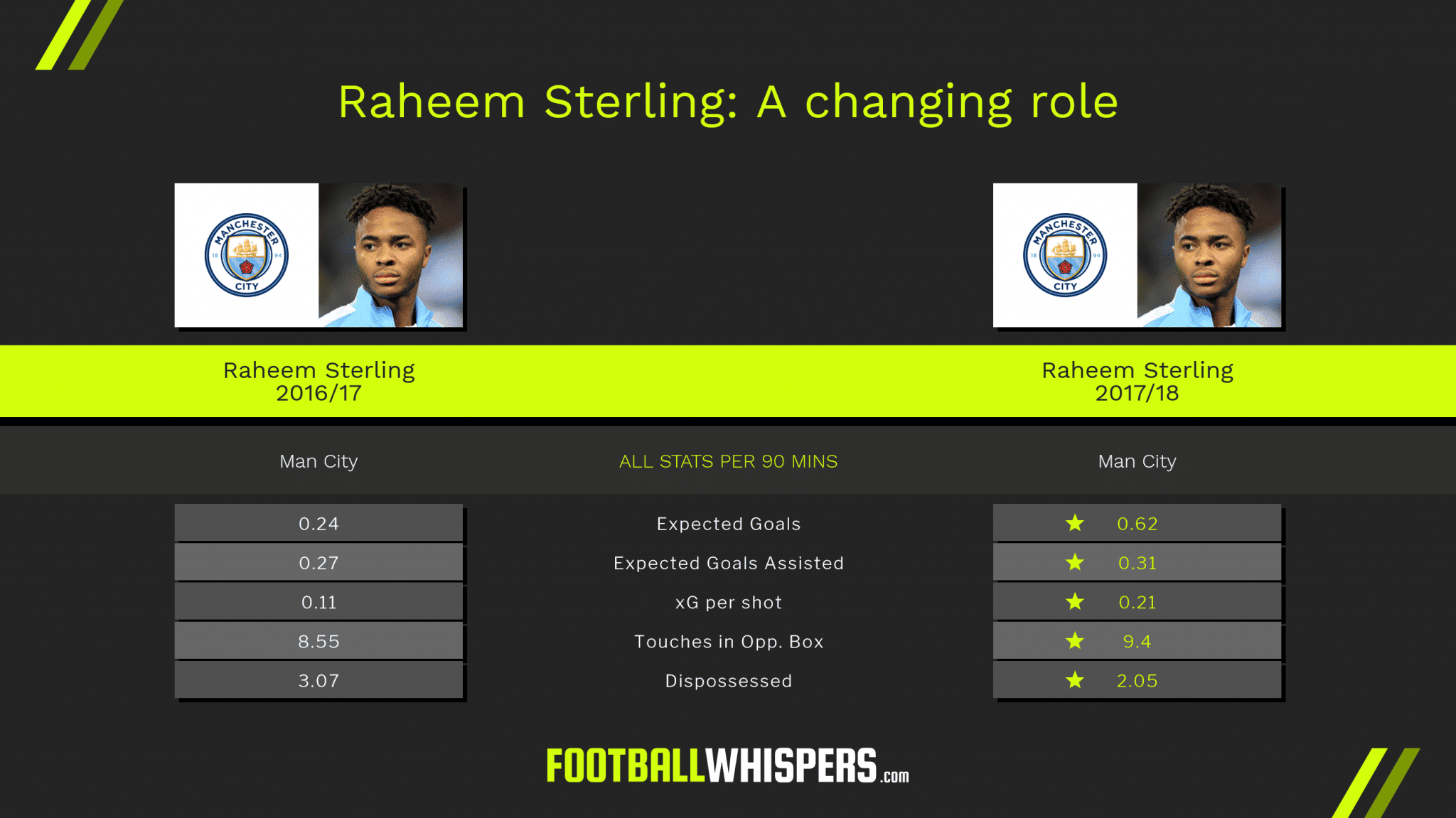 However, something that is clear is that he and Guardiola enjoy working together.

“Sometimes we judge him because ‘he missed that goal’, ‘he missed again that shot’,” said Guardiola earlier this month. “But the amount of actions he creates, the assists, he creates fouls, penalties, because he's so fast and quick, sometimes he is unstoppable in those situations.

“And the most magnificent thing is he is 23 years old, so he is still focused, keeping the desire to get better, as a player. His understanding of the game is global: he's a guy who can create inside, make a movement outside, dribbling, runs in behind.”

“I feel before [Guardiola] I was more raw,” Sterling said in March. The Catalan’s detail-orientated coaching has helped him refine points of his game.

“When I got the ball I wanted to take someone on, beat someone. Now I am trying to pick my moments. If it’s on, it’s on, but if it’s not, then I try to get in the box as much as I can. That’s mainly where I am now.”

Sterling averages 9.4 touches in the opposition box per 90 this season, up from 8.55 in 2016/17. This is the third most in the big five leagues, behind Cristiano Ronaldo and Kylian Mbappé.

The floating role from the right-wing to the second striker that Sterling has performed in this season has served him and his team well. And he's made the leap to a truly elite player.