Stuttgart's poor form continued into a fifth successive week as promoted Bochum managed to hold them to a goalless draw. Their next rivals, Hoffenheim, will not be as polite in their attacks, especially as they arrive on the high of their 3-1 victory over Wolfsburg.

Here are our predictions for Stuttgart vs Hoffenheim.

Die Kraichgauer were beaten 2-0 on their last visit but we are backing them to go one better based on their recent form. Sebastian Hoeness and Hoffenheim arrive following their expert dismantling of the defensively astute Wolfsburg. They are favourites in lieu of Stuttgarts winless woes that stretch to five games in the Bundesliga.

Stuttgart were lucky to return to the Mercedes-Benz Arena with a point after being outshot by Bochum. It was only the second time in seven competitive fixtures that a match involving them finished with an Under 2.5 total goals. With Hoffenheim also engaged in four high scoring affairs in the same period, we expect the meeting in Stuttgart will be finished with Over 2.5 total goals.

The Swabians' goalless draw with Bochum was the only occasion this season where they have kept a clean sheet. Their defence has given way to all and sundry, but the positive aspect in this period is their attack which has only been shut out once. It is a similar story for Hoffenheim, which makes us confident in predicting that both sides will concede in their Bundesliga encounter on October 2. History is also on their side as two of their last three meetings saw both sides score.

Stuttgart vs Hoffenheim: Check out the best odds and the latest stats

Match Preview of Stuttgart vs Hoffenheim: Reds and Matarazzo in dire need of a win

A 5-1 win on opening day showed Stuttgart mean business. The Swabians came close to qualifying for the UEFA club competitions but were edged out in the final weeks. Pellegrino Matarazzo's tactics were working until they weren't. The aforementioned win over Greuther Furth proved to be a false dawn as Stuttgart have not tasted victory since. From being top of the table to being relegated to 13th place has been their journey across six matchdays.

Hoffenheim had gone through a similar experience. They started brightly with a 4-0 dismantling of Augsburg and lost their footing in the run of two draws and an equal amount of losses that followed. However, they overcame their blushes in style, ending Wolfsburg's unbeaten start to the campaign with a 3-1 thrashing. Die Kraichgauer will want to profit from Stuttgart's poor form and should be able to make their superiority count in this meeting.

Questions About Stuttgart vs Hoffenheim 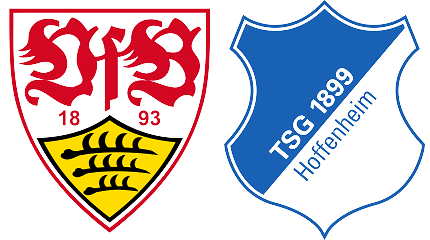 Where is the game being televised? Sky Bundesliga.

Where is the game being played? Mercedes-Benz Arena (Stuttgart).