After the complete dismantling of BFC Dynamo in the DFB Pokal, VfB Stuttgart turns their attention towards SpVgg Greuther Furth. The Schaben will be eagerly awaiting the Bundesliga season opener to set the record straight against the recently promoted outfit following defeat in their last meeting.

With Greuther Furth losing their tie against SV Babelsberg 03 in extra time, it is difficult to back them to secure a result against Stuttgart. The decision is made more difficult after watching the Schwaben in their cup outing. Pellegrino Matarazzo's men were in impressive form, scoring six past BFC Dynamo. History is also on Stuttgart's side as they claimed the three points on offer the last time they hosted Greuther Furth.

There were six different scorers for Stuttgart as they easily overcame the challenge of BFC Dynamo. Hamadi Al Ghaddioui and Borna Sosa troubled the scorers in the first half, while Konstantinos Mavropanos, Mateo Klimowicz, Mohamed Sankoh and Darko Churlinov completed the rout in the second period. Greuther Furth also showed their scoring prowess with goals on either side of the break from Branimir Hrgota and Julian Green. Given their bright start, we expect Stuttgart and Greuther Furth to play a high scoring fixture with at least three goals on offer.

The preseason preparations for Stuttgart and Greuther Furth bore fruit as they scored with relative ease. Taking the lead from their DFB Pokal outings and their respective scoring productivity, we expect both sides to hit the back of the net. While Pellegrino Matarazzo will be pleased with his side keeping a clean sheet, Stefan Leitl still has work to do with his backline. On the night, they conceded three goals in total and will like to keep that number low in their Bundesliga opener.

Stuttgart vs Greuther Furth: Check out the best odds and the latest stats

The Mercedes-Benz Arena would be buzzing with excitement as Stuttgart open the 2021/22 Bundesliga campaign against Greuther Furth. They claimed a 0-6 win over BFC Dynamo and will look to replicate the result on Saturday. Hopes are high as their rivals were knocked out of their DFB Pokal, showing their weakness in delivering on the road.

It gives Stuttgart the chance to improve their home form, which currently stands at three defeats and one victory in league competition. Matters are further complicated by a plethora of injuries to first-team personnel. As many as twelve players are unavailable for selection, giving Pellegrino Matarazzo a selection headache against the Cloverleaves.

Questions About Stuttgart vs Greuther Furth 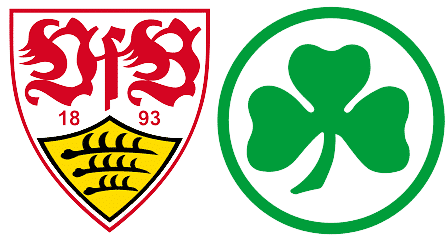 Where is the game being played? Mercedes-Benz Arena (Stuttgart).

Which team is the favourite to win? Stuttgart.