It was a tale of two halves in Seville for Jürgen Klopp‘s Liverpool team. The first half saw them put on a counter-attacking clinic and they went in three goals to the good at half-time.

Though all of the goals didn't arrive from counter-attacking situations,the Reds genuinely looked frightening every single time they had space to exploit. Sadio Mané and Mohamed Salah effortlessly breezed past the Spaniards and even Roberto Firmino, who isn't the quickest, managed to race clear on a number of occasions.

Liverpool weren't as ruthless as they could have been. Both Firmino and Salah spurned chances in the opening 45 minutes but at the time it didn't look like they'd be costly mistakes in the grand scheme of things. Funny how things turn out.

Sevilla made changes at the break with Franco Vázquez replacing one-time Tottenham Hotspur transfer target Steven N'Zonzi. The tide turned. Liverpool couldn't get their foot on the ball, they couldn't get the attacking quartet of Mané, Firmino, Salah and Philippe Coutinho into the game and the home side began to turn the screw.

There was no control and Klopp's men couldn't get out. Sevilla were relentless and their stoppage time equaliser was well deserved.

Alberto Moreno has been slated for his part in the opening two Sevilla goals; Jordan Henderson's lack of leadership has been pointed out and Klopp's reactive nature is once again a topic of discussion.

But, as cliched as it sounds, the scoreline doesn't always tell the whole story. Liverpool may have been coasting at half time but Sevilla had found chinks in their armour long before their tactical change at the break.

In fact, if you dig a little deeper you'll realise Liverpool were playing with fire for the entire 90 minutes.

Over recent weeks Klopp has experimented with different systems. It makes Liverpool unpredictable because teams don't know whether they'll be facing a 4-3-3, a 4-4-2 or a 4-2-4.

More often than not it's the same personnel being used but Klopp tweaks the individual instructions. For example, Joe Gomez may start at right-back but then pushes over to form a back three to give Liverpool more of a solid base.

Philippe Coutinho may start as part of the midfield three but then with Gomez solidifying Liverpool defensively and Moreno pushing into a midfield role Coutinho is allowed to make the attacking trio a quartet. It's hard for the opposition to keep track of what's going on, let a alone combat it.

But, like with all systems, it's about finding the correct balance and against Sevilla Klopp got it wrong.

Against Sevilla it was a 4-3-3 system on paper with Jordan Henderson anchoring the midfield, Gini Wijnaldum playing on the right and Coutinho on the left of the middle three. However, with Liverpool looking to hit the home side on the break, Coutinho would often be on the front foot. He'd essentially vacate his centre-midfield role and it would leave the Reds with a two-man midfield. 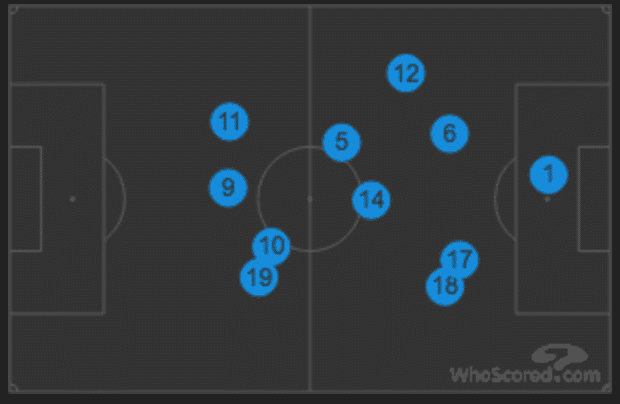 The average touch map, which can be found on whoscored.com, highlights this. Of course, this isn't the best way to view a formation or a system. It only takes into account where the players are when they touch the ball and not where they're positioned when they're defending and the movements they make during transitions.

You can see how Coutinho pushing on had an impact on the balance of the team. The Reds may have won the battle of the counter-attacks in the first half but it's not to say Sevilla didn't have their chances which you can see in the pictures below. 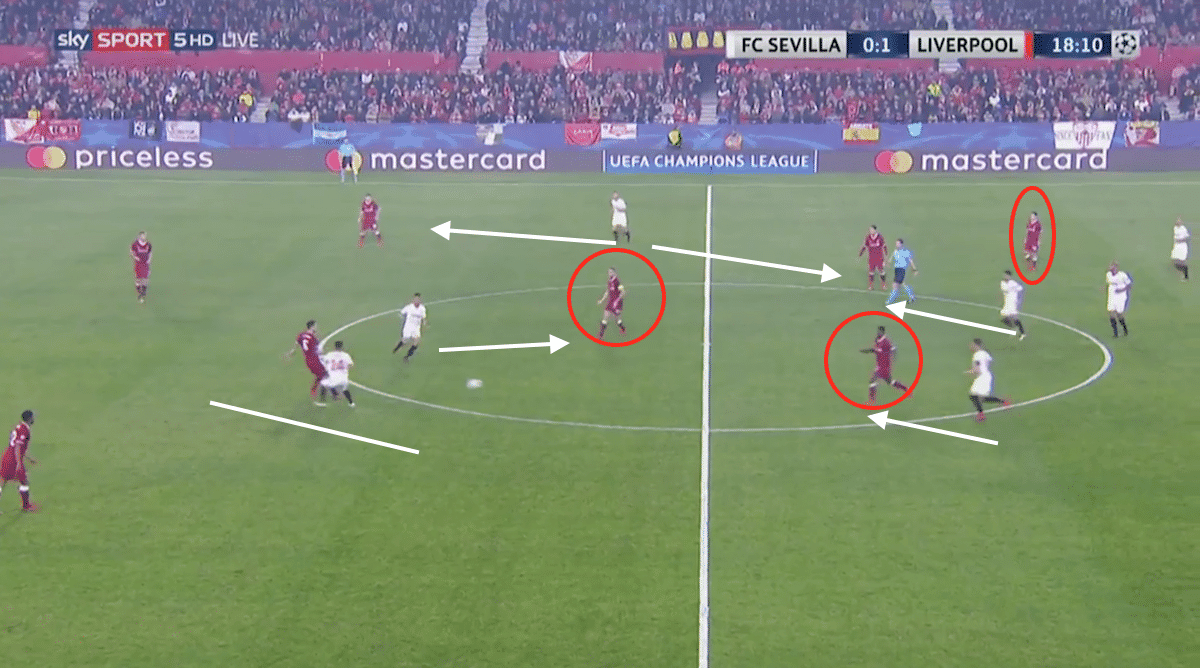 Above you see eight Liverpool players in shot and the midfield three are circled. Dejan Lovren is in possession of the ball but Sevilla are looking to press the centre-back as well as cutting out his passing options.

You see five Sevilla players in good pressing positions. Despite being out numbered they've managed to do a job dictating where the Liverpool No.6 can pass the ball. As soon as the ball leaves his foot and goes in the direction of Wijnaldum the deeper Sevilla players are on their bikes looking to press. 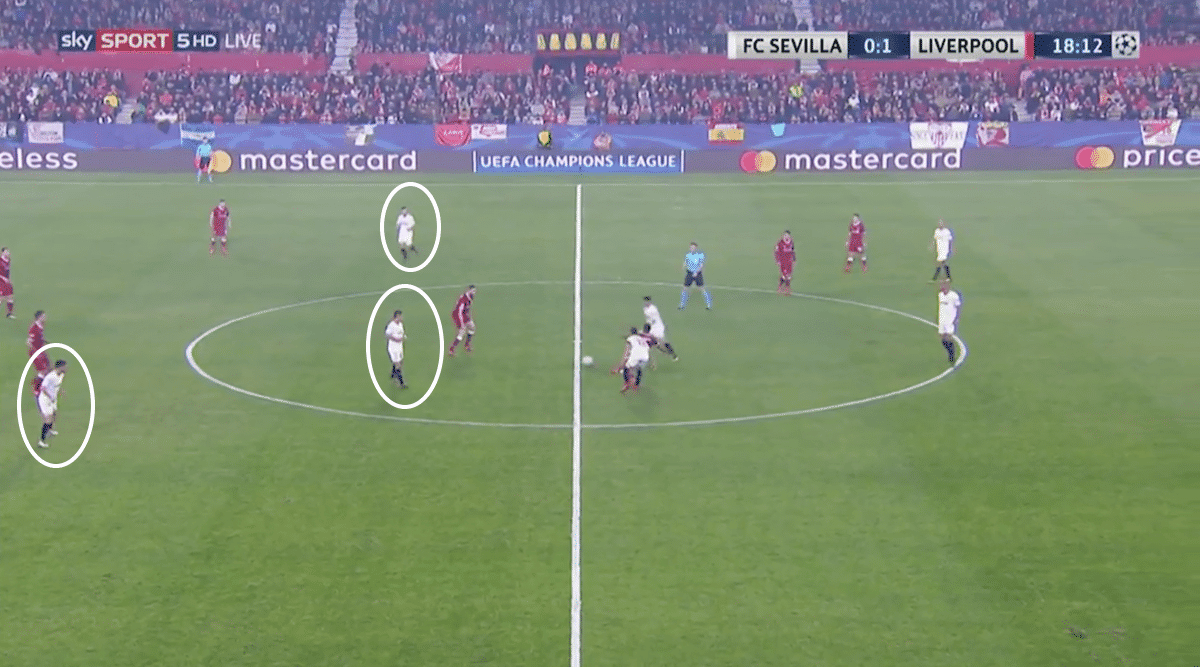 The Dutch midfielder is crowded out and his pass, a weak one into the direction of Henderson, is easily cut out. The Liverpool captain, possibly caught on his heels, is taken out of the game and Sevilla have three players in at the defence.

There's no effort from Coutinho to get back into a defensive position, he's possibly staying where he is on the off chance the Reds can spring a counter. 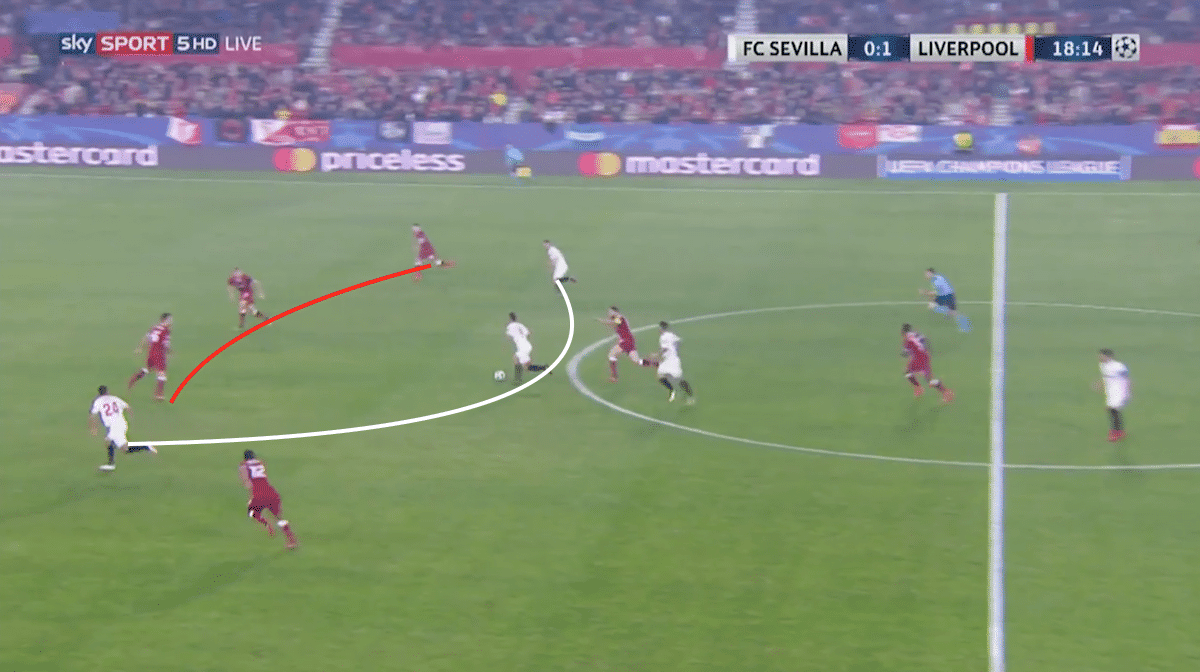 It's effectively a three vs three attack with Gomez caught in an advanced position. Sevilla drive at the Liverpool defence and the ball finds it's way to Nolito (the man positioned between Lovren and the Liverpool right-back).

The former Manchester City man feints to go with his left before cutting back onto his right. This takes a sliding Gomez out of the equation and had it not been for a brilliant Loris Karius save then Sevilla have themselves an equaliser. 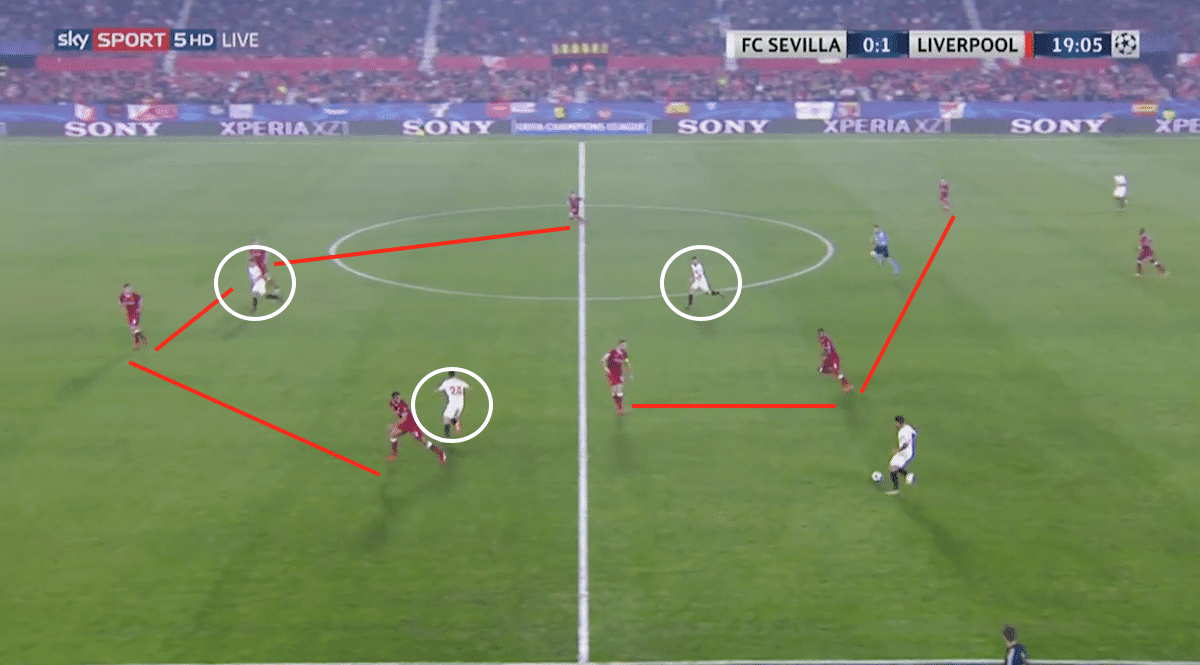 Just under a minute later you see the above situation. Salah's cross is headed clear and the ball finds it's way to the player now in possession. Henderson is forced to shuffle over to cover for the advanced Wijnaldum and it leaves Liverpool exposed in the centre of the pitch.

Moreno is forced to cover the space and this leaves the left-back area vacated. Henderson doesn't shuffle over and Coutinho is still in the Sevilla half. 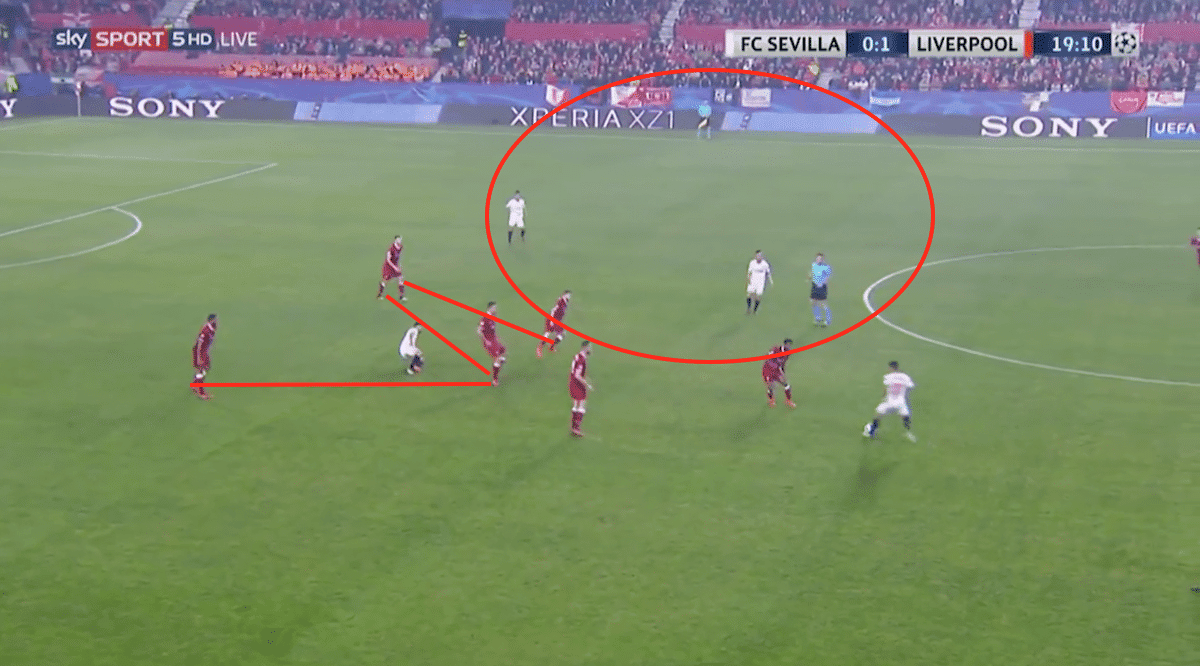 In isolation it appears as though Moreno is out of position but it only happened because he had to cover centrally and had nobody covering him on the left. The ball is eventually worked to the Sevilla man in space on the Liverpool left and he drags his shot wide. It's a lucky escape for Klopp's men but highlighted once again the dangerous game they played in the opening 45 minutes.

Klopp and his players will no doubt learn from the mistakes in Spain. It's up to him to ensure they aren't repeated and Liverpool are able to strike a balance. It's a must if they're to make a mark in the Champions League this season because there are better teams who will punish them and their lack of balance.