When N'Golo Kanté left Leicester City to join Antonio Conte‘s Chelsea revolution, it felt like a killer blow to the Foxes. The Frenchman had been integral to Leicester's title-winning campaign in 2015/16 after signing from Caen, forging a formidable midfield partnership with Danny Drinkwater.

Drinkwater has now moved on to Stamford Bridge, too, but it's was Kanté's absence that was most sorely felt last season, as Claudio Ranieri's reign crumbled with a disastrous defence of their title.

One of Ranieri's final significant acts as Leicester manager, though, was to sign Wilfred Ndidi from Genk for £17million in January. Unfortunately for the Italian tactician, he wasn't around long to see the Nigerian midfielder's progression, getting sacked a month after signing him.

However, while the reign of Ranieri now feels like a distant memory, the remnants of his time in charge are still very much the beating heart of this Leicester side. Wes Morgan has endured as one half of the thou-shall-not pass duo at the heart of defence, Jamie Vardy is still the main provider of goals and Kasper Schmeichel is still very much the first-choice between the sticks.

It is Ndidi, though, that represents a bright future for the Foxes. The 20-year-old has adapted to the climes of English football and has quietly established himself as one of the most effective ball-winning midfielders in the Premier League.

Replacing Kanté – who is surely one of the great footballing bargains of the 21st century – was always going to be an unenviable task. But Ndidi has admirably taken on the mantle.

Firstly, the Nigerian has proven himself to be a worthy successor to Kanté's brand of relentless ball-winning and defensive discipline. This season, Ndidi has made more successful tackles than any other player in the league with 28. That's one more than Kanté, showing how he has matched the Frenchman blow for blow.

Ndidi's tackle success rate is 64 per cent, while he has also made 18 clearances and ten interceptions. His defensive coverage and positional sense in midfield has allowed him to break down countless attacks this season and alleviate pressure on Leicester.

There is no questio Ndidi provides the best shield for Craig Shakespeare's team at the base of midfield. With four tackles and 1.4 interceptions per game, he has a heightened sense of when to intervene and protect the defence. This is crucial to Leicester as, with 39 per cent average possession this season, they currently enjoy the fewest time on the ball. Essentially, they have men behind the ball to absorb pressure, win possession and launch counter-attacks, a style that became synonymous with Ranieri's team.

Ndidi's robust presence was clearly evident during Leicester's 3-2 defeat to Liverpool in September. Although the Foxes lost, Ndidi's WhoScored rating of 7.9 was higher than any other Leicester player. His task was to track elusive Barcelona transfer target Philippe Coutinho and shut down the Brazilian's attempts to unlock Leicester's defence.

In the screenshot below, Ndidi reads an intricate one-two between Coutinho and Roberto Firmino, stopping the former charging into the Leicester penalty area. Ndidi, reacting to Coutinho beating Andy King, slots in behind Firmino to block Coutinho's passage through. 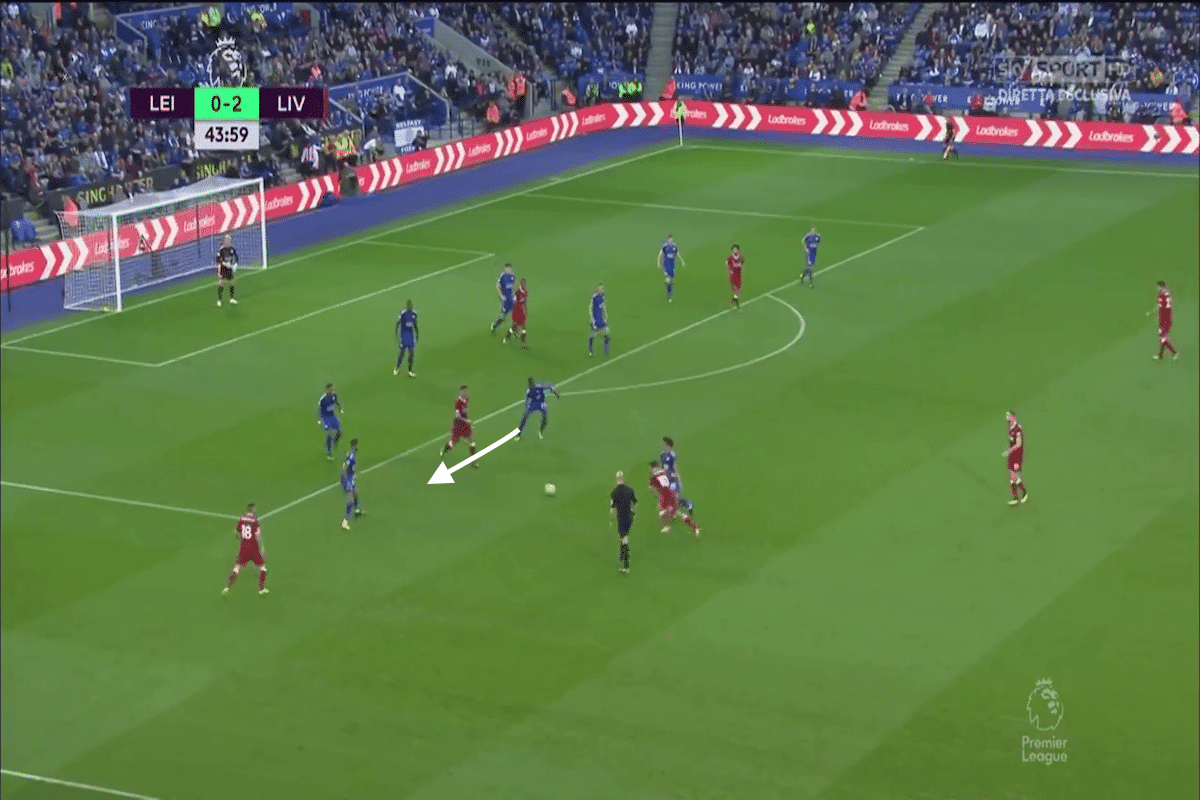 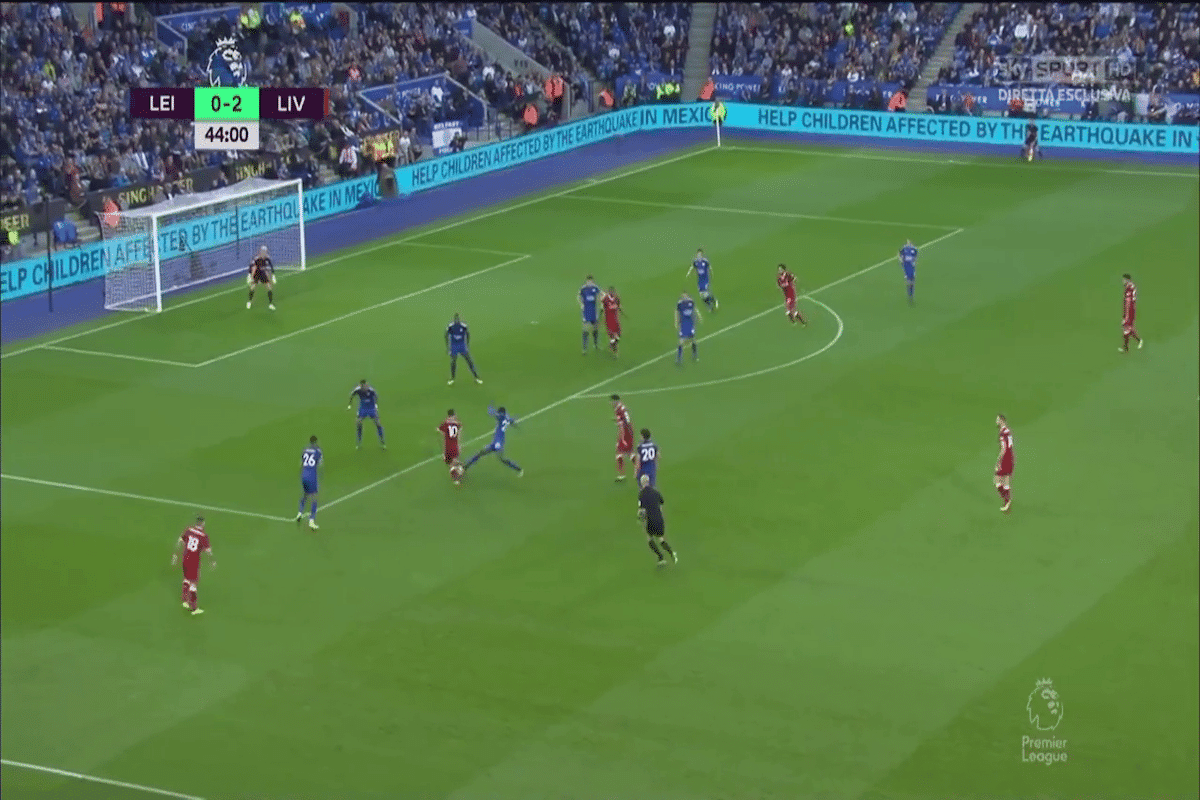 To stop Coutinho – a proficient dribbler of the ball averaging 3.3 dribbles per game – in full-flight so close to the penalty area shows Ndidi's supreme levels of confidence in his own tackling ability. There are not a lot of defensively-minded players who would relish staring down Coutinho with the ball at his feet, but you can clearly see how Ndidi really embraces this side of the game.

In the same game, Ndidi made a crucial interception to stop Georginio Wijnaldum right on the edge of the box. Spotting the Dutchman in space, the Leicester enforcer timed his intervention perfectly to stop Mohamed Salah's pass. Had Ndidi not been alert, it would have been a clear goalscoring opportunity.

As you can see below, the arrow indicates the space left in front of the Leicester defence. Salah, one-on-one against Ben Chilwell, anticipates Wijnaldum's burst, just as Ndidi spots it. The Nigerian accelerates to close off the space and get in front of Wijnaldum. 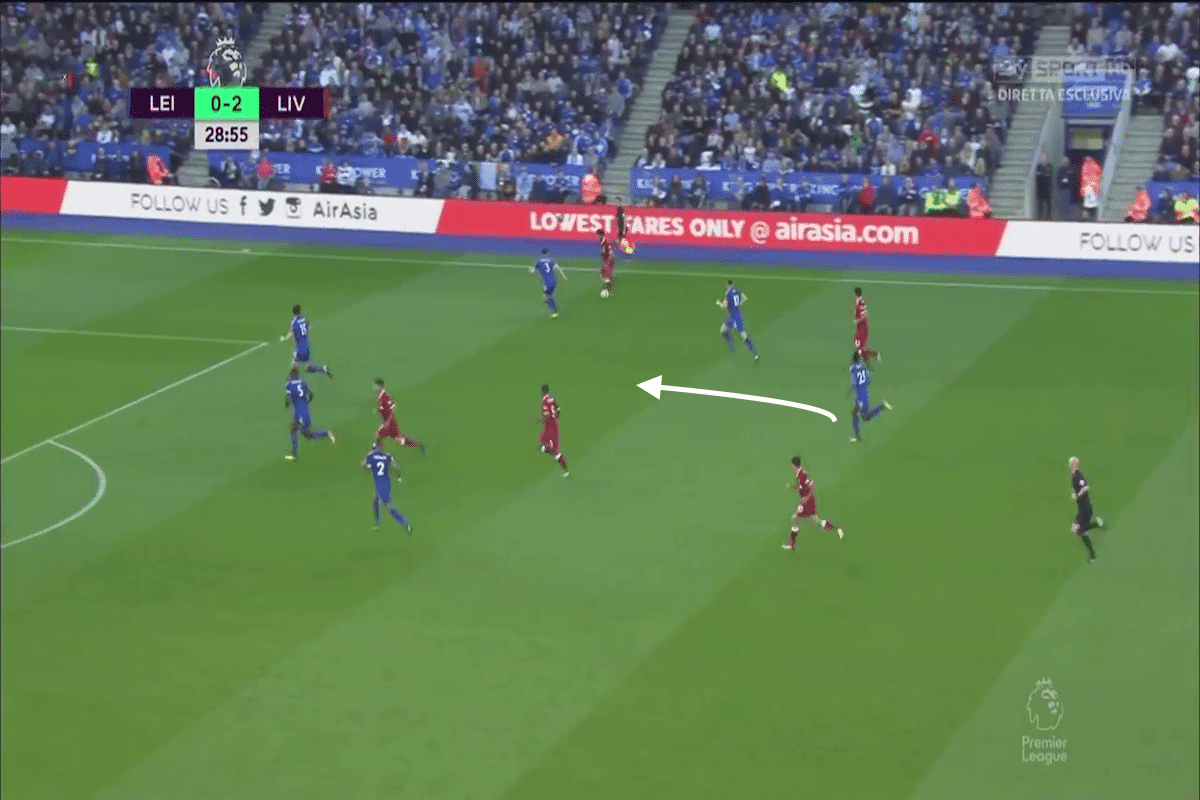 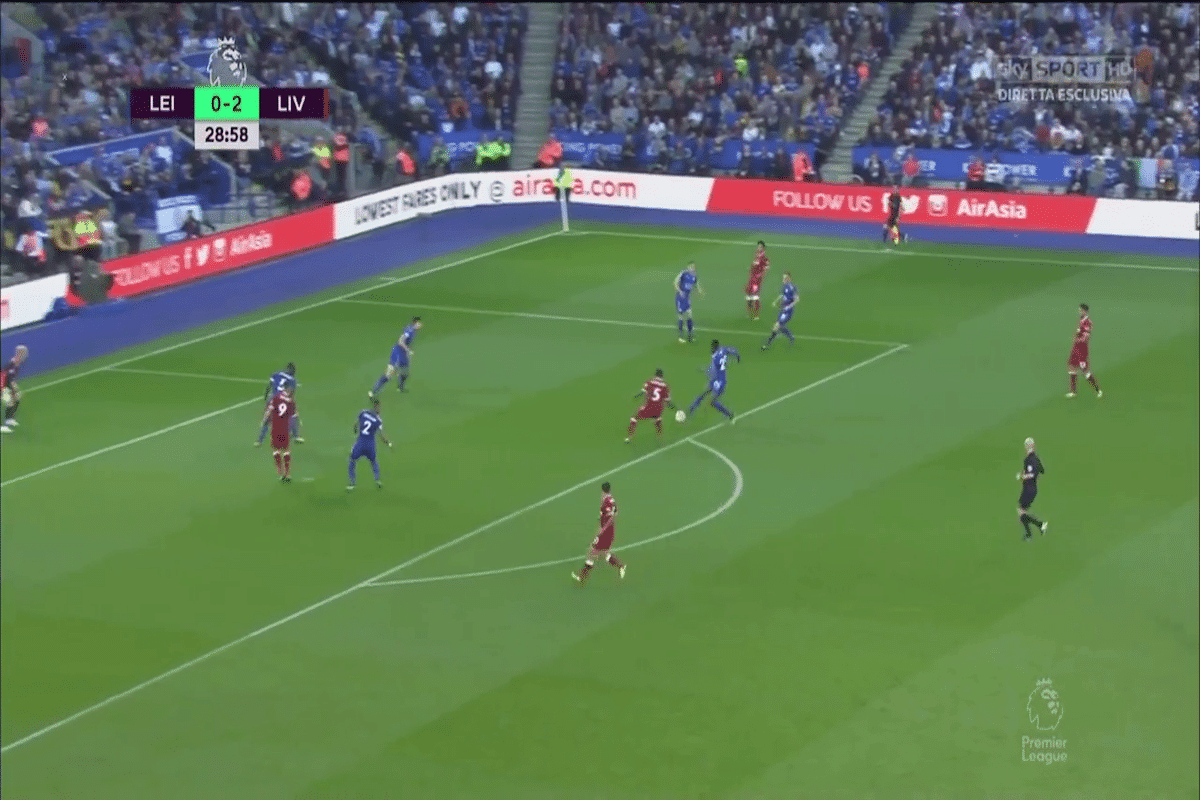 However, it hasn't been plain sailing for Ndidi this season. His stats across the board have taken a dip during Leicester's stuttering start to the season. It was always likely to happen, considering his age and level of experience but, suffice to say, the Foxes need him back to his brilliant best.

One of the main problems with Ndidi this season has been his passing. With only 67 per cent accuracy, the former Genk man simply isn't as clever on the ball as Kanté. The Frenchman, in comparison, averages 84 per cent, while he also makes 1.4 key passes per game.

The difference between Kanté and Ndidi, at this stage, is that the former is more adept at winning the ball, getting his head up and executing a pass. Whereas the Frenchman is refined and composed with the ball at his feet, Ndidi has a tendency to panic and hoof the ball aimlessly up the pitch.

Looking at his passing in the 2-1 defeat to Chelsea, it's clear where he needs to improve. Noticeably, looking at the second screenshot below, several of Ndidi's attempted passes forward failed to reach their intended targets, so it's certainly an area in which he needs to focus. 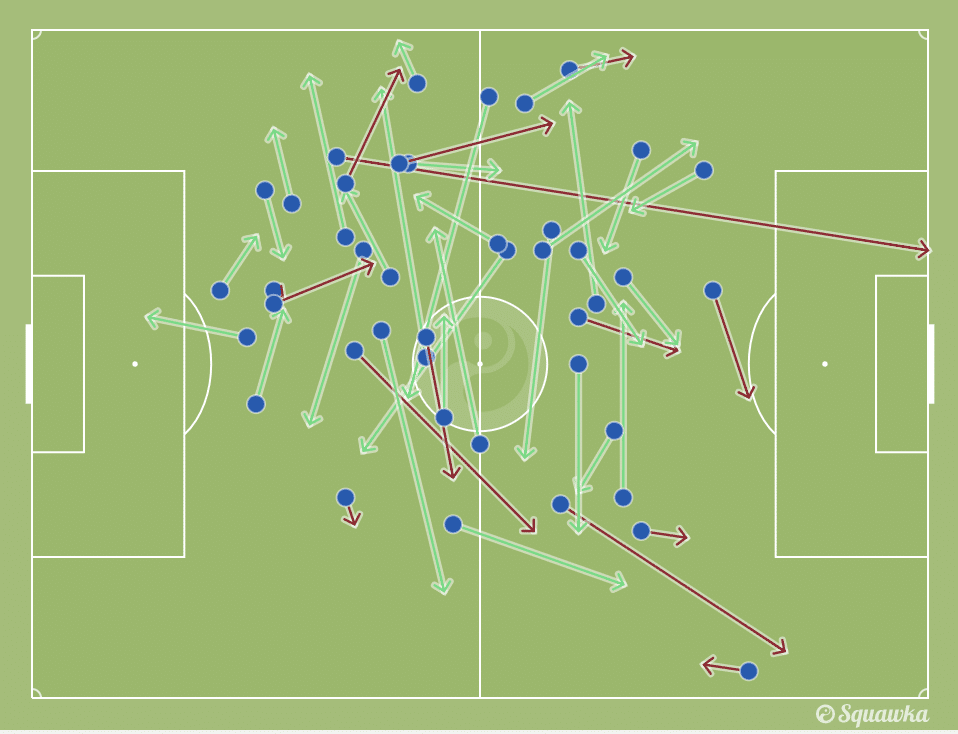 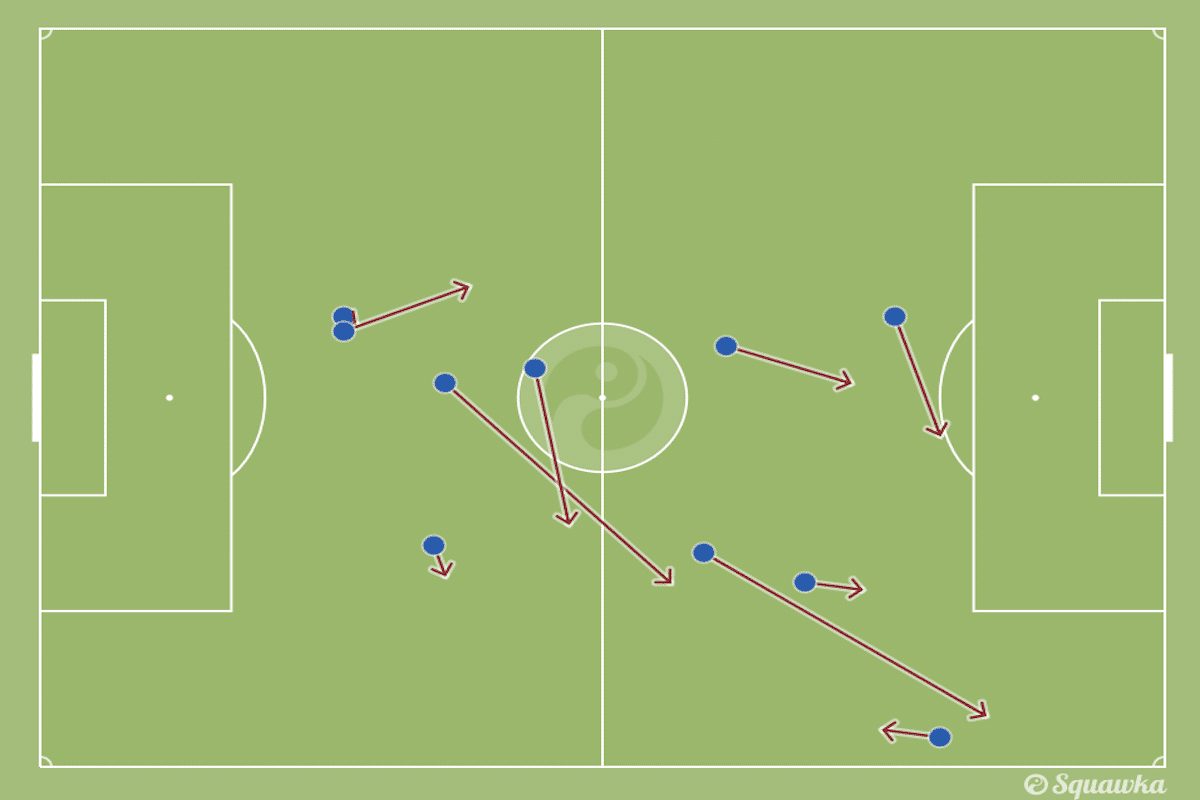 Perhaps the most worrying statistic for Leicester, however, is that Ndidi has been dribbled past more times than any other player this season, having been beaten 20 times.

Of course, while that statistic can be somewhat unreliable as Ndidi attempts more tackles and interceptions than any other Leicester player, it could be argued he needs to temper his approach somewhat.

If Ndidi is lunging into tackles and getting sucked into possession several times in one game, Leicester's defence will be left exposed. Although Ndidi averages four tackles won per game, he attempts 6.9 and is dribbled past 2.9 times.

Kanté, on the other hand, is only dribbled past 0.7 times. He attempts fewer tackles with 4.6, but has a higher win rate. It shows that, while Ndidi is unquestionably a fantastic ball-winner, he has some way to go before he reaches the Ballon d'Or-nominated heights of his esteemed predecessor.

Ndidi is six years Kanté's junior – he has plenty of time to develop and progress in this league. So while he may not be the complete package yet, the exceptional signs of promise he has shown in his nine months in English football suggest he can get there before long.

When Ndidi is at his best, Leicester are a more resolute and organised unit and, considering that they are the above the relegation zone on goal difference only, it's this Ndidi they need for the long road ahead.