When it comes to signing strikers in the Roman Abramovich era, Chelsea don't exactly have the best of track records.

Didier Drogba was an unqualified success. And Diego Costa helped the Blues clinch two Premier League titles. But that is probably it. Several strikers have come in with big reputations and failed to deliver, including Fernando Torres, Andriy Shevchenko and, most recently, Álvaro Morata.

Even the loan signing of Gonzalo Higuaín, one of the most prolific forwards of the decade, hasn't worked out.

The Argentine will return to Juventus this summer when his six-month stint at Stamford Bridge comes to an end. The Blues second-choice striker, Olivier Giroud, may also depart.

Chelsea will have to enter the transfer market – assuming they can of course – to rebuild their attack. Top of their priority list will be a new No.9, a striker can that not only lead the attack but be a reliable source of goals.

The Blues – who could integrate Tammy Abraham next season after an excellent campaign with Aston Villa – have been linked with a number of frontmen in recent weeks, many of whom are unrealistic targets.

We at Football Whispers prefer to be a little more methodical in our approach and have identified five potential candidates the Blues should consider this summer.

The obvious choice. Quite simply, everyone wants Jović. From Barcelona and Real Madrid, Paris Saint-Germain to Bayern Munich. European football's elite have all formed an orderly queue outside of Frankfurt hoping to clinch the signing of the Eintracht star.

Chelsea have been linked, too. And, according to reports earlier this month, were the frontrunners of the Premier League sides interested in the Serbian international.

Those stories have died down somewhat in recent weeks but Jović should remain the striker the Blues push hardest to sign.

At just 21 years old, there are few weaknesses to his game. He is an excellent finisher, as demonstrated throughout the season, and has outperformed his expected goals in the Bundesliga of 12.23 to score 17 times. 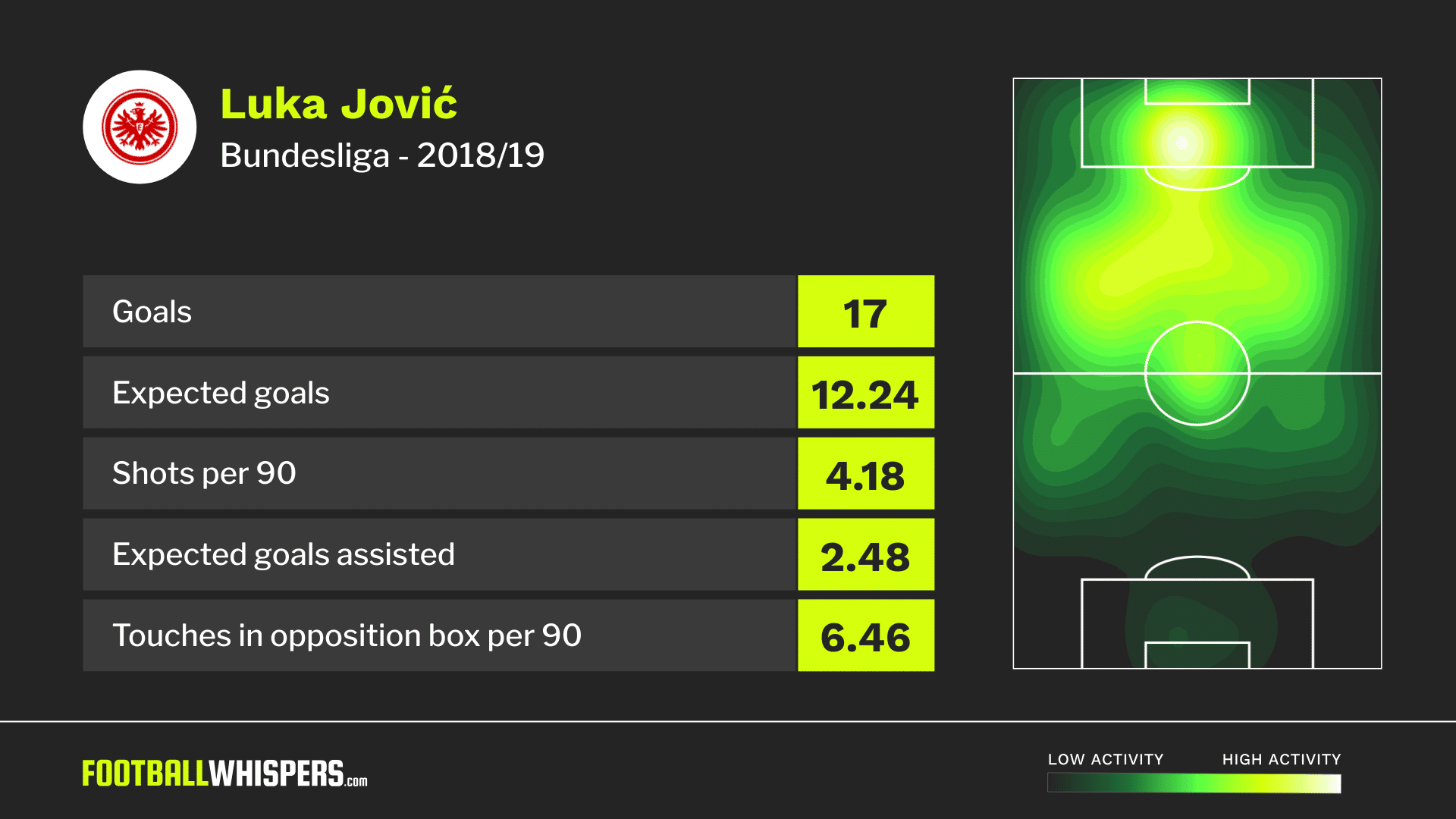 He can also create for his teammates. Jović is inside the top twenty strikers in the German top flight for big chances created per 90 (0.32) and that has enabled him to claim five assists.

His form has tailed off a little in the last two months – he has just two Bundesliga goals since the start of March – but that may simply be a result of the uncertainty over his future.

Eintracht want around £60million for the striker, a fee that has seen Barcelona and Real cool their interest. Chelsea's should remain, though, and they'll have an opportunity to assess Jović at close quarters when they take on the German side in the Europa League semi-final in May.

When the Polish striker joined Napoli in the summer of 2016, he arrived off the back of two excellent seasons with Ajax in which he had struck 23 and 24 goals respectively.

Milik was ready to take on Europe's best, ready to humble even the meanest defences in Serie A. He made an impressive start. There was a brace in a 4-2 win over Milan and a match-winning double against Bologna. He also netted three goals in Napoli's first two Champions League group games.

Then came the injuries. The striker tore his anterior cruciate ligament while on international duty with Poland and was ruled out for over four months. Tellingly, he didn't start another league game during the 2016/17 campaign.

The following season was supposed to be different. Milik had trained well throughout the summer and returned to peak fitness. But in September 2017, he tore the ACL in his other knee.

He again returned far quicker than expected and was eased back into the starting XI by now Blues boss Maurizio Sarri. His finished with four goals in his last eight Serie A games. It was a promising sign.

This season Milik has stayed injury free and Napoli have repeated the benefits. He has struck 20 goals in all competitions, 17 of which have come in the Italian top flight. 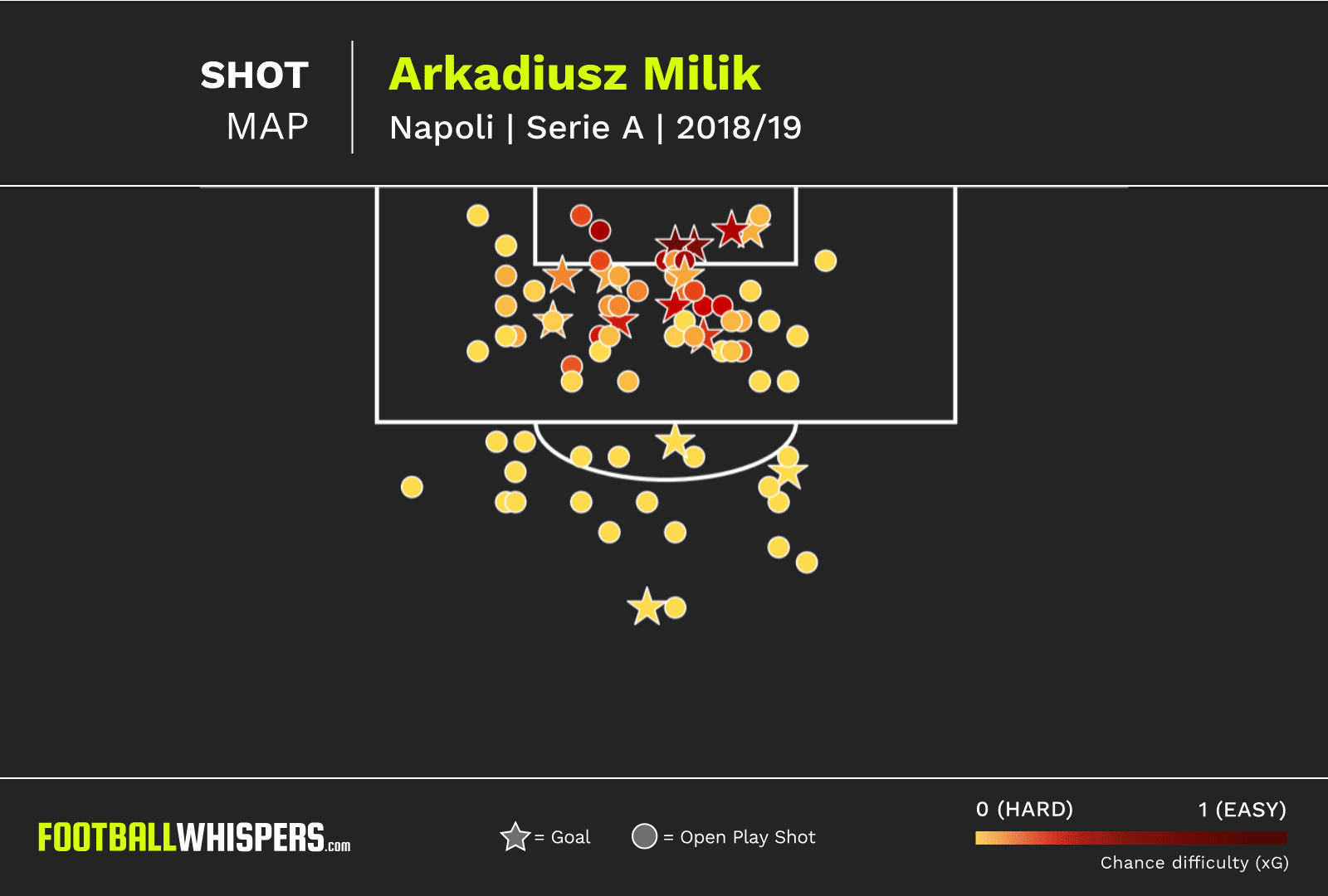 Mobile yet powerful, the left-footed striker has a vast array of finishes in his armoury, which is why his expected goals per 90 of 0.66 can only be bettered by Cristiano Ronaldo in Serie A.

He is built the mould of Diego Costa, minus the short temper. For the right price, and assuming his knee injuries are fully healed, he could be the ideal frontman for the Blues.

Rewind two seasons and the young Dane was being courted by several of Europe's biggest clubs.

Real Madrid, Barcelona, Liverpool, Arsenal and Milan were all interested in the forward who has struck 23 goals during the 2016/17 season and had helped Ajax reach the Europa League final.

Yet Dolberg didn't get his move and the following campaign was one disrupted by injuries and a lack of form. He struck just six Eredivisie goals and the spotlight in Amsterdam moved onto younger teammates in the former of Matthijs de Ligt and Frenkie de Jong.

The 21-year-old missed the start of this season due to injury but returned in September and hit the ground running. He scored six goals in nine games for Ajax but was left out of the starting XI in the Champions League, with Dušan Tadić preferred as a false nine.

Dolberg has drifted out of the starting XI as the season has progressed; Klaas-Jan Huntelaar has usurped him in the Eredivisie side. So why should Chelsea be interested?

Well when the Denmark international is on the pitch, he is still an influence. He is second among strikers in the top flight for shots per 90 (3.95) and, as a result, eighth for goals per 90 (0.69).

He is an intelligent mover with and without the ball, too. Dolberg often drops deep to collect possession, which in turn allows Ajax's wingers to push onto the shoulder of their opposing full-backs, and can also operate in wide areas effectively.

He would also be a cost-effective option given he is not a guaranteed starter for the Eredivisie leaders. Dolberg is not the finished product, his skillset does need honing, and the same could be said for Abraham. Chelsea, if they were to pursue a deal, would have to decide if he's worth the investment.

Undoubtedly the biggest and most high-profile name on this list, Griezmann is expected to leave Atlético Madrid this summer after five years with the club. His options, however, are limited.

Barcelona, who he came close to joining last summer, have moved on to other targets. Juventus now have Ronaldo in their frontline and struggle to accommodate Paulo Dybala. And it's unlikely, albeit not impossible, that Griezmann crosses the divide and joins Real Madrid.

Bayern Munich have been linked, PSG too. But Griezmann has previously admitted he would prefer a switch to the Premier League if he is to leave La Liga. 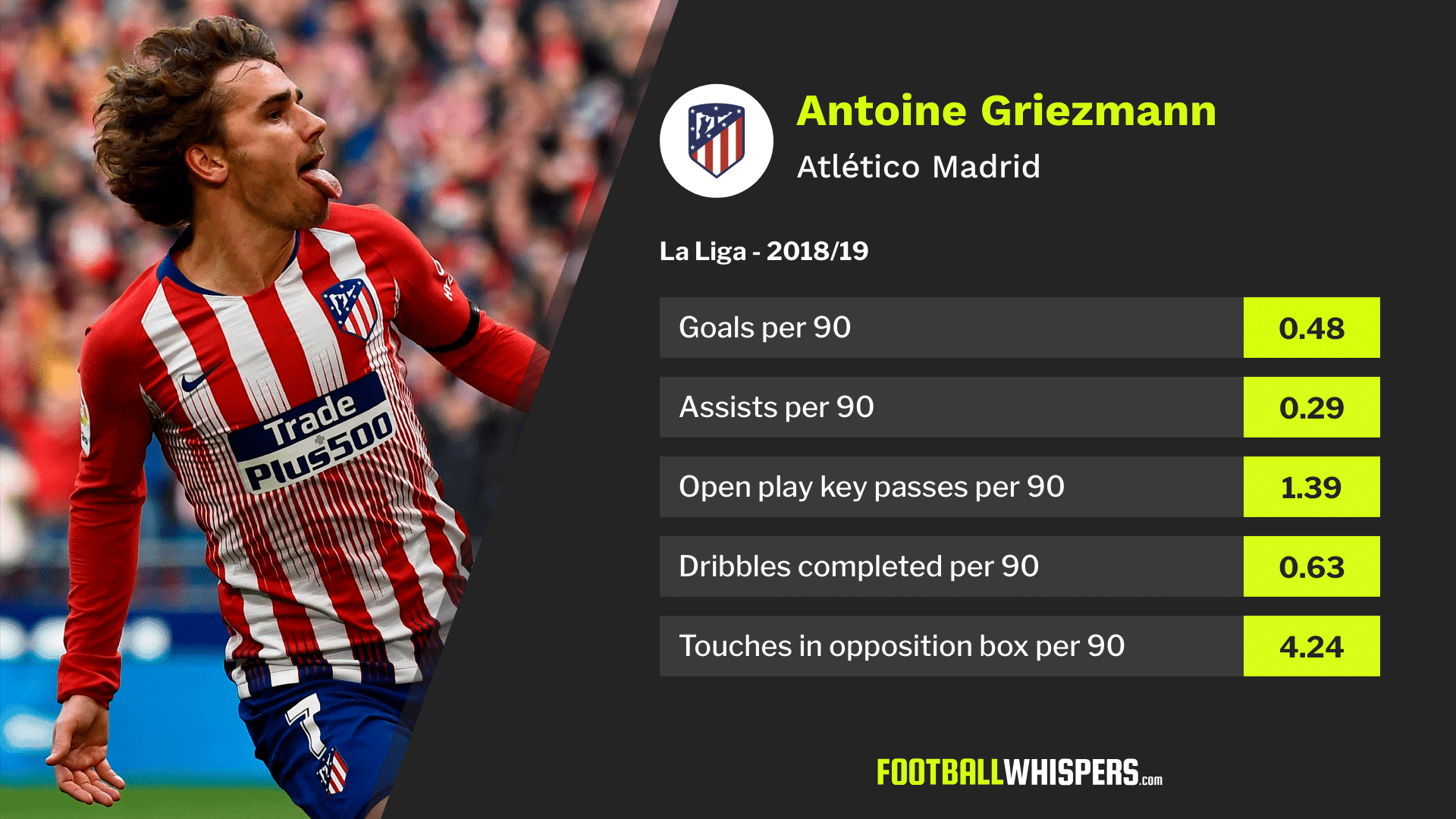 And this summer, thanks to a buyout clause in his contract, he will be available for £100million. In today's vastly inflated transfer market, that is something of a bargain fee.

Griezmann would be an excellent addition to the Chelsea frontline, and would that star quality which would be amiss if Eden Hazard does join Real Madrid as anticipated.

In La Liga this season, Griezmann, who has only recently turned 28 years old, is among the top ten attackers for goals, assists, shots on target, forward passes, open play key passes, successful through balls, crosses completed and successful tackles.

And that is in an Atléti team which is set up to defend and soak up pressure. In a side built to attack, such as Sarri's Chelsea, although that isn't always evident, the France international could be even more devestating.