The Striker Hughes Should Trust To Save Saints | Football Whispers

Struggling in front of goal isn’t a new thing for Southampton.

With Mauricio Pellegrino being a disappointment this season, and eventually losing his job earlier this month, Claude Puel’s time with Saints has been romanticised somewhat.

Under the Frenchman, Southampton scored just 41 goals in the league last season, including only one in their last five home matches.

Those difficulties in the final third carried on this term and Saints netted just 29 times in their 30 Premier League games under Pellegrino before his dismissal.

If Mark Hughes, the Argentine’s replacement, wants to keep the south coast side up, he’ll need to get them firing in front of goal. But who should he pick to do that?

Charlie Austin is back to full fitness and will give the former Stoke City boss another option up top.

He told Southampton’s official website last week: “It's been a frustrating time. It wasn't like being out for two weeks, it's been 14 weeks now.

“I was in such good form and that was the hard thing, because I'd had to bide my time for ages to get in. Whilst that was going on, as a team we were underperforming and that's why we're in the situation we are.

“Now I'm back, we've got a big eight weeks and I'll put all my energy into helping the team drive forward to stay in the Premier League.

“It's good to have that light at the end of the tunnel and this is the last tick in the box. It's great to be back with the lads.” 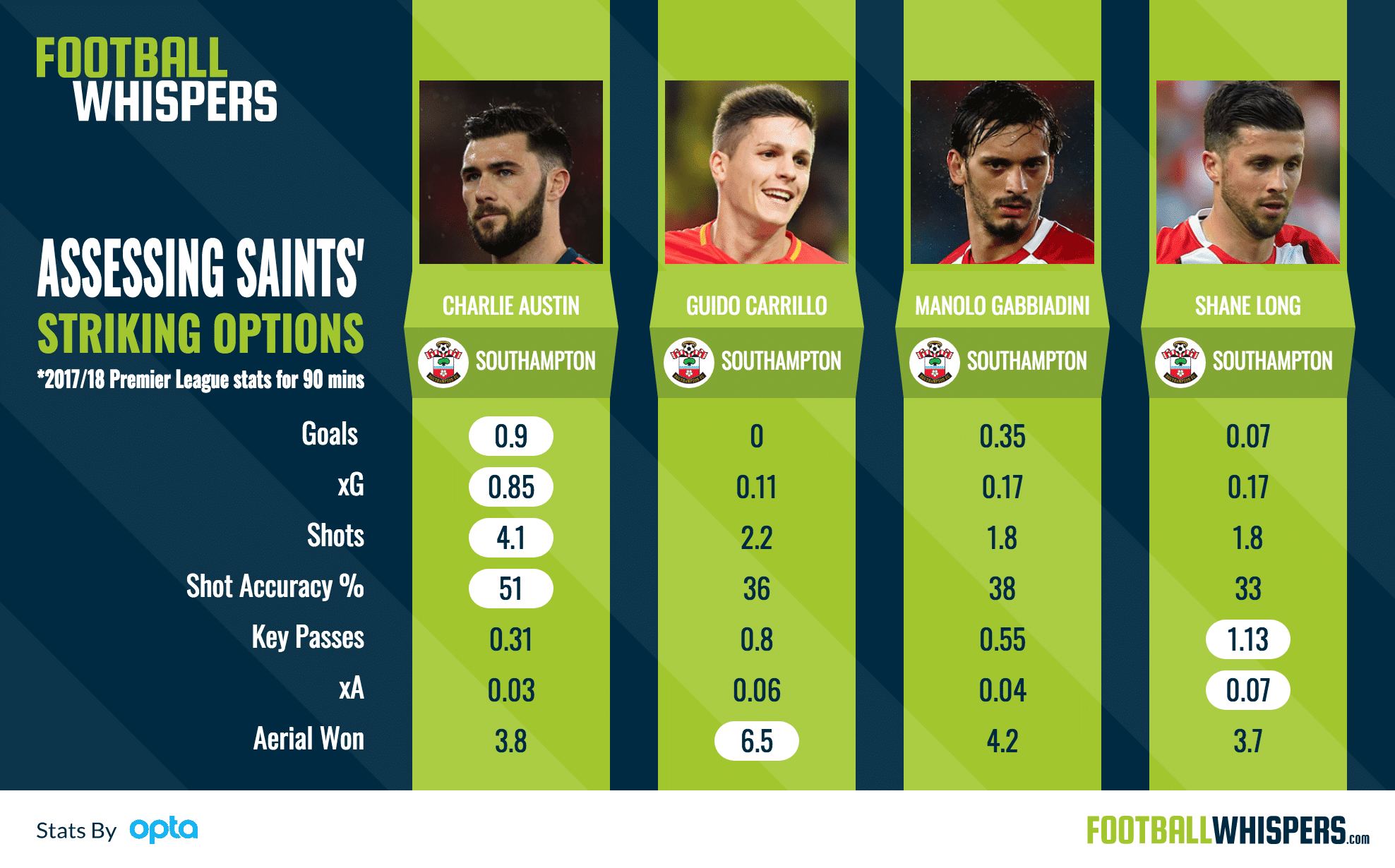 In terms of goalscoring, there is only one winner – Austin. As the graphic above shows, the Englishman leads in goals, xG (expected goals) and shots per 90 minutes. He also has the best shot accuracy.

If Hughes plays with one up front and is looking for a man to put the ball in the net, he’ll have to go with the 28-year-old, especially with Carrillo, Gabbiadini and Long struggling.

But while Pellegrino played a lone striker, Hughes hinted he may go with two up front in his spell with Southampton. Against Wigan Athletic in the FA Cup, Carrillo and Gabbiadini were his front two.

With Long coming out on top in terms of key passes and expected goals assisted, he may be tempted to play the Irishman alongside Austin. But Gabbiadini could also start, holding the second biggest goal threat out of the four options Hughes has at his disposal. It depends what he wants to do.

The stats do show that record signing Carrillo hasn’t had the best time since arriving in January though, and it would be a surprise if Hughes carried on with him up front should he believe Austin is fully fit.