Christmas is always a time to indulge and for Tottenham Hotspur the festive period has been a veritable feast in front of goal.

Games against Everton and Bournemouth have yielded 11 goals after a 6-2 win on Merseyside was followed up with a 5-0 Boxing Day battering of the Cherries.

Unsurprisingly Spurs’ goal tally in the Premier League has swollen to 42 and they have climbed to second in the table after a run of six straight top flight wins – a sequence of results which came on the back of the 4-2 loss to local rivals Arsenal on December 2.

But what has been behind Mauricio Pochettino’s side’s increased appetite for finding the net?

Spurs were by no means goal shy in the months leading up to December, indeed, they scored 23 times in the league before the trip to the Emirates, giving them the fifth best goals per game rate in the English top tier during that time (1.76).

That figure, though, is blown out of the water by the 3.4 goals per match which has seen them score 17 times in the five Premier League games since. This rapid increase in goals has gone hand in hand with new-found clinical edge.

From the start of their most recent winning streak Spurs have had 62 shots at goal in the Premier League and hit the target with 28 (5.23 per outing). When compared with the 68 from 169 shots (2.22 per game) in the earlier part of the campaign, it’s clear to see the North London club are working the keeper far more readily.

The idea that Tottenham have been making much more of their chances in recent weeks is also supported by their expected goals return. Leading up to the defeat at Arsenal, they were a statitisions delight, with their 23 Premier League goals an almost identical match to the 23.13 they were expected to plunder.

In the wake of the defeat at Arsenal, it’s a far more impressive 17 from 6.47 expected goals, which is actually only the 11th best in the Premier League. Spurs are also creating more big chances, with their 2.2 per 90 game up slightly on the 1.84 they managed prior to losing to the Gunners.

Add to the mix a crucial Champions League draw away at Barcelona to secure safe passage to the last 16 and Carabao Cup revenge against Arsenal, and it’s easy to see why Spurs are in confident mood.

While the team stats are improved across the board, football is so often about the individual and, in Son Heung-min, Spurs have a player back to his frightening best. 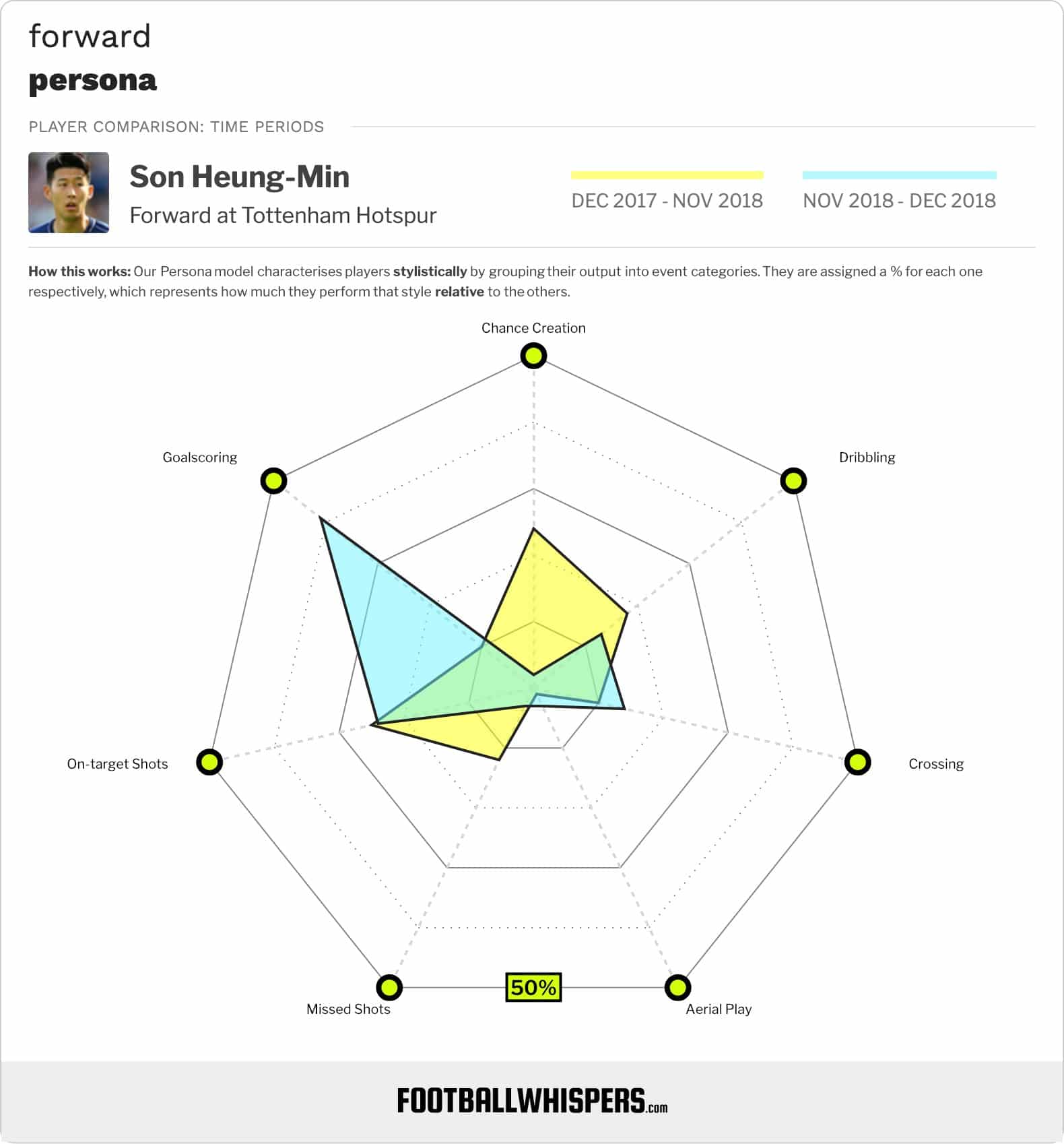 The South Korean had a fragmented start to the campaign due to his involvement at the Asian Games, where beating Japan in the final ensured the forward will avoid having to complete military service in his homeland.

His involvement did, however, have an adverse impact at Spurs, where eight league outings before the start of December yielded 405 minutes and a solitary goal. In stark contrast, 425 minutes of game time have seen Son net six times at a rate of 1.27 goals per 90 minutes this month alone.

The No. 7 has followed the theme set out by the rest of the Tottenham side by scoring well beyond the 2.12 goals he has been expected to provide during December.

The 26-year-old’s two league assists is second only to Kyle Walker-Peters’ three and he is out on his own in every single expected goal and assist stat going for Spurs this month.

With Son back on song and many others contributing to the goal getting, the strain on Harry Kane to be Spurs’ main man has lifted somewhat.

The England captain is still of huge importance to Spurs, but is now part of an attacking unit which is firing on all cylinders.

Along with Son, Kane is one of five Spurs players to register in the Premier League since the loss at Arsenal, with Christian Eriksen (three), Dele Alli (two) and Lucas Moura (two) adding to the South Korean’s four efforts.

Having so many players hitting their stride at once gives Pochettino a squad blessed with goals and creativity, and it is little surprise, therefore, to see Spurs enjoying plenty of festive cheer.