It isn’t often Celtic challenge Juventus in the transfer market. The two giants of their respective leagues operate in different stratospheres when it comes to transfers but are now on a collision course, with both eyeing up a move for Partizan Belgrade centre-back Strahinja Pavlović.

The 18-year-old was previously linked with a £4.5million switch to Turin but reports have eased off with the Serie A juggernauts now giving Romelu Lukaku their full attention.

A move has opened up for Celtic and the Bhoys are making the most of this opportunity with manager Neil Lennon travelling to Rhyl to scout the teenager in person. He watched on as Pavlović impressed during Partizan’s victory over Connah’s Quay Nomads in the Europa League.

The player is aware of the interest, too: “I was flattered when I heard about Celtic watching me in Wales. But for me I have to only concentrate on my immediate future and that's at Partizan.

“I've got to think I will be at this club for a long time. I can't afford to get caught up in speculation before the next transfer window. My favourite clubs in Europe are Real Madrid, Juventus and Manchester United. My ambition is to play for one of those teams one day.

“But I'm only concentrating on the second leg against Connah's Quay Nomads. I think it's a good opportunity for our fans to see a few goals from us.”

If Pavlović wants his dreams to become a reality he's going to have to prove himself outside of Serbia. Celtic is the perfect environment for him to flourish as well as being the ideal shop window.

While the Hoops aren't in dire need of a centre-back, with Jack Hendry, Kristoffer Ajer, Christopher Jullien and Jozo Šimunović available to Lennon, having successors on the books for any potential sale is always a wise move.

Furthermore, if Pavlović's performances to date are anything to go off he has a higher ceiling than all of those aforementioned defenders. 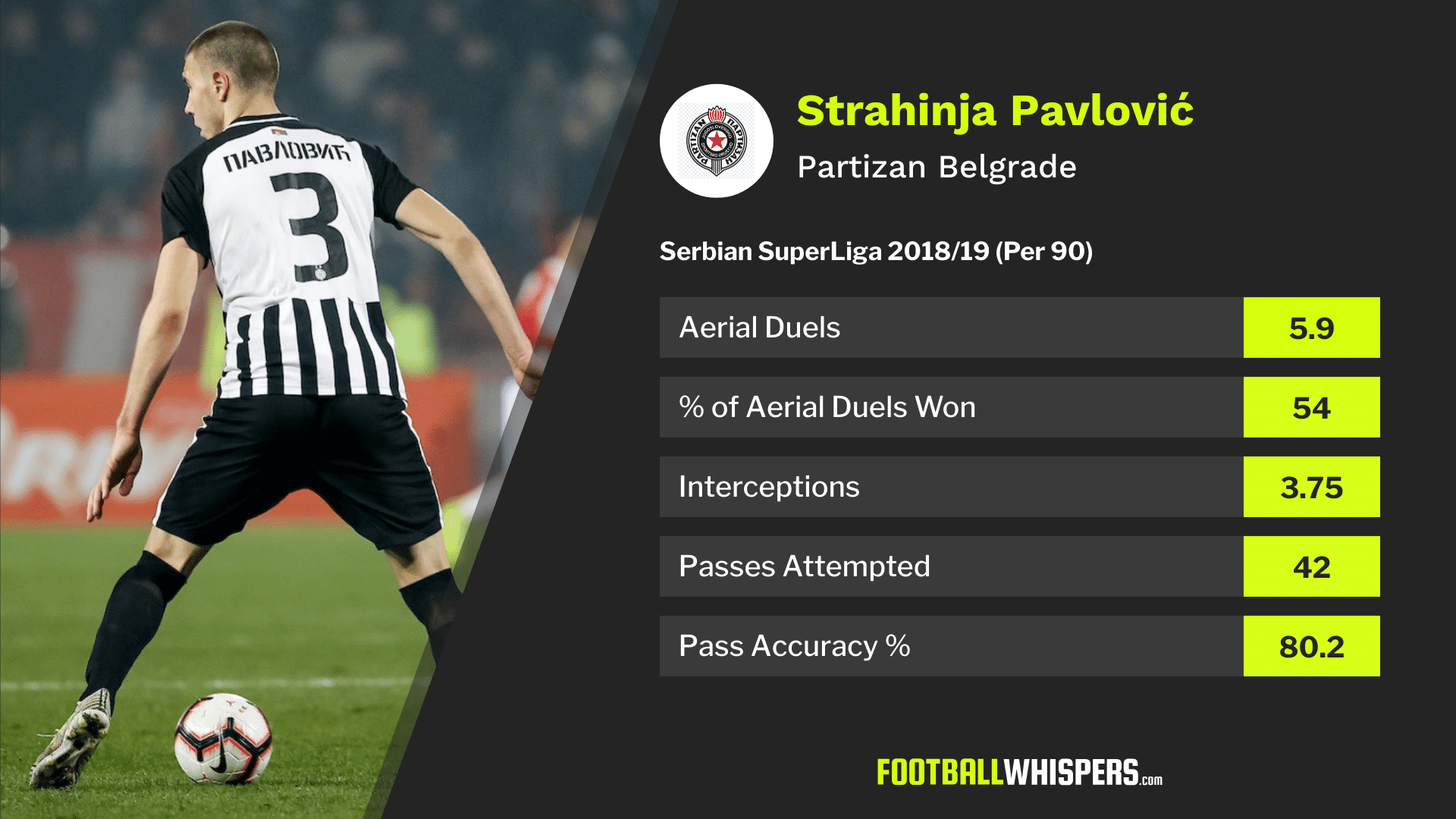 The hype around Pavlović may seem premature given he's only appeared in 12 Serbian SuperLiga matches but sometimes talent is evident from the off and the sample size just isn't as important as it usually is.

On a per 90 basis, the youngster is challenging for close to six aerial duels and he's winning over 50 per cent of them. He puts his 6ft 3ins frame to good use and if tasked with being the aggressor in the air you'd likely see those figures spike.

He's adept at reading the game, winning three interceptions per 90, a stat which highlights he is proactive in his defending.

Instead of waiting for the play to come to him, he presses and wins the ball. It's a very forward-thinking approach and it fits in well with the way modern-day defenders style themselves.

The 18-year-old is also used to seeing a lot of the ball, averaging 42 passes per 90, but he is going to have to improve his distribution. His pass accuracy is a little over 80 per cent which, for context, is significantly less than what Jullien averaged for Toulouse last term (89 per cent).

However, those passing numbers are heavily influenced by the style adopted by the team. For example, long balls are less likely to be accurate but if a team is more direct then they're going to encourage those sorts of passes.

Pavlović is a progressive ball-player. He carries it out from deep areas and tends to look to make passes into the feet of the attackers.

He's deceptively good in possession. Often looking a little shakey, he manages to wriggle out of situations and free himself from a press to help start attacks. It's an invaluable trait to have and one that many teams would welcome in their backline.

If reports are accurate, Partizan are open to selling the talented teen and though £4.5million is steep for a largely untested teenager, it could well be a wise investment.

Pavlović could the shrewdest signing the club has made since Virgil van Dijk.